Unless you’ve been living under a rock for the past year, chances are you’ll be aware of the national phenomenon that is Love Island – AKA the reality show to end all reality shows. The ITV2 programme is in fact a reboot of the failed noughties reality show of the same name, which involved plonking Z-list celebs like Calum Best (famous for being the son of football legend George Best) and former Playboy Bunny Colleen Shannon on an island in Fiji, and waiting for the sparks to fly.

Relaunched in 2015, the show has swapped Fiji for Mallorca and semi-celebs for a group of fame hungry 20-somethings who sign up to spend two months of their summer living together in a villa. The name of the game? To find their one true love, of course. Oh, and to get their hands on the £50,000 prize given to the winning couple.

Things start out innocently enough, with the original line-up of islanders having to couple up with each other. But as new islanders are introduced and everyone desperately tries to avoid being dumped from the island, some couples are brought closer together, while others inevitably hit rockier ground. Meanwhile, their antics are being filmed 24-hours a day by the 70-odd cameras placed strategically around the villa, and broadcast to a baying crowd of trash TV fans back home.

The show has become cult viewing for Brits since it relaunched, but 2018 was the year that saw everyone and their gran excitedly park themselves on the sofa every night to tune into the antics of Danny Dyer’s daughter (also called Dani) and co. The show’s finale in July attracted a peak audience of more than four million Britons, and was officially the most talked about TV show on social this year, boasting more than six million tweets.

Unexpected fans include everyone from the former Chancellor George Osborne to rapper Stormzy, who even made a brief cameo appearance via Skype in one of the previous series. The show has also become a successful international export, with the format so far sold to countries including Germany, Australia and the US.

The secret to Love Island’s success where countless other reality shows have failed arguably comes down to its carefully calculated formula of sun, sea and – of course – sex. But none of this would be possible without the all-important villa, where every detail of the drama plays out. As the show’s popularity has increased over the last three years, so to has the level of thought and design detail that goes into bringing the villa to life. “In series one we found the location and then the show very much grew around that. Since then, as we’ve become more confident and known more about what the show needs to be, it’s grown and grown,” says Executive Producer Andy Cadman, who has worked on the programme since the beginning.

The last two series have taken place in a new villa located in the hills of Sant Llorenc des Cardassar in Mallorca, which ITV rents from its German millionaire owner for the duration of the show. Now that it has become larger in scale, the set build takes roughly six weeks from start to finish, and the villa needs to returned exactly as it was found once the show finishes. What is required to ensure that it looks and feels like the spiritual home of Love Island, however, remains the same.

“The brief has essentially always been to make the villa feel as attractive [as possible] to that 16-24 year-old audience,” says Production Designer Mat Weekes, who has also worked on the show since series one. “Before we start any work it is a beautiful place to be, but it was designed in more of a classical way which would appeal to an older age group, so we’re always trying to freshen it up.”

Me: "I don't care what people think of me.” Also me: ☝️#LoveIsland

Aside from the villa being somewhere viewers would want to spend their summer, crucially it also needs to feel like home for the new batch of islanders who have actually committed to spending two months of their lives living in it. “A very important point for us is always to make all of the television and technical infrastructure drop away. We always want to take it that bit further so that it reads true physically standing in the space, rather than just what you see on camera.” says Weekes.

Over the last four seasons, some of the villa’s key design elements have become much-loved features of the show. The Beach Hut (Love Island’s answer to the Big Brother Diary Room) for instance, has remained largely unchanged since series one, retaining its simple plank-effect walls and beach scene backdrop. The same goes for the fire pit in the garden, which has become the site of the show’s notorious dumping ceremonies but was originally designed with more practical intentions. “We were thinking about different seating areas and needed one that would be warm enough for them to sit around at night, but actually it has become way more dramatic and integral to the show than we ever thought it could be,” says Cadman.

Other features are completely redesigned every year, such as the Hideaway, where a select few islanders are allowed to spend a night alone in their couples at various points during the show. “That’s one of those things where we’ve always said we’ll change it each year, because you want somewhere that the islanders can escape to from the madness of the main villa, and get some time alone with that person they want to spend time alone with,” says Cadman.

This year, one of Weekes’ main aims was to create a more fluid transition between outdoors and indoors. The production team has always opted to use artificial plants and astroturf outside, given that the islanders are more likely to be preening themselves than the villa’s foliage. But this was the first year where they decided to bring these features inside as well, creating a series of indoor ‘living walls’. The garden’s brightly coloured LED lights were also carried through to the interiors, while a photo of the villa’s swimming pool became the backdrop for the headboards in the islanders’ super-sized bedroom. “Our focus for this summer was developing inside a bit more so that both spaces felt like they belonged to each other, and the entire environment felt a bit more joined up,” he says.

However Weekes’ team decides to mix up or retain different elements of the villa each series, its design is intrinsically linked to how the show’s producers want its politics to play out. Moving the kitchen outside in series two, for instance, allowed them to get the islanders to spend more time outdoors (having more skin on show is a no-brainer when it comes to viewing figures). The outdoor gym has also played a much more prominent role over the last couple of series, as islanders have increasingly taken to “peacocking” in front of potential love interests, says Weekes.

Making sure that there are enough seating areas strategically placed around the villa also gives islanders ample opportunity to ‘crack on’ with the person they’re interested in, hatch up plans to sabotage other couples, or simply have a good old bitch about someone. “All of the design is informed by the editorial,” says Cadman. “We consider everything, from the angle of the swing seat to make it feel like you’ve got separation from the rest of the villa and can have a private conversation … to pulling the seating area in the corner forward to bring it into the centre of the garden, and create more of an area where you can see and be seen.” 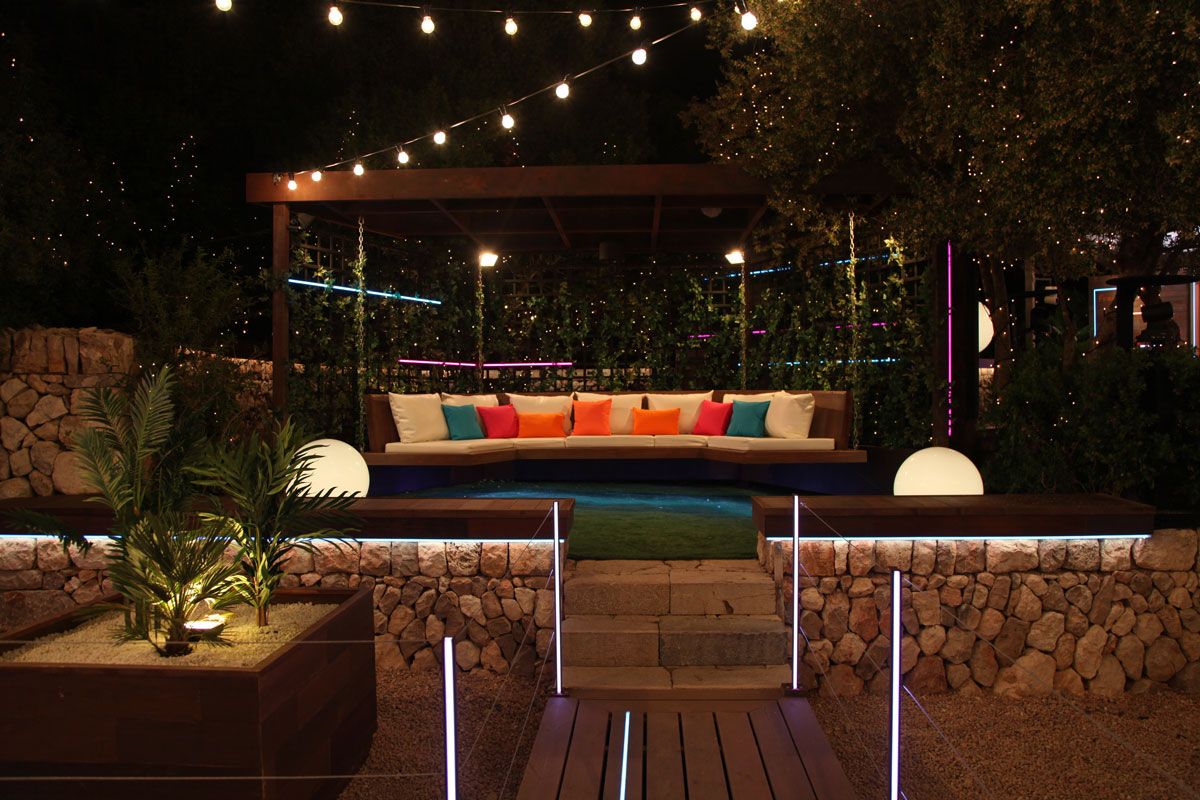 Most important of all for Weekes and his team is making the experience of the villa as believable as possible for both the islanders themselves and the viewers back home. “We’re more in favour of incremental changes rather than massive wholesale changes,” he says. “We don’t want it to feel contrived … in the way that Big Brother changed every series and yet it was in the same house each time, so you instantly knew it was a television set. We want everything to feel architecturally sincere and the viewer to believe that’s just part of the villa, rather than something we’ve put in to make our show work.”

Going forward, retaining that authenticity will be vital to maintaining Love Island’s success amid a sea of failed trash TV shows. “I’ve worked on lots of really big reality shows, [including] Big Brother. You can always see the cracks, and I think on this you can’t see the cracks,” says Cadman. “The production design on Love Island means that even when you’re stood on set, you don’t feel like you’re stood on a set. You could quite easily take all the cameras out and have the best holiday of your life.” 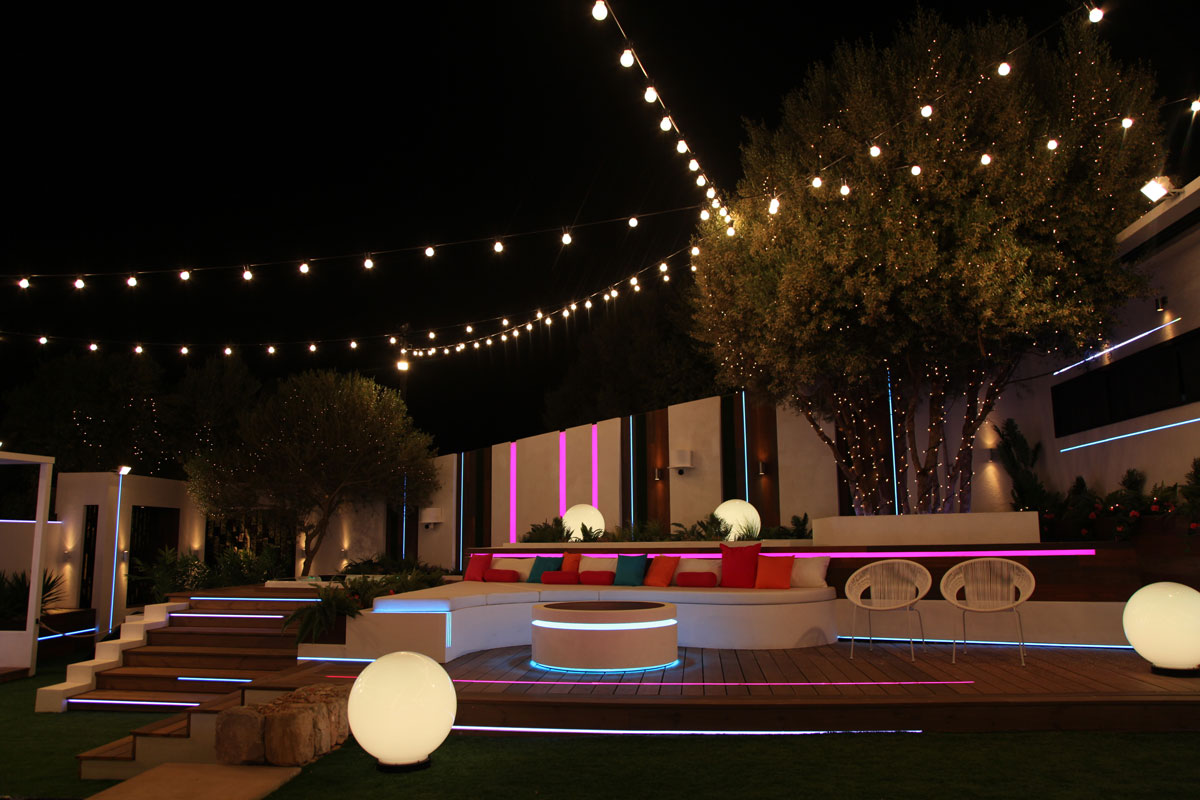