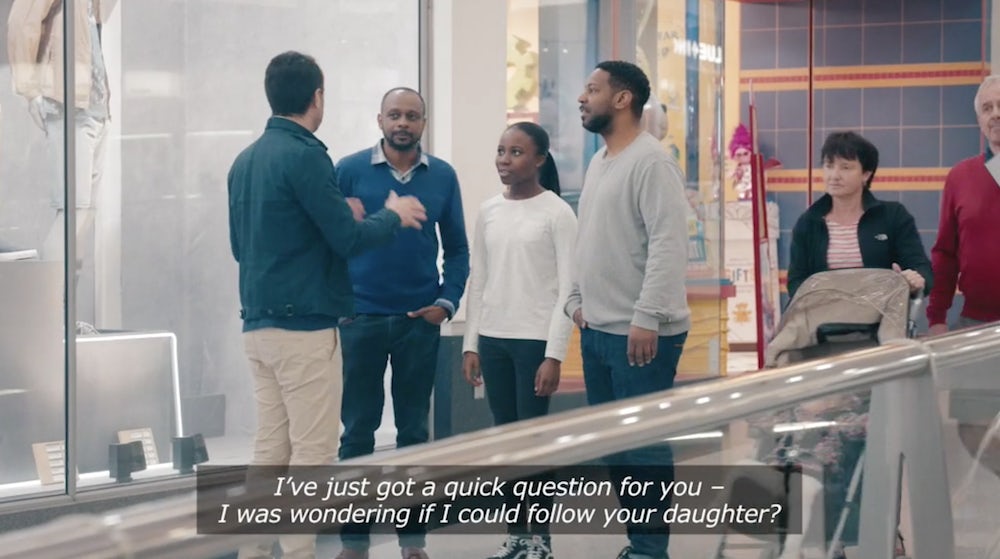 What would you do if a stranger approached you in the street and asked to follow your son or daughter? FCB Inferno’s new ad for children’s charity Barnardo’s shows four families being approached by a man who appears to know a worrying amount about their child. “Could I be friends with your kids please?… We share a lot of the same images … we like the same music … we live in a similar area,” he asks.

The ad is extremely uncomfortable to watch – parents are understandably horrified – and that’s precisely the point. Having someone ask to follow you is perfectly normal in the context of Twitter or Instagram but it’s disturbing to hear these words used in the real world.

The film was directed by Ben Woolf. Barnardo’s wanted to make an ad that would encourage parents to talk to their children about online safety and the dangers of accepting requests from strangers on social media. Preventing child sexual exploitation is one of Barnardo’s key areas of work and the charity has seen a 38% increase in the number of people using its CSE services over the past year. “The virtual world can bring these dangers inside the home, which should be a place of safety. Talking can help keep children and young people safer,” says Nick Gammage, Barnardo’s Director of Policy and Communications.

FCB Inferno couldn’t approach real families so used actors instead. But the film wasn’t entirely staged. Actors were asked to walk through a shopping centre and told someone would approach them but were not told what that person might say.

“We told them, ‘You’re walking through a shopping centre and you are the parent of this child. Something will happen and we need you to react like you would do as a parent’ and that was it,” explains Owen Lee, Chief Creative Officer at FCB Inferno. “We deliberately kept [instructions] as vague as possible otherwise we wouldn’t have got such genuine reactions.”

The film is designed to leave viewers wondering whether or not it was real. Actors’ responses feel genuine and Lee says most interactions were shot in one take. “What I like about the film is how it doesn’t feel massively over the top. It feels very British in the way that people react. They want to be fairly decent and civil but then they realise that what this stranger is asking them is completely inappropriate,” he adds.

FCB Inferno describes the ad as a ‘social experiment’. “Traditional commercials end with a big reveal whereas with this, you’ve kind of got the game within the first five seconds, and then you’re watching because you want to know how it plays out and how people are going to react. It’s almost voyeuristic in a way,” explains Lee.

The film avoids the traditional shock tactics often seen in charity advertising. There are no hard hitting statistics or explicit warnings about the dangers of talking to strangers online. Instead, the social experiment style approach encourages viewers to empathise with parents on screen and think about how they might react in the same situation.

“Shock is great for raising awareness but it’s not fantastic for [provoking] empathy or understanding and it’s not great for driving behavioural change,” explains Lee. “What happens is that people [see something shocking] and think ‘oh God that’s awful’ but they don’t do anything about it. Social experiments make them think about their own behaviour and think ‘perhaps I’m letting my child do something I shouldn’t’.”

Words like friends and followers are used without a second thought on social media – “those words are so evocative and that’s why they were chosen by social media sites,” says Lee – but the film urges people to think about the real-world implications of accepting a friend or follower request from a stranger. It also highlights just how much information strangers can find out about children from looking at the content they share or the people they follow. Lee hopes it will provoke discussions among parents and children and open up “a wider conversation” about keeping children safe online.

Barnardo’s has set up a web page with advice for parents and carers – see barnardos.org.uk/followme for more information.