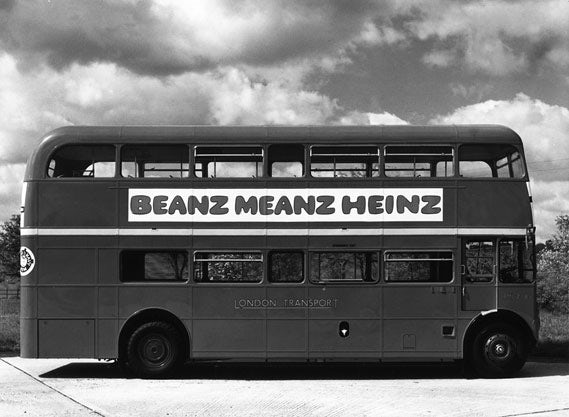 In at number one in our top 20 slogans is a line so successful that it has endured for over 40 years. ‘Beanz Meanz Heinz’ was penned in 1967, not in one of the agency ‘brainstorming’ rooms that are deemed to be so conducive to original thought today, but in a London pub. The writer behind the line, Maurice Drake, recalls the day it came to him: “I was a creative man in advertising [in the late 60s] at Young & Rubicam. Heinz baked beans was one of our products and they were looking for a new campaign. The problem was that if you owned a FMCG [fast-moving consumer good] – and a famous one at that – it would be copied by the big supermarkets and sold cheaper than your product as they had less overheads and so on. And this was a very hard thing to combat, so Heinz felt we should point out that they were the original and best. But saying that is not easy as it’s a bit hackneyed.

“We tried all sorts of things for a month or so,” he recalls. “We were a bit stuck so, as I was the head of the group, I took the team down to The Victoria, behind the agency in Mornington Crescent, where we sat around with beer and sandwiches.”

Thus fuelled, inspiration soon struck. “I had my layout pad with me and, fiddling with it, came up with ‘Beanz Meanz Heinz’,” Drake says. Not only did he invent the great line, but “I also came up with the jingle ‘A million housewives every day, open a can of beans and say Beanz Meanz Heinz’.”

Whatever they were serving in The Victoria that day, it certainly did the trick but, Drake adds, “Although I thought of it in the pub, there was at least two or three months’ cogitation prior to the eureka moment. We knew we had a breakthrough when we were able to produce a poster that didn’t mention the brand, it simply said Beanz Meanz [against a product shot].”

Variations of the ‘Beanz Meanz Heinz’ slogan have been used over the years, such as ‘Don’t be mean with the beans Mum, Beanz Meanz Heinz’. Highlights among the many commercials using the line include a 1970s series featuring children reciting poems about the stuff and a 1986 ad in which a little boy asks his clever older brother Kev why he likes them. Kev then takes his brother’s fork and proceeds to tell him exactly why, pausing in between each point to eat a forkful of beans. The ad ends with the jingle: ‘Nothing tastes quite like them, Beanz Meanz Heinz’.

More recently, the enduring appeal of the slogan was underlined when, in 2004, even though it was not being used as an advertising strapline at the time, Heinz changed its packaging simply to say Heinz Beanz.

And then, in February 2009, the slogan made a triumphant comeback courtesy of Heinz’s agency at the time, AMV BBDO. A new TV spot featured a poem read by a little boy while a montage of clips from Heinz beans ads from years gone by played out.

As soon as I get home from school
I ask Mum ‘what’s for tea?’
And hope that she says Heinz Baked Beans
’Cos they’re the beans for me

Now retired, Maurice Drake was delighted to see the return of the slogan he dreamed up one afternoon over two pints of bitter in The Victoria all those years ago: “I still find it incredible that, over 40 years later, the seemingly timeless ‘Beanz Meanz Heinz’ slogan continues to have relevance and brand power, still appealing to different generations in an ever-changing world,” he says.

How I Got Here: Fraser Muggeridge

How influencers can help brands create positive content during Covid-19