Nick Dwyer started drawing labels for Beavertown Brewery not long after graduating from Central Saint Martins, where he’d studied illustration. At the time he was working as a waiter and filling sketchbooks with drawings in the spare moments he had around shifts. Originally, Beavertown Brewery founder Logan Plant had wanted to bring in a rotating band of local artists to design beer labels, but Dwyer drew two and ended up taking on more and more of them as the brewery grew in size. He didn’t realise at the time, but those initial illustrations – which included the now iconic Gamma Ray – would set the tone for the entire Beavertown brand identity.

It’s come a long way in the eight years since it was founded, not least of all getting the attention of Heineken – which bought a minority stake in the company in 2018 to fund Beaverworld, the 129,000 sq ft brewery it’s constructing on the site of a former light bulb factory in Tottenham. However Dwyer still recalls the early days of the company clearly.

“I remember we were working in Hackney Wick, and at this point it was really ramshackle,” he told CR. “People were packing bottles over there, and I was working on a chaise longue we found in a skip and sharing it with our sales manager. Our table was a bit of glass over some kegs.” 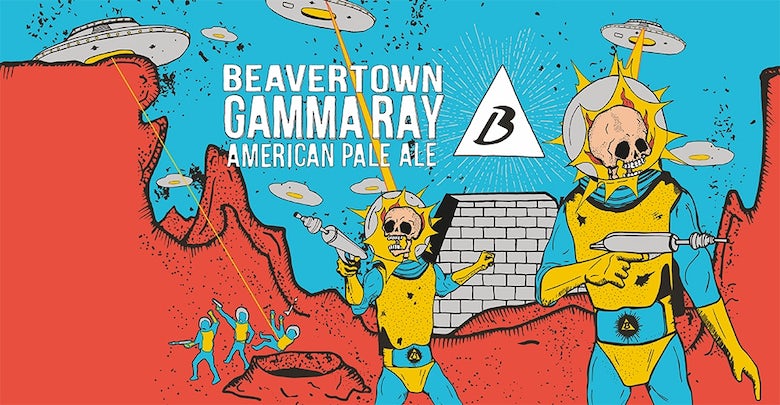 Despite these humble origins, Beavertown quickly grew to become a leader in the craft beer scene, which can be attributed in no small part to its psychedelic, illustrated labels. As Dwyer says, “Sticking spacemen, skeletons, skulls and weird shit exploding on cans was something unexpected” – especially when you consider the relatively staid branding of beer bottles and cans a decade ago. The influence of these on the craft beer market is undeniable, helping to usher in a new era of beer branding. Head into any bottle shop now and you’ll see rows of rainbow-coloured cans from other craft beer names.