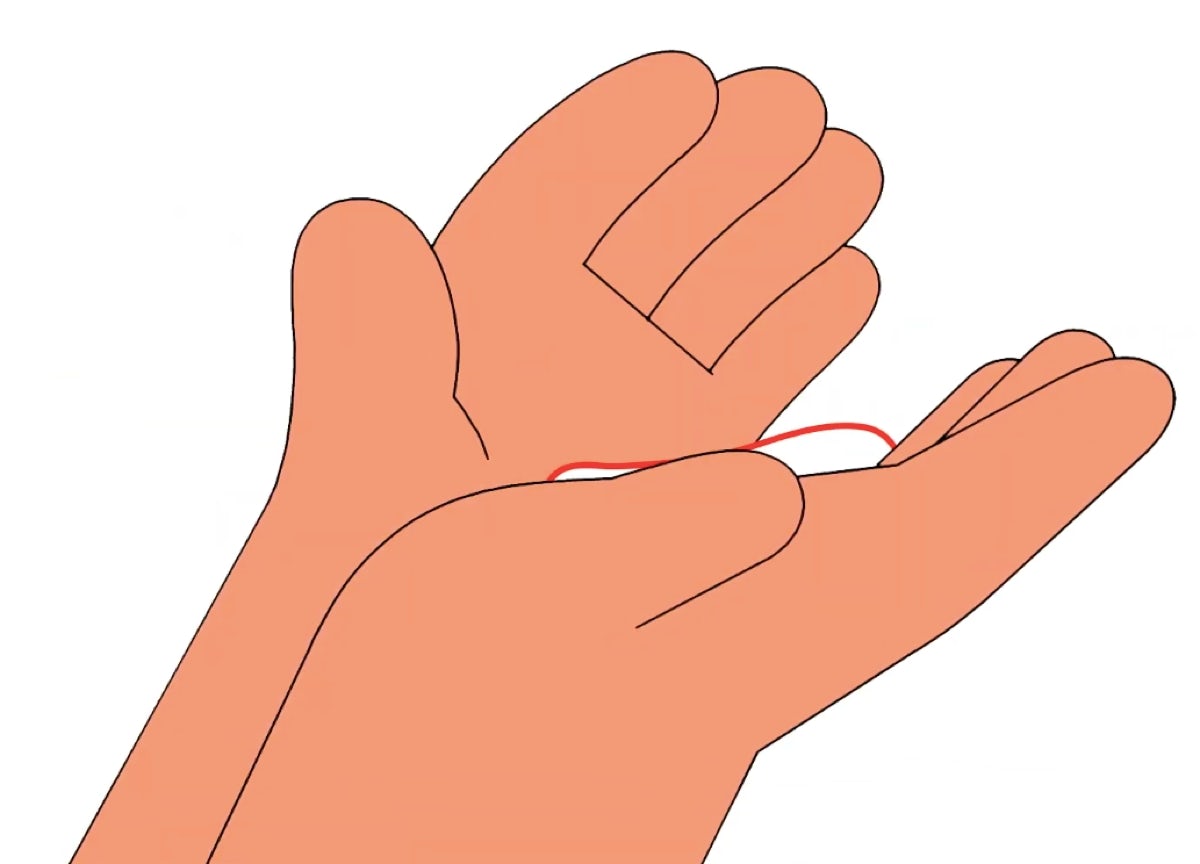 Thanks to coronavirus, a new creative category is on the rise – hand sanitiser advertising. As more and more of us stash bottles in our bags, brands are going to be under increasing pressure to get noticed in a crowded category. So it makes sense that both Dettol and Lifebuoy have invested in major ad campaigns, but it’s interesting to note the different directions each has taken.

First up, Lifebuoy’s Bish, Bash, Bosh campaign by Mullenlowe, which comprises a flm and outdoor ads with illustrations by Dan Woodger.

It’s fun, and God knows we all need some of that after months of frightening news and warning notices about social distancing. Making hand sanitiser playful and engaging must have been a tough brief, but Mullenlowe and Woodger have pulled it off in impressive fashion.

The illustrations are punchy, and work as well as static outdoor ads as they do in a gross-out animation that reminds us why we all need sanitiser in the first place. 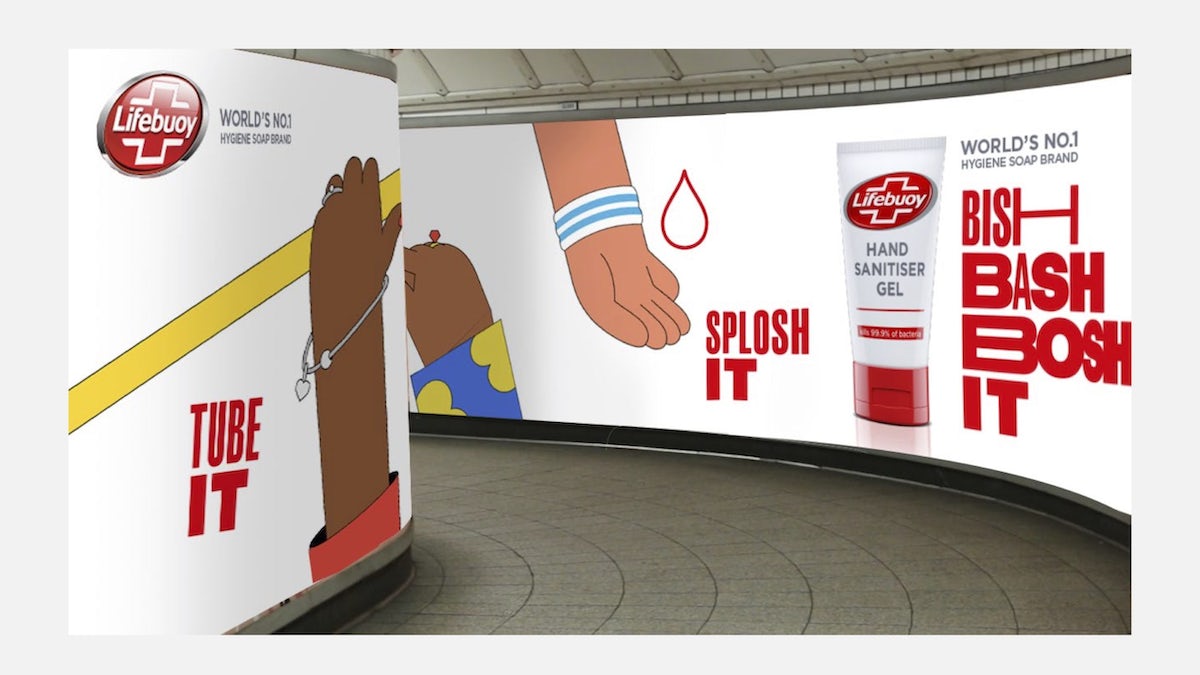 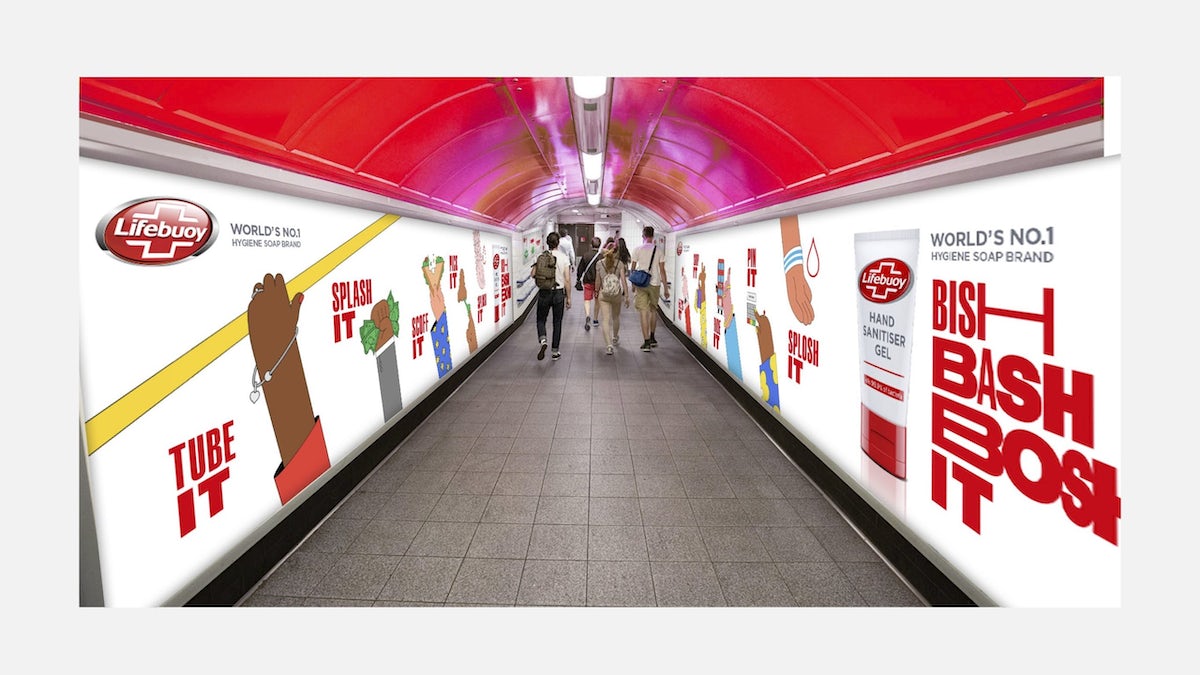 Somehow, it’s not the visual approach you’d expect from hand sanitiser, and maybe that’s what makes it work. As @clairestrickett comments: “It’s a real treat to be around advertising that feels so distinctive and graphic-led.” Others have reacted positively to the onomatopoeic tagline.

“Tube it splosh it is a glorious joyful thing, that both nails and pokes fun at the whole public health messaging genre,” writes @nickparker. “The Lifebuoy stuff reminds me of Australia’s Slip Slop Slap ads of the 1980s. It’s still a mantra today. This shit just works,” adds @Kingsgrove.

If there’s criticism to be made, it’s that Lifebuoy has been slightly heavy-handed with its use of type, but this can perhaps be forgiven in the context of Woodger’s illustrations.

Next up is Dettol’s Keep Protecting campaign by McCann Worldgroup UK, which takes a different approach, playing on people’s sense of civic duty –  highlighting that we need to be mindful in order to keep everyone else safe.

It does this by paying homage to the small rituals that made up our everyday lives pre-Covid, in a series of posters as well as longform ads that are receiving mixed reactions online. 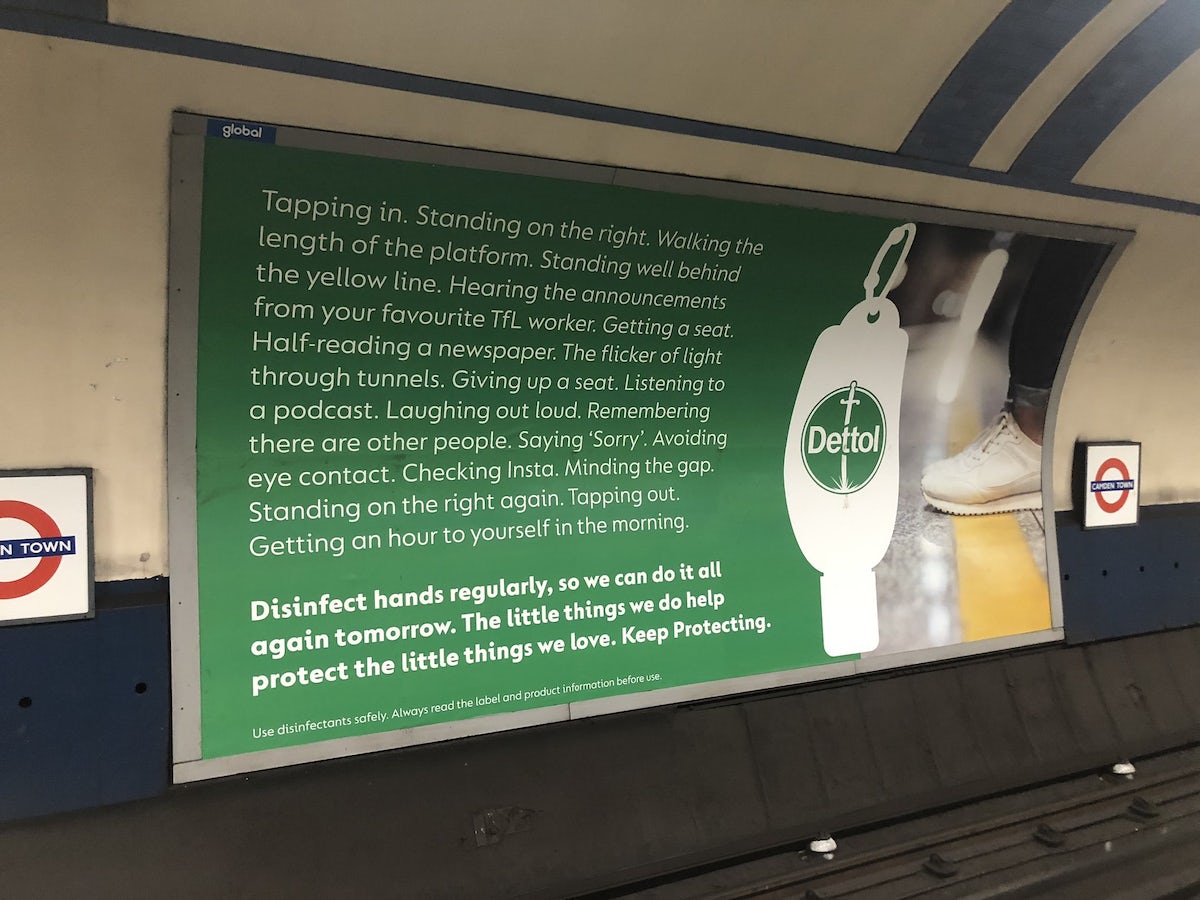 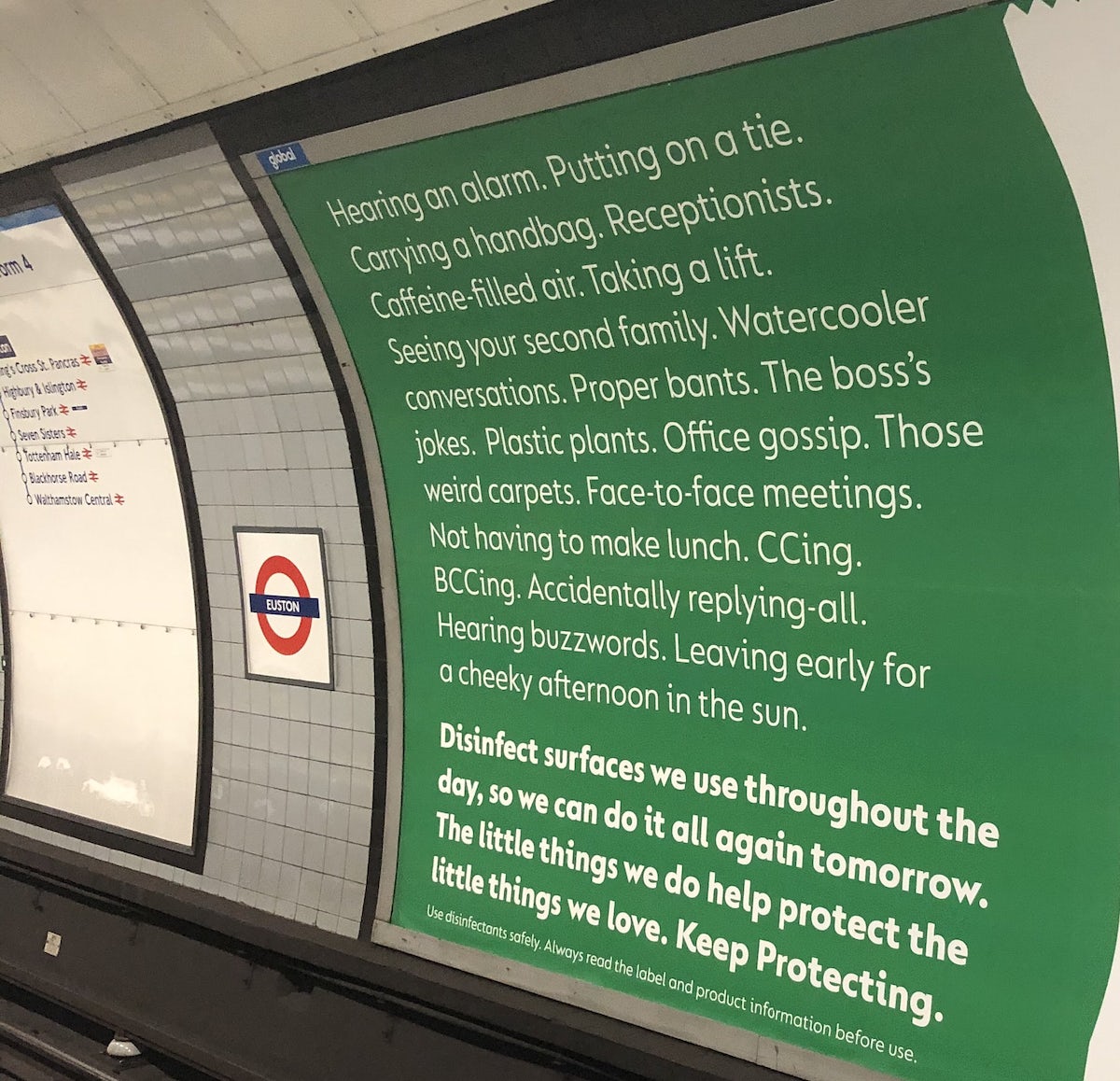 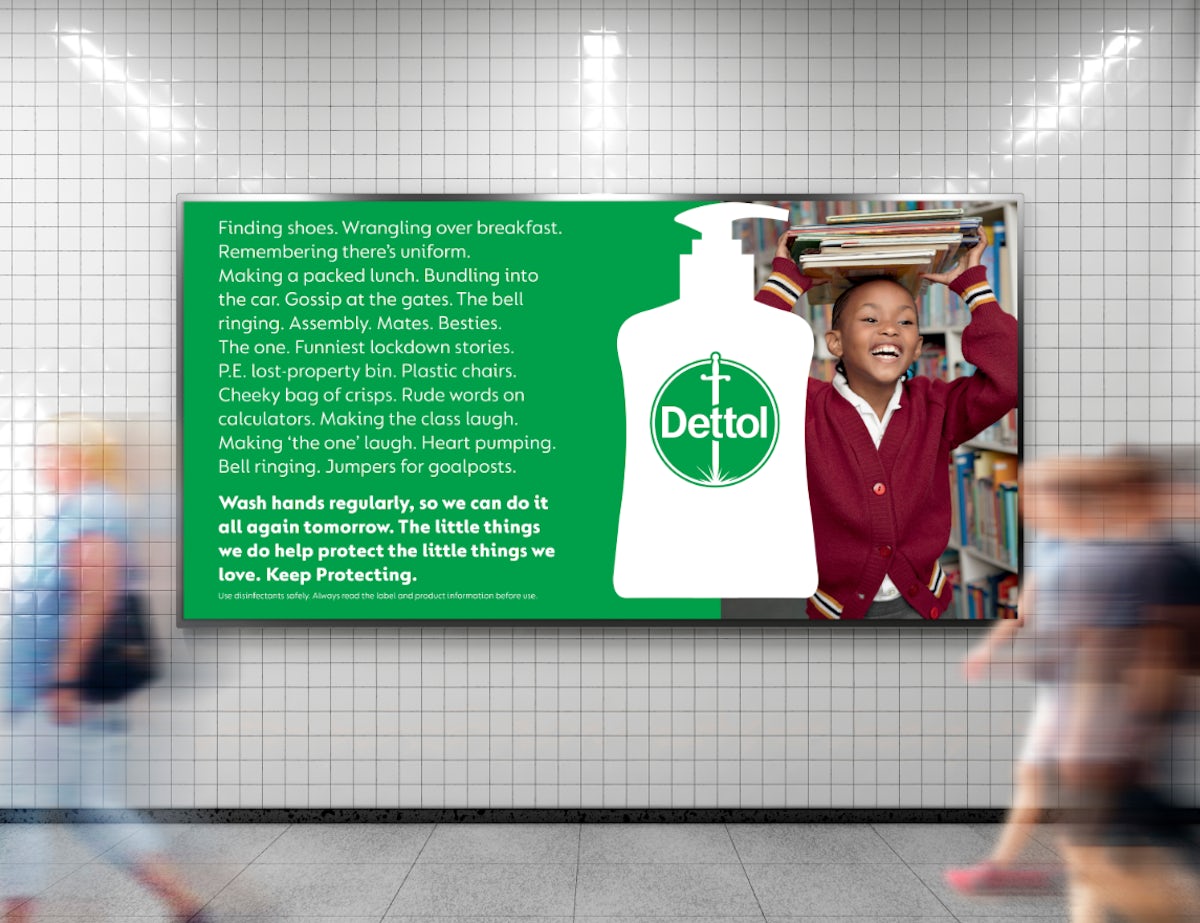 It’s hard to get longform right and, arguably, in this case, Dettol hasn’t succeeded. Perhaps it’s because of an unavoidable similarity to Irvine Welsh’s Trainspotting speech.

Or perhaps it’s because of the deeply mundane set of thing Dettol thinks we’re all desperate to get back to which includes ‘the boss’s jokes, ‘proper bants’, standing on the right and putting on a tie’ – as if it’s not bleak enough that we need to buy hand sanitiser in the first place.

What kind of mole man psychopath actually enjoys the tube

The ads are prompting ridicule on social, with reactions including, “What kind of mole man psychopath actually enjoys the tube,” from @JimMFelton, to, “Could use some Dettol for my eyes” from @TobyHolleran.

Others have opted to create their own spoof versions of the campaign, which only emphasise where Dettol went wrong with its pro-back-to-the-office stance.

I thought that tube ad was spot on, personally. pic.twitter.com/ko0B2L8YTe

Even Trainspotting author Irvine Welsh has picked up on the campaign and commented in his usual incisive fashion.

It’s entirely possible this memeification might ultimately work in Dettol’s favour, when it comes to spreading awareness, but the ads themselves still feel like someone at the ad agency didn’t read the room.

Judging from these ads alone – for what is surely only the beginning of a wave of Covid-related products that will be flogged to us in the coming months – taking a simple and light-hearted, rather than earnest, approach to the topic is what we all want right now.