We’ve all been there. You’re visiting a country for the first time, wandering about aimlessly with your sun cream and camera in hand, and not a care in the world. But all of a sudden you find yourself being herded along with the rest of the cattle posing as holidaymakers into what is commonly known as a tourist trap. You get a random person to take an out-of-focus photo of you in front of a non-descript historical statue, and you leave with little else other than a tacky souvenir and the bitter taste of disappointment in your mouth.

Documentary photographer Laurence Stephens has been highlighting the beauty in the mundanity of holidaying since 2015, when he started his aptly named photo series Bored Tourists, which is now being published in book form by Hoxton Mini Press. The idea for the project came shortly after Stephens moved to Barcelona, when he made a day trip to the city’s famous cathedral – AKA tourist trap central. 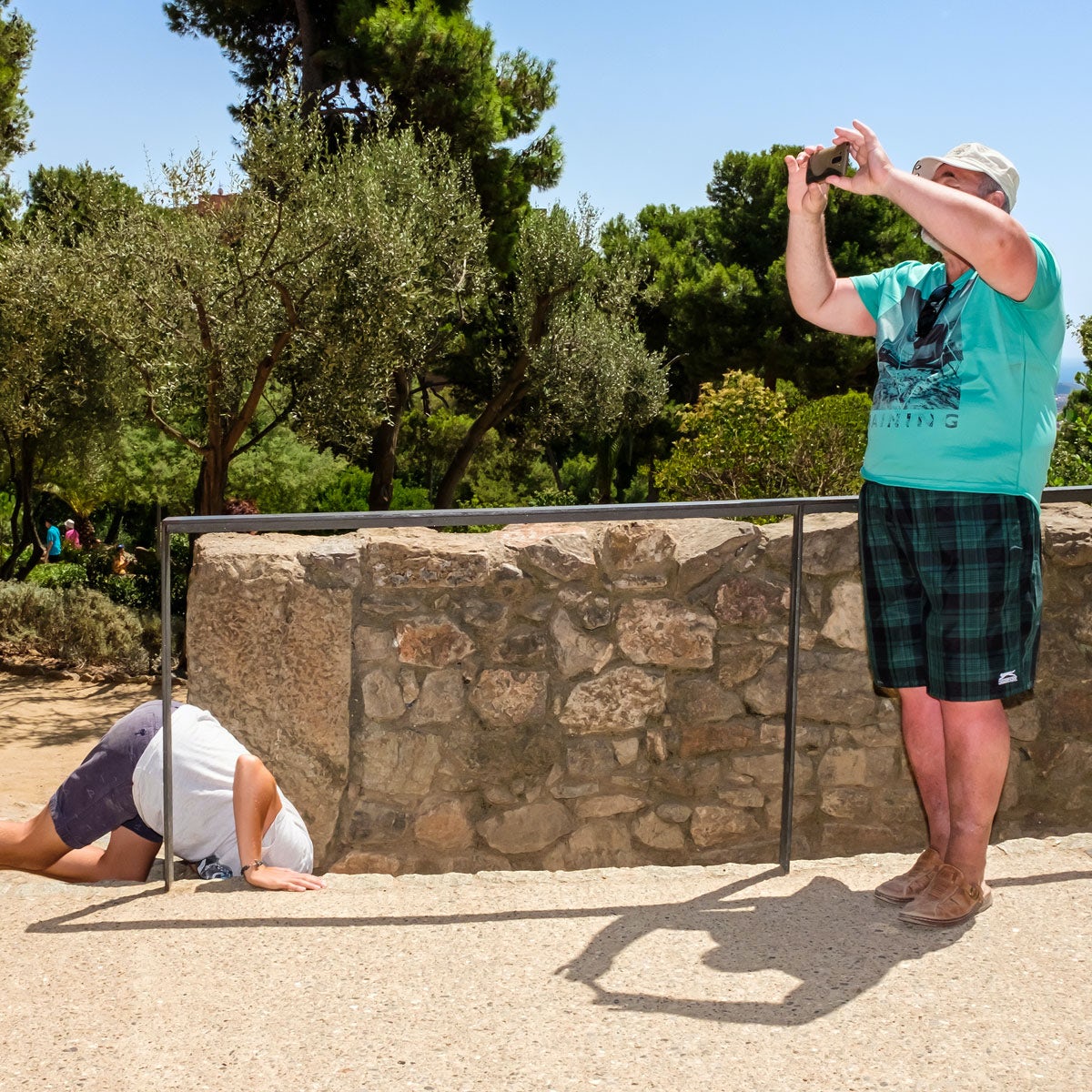 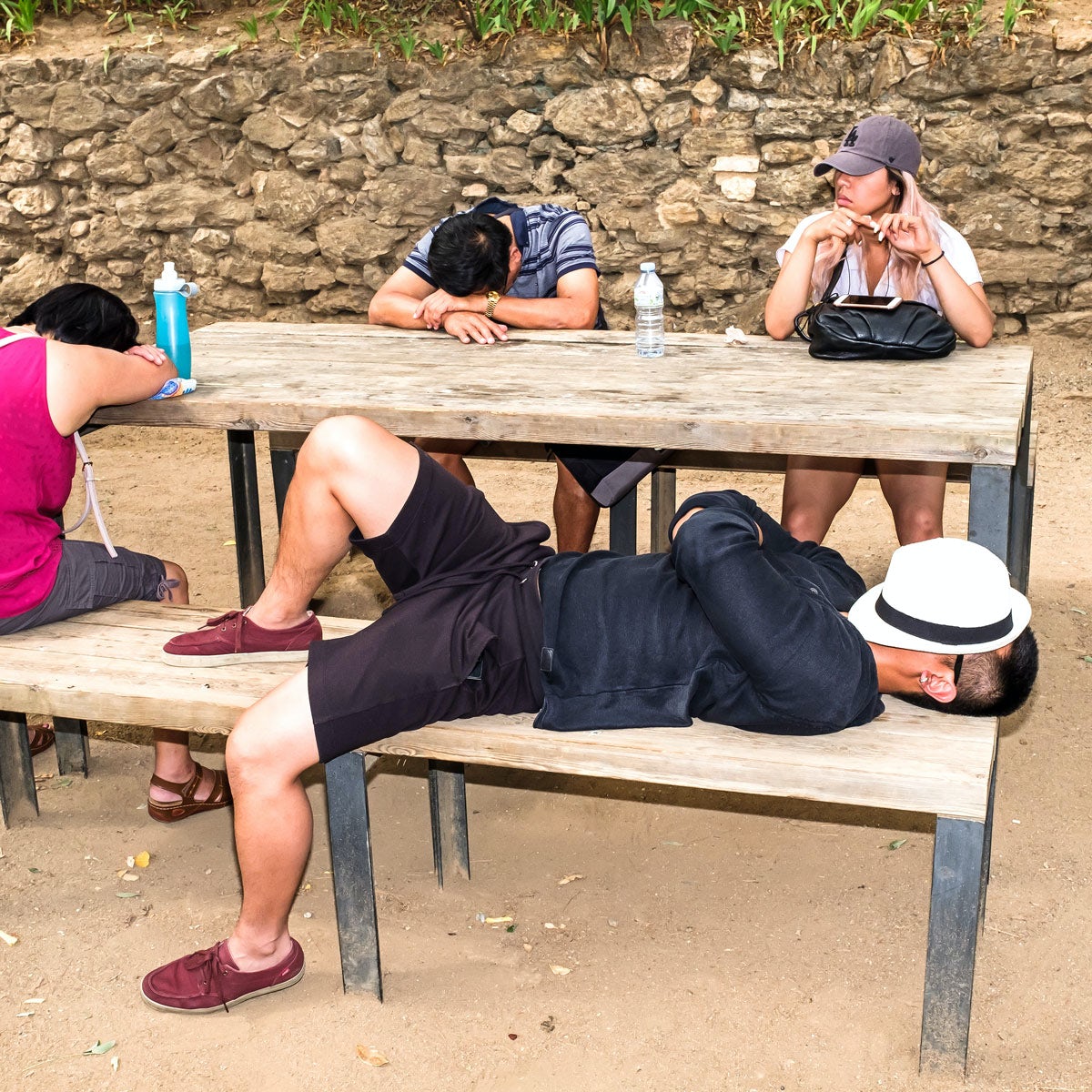 “In the cool dark rooms of the cathedral, I quickly realised the humorous photographic potential that tourist hot spots like these could offer. Juxtaposed against the beautiful architecture was an array of bemused, disillusioned tourists, bored, half-asleep, unintentionally waiting to be photographed. I took a series of successful photographs in quick succession, and while walking around looking for more I realised I had found what I was looking for,” says Stephens.

Taken over the course of three years and spanning the tourist havens of Spain and Portugal, the photographs are distinctive for their satirical take on the nature of tourism. One image shows a woman gazing gormlessly at a travel guide for Andalucía in Spain while unknowingly sat in front of the very tiles that feature on its cover, while another sees a man with flip-up sunglasses and a neon pink suitcase casually sleeping on a mattress in the street. 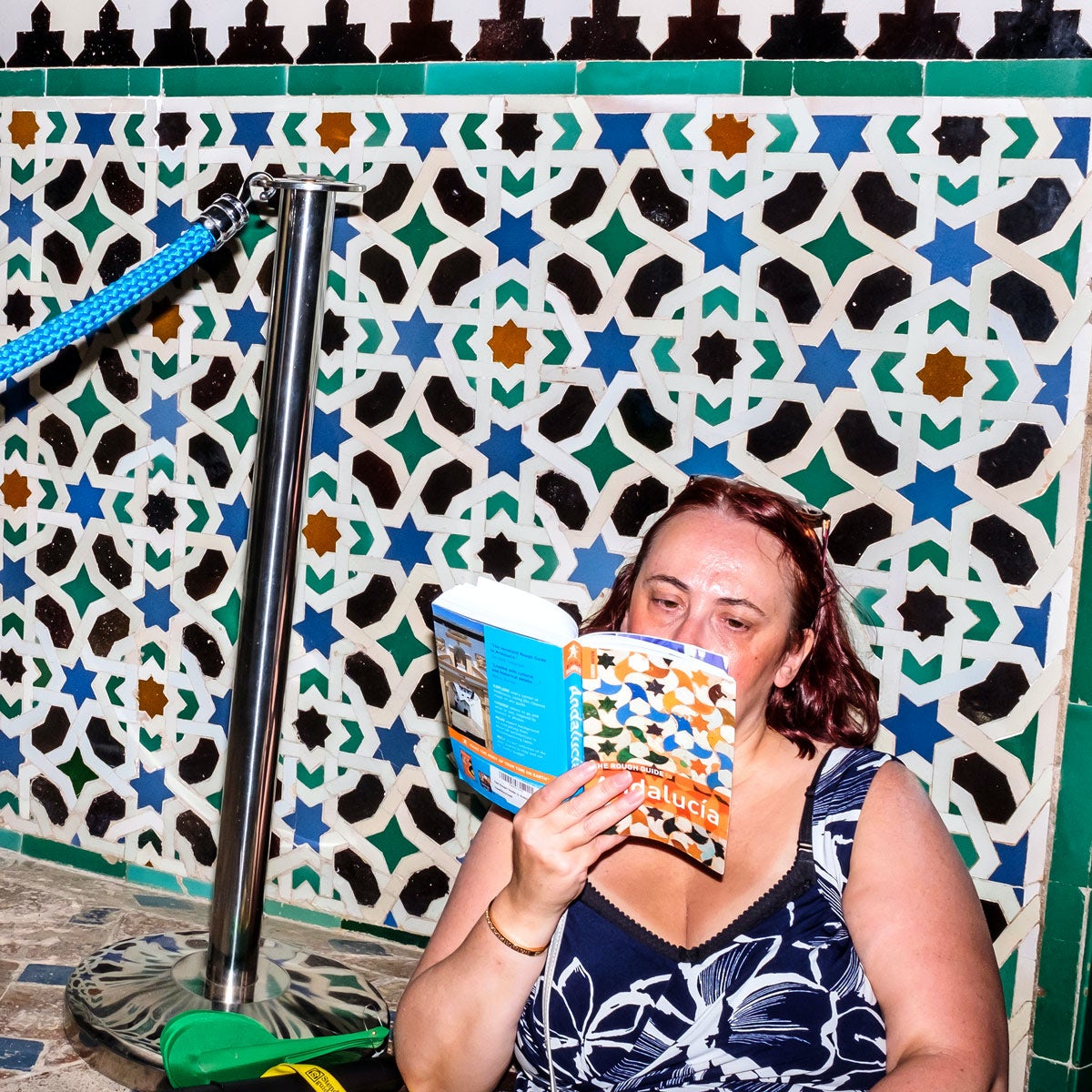 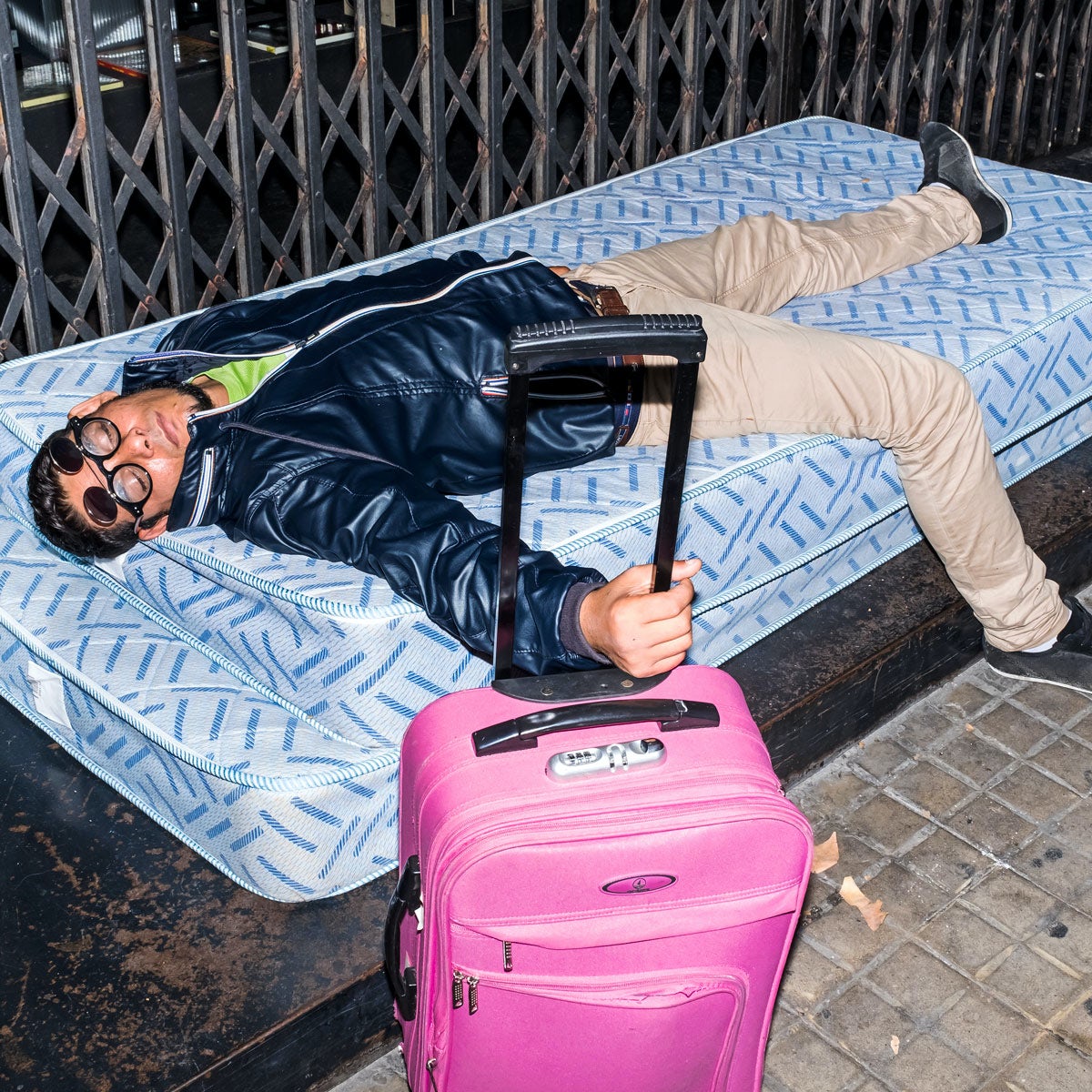 “[The photo] was taken as I walked home after a long and very unsuccessful day taking pictures,” says Stephens. “My camera was still over my shoulder, and I had a fading belief that I might still find something interesting to photograph. With just a few streets from my apartment left to walk down, I spotted the man from across the road and ran straight over to take the picture just in case he suddenly moved. Afterwards, I waited for around 15 minutes convinced he must be posing for someone, but in the end accepted that he was just fast asleep, so I left him to it.”

Stephens takes inspiration from anthropological photographers of the 80s, using flash and saturated colours to give his images an artificial and surreal quality while ensuring that all of them are completely un-staged. Shooting in square format allows him to emphasise the more alluring aspects of his subjects, as well as nodding to the certified shape of the Instagram generation. 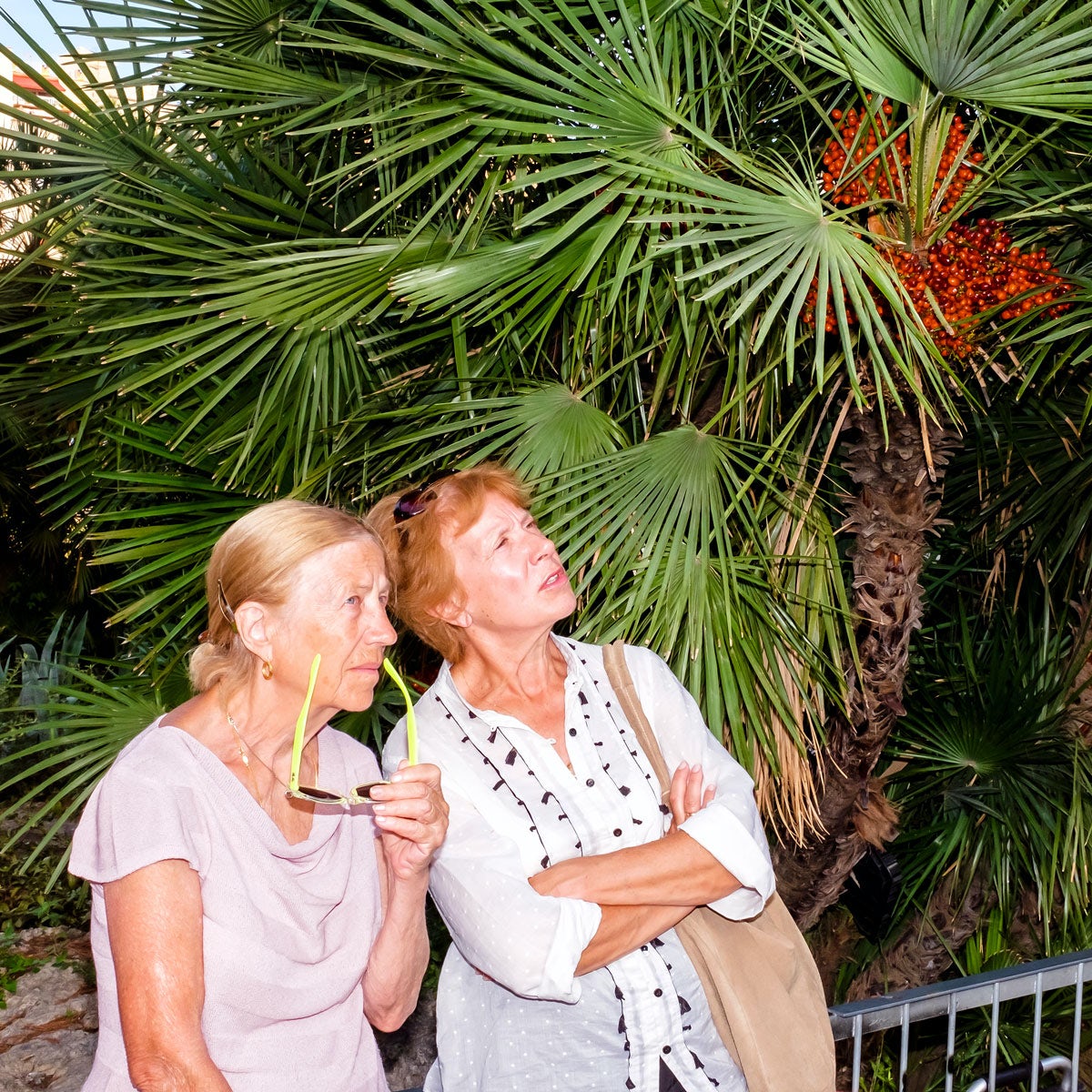 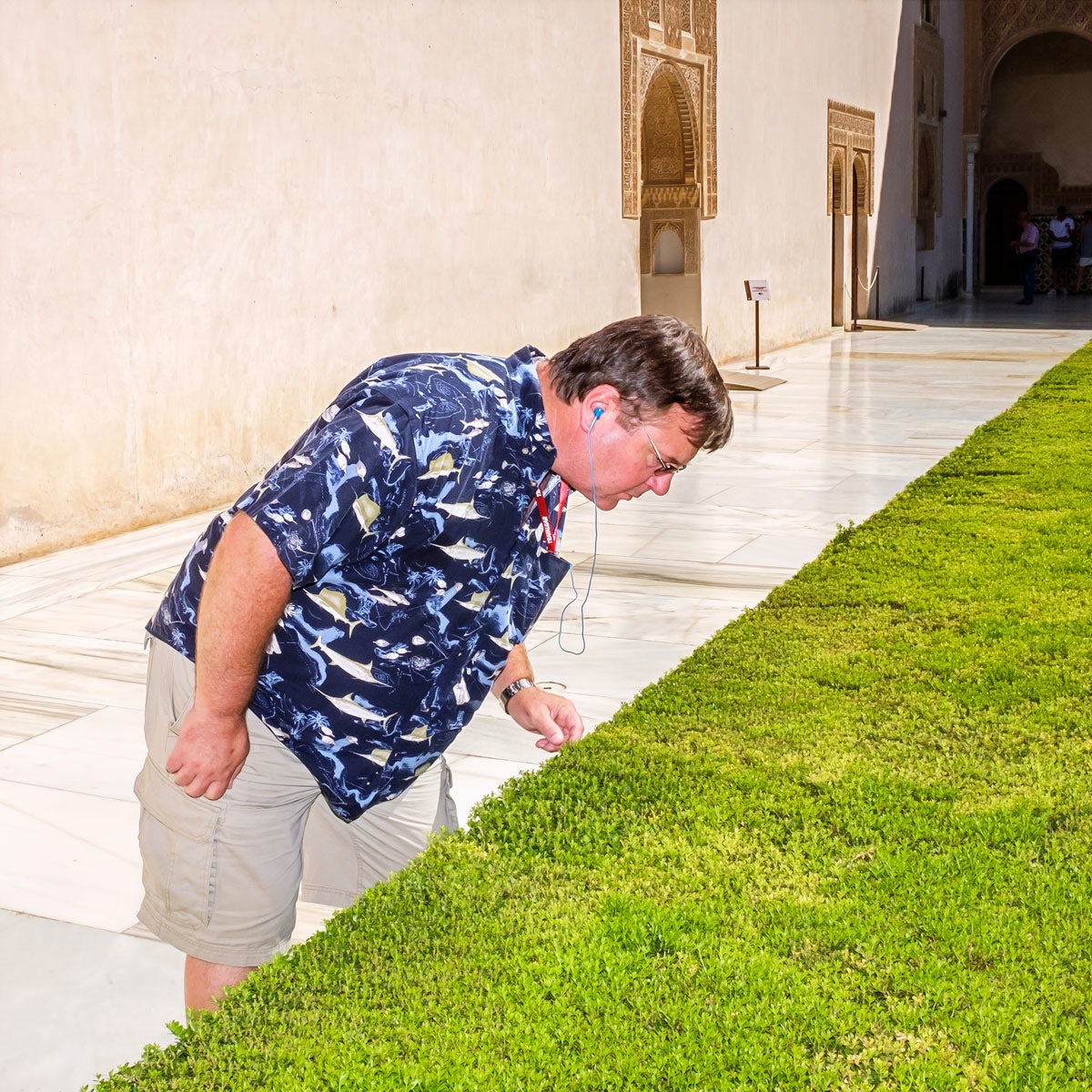 “For me the book expresses something that is universal to the human condition – that in life, expectation can often lead to disappointment. I feel this is especially evident in tourism,” says Stephens. “Wherever you go in the world, if a tourist experience is on offer, you’ll find people realising that it’s not what they’d hoped it would be. If the images bring some intrigue and amusement from observing how humans can behave, and influence people to question their own response to the world we live in, then my job is complete.”

Bored Tourists is published by Hoxton Mini Press on 2 August 2018, and costs £9.95. You can order copies here