Maybe not, but it’s currently storming the internet. In just five days, Childish Gambino’s latest video – This Is America – has racked up almost 50 million views. And that’s not counting all the memes and GIFs, the viral shots of the Georgia rapper throwing crazy shapes on a warehouse dancefloor, smoking a blunt on a car roof, and emptying an automatic rifle into a gospel choir.

But is this America? Where are the MAGA caps, pitchforks, and burning torches? The director of this new nightmare, Hiro Murai, keeps the white supremacists, and the bloodthirsty police force, at the periphery, out of focus and rushing past the camera eye. Most strikingly of all, Gambino himself becomes a stand-in for one of the angriest young men to emerge from the cauldron of 21st-century racism: raising his weapon, he turns into Dylann Roof, who murdered nine churchgoers at the Emanuel African Methodist Episcopal Church in 2015.

Why turn the lens away from the perpetrators of violence? Again and again, from the Rodney King beating to the Eric Garner murder, cameras have been central in exposing (if not prosecuting) hate in America. Here, though, the fascists are off the hook, and we find a row of apathetic kids, lounging on a balcony and following the revolution on their phones, as the warped voice of Young Thug drifts into the mix, flaunting his web presence: “America, I just checked my following list, / And you mothafuckas owe me…” 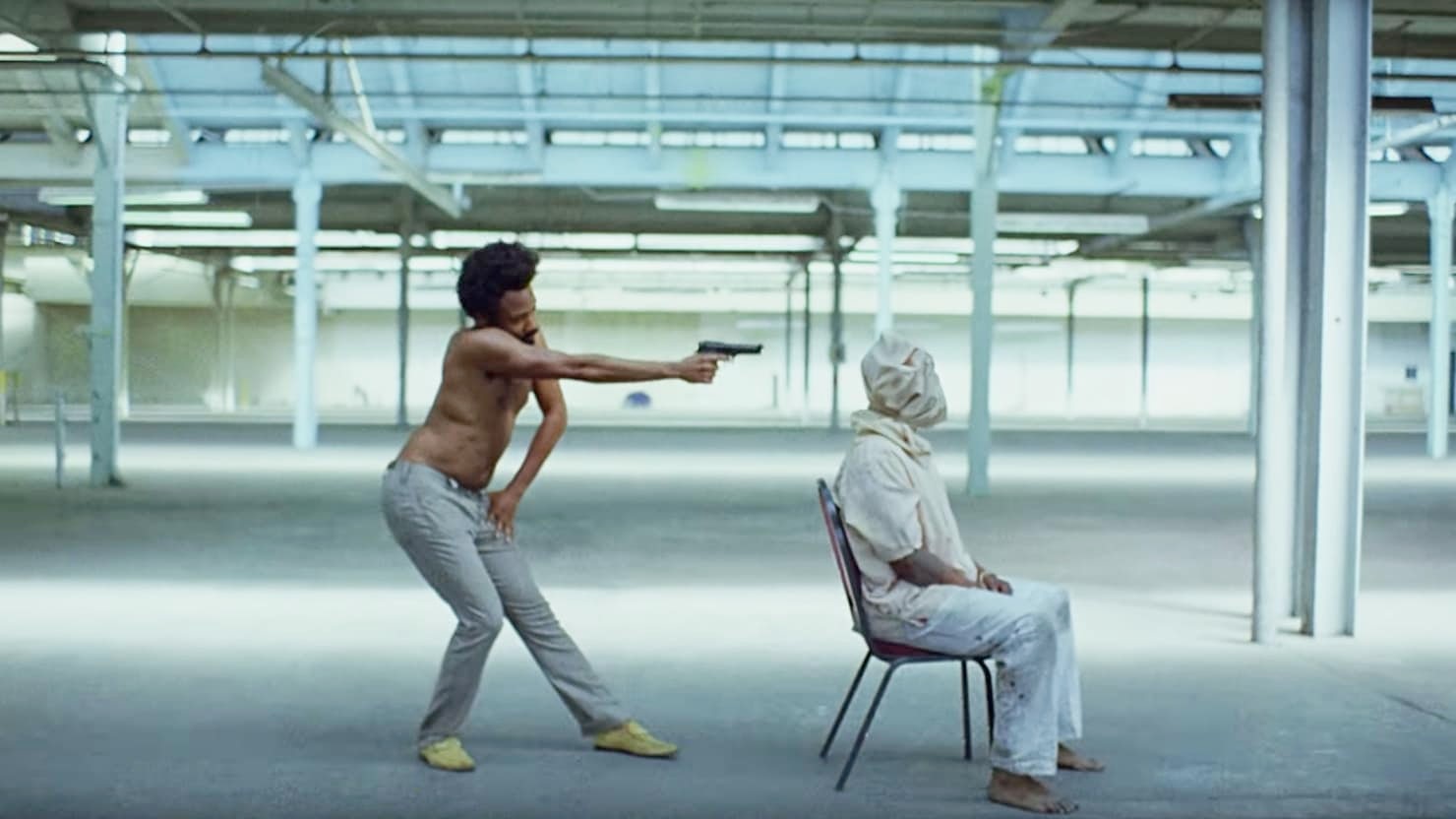 A few bars earlier, Gambino anticipates Thug’s studied narcissism. “This is a celly,” he raps, “that’s a tool, my Kodak.” Even if you miss the shout-out to yet another Southern MC (Kodak Black), this is a tight cluster of images. We are reminded that a camera-phone can be used for something other than Instagram: it can become a tool for exposing murder. But there’s another thread lurking here. The camera can also be (wilfully) mistaken for a tool – a handgun – as it was earlier this year, when Sacramento police fatally shot Stephon Clark, a young black man who was ‘armed’ with what turned out to be an iPhone.

These flickering parallel lives, as the device used to unveil police violence turns into the excuse for a curbside execution, capture the sick juxtapositions of being black in Trump’s America. Throughout the video, Sherrie Silver’s choreography thumbs through the book of African and African American dance history, placing Blocboy’s trap moves alongside the distinctive popping of South African gwara gwara. Gambino’s shirtless body becomes a dense intertextual sign, throwing allusions in all directions as he glides through a blank warehouse space. It’s a sexy and infectious sight, and you can see the GIFs sprouting every second. 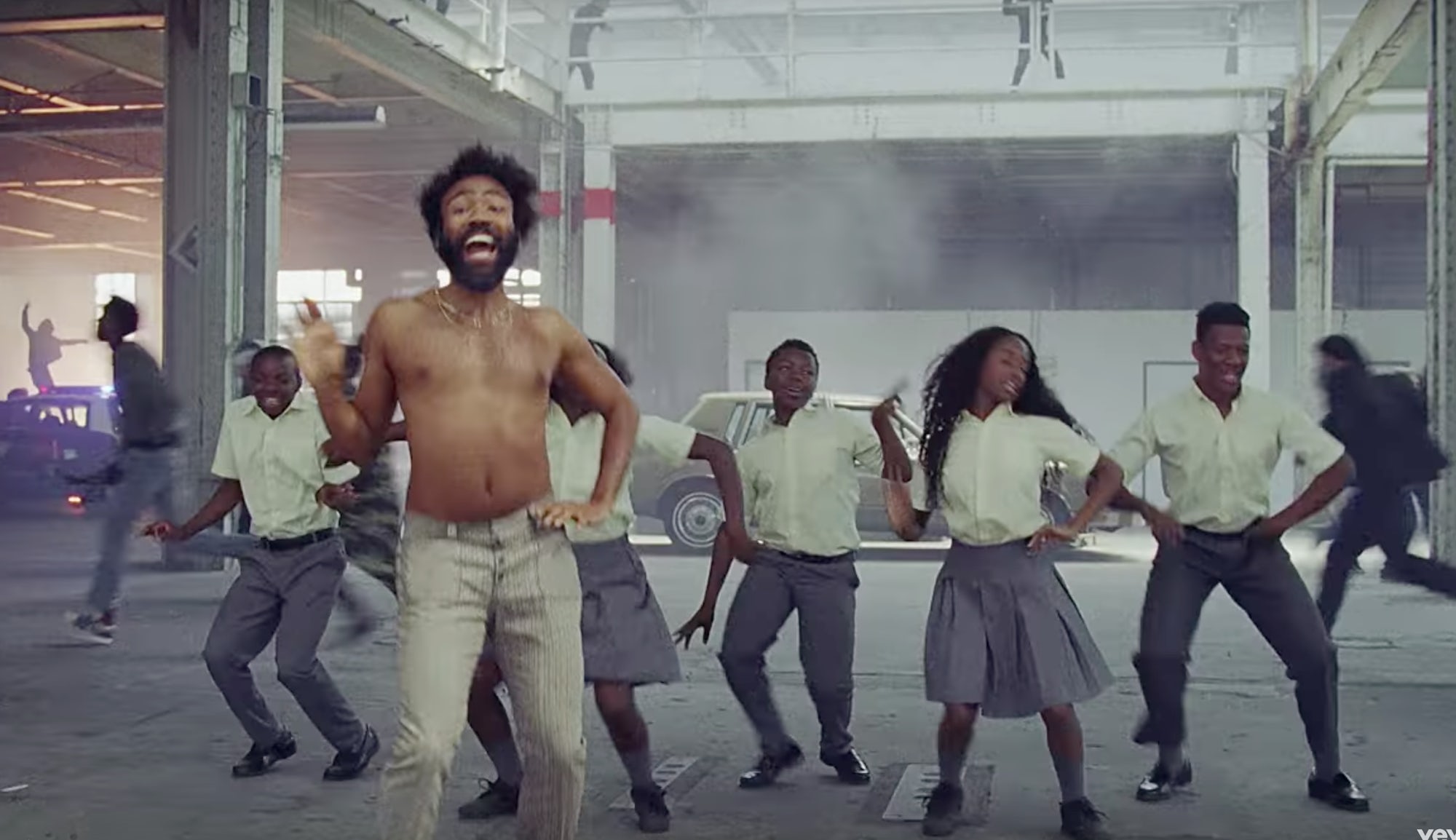 Elsewhere, though, Silver leads Gambino into more frightening territory, lifting the jolting wobble and the boggling eyes of the minstrel cakewalk. Already, the film has been dissected by an army of YouTube analysts, with freezeframes of Gambino set alongside grotesque cartoons from the Jim Crow South, blurring the rapper with a caricature from the Wilson era. The black performer is destablised, yet again, by all these commentaries, as he is read (and re-read) in relation to both authentic self-expression and white pastiche.

Oddly enough, this is an increasingly common gesture in contemporary hip hop, with the phantoms of minstrelsy and racial passing looming in a number of videos in the last 12 months, from Jay-Z’s appropriation of Sambo cartoons in The Story of OJ (dir. Mark Romanek), to Tyler the Creator’s grisly surgical adoption of white-face in Who Dat Boy (dir. Wolf Haley). Jordan Peele’s Get Out was the multiplex apotheosis of this trend, offering the most horrific commentary on American racism since the closing shot of Night of the Living Dead. 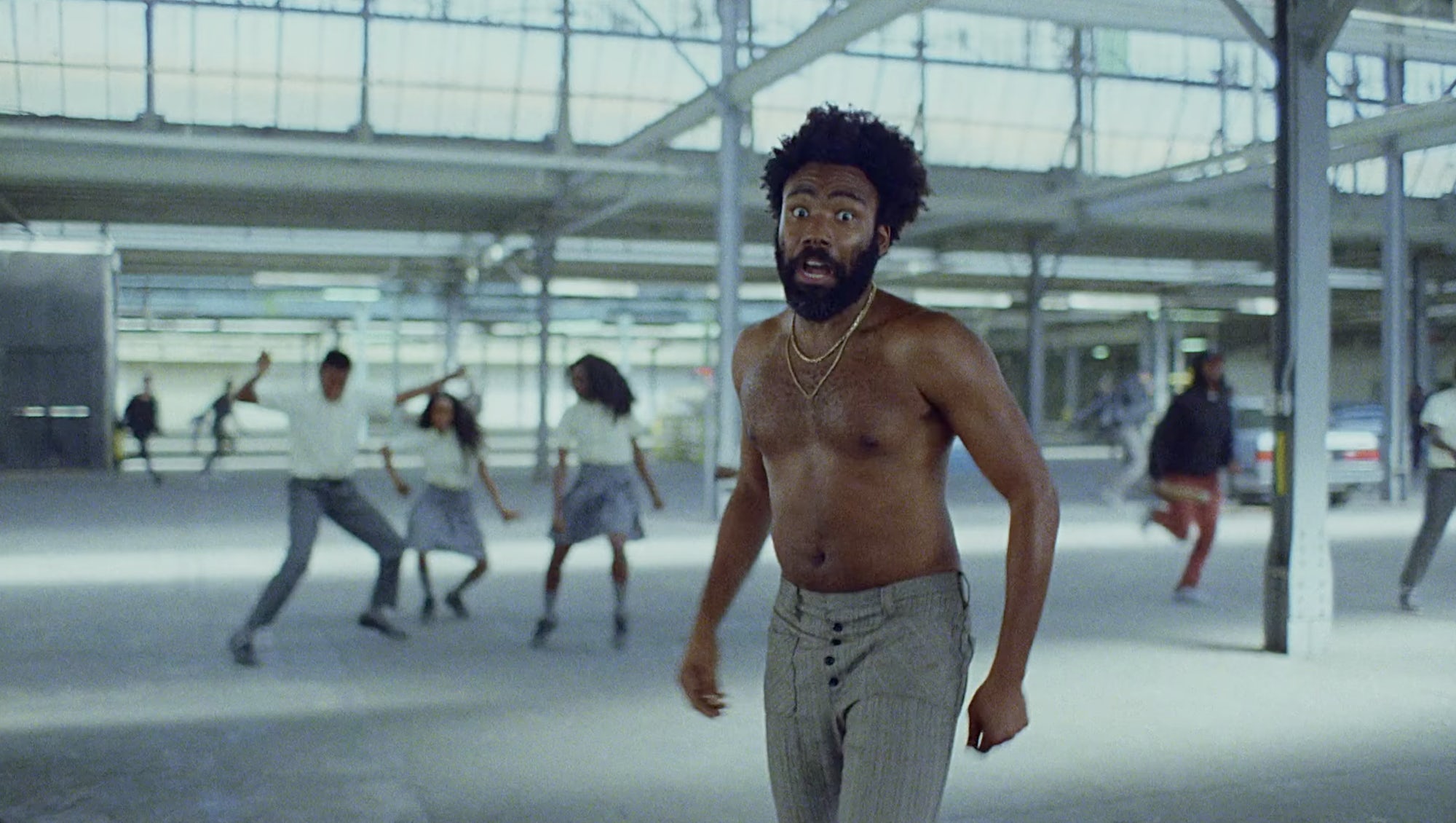 As a short film, This Is America is sharp as hell, and it holds its own alongside a spate of violent fantasies imagining life after Obama. As an MC, though, Gambino still seems a little unsure of himself. A taste for irony has shaped his work ever since the early mixtapes, back in the late 2000s. Even the alias turned out to be a joke: it was what popped out when he typed his real name into an online Wu-Tang Name Generator. This new cut feels closer to a warped commentary on Atlanta trap than a sincere engagement with it, reducing guests like Quavo and 21 Savage to parodic ad-libs (“skrrt skrrt!”).

For some, this is the sound of trap music growing up, as Gambino shows the stars how to get woke. For others, it’s an inauthentic carbon copy of the real sounds of Atlanta, borrowing the triplet flows and distinctive beats of the sub-genre and gobbling up their bandwidth with an indelible video. Perhaps it’s both: an unresolved tension between sincerity and salesmanship hovers over the track. As Young Thug puts it, in the mysterious refrain that closes the film: “You just a black man in this world / You just a barcode…” 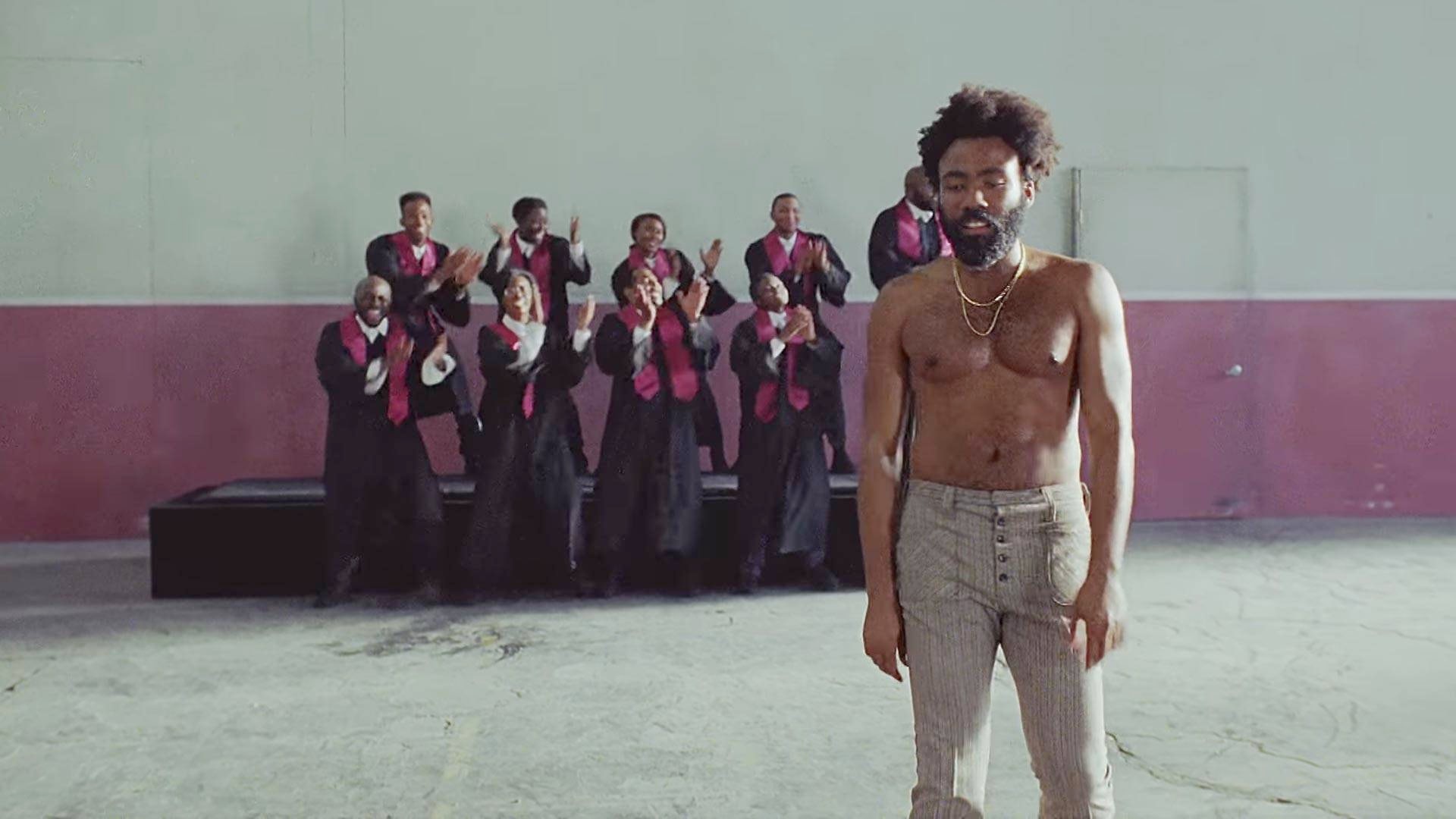 In those last few frames, as Thug fades out, Gambino charges towards the camera pursued by a horde of figures, his eyes wide. Like his camera-phone line, this haunting shot is doing many things at once. A nod to the mysterious ‘dark place’ of Get Out, a wink to the rabid fans tailing The Beatles in A Hard Day’s Night? Quite possibly. But it’s also a damning reinscription of the letter that the narrator delivers from place to place in Ralph Ellison’s Invisible Man (1952): “To Whom It May Concern,” read that vicious note, passed between a series of white onlookers half a century ago, “Keep This N*****-Boy Running.”

Rob Turner is a Lecturer in 20th and 21st-Century Literature at the University of Exeter. His book, Counterfeit Culture, which explores issues of truth and authenticity in American writing, is scheduled for publication with Cambridge University Press in early 2019

For more insight on the latest creative trends, subscribe to Creative Review