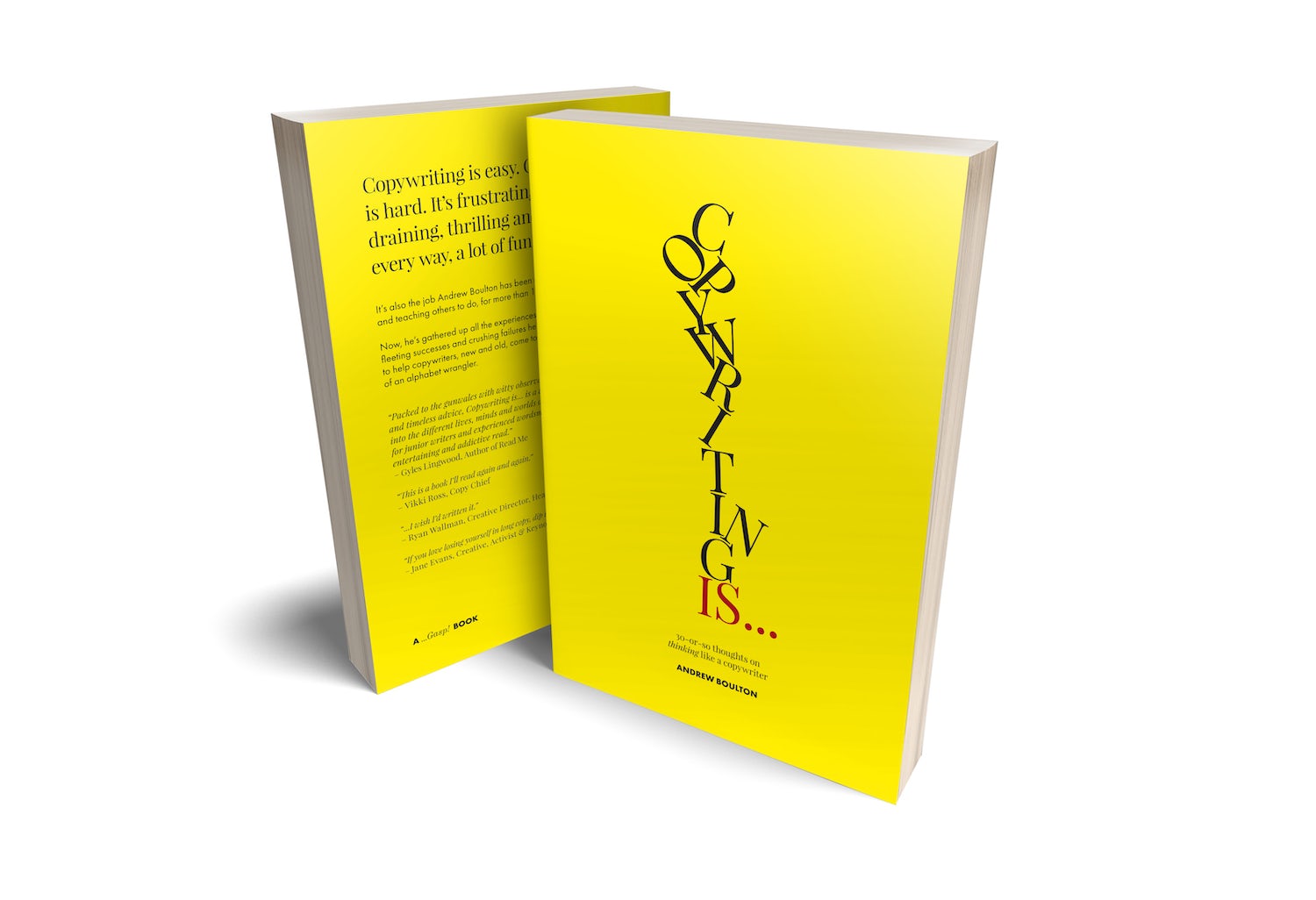 Copywriting can at times feel like a poor cousin to images in our visually dominated world. Yet with access to all manners of ideas, opinions and carefully crafted bon mots just on our mobiles, we are arguably reading more than ever before. And, as anyone who spends any time on Twitter knows, words matter – get the nuance of your argument or your brand message wrong and all hell can break loose over just a few lines.

There is little doubt that great copy requires great skill, and as such, most creatives are on the look out for ways to do it better. Step up a new book, titled Copywriting Is…, by Andrew Boulton, copywriting and creative advertising senior lecturer at the University of Lincoln, to help you through the mire.

As Boulton explains from the start, the book is not a how-to manual. “It won’t, for example, walk you through some individual copywriting techniques and methods,” he writes. “Nor will it show you specific examples of real-life ads and concepts to illustrate how these techniques are used. The reason is quite simple. Writing such a book is far harder to do and I am far lazier than the sort of person who is able to write one. More importantly, such books already exist and there are a handful of them I am entirely sure I would not be able to improve on.”

Instead, Boulton is offering over 30 pieces of advice that take you through the “feelings, fears, failures, frustrations and half-baked solutions from a life in copywriting, and the teaching of copywriting”. Here he’s shared four extracts with CR, covering the topics of Wandering, Collaboration, Envy, and Exploding, to give you a sense of what the wider book contains. 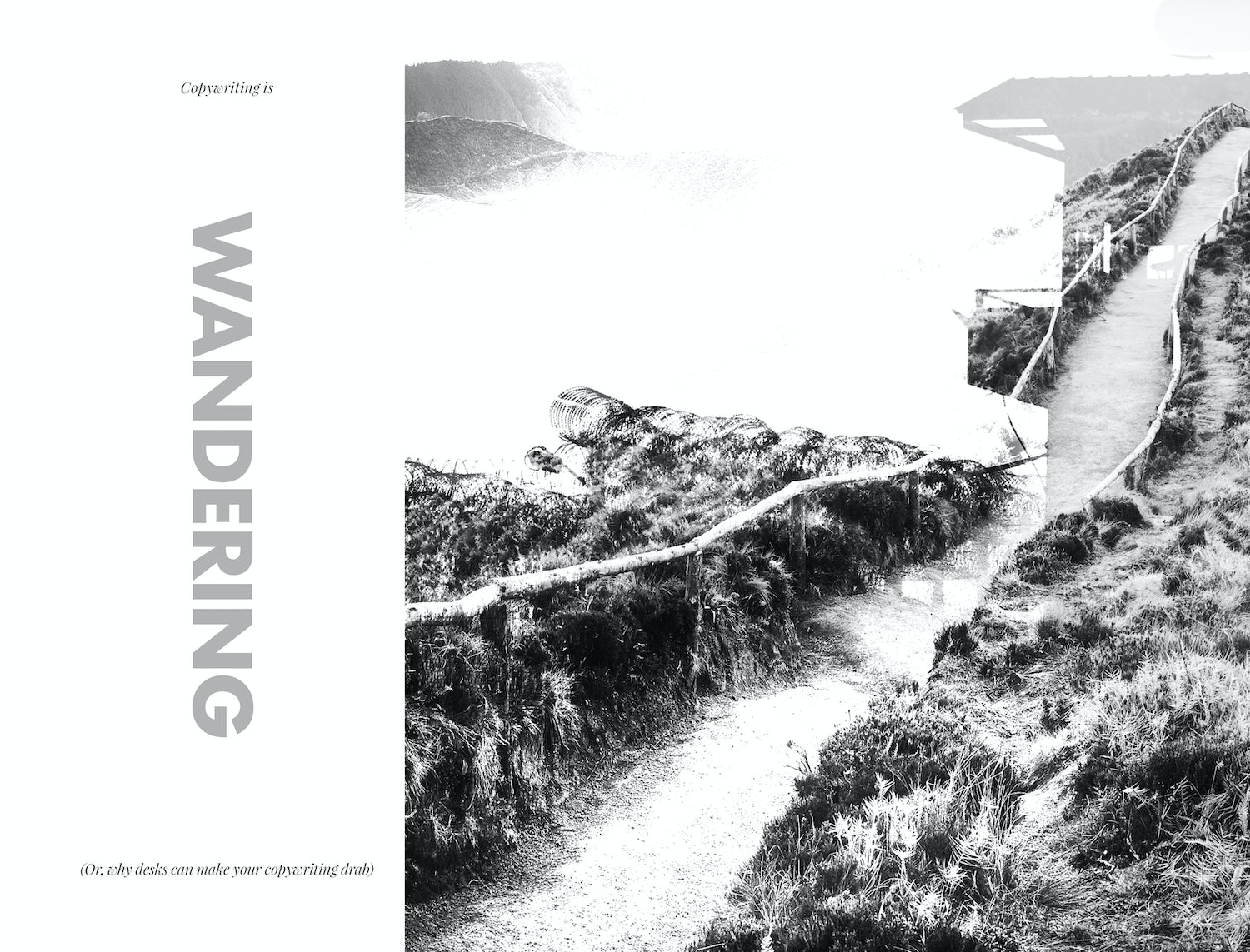 Some jobs are fixed to a certain environment. Pilots can only actually pilot if they are in a cockpit. Otherwise they’re little more than an overdressed airport accoutrement, no more distinct in that setting than an uncomfortable plastic bench or the faint ‘poof’ of a suspicious duffle bag being blown-up by security.

Copywriting, on the other hand, is not tethered to a particular point. Except, of course, when it is. Which, of course, is a lot.

Survey the copywriters in your immediate circle and I’d be surprised if all of them did not spend most of their creative time in the same spot, working with the same apparatus, trying to scrape inspiration from the same surroundings.

Also, how we choose the places we work is often more about conformity than suitability. We work at our desk because it is there and it is ours, not because it is necessarily the most effective environment for creative thought.

If Lethal Weapon had been a film about a lone detective, nearing retirement, quietly grumbling alone in his squad car that he’s “too old for this shit” – despite finding himself in very little actual shit – it would have been a far shorter, far less interesting movie. You might even find yourself complaining there was nothing lethal, or indeed weaponised, about what you’d just seen.

Buddy cop action movies are, if only in this way, similar to copywriting.

Now, I know that many copywriters would sooner socialise with a pouch of Scrabble tiles than spend too much time in the company of, urgh, people. But however appealing the solitary nature of the business may be, a copywriter without a pal can be like a submarine in a swimming pool. There’s only so far you can go.

There’s often one small addition that makes your writing better: creative chemistry. If we do some pretend maths, I’d say that the ratio of compatibility in creative partners is about one in a thousand. That’s not to say the majority of potential creative mates are inferior, just that your relationship with them collides with too many of the obstacles that make human beings such complicated and self-defeating creatures.

Topping the list of these obstacles is unquestionably politeness, that malignant scourge of effective and courageous ideas. And if you find yourself elaborately navigating the sensitivities of your partner, or suspect they are doing the same, that hesitancy never fails to permeate the work. 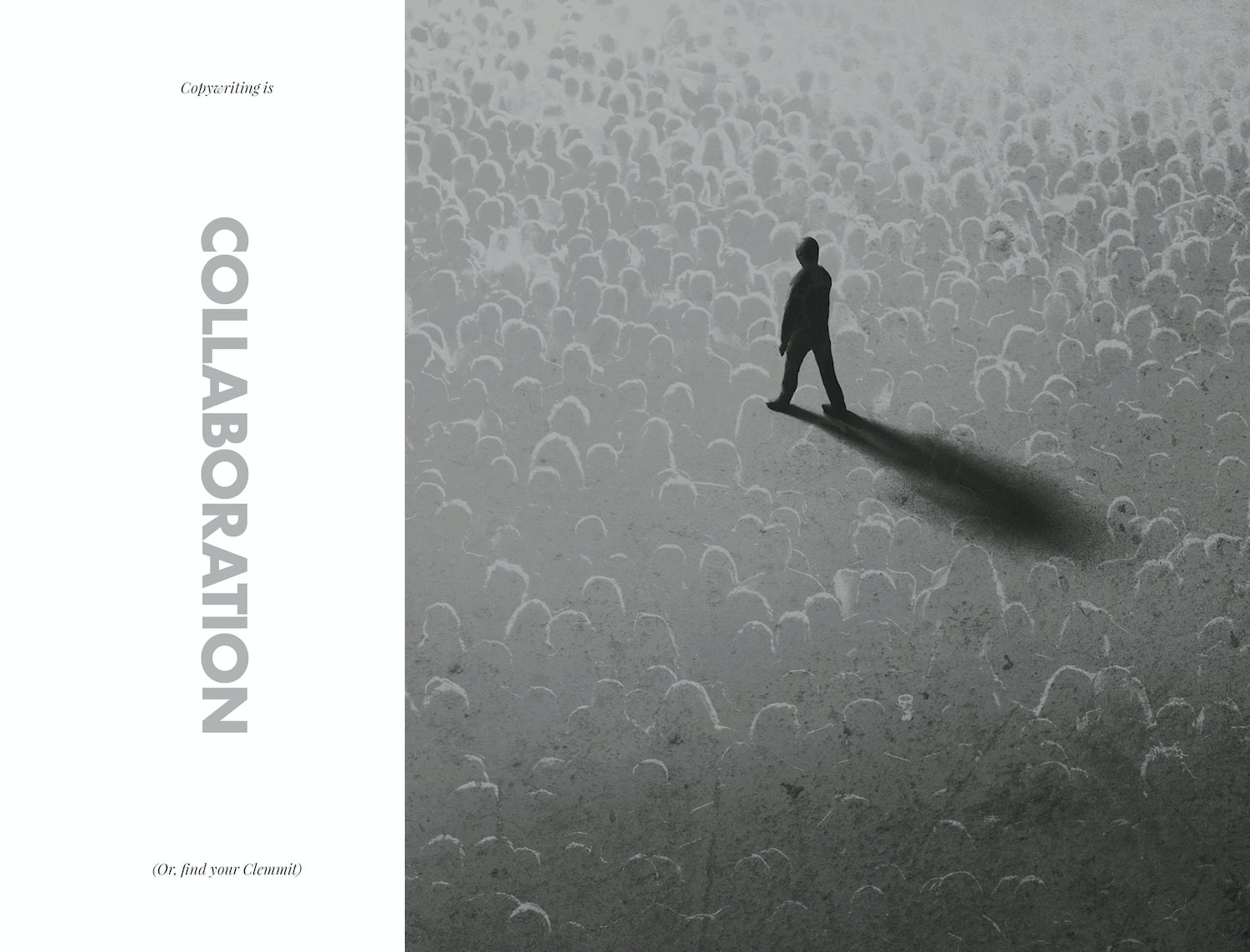 Copywriting, in its dark, inky heart, is a jealous business. Few of us have never experienced the piercing jab of professional envy at a fellow writer’s brilliance. Most of us, I suspect, are pierced so frequently that if you dropped us into water we’d percolate like a teabag.

And yet envy can be a powerful and positive emotion for any copywriter. We exist, after all, in a turbine of inspiration – and by necessity must first draw in the things that inspire us before we can expel the things that will inspire our reader.

And though inspiring writing is hardly in short supply, a copywriter who fails to properly filter their inspiration quickly blurs the distinction between poetic and persuasive. It makes perfect sense then that our creative inspiration should primarily be guzzled directly from copywriting’s own swollen udders. And it’s a churlish and self-defeating copywriter who sees taking inspiration from great copy as an affront to their originality.

On the contrary, disassembling the elements that make a great line of copy so effective is like a map to a more compelling solution. Following someone else’s impeccable reasoning is not cheating (and it won’t end with you ripping off the line that inspired you in the first place). Like a computer game cheat code from the 1980s, it will merely carry you over the hazards and plonk you down on a more rewarding path. 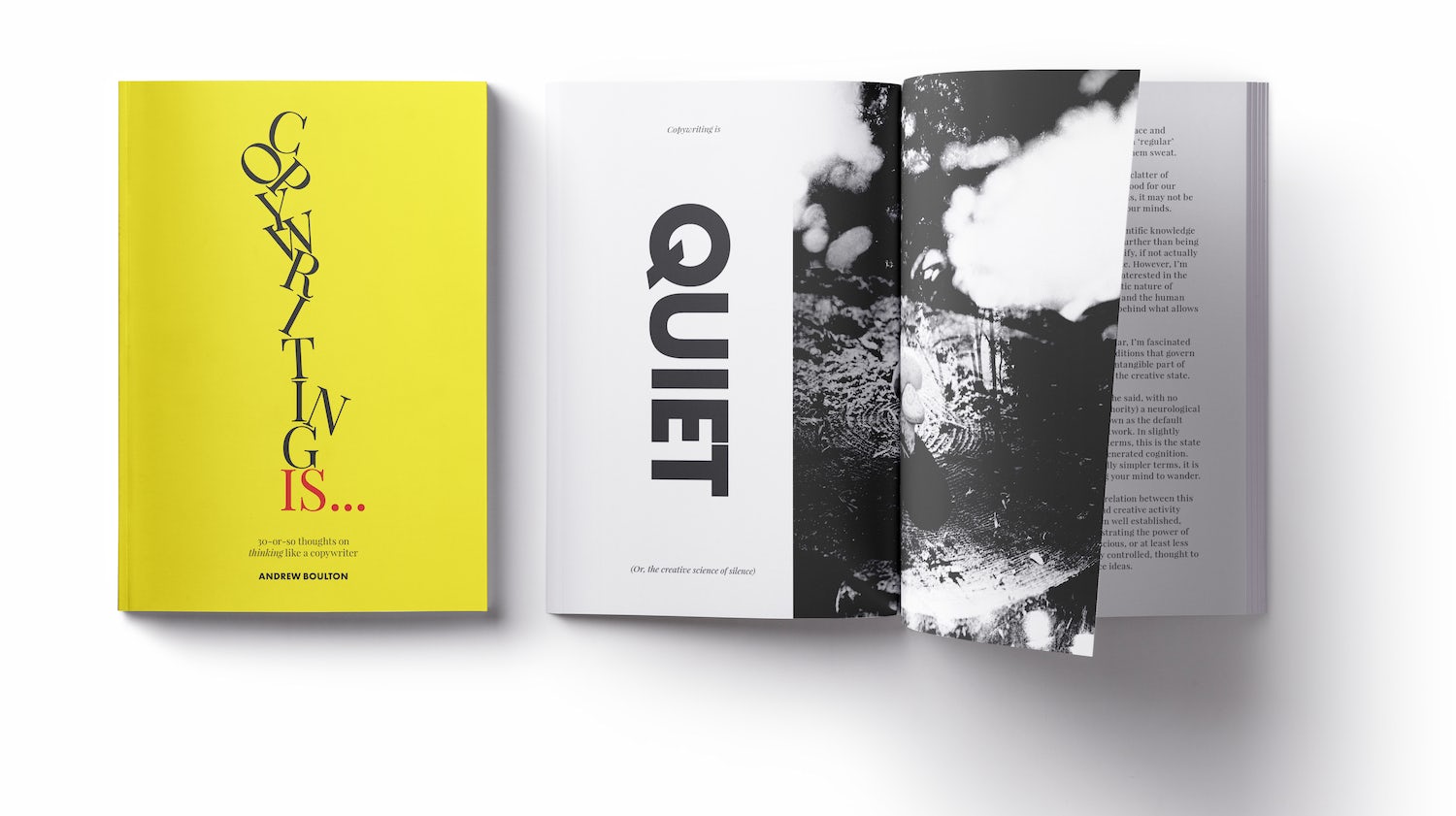 At some point in your copywriting career, no matter how much you resist, you will find yourself doing a little move I like to call the One Word Rub.

Not quite as grubby it sounds, it simply means you’ll write the first word of your copy, immediately rub it out, start again, rub out again and so forth until you’ve wasted an entire morning birthing and then slaughtering a single word that, for some reason, doesn’t meet your requirements.

It’s an agonising way to write, though entirely understandable. Something in our brains says if our beginning is weak, then that’s the altitude we have assigned to the entirety of the piece. But of course, this is not true. Some writers would even happily argue that the shittiness of their first draft is a necessity if they are to later produce anything of value.

By far the most useful piece of writing advice I have ever read comes not from a fellow copywriter but from the novelist Ray Bradbury. He says this: “Hot today, cool tomorrow. This afternoon, burn down the house. Tomorrow, pour cold critical water upon the simmering coals. Time enough to think and cut and re-write tomorrow. But today – explode – fly apart – disintegrate.”

That act of explosion contains enough force, fire and deafening noise to distract you from any doubts, or the urge to find fault with everything you put onto the page. And today’s you is in charge only of splattering the walls with imagination. Tomorrow you is the one who has to tidy it up.

Copywriting Is… by Andrew Boulton is published by Gasp! Books, priced £12.99; gasp.agency