Don McCullin was on honeymoon with his first wife, eating breakfast in Café de Flore, Paris. On the neighbouring table, a Parisian gentleman sat reading a paper. On the front page, an East German soldier was leaping over barbed wire in the centre of Berlin.

It was 1961, and McCullin had just turned 26. Speaking from his home in Somerset, he remembers: “I said to my wife: ‘When we get back to England, would you mind if I go to Berlin?’”

The photographs McCullin took that day are at the centre of a new retrospective at Tate Britain. They look like the work of an experienced practitioner, skilfully showing two giant military forces facing each other down whilst, in the midst of such tension, Berlin’s citizens attempt to carry on with the minutia of their lives.

They had £70 in the bank. A flight to Berlin cost £40. But McCullin was determined to use the money to fly to the German city and photograph the event we now know as the formation of the Berlin Wall.

“We were poor, so taking that money was one of my first selfish acts in my photographic and married life,” McCullin says. “But something in my mind said to me: ‘You have to be there, you have to do this.’”

But, remembering it today, McCullin says he didn’t have a clue what he was doing.

“I was an absolute novice,” he says. “I knew I was witnessing a great crisis in the world – possibly the beginning of the Third World War. But I was terribly ill-prepared to be in that position, even though I sent myself there. I only had one camera – the kind of camera a fashion photographer might use – and no exposure meter, so I was a rank amateur in every conceivable way. But there was an instinct that took me there in the first place, and it was a wise instinct.”

It was the start of the photojournalist’s career proper, for it earned McCullin a contract at The Observer newspaper, a professional relationship that endures to this day.

“The Observer had told me they weren’t interested. But they ended up running the story, and I got a contract for 15 guineas a week,” he says. “It was the onset of my beginning in the world of photography. Looking back on the photographs now, I think it’s one of the best things I ever did in photography.”

For the next five decades, McCullin would travel to whatever conflict was taking place the world over, his images spread across The Sunday Times, The Observer and numerous other broadsheet news organisations and magazines around the world.

But McCullin casts doubt over whether, if he were 26 today, he would be able to build such a successful career. Indeed, he casts doubt on the future of photojournalism at all. “Photojournalism is showing every sign of being as dead as a door nail,” he says. 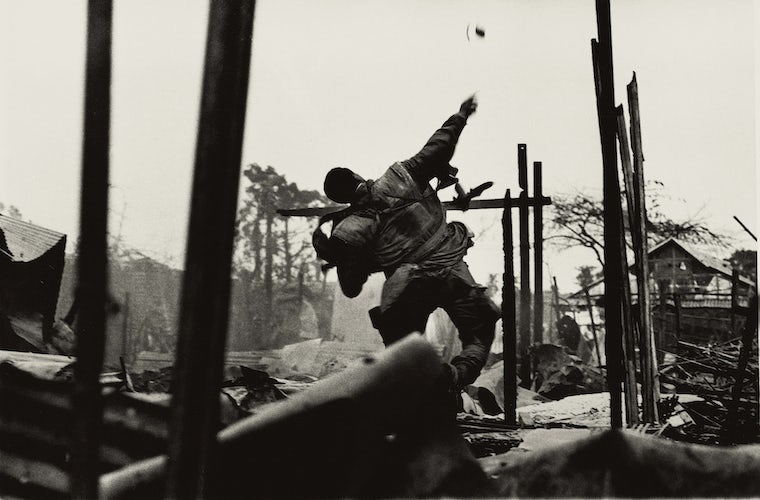 “Newspapers today are only interested in running pictures of showbusiness and narcissism. None of them are showing hard news. There aren’t any serious pictures – ones that give you information or tell you how awful other people’s lives are in the world. They all seem to have sanitised themselves with footballers, cooking, Hollywood stars and good-looking people. That is not news.”

Working as a conflict reporter, he says, is harder now than ever before. “War reporters today have to operate with no insurance, no coverage, no backing. I admire them for their spirit. But the ball game has totally changed. If you get great pictures – and risk your life to get them – where are they going to go? Are you going to get enough money to cover your original costs and expenses? It’s a really nasty place to be right now, and it’s a shame.”

McCullin has always remained independent, resisting the standard industry route of becoming affiliated with a specific photography agency. He was briefly involved with the world-famous Magnum Photo Agency, but decided against pursuing full membership. Today, he casts doubt over whether a young photographer should aspire to be part of such a group, saying “it’s better to be independent than be part of a gang”.

“Magnum over the years has become a bit of a mess,” he says. “The founders of Magnum – Henri Cartier-Bresson and Robert Capa – were the cream. They really had talent. But I don’t think Magnum over recent years has produced work that is really commendable. They have guys that can take pictures, but not many of them shine. They’ve been round far too long, and, in my opinion, their socks have fallen down a bit. And a lot of people in Magnum are jealous of sin of each other.”

War reporting has proved a punishing vocation. McCullin has been married on three separate occasions, and admits that, at the age of 84, he has only recently developed close relationships with his children. To do the job properly, one must be willing to sacrifice much in the way of family life. “I spent my whole time leaving my family to go abroad,” he says. “I put them in a position where I made them care and worry about me, asking if it was the last time they’d see me drive off in the car. It’s a bad profession, covering wars. It’s bad for you, and it’s bad for marriage. Many men and women in this profession have been married many times – the job wrecks marriages.”

Yet his life’s work, collated and organised so impressively at Tate Britain, is breathtaking to behold – a testimony to the art of perseverance and determination.

McCullin has processed by hand each of the 250 plus prints in the exhibition from the 60,000 negatives he keeps in his Somerset home, in a dark room he has created in a shed in his garden. “My home is slightly contaminated with the memory of war,” he says. “It’s poisoning the house in a strange kind of way.”

Many of the images have never been developed before, and are on show at the Tate for the first time. “I’ve been going over the negatives again with fresh eyes, and I’ve been finding gems that I have never spent any time with before,” he says. “But I look at them now and I think to myself: ‘Did I do that? Is this really my work?’ Where the bloody hell did I get all that energy?’”

Don McCullin is at Tate Britain until May 6; tate.org.uk; All images © Don McCullin, courtesy Tate