Hailed by his contemporaries as “the poster king”, 20th century graphic designer E McKnight Kauffer brought an avant-garde aesthetic to industries including literature, theatre, transport and more throughout his hugely successful career.

Cooper Hewitt, Smithsonian Design Museum holds one of the most extensive collections of Kauffer’s designs in the world. The New York museum’s new show, Underground Modernist, is the largest ever retrospective on the commercial art pioneer, featuring roughly 200 objects that examine his impact and legacy across media.

The show has been put together by Caitlin Condell, associate curator and head of drawings, prints & graphic design, and Emily M Orr, assistant curator of modern and contemporary American design at the museum.

Universal Design Studio worked on the 3D design for the show and LucienneRoberts+ developed the 2D design. Roberts is also taking part in a talk with the curators on September 28, which will explore how Kauffer’s output has influenced their own work.

Organised chronologically, the exhibition traces Kauffer’s career from his beginnings as a painter to his transformation into an internationally renowned commercial artist. His extensive output includes eye-catching posters for the London Underground, illustrations for celebrated works of literature and iconic graphics for major corporations such as Shell-Mex and American Airlines.

Kauffer also widened the scope and impact of his practice through collaborations with his peers in art, literature, performance and film. The show includes commissions as varied as film titles for Alfred Hitchcock’s The Lodger, illustrations for T S Eliot’s Ariel poems, costumes for theatrical and ballet productions, and covers for novels by H G Wells, Aldous Huxley and Ralph Ellison.

Though Kauffer considered himself a progressive and an egalitarian, his commissioned work tells a more complicated story about his ideals and privilege. Above all though, the show highlights his long-held view that modern art should move beyond the walls of museums and galleries to infiltrate daily life.

“The artist in advertising is a new kind of being,” Kauffer wrote in 1938. “His responsibilities are to my mind very considerable. It is his business constantly to correct values, to establish new ones, to stimulate advertising and help to make it something worthy of the civilisation that needs it.” 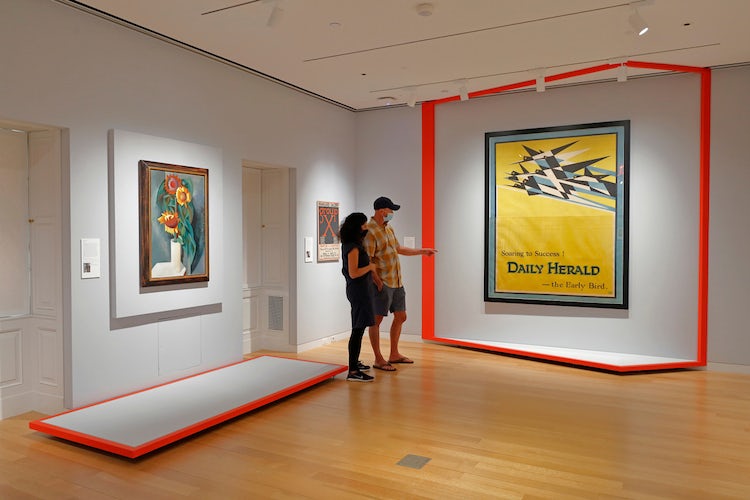