One of the world’s most famous band T-shirts isn’t actually a band T-shirt at all. That ubiquitous Helvetica-based Beatles design is, according to its creators, just “a shirt with four random names on it”.

Dutch design studio Experimental Jetset says this with a knowing wink: after all, if you slap ‘John & Paul & Ringo & George’ (in that order), you know exactly which John, Paul, Ringo and George people are likely to be reminded of. Of course, it is sort of about The Beatles, but it’s also “a bit of an iconoclastic gesture as something that goes against images, against representations”, says the studio. 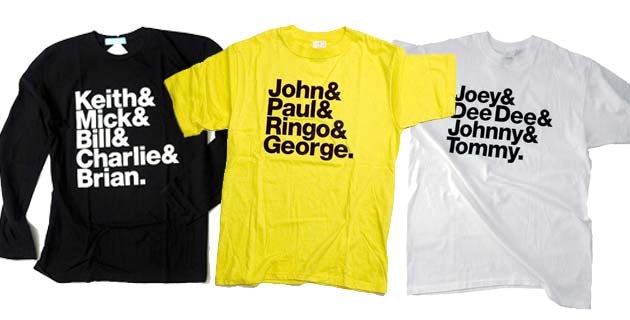 It turns out Experimental Jetset’s design has a little to do with fandom, but quite a lot to do with dense theoretical discourse. At the time it was created in 2001, “we were really obsessed with the Situationist case against ‘the spectacle’ (and also the whole notion of the Bilderverbot [translated as the theological ban of images], as explained by the Frankfurt School),” says Experimental Jetset. “So we were really trying to turn the popular image of a pop band into something less pictorial, less representational — not a band photo, but just a dry list of names.