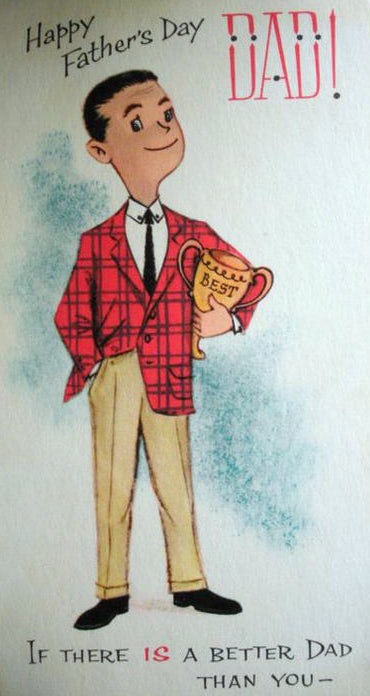 With Father’s Day coming up, and an eye for a topical PR opportunity, Clinton’s Cards has compiled some research on how the depictions of dads on their cards have changed over the past 50 years.

Not surprisingly, this mostly reflects a shift from formal to informal, with the once-aloof figure of authority now much more likely to be shown as a somewhat put-upon figure of fun. “Depictions of dads as aloof, pipe-smoking, newspaper-reading, besuited men ‘enthroned’ by the fireplace have disappeared from all cards, with the exception of parody cards, and have been replaced by casually-dressed, soft-in-the-middle, sofa-dwelling figures, often likened to Darth Vader and far more likely to be comically inept,” Clinton’s say.”In 50 years, dads have put on around 15 kilos, and are far less likely to be depicted behind the wheel of speed boats or sports cars or scoring the winning goal. They are, though, more likely to have a strong emotional connection with their children.”

Clinton’s say they have identified five phases of Father’s Day cards from the last 50 years:

A formal phase (mid to late-1960s): the slightly austere dad, sitting in an armchair in a three-piece suit and tie, smoking a pipe and reading the paper whilst family attend to his every need.

The ‘undo-the-tie’ phase (late 1960s to early 1970s): characterised by cards that invite dads to abandon the razor and the tie for a day of ‘indulgence’.

The anything goes phase (late 1980s to today): today’s dads – the subject of jokes, more likely to be comically inept. Frequently the source of loans, a 1% chance of being Darth Vader, depicted, variously, as dogs, pineapples, gorillas, leopards, teddy bears, tortoises, lions, bears, elephants, crocodiles, donkeys, parrots and frogs; a 2% chance of being seen as a superhero; a 1% chance of displaying ‘builders’ cleavage’.

So there you have it. Personally, after a brisk round of show-jumping and a go on the speed boat, I will be looking forward to spending Father’s Day behind the paper, with my trusty pipe on the go.