When First Direct arrived on the market in 1989, it was a breath of fresh air. It had a simple and compelling proposition – ‘banking without branches’ – and a bold and playful approach to marketing. Its launch was announced with print ads which hinted at the multitude of things that consumers could be doing instead of visiting a branch and a one-off TV ad presented as a message from the future, which appeared to hijack consumers’ screens in the middle of an Audi commercial.

As the brand has grown, it has continued to focus on convenience and customer service – and positioned itself as a cooler, cheekier and more convenient alternative to high street banks. It’s an approach that proved successful: First Direct now has over 1.4 million customers and has topped numerous customer satisfaction polls. 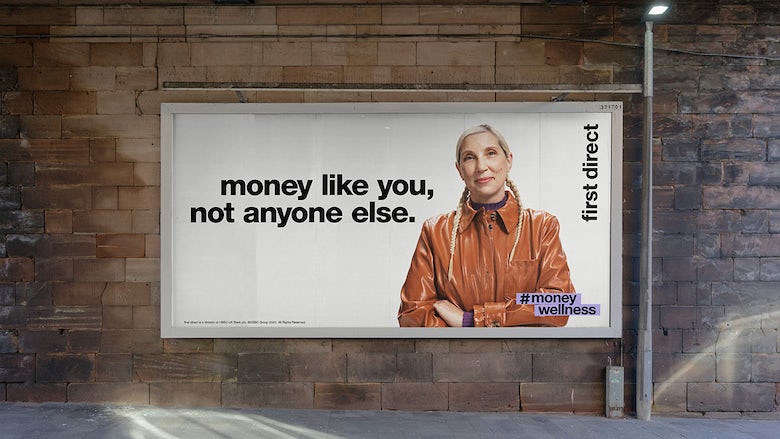 But the growth of digital banking has presented a tough challenge for First Direct. Its once-radical proposition is no longer a USP and newer rivals Starling and Monzo have promised an even more convenient service. In March last year, First Direct fell to second place in Money Saving Expert’s customer satisfaction poll, with Monzo taking the top spot, a worrying fact for a bank that has long prided itself on being a consumer favourite.

So what do you do when you’re a disruptor brand that’s no longer all that disruptive? For First Direct, the answer, it seems, is to change focus. This week, the brand announced the launch of a campaign from ad agency Brooklyn Brothers which sees it reposition around a new subject: financial wellness.

Through print ads, billboards and social media content, First Direct is hoping to highlight the link between money and wellbeing, and spark a national conversation around ‘money wellness’. Social media videos promise a ‘money wellness revolution’ while print ads pitch First Direct as a brand that “looks after” its customers. A section on the brand’s website also sets out a commitment to putting customers’ wellbeing at the heart of the business. 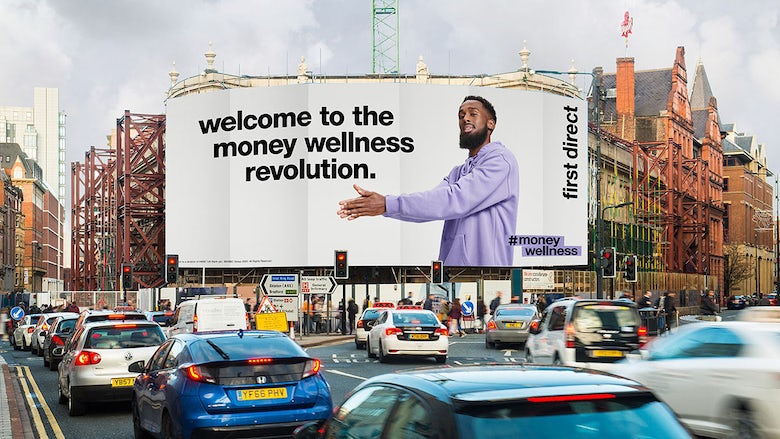 First Direct says the campaign was inspired by the fact that money remains one of the biggest sources of anxiety in Britain. It recently conducted research which found that people considered money more important to their wellbeing than either diet or exercise – yet the ‘m’ word is often absent from discussions around living your best life.

By focusing on financial wellbeing, First Direct is also hoping to differentiate itself from brands prioritising flexibility and control. It’s a tactic that CMO Helen Priestley claims demonstrates a “human-first” approach to banking: “Today, what we’re hearing is that people want to improve their overall wellbeing and that they recognise how they feel about their money is a critical part of that. It’s our genuine ambition to be the bank that gives people a better relationship with their finances and helps them feel well as a result,” she says. 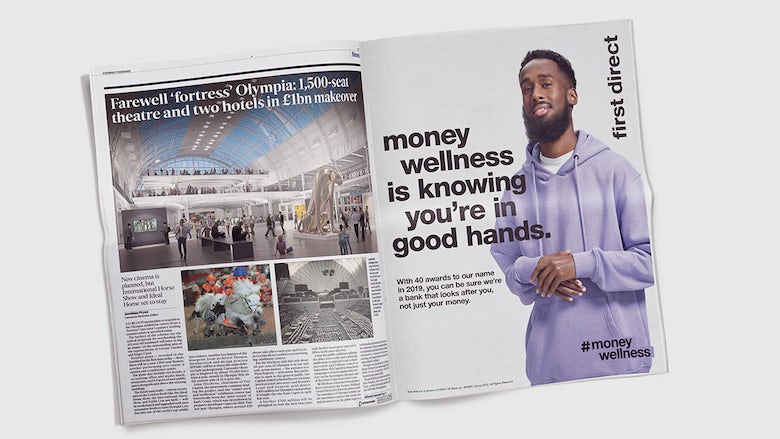 It’s an interesting shift in positioning. With Monzo and Starling now rivalling the bank on convenience and customer satisfaction, it makes sense for First Direct to turn its attention to a new topic. And while wellness has become a hackneyed phrase, financial wellbeing is a concept that will no doubt resonate with a millennial audience struggling with the burden of student loans, stagnating wages and rising living costs while consistently being reminded that they should be saving more or spending less on avo toast.

It’s true that money has been unfairly ignored in conversations around wellness, and if First Direct can genuinely help people improve their relationship with money, then it could carve out a niche in a space that its competitors have yet to own.

But what the new campaign fails to make clear is how it’s going to achieve a money revolution. The campaign emphasises First Direct’s commitment to customer service – but there’s no mention of specific steps it is taking to change people’s attitudes towards money. Perhaps this will follow, but if it doesn’t, it could end up looking as if the brand has simply jumped on the wellness bandwagon.

Is money a wellness issue? We think so. #moneywellness pic.twitter.com/5Z7KWwgZdI

The campaign itself also feels pretty uninspiring compared with First Direct’s early ads. It does a perfectly decent job of getting the ‘money wellness’ message across – but there’s nothing particularly daring or innovative about the creative released so far, and that’s a problem at a time when First Direct is facing tough competition from both challenger brands and high street banks looking to modernise their service.

Monzo and Starling have also launched a number of features which are designed to help alleviate people’s anxiety around banking, introducing real-time data, reports and targets to help people keep track of their spending. For the First Direct campaign to feel truly authentic, it needs to be delivering something similar to its customers.

If First Direct can start some genuinely thought-provoking campaigns around money – and ensure that its banking service is genuinely built around financial wellness – then its repositioning could prove a wise move. But if it’s hoping to reprise its challenger status, it will need to do more than launch a hashtag and remind us of a fact that most people already know – that worrying about money isn’t good for our mood.