Todd Antony documents The Salone Flying Star Amputees, a football team born out of the civil war in Sierra Leone

By Rebecca Fulleylove
The Photography Annual

Flying Stars is a personal project by New Zealand photographer Todd Antony. The Salone Flying Star Amputees is a football team born out of the adversity of the civil war in Sierra Leone that took place from 1991–2002. The war not only killed more than 50,000 people, it also led to thousands of innocent civilians having their limbs either forcibly removed by rebel soldiers or destroyed in landmines. Some of the victims have come together to create a community based on their love of the game.

Antony discovered the Flying Stars team while researching new potential projects, with the photo­grapher often taking on an annual passion project to shine a light on underrecognised groups and subcultures around the world. Travelling for miles on ­crutches to practise and play games against other disabled teams, the players Antony met find joy, companionship and a sense of belonging in a country still reeling from such a recent and devastating conflict. 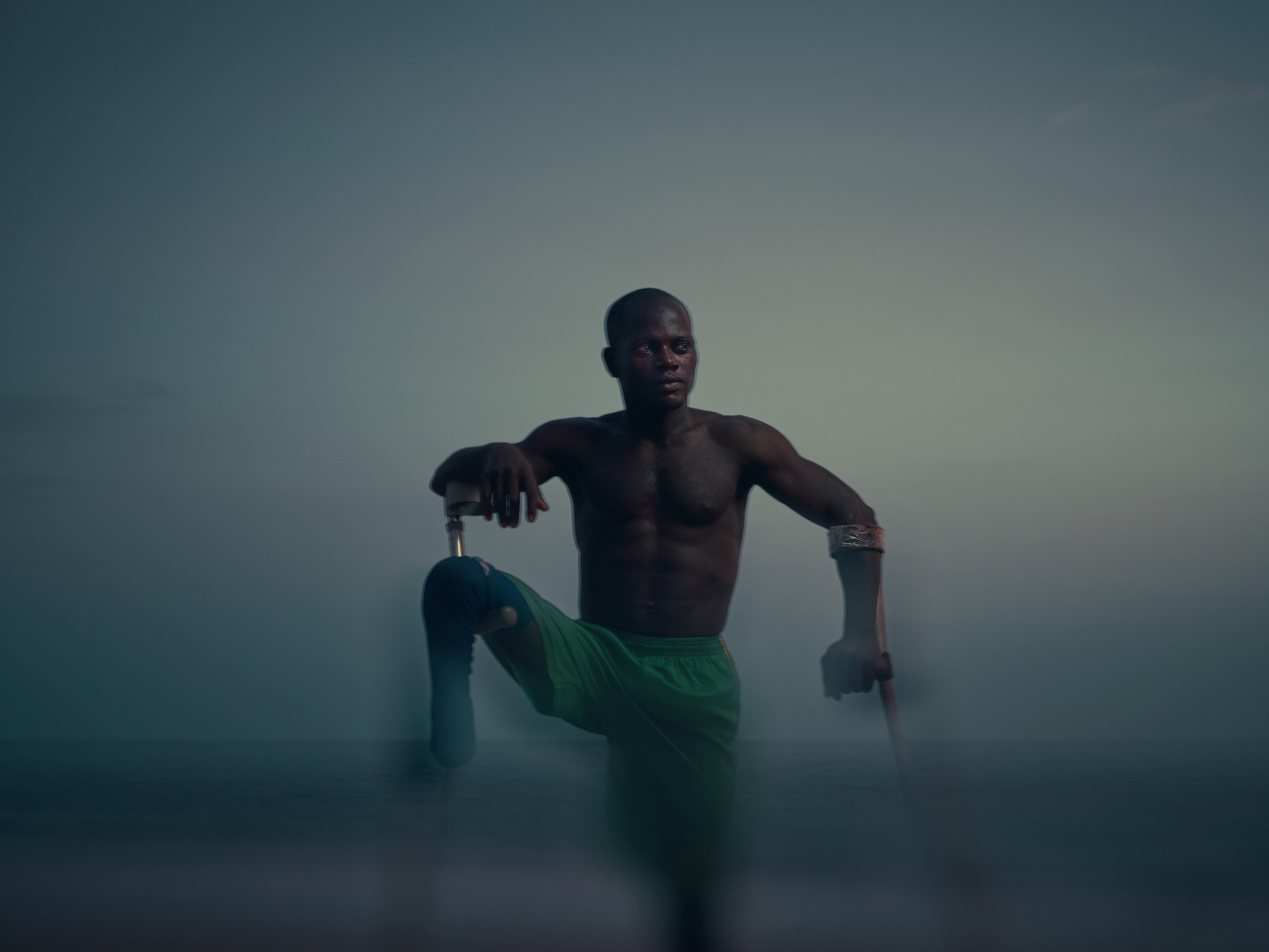 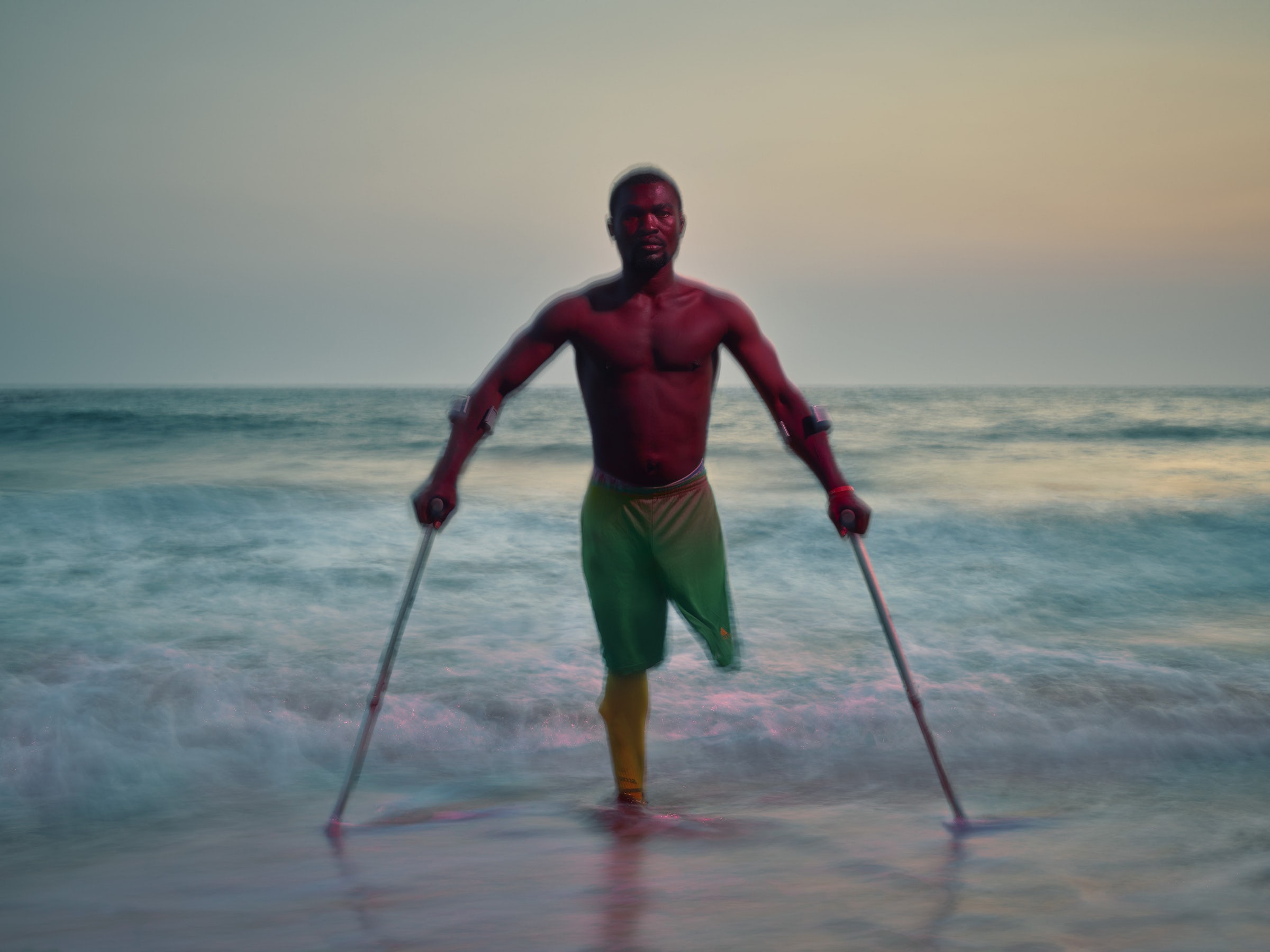 The photographer shot the images in the towns of Freetown and Bo and captured the players in dynamic, arresting poses, which Antony ­enhances using his camera. What adds to the power of the shots are dramatic backdrops of Sierra Leone, which include the hard earth and stone chip pitches they play on, plus some sandy beach-based pitches and the ever-present red earth and green jungle.

“I wanted a number of the portraits in the project to get across some small sense of the trauma the players have experienced in their lives, by using a number of in-camera techniques to achieve this,” explains Antony. “Using lens diopters and slow shutter speeds I created ghosting and jarring effects within the image that allude to the trauma and ghosts of their past experiences.” 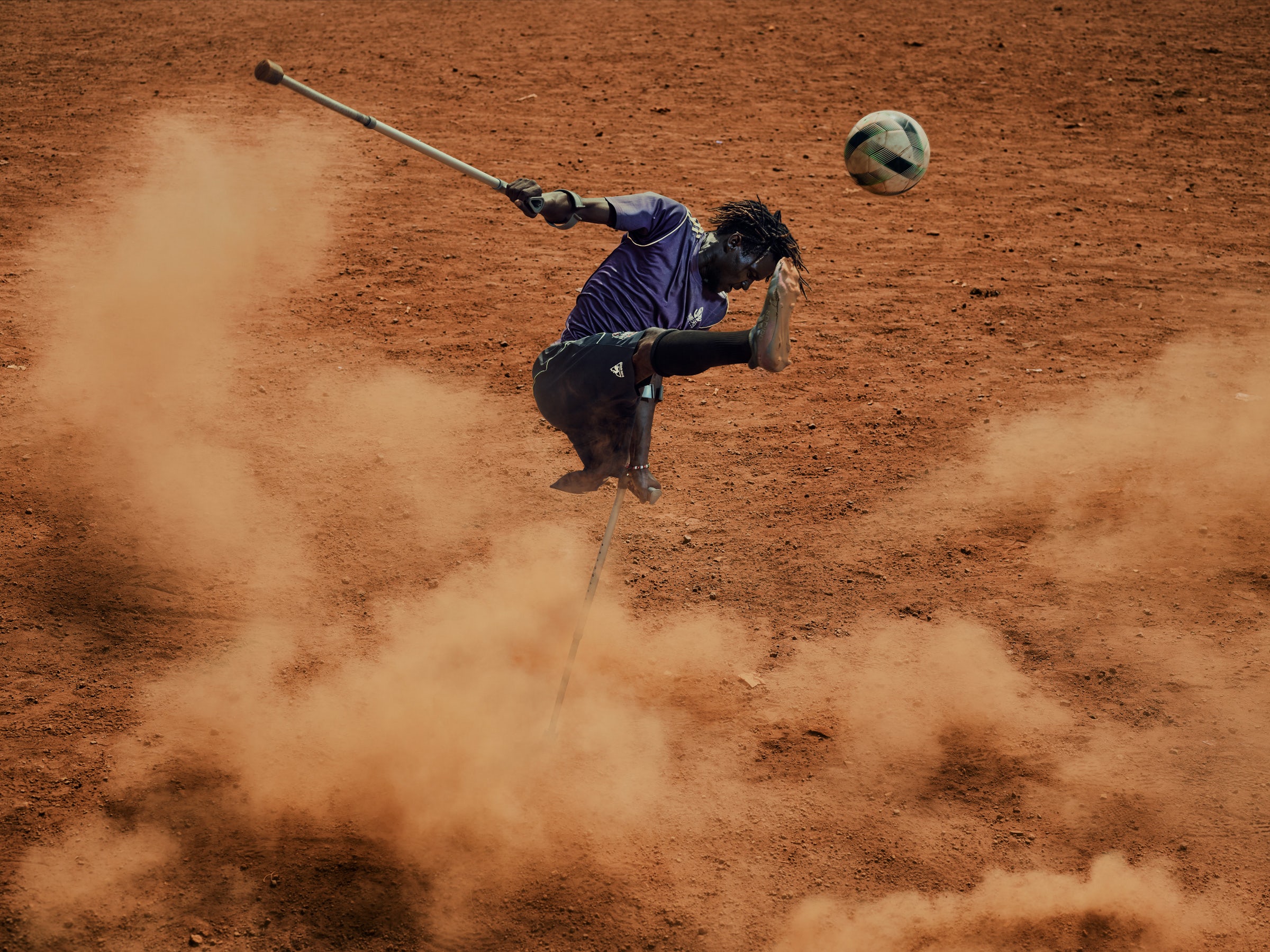 Though Antony’s images demonstrate the strength, community and hope the players have built, his photographs also bring attention to the hardships they face. Receiving no support from the government, often the team lacks funding for essentials such as crutches and travel costs, which is why Antony also set up a GoFundMe page to help with these expenses.

“Over the last few years, my personal projects have taken me around the world to shoot ordinary people that lead extraordinary lives in their own way. The Salone Flying Stars are the epitome of that, having experienced adversity from a young age and developing a resilience that few ­others can claim to have,” says Antony. “I wanted to capture that in the images and showcase what incredible athletes they are. Increased awareness of the Flying Stars can hopefully lead to funding and the ability to stage their own amputee premier league.” 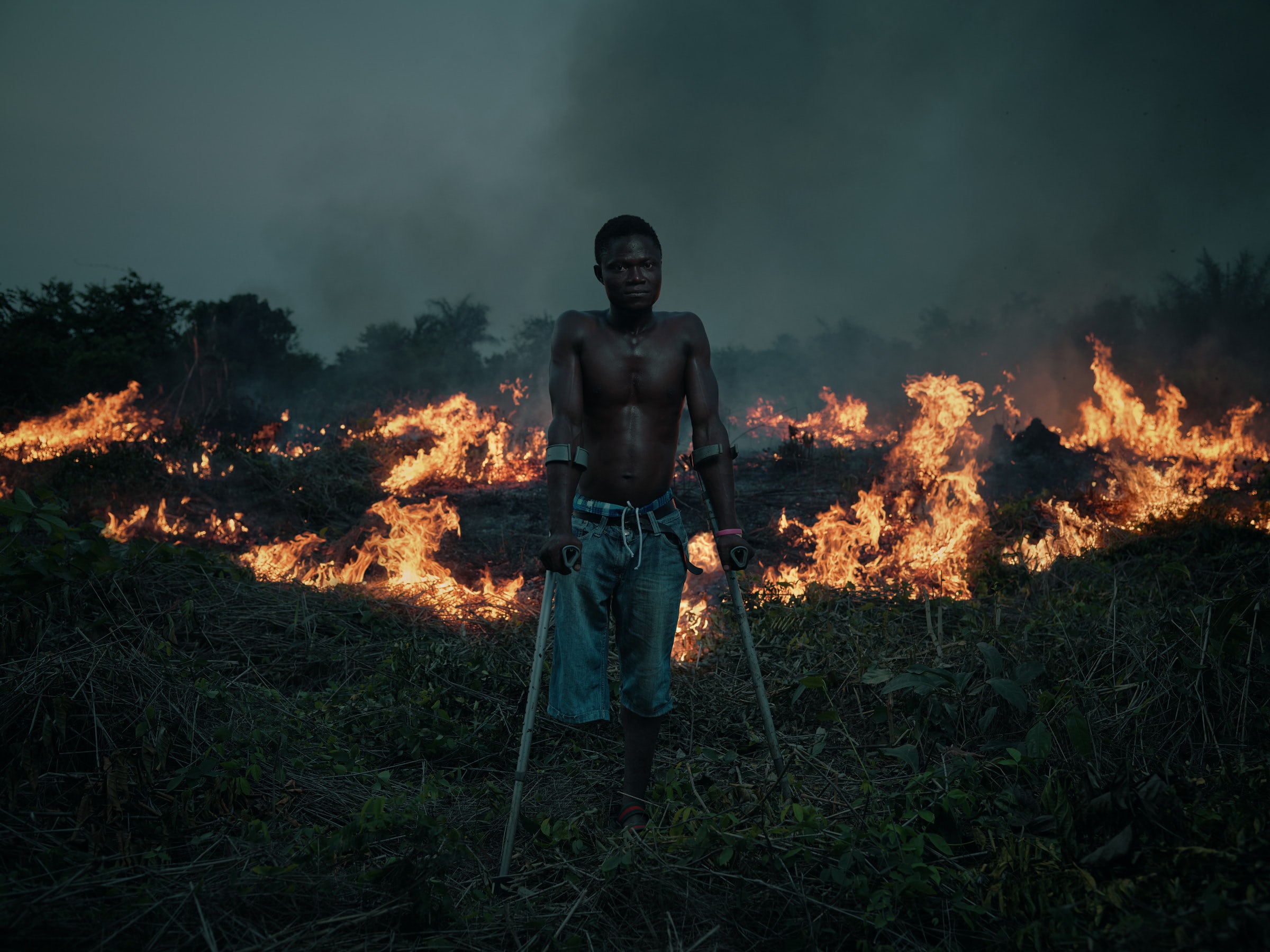 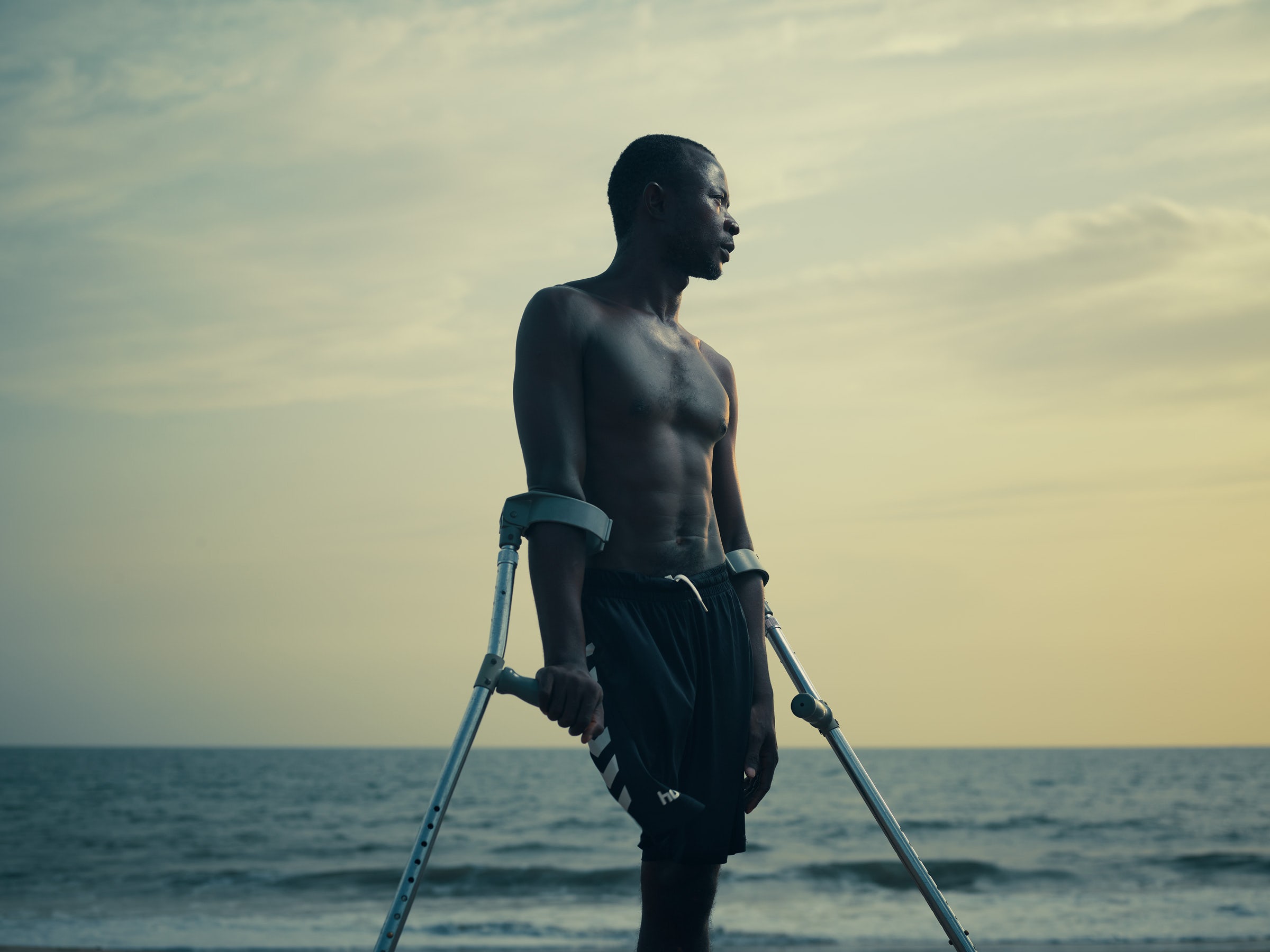