While there might be a certain aesthetic traditionally associated with rock bands, Foals have shifted gears entirely in the new video for Like Lightning, from the second half of the band’s two-part album Everything Not Saved Will Be Lost.

The playful video was created by French animator Virginie Kypriotis, and has climate activism at its core. It follows the recent release of Rip Up The Road, a feature-length documentary that takes a closer look at the individuals behind Foals.

“We wanted to work with Virginie as she has a brilliantly distinctive and fresh visual style,” Foals frontman Yannis Philippakis tells CR. “It’s new for us to work with animators and was an exciting left-turn in comparison to the other videos in the Everything Not Saved Will Be Lost era.”

Kypriotis spent roughly three months on the project, from writing and storyboarding through to illustrating and supervising the animations. “The band gave the environment as a topic for the clip but then let us be creatively very free,” she tells us. From there, Kypriotis chose to dedicate the video to the absurdity of modern society, along with a tongue-in-cheek call to arms to ‘make the world great again’ – a message splashed across a cap (in oil) for good measure.

The animation follows a fuzzy protagonist, George, who in response to the state of the world – and the factors in its apparent demise – decides to run away. As we’re led on a marathon across the land, the story feels warmly reminiscent of Forrest Gump, another unassuming hero from decades past. 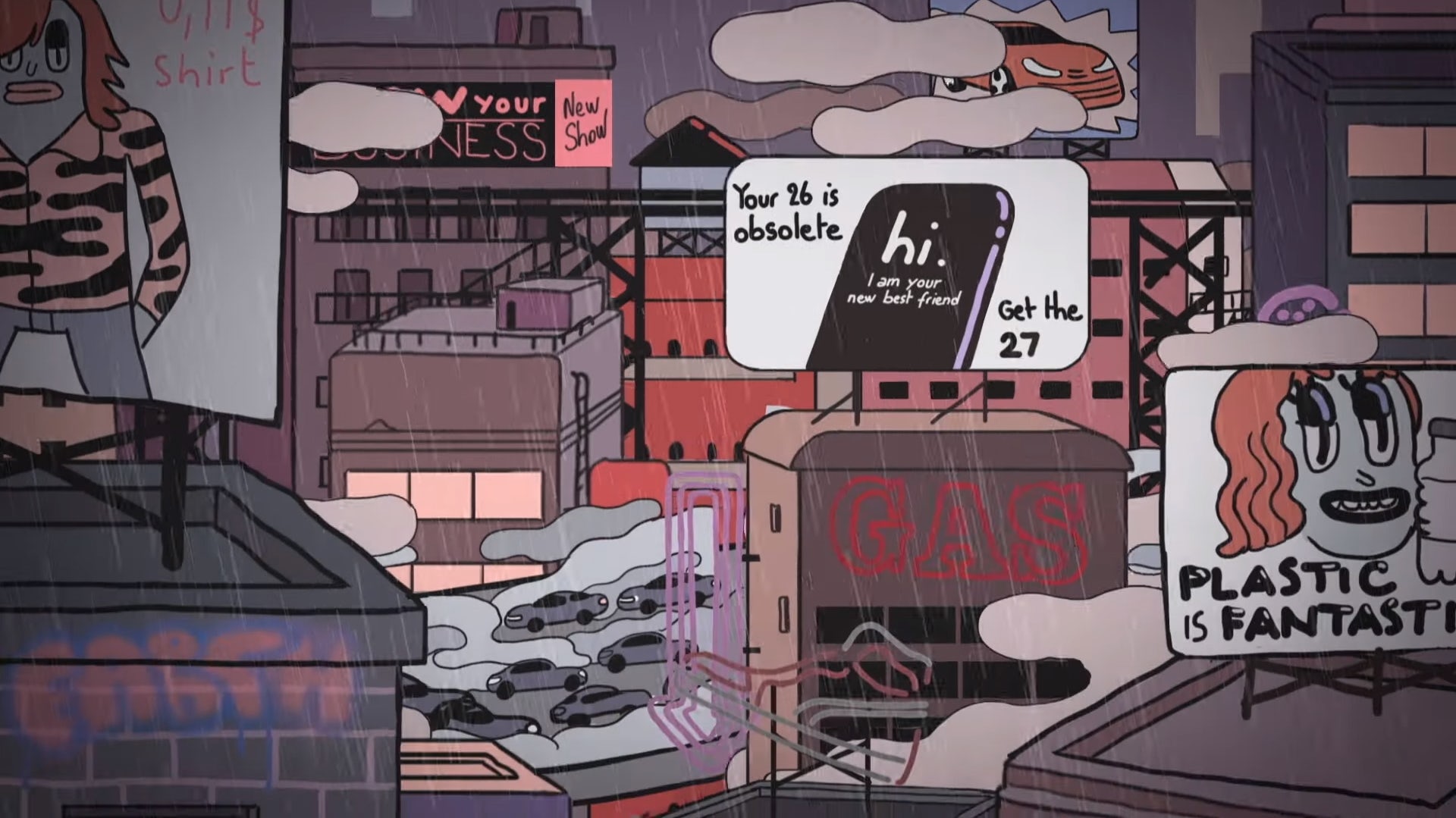 “In the lyrics, I wanted to convey a sense of perilousness, hubris and paranoia. All characteristics of the current time,” Philippakis says. “I wanted to tap into ecological collapse and the necessity of becoming bigger and better as a species in order to conquer the problems we face and head into a utopian future but also allow the listener to have their own space for interpretation.”

“[Virginie] has magnified the underlying themes of the song in a universally understandable and tangible way, taking the undercurrents of dismay in the song and putting an exclamation point on them,” he adds. 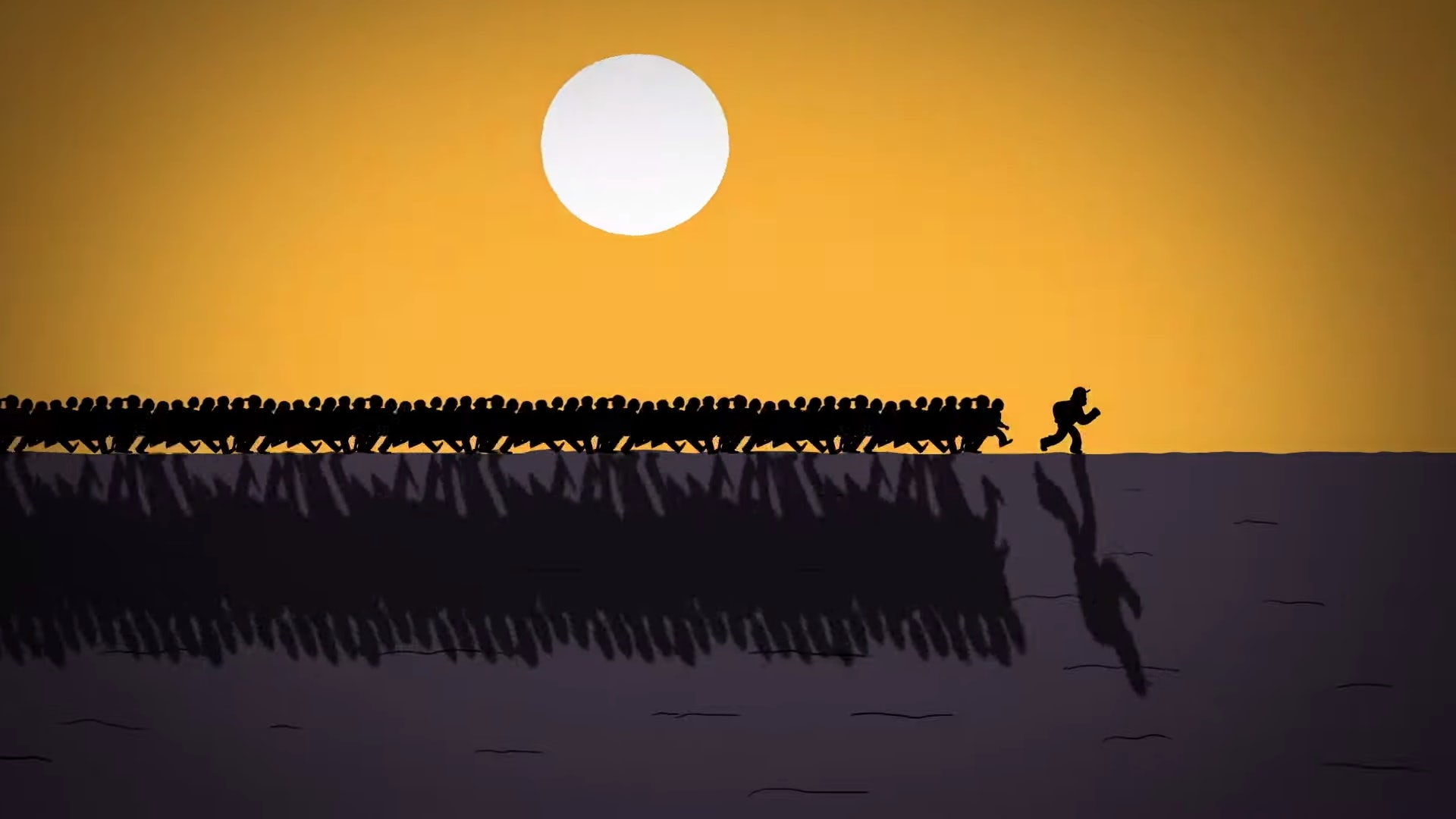 True to Kypriotis’ intricately detailed style, the video is filled with clever visual cues that nod to these new, damaging societal norms. Using recognisable references acted as a way for her to connect with viewers, while making them so over the top helps to put a light-hearted spin on a disheartening subject. “When the public find those Easter eggs in the video (and more generally in my work), I hope they relate to them and therefore make them laugh,” she says. “It’s a way for me to engage with the viewers and to add a layer of relevancy to the storytelling. We are all part of the world depicted in this video.”

The animation also draws on harrowing images that will be familiar to many, albeit filtered through Kypriotis’ colourful, comforting vision. “I think that animation allows us to touch on difficult subjects with humour and without making viewers confront realistic images that can sometimes be hard [to process] and depressing,” she says.

“Animation can create a distance from reality, which then allows subjects and ideas to become more widespread, from children to adults, to different cultures. It is also easier to describe abstract ideas through drawing and animation,” Kypriotis points out. “For example, George, the hero of the video, who helps humanity reconnect with nature, is a mix of wild animal with something more fantastical, which makes him good to represent both the natural world as well as a part of all of us.”

Everything Not Saved Will Be Lost Parts 1 & 2 are out now on Warner; @virginiekypriotis