Illustrator, animator and designer Franz Impler grew up in a family of craftspeople in a small village in Bavaria. “There wasn’t that much art around me,” Impler tells CR. “But growing up so close to nature gave me a lot of freedom and the possibility to unfold my imagination.”

Early on, Impler discovered his love for images and film and how they could help him realise all the things he was seeing in his head. Impler went on to study graphic design and illustration at the Academy of Fine Arts Leipzig, and picked up animation later on. “Maybe the most important thing I learned there was to follow my own way,” explains Impler. “To create stuff which excited me no matter if it fitted into the academy or the expectations of anybody. In the environment of the academy, you can do art that you think others will like, but it’s not what you really want to create.”

Impler’s work is self-described as “very digital and artificial”. As a child of the 90s he grew up surrounded by the first generation of Nintendo and PlayStation. “I think children have the ability to dive into visual worlds very easily no matter if the aesthetic is incorrect or imperfect,” he says. “I kind of grew up in this low-poly video game world, and even though I don’t play these games anymore, they still feel like home to me.” 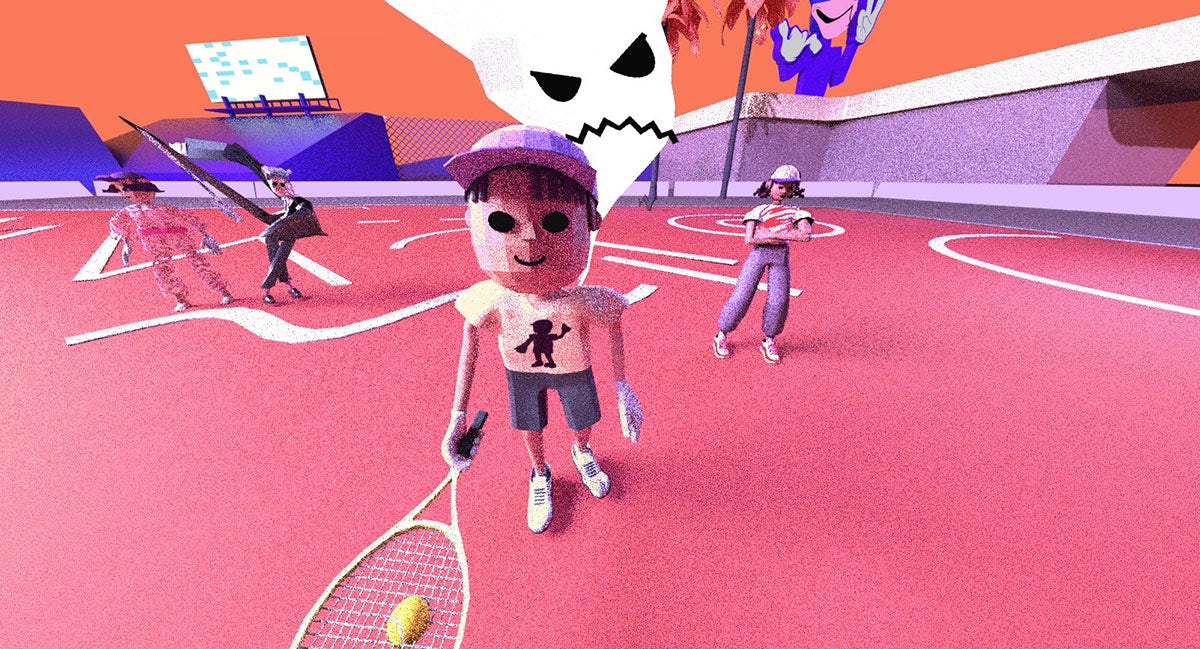 To bring these worlds to life in his work Impler unintentionally sticks to a fairly restrictive colour palette full of pink, orange and purple. “I think it’s a matter of taste, and the colours I use do change from time to time,” he says. “In my recent works I wanted to use colours that taste very sweet and artificial, like children’s chewing gum. On the one hand you enjoy chewing it, but at the same time you know there is something wrong with it.”

Impler’s animation Out of Bounds fits this sickly palette and video game aesthetic perfectly and while the full film is still on the festival circuit, the one-minute trailer alludes to the multi-coloured chaos. “Out of Bounds is about a video game character that is drifting out of his own game into an out-of-bounds world,” explains the creative. “This world is a bit weird and inconsistent and hardly comprehensible, a bit like the real world I guess. It’s about boundaries and rules in games, and also about the inner boundaries and rigidity in oneself.”

The film is Impler’s diploma project and after a year in the making he finished it just last month. Alongside this mammoth project, the creative also been busy creating comics and zines with Lina Ehrentraut, Malwine Strauss and Eva Gräbeldinger as a collective called Squash, as well as some freelance poster and animation work and other personal projects on the side.

With most of his projects Impler carries around the idea in his head for some time and often gets inspired by the topics he’s reading about, or the music he’s listening to. “Then I start drawing some sketches and little storyboards to make the idea more tangible, and when it feels ready I just start,” he explains. “The cool thing about working with 3D software is that you can change everything very easily. You can just start building stuff and when you notice that something doesn’t work, you can change it without having to do it from scratch.”

For Impler, storytelling is the main crux of his work and with animation it gives him multiple possibilities to tell a story though he still sees the value in still illustrations. “I don’t want to say that one is better than the other. It’s just different tools you work with. For example, the time. You have control over how long the audience can see an image or a scene, how fast or slow something is,” he explains.

“You can use this for the storytelling to create irritations, overload, suspense, boredom and so on. With 3D animation you can work spatially. You can move the camera through the set and are able to walk around in your own creation. That’s great!”

Though animation can be time-consuming, having a year to work on Out of Bounds has made Impler sure that another short film is on the cards for him.

“I’d love nothing more than just starting with the next one now,” he says. “Creating my own films from the ground up is absolutely the kind of project I enjoy working on most. Building completely new worlds is extremely fun!”