Thomasina Miers and Mark Selby opened their first Wahaca restaurant in 2007. At the time, good Mexican food was hard to come by in London, and the pair were keen to show that there was more to the country’s cuisine than nachos and fajitas. The brand has since grown into a national chain, with 18 branches in London plus restaurants in Cardiff, Brighton, Bristol, Edinburgh, Liverpool, Manchester and Southampton.

With vibrant interiors, murals, and dishes inspired by popular street food, Wahaca’s restaurants aimed to bring the colours and flavours of Mexico to the UK high street. Over the past 11 years, the brand has helped change perceptions of Mexican cuisine and paved the way for new Mexican restaurants, pop-ups and street food stands in London and further afield.

This week, Wahaca launched a new visual identity created by London studio Without. The brand has introduced a new logo – an image of a fist holding a taco – along with a new typeface, a reduced colour palette and a refined tone of voice. 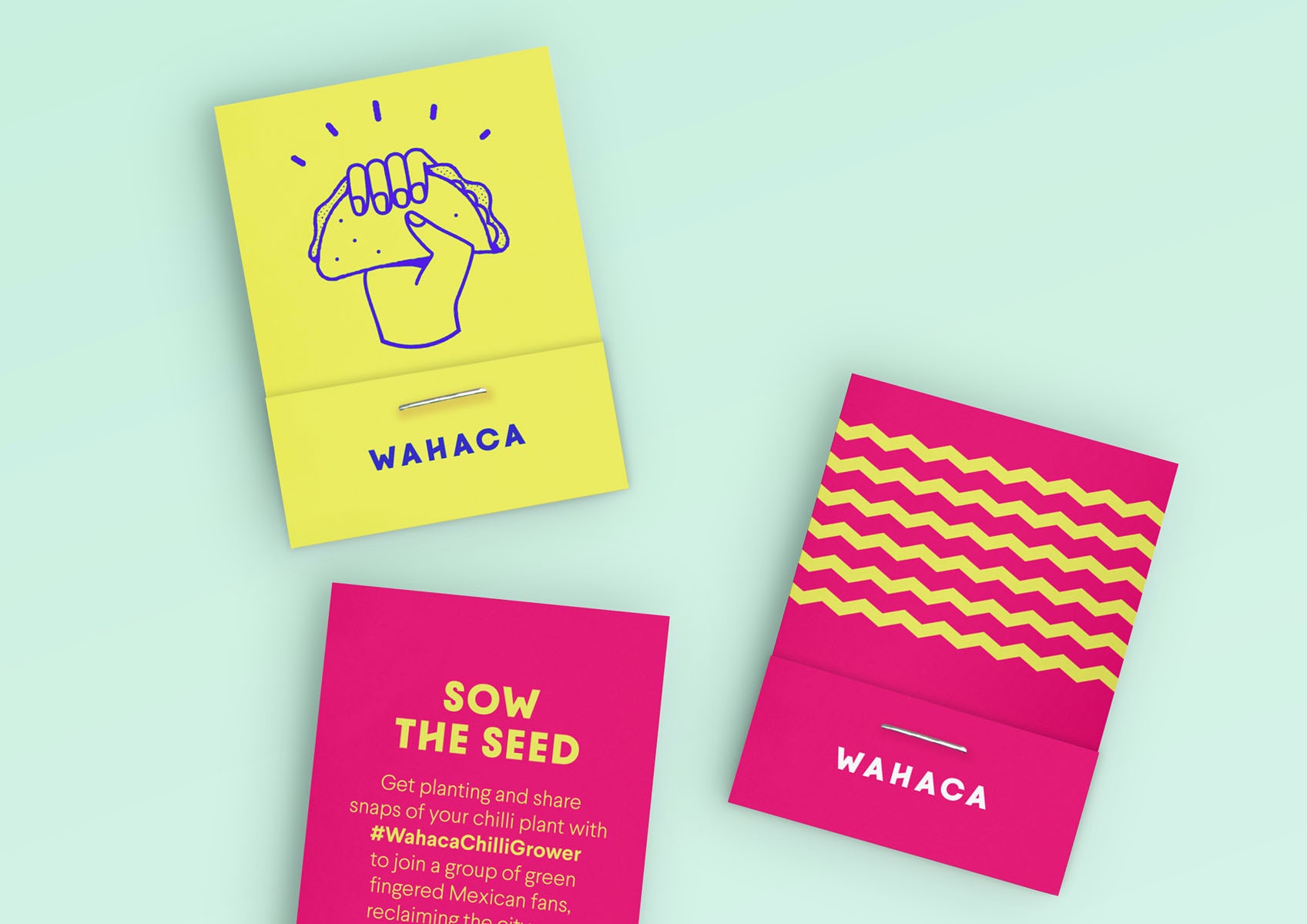 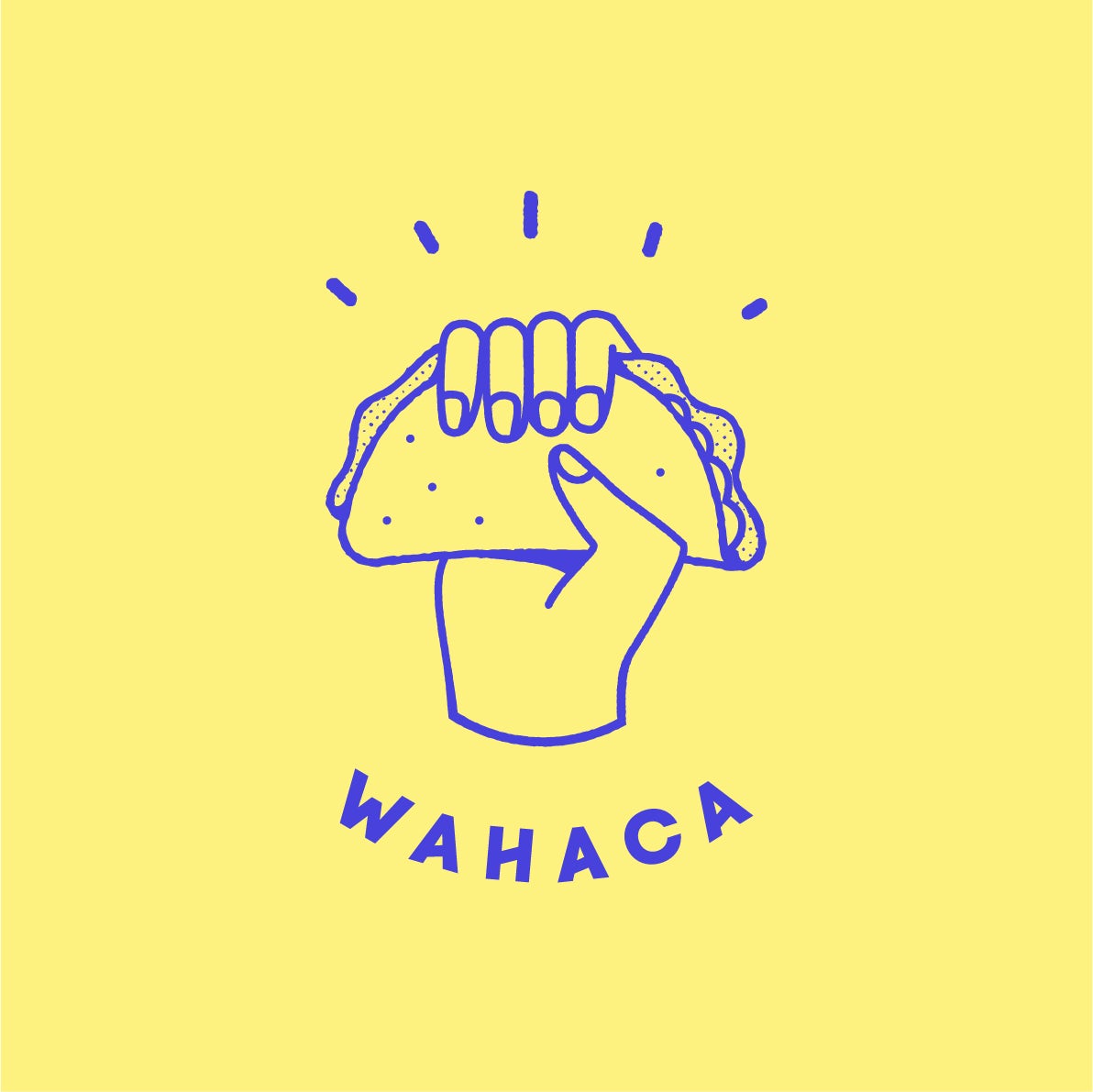 Without has been working with Miers and Selby since Wahaca was founded. The studio created the brand’s original visual identity, which was inspired by market stalls, street food stands and the colourful hand-painted lettering found across Mexico. The new look sees Wahaca move away from this hand-crafted, street food-inspired aesthetic towards a cleaner and more consistent look – a change that Grant says reflects its growth from a start-up to an established chain.

“Wahaca has got a lot bigger, so the central team that drove the initial growth can’t be hands-on across all the sites,” says Without’s Creative Director Roly Grant. “As [the brand] expanded, I think the team needed a bit more guidance as to how to set things up in say, a shopping centre in Manchester. On a technical level, [the identity] needed to be a bit simpler and a bit more robust.”

Grant says Wahaca’s identity had become “a little fragmented and slightly ad-hoc”. Without has been working with the brand on a weekly basis, creating menu designs as well as seasonal campaigns, but over time, it had amassed a diverse set of visual assets. The rebrand was partly about reducing the brand’s toolkit to a core set of graphics that could be used to create a consistent look and feel across Wahaca’s various restaurants. 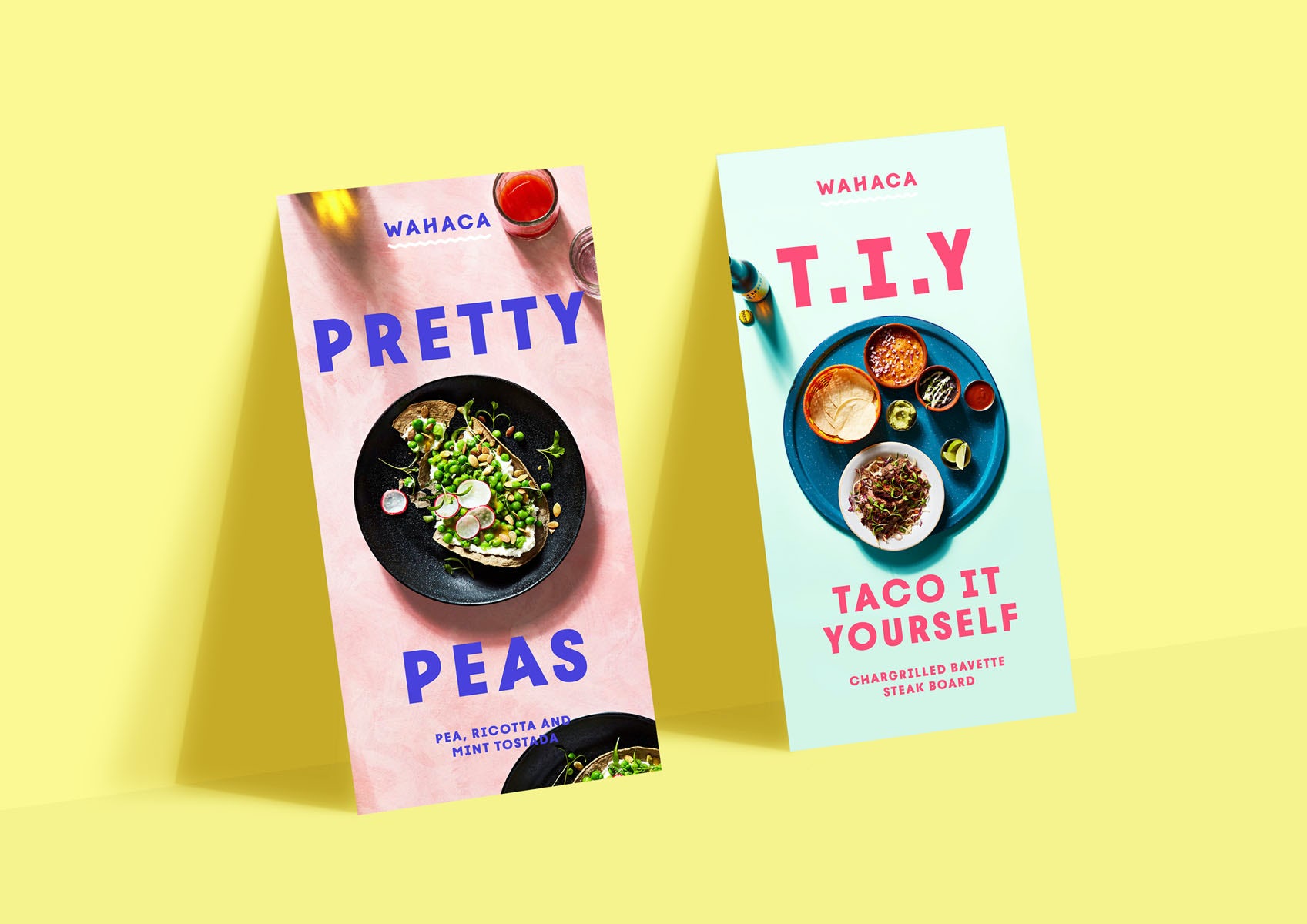 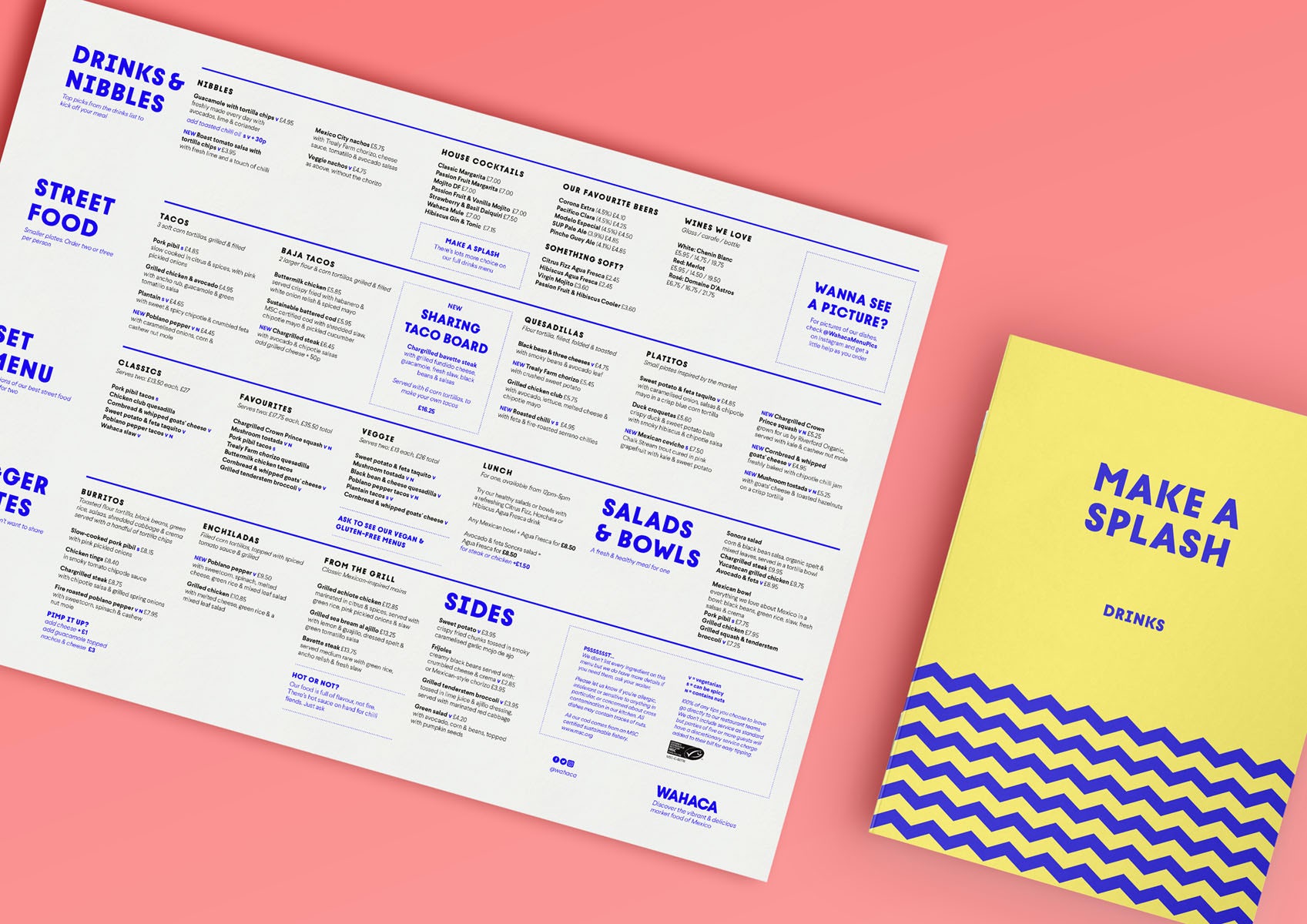 “The danger of working in an ad-hoc way is that you look back over a period and you realise you’ve done some crazy stuff with the brand because you’ve been working on individual projects,” explains Grant.

“Over our lifespan, Wahaca have been able to pick up the phone and say, ‘can we have an illustration for this?’ or ‘can we have some photos for that?’ and we’ve tried to keep it all with the same spirit, but the estate had become quite diverse. It was a nice experience to say ‘look, what are the big messages?’ and really simplify these assets.”

The logo puts the taco at the heart of the identity. Grant says the brand wanted an instantly recognisable symbol that could appear on everything from staff t-shirts to signs outside restaurants – just like Nando’s chicken icon. “We also liked this idea that it was quite political. This fist raised in the air was a symbol of where Wahaca started which was [telling consumers] ‘forget about cheesy nachos and tequila shots – come to a place that serves real Mexican food’,” says Without’s Creative Director Roly Grant. 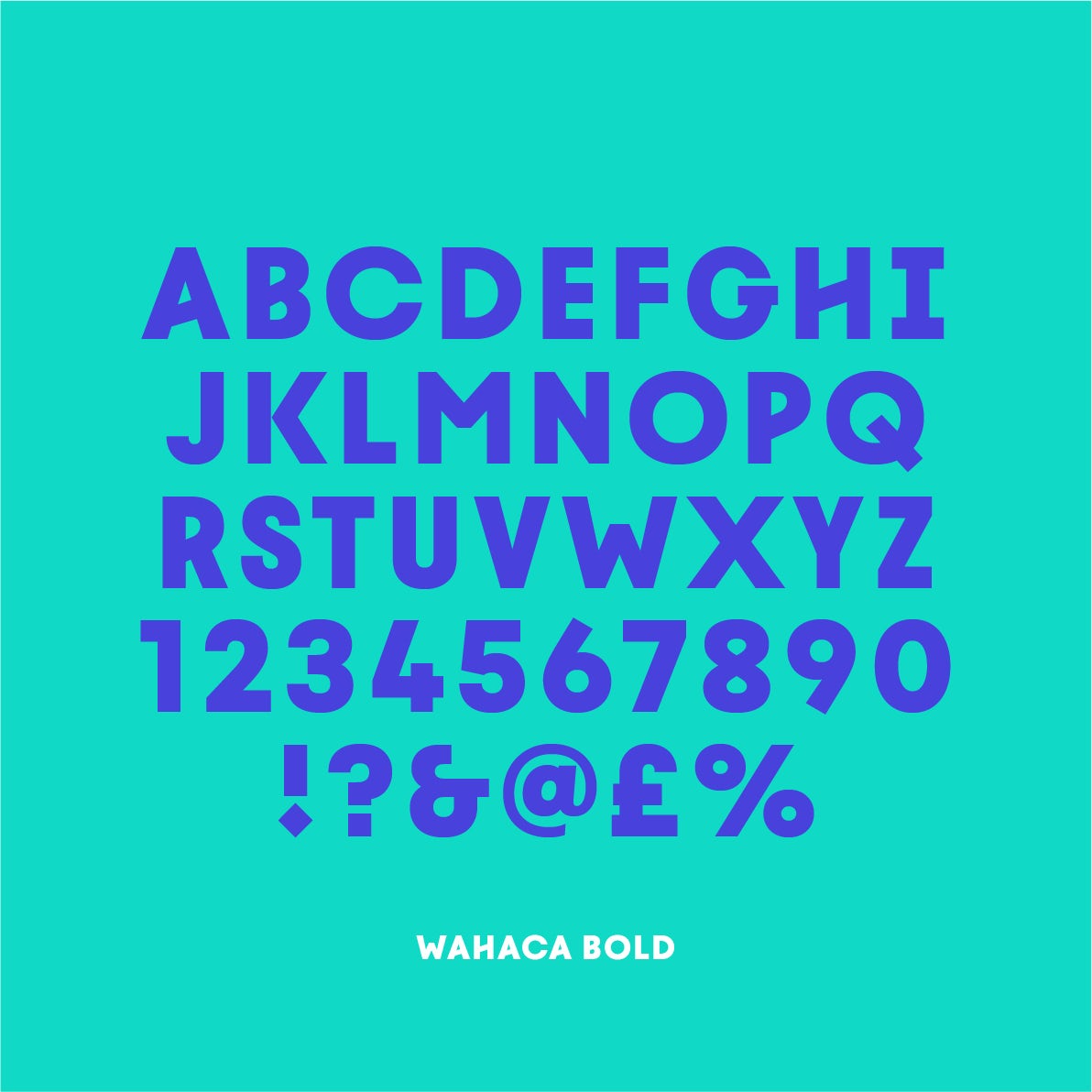 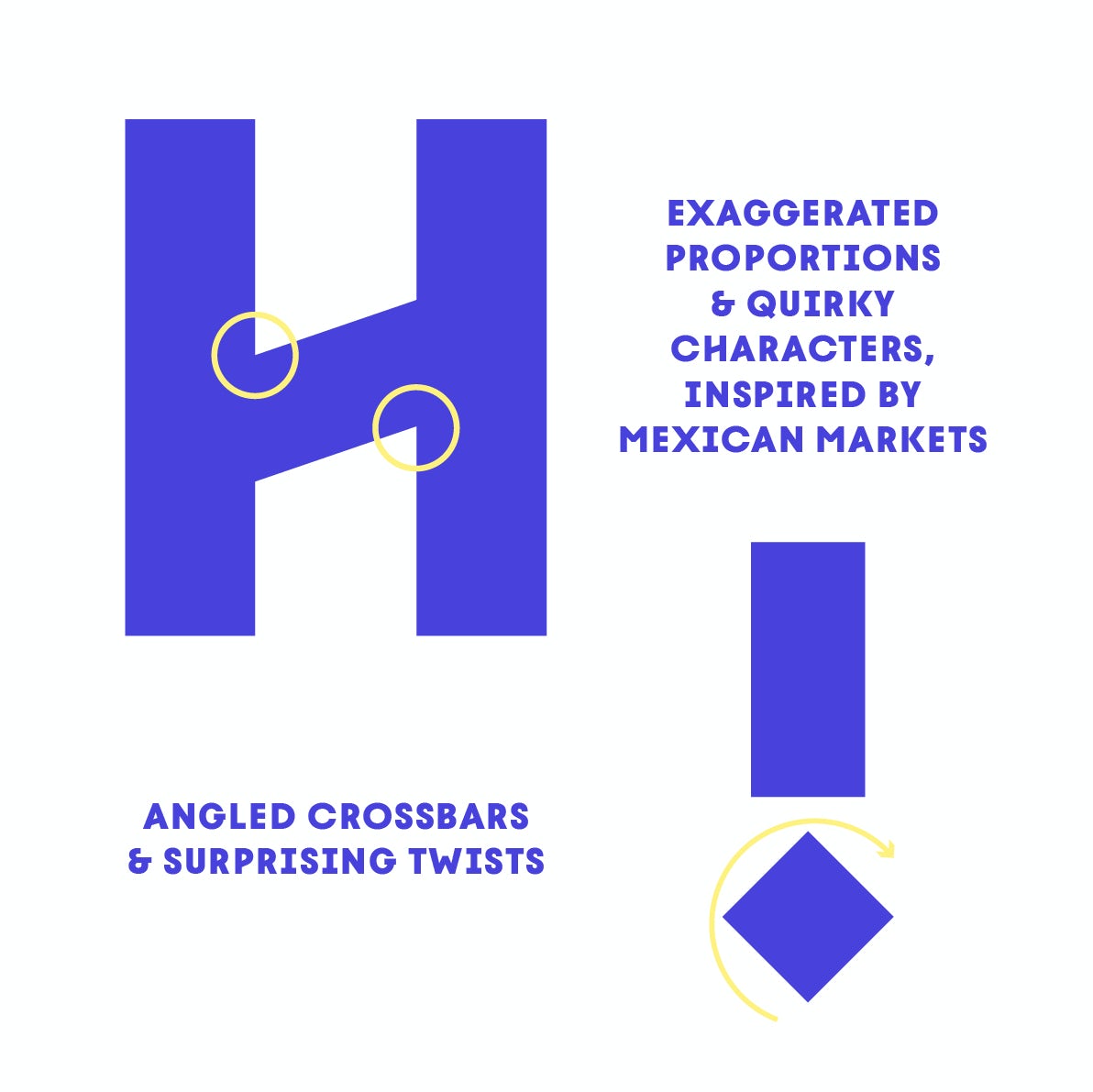 A bespoke typeface includes some distinctive features such as slanted crossbars while the new colour palette features bright pink, purple and blue as well as softer pastel shades. Marketing materials feature vibrant photographs of dishes, and a zig zag pattern is used alongside the taco logo on Wahaca matchbooks and menus.

The rebrand aims to shift perceptions of Wahaca from an authentic Mexican restaurant to a place that offers fresh and flavoursome food – namely tacos, tostadas and quesadillas. “Now – especially in the fast-casual sector – dining is probably more about formats,” says Grant. “People don’t see Dishoom as just an Indian restaurant: they go for the bacon naan roll they do for breakfast, or another signature dish.”

London in particular has seen a wave of restaurants all based around one staple item – from steamed bao buns to wood-fired pizza and burgers. Wahaca’s menu includes a range of traditional Mexican dishes but tacos are the star of the show, and the branding reflects this. “We’d never describe Wahaca as a taco restaurant because it offers much more than that, but it’s a bit like Pizza Express – you can have a lasagne, but [most people] go for the pizza,” says Grant. “It was really about trying to position [Wahaca] as a place for sunny, vibrant food [with a focus on] tacos and tortillas,” he adds. 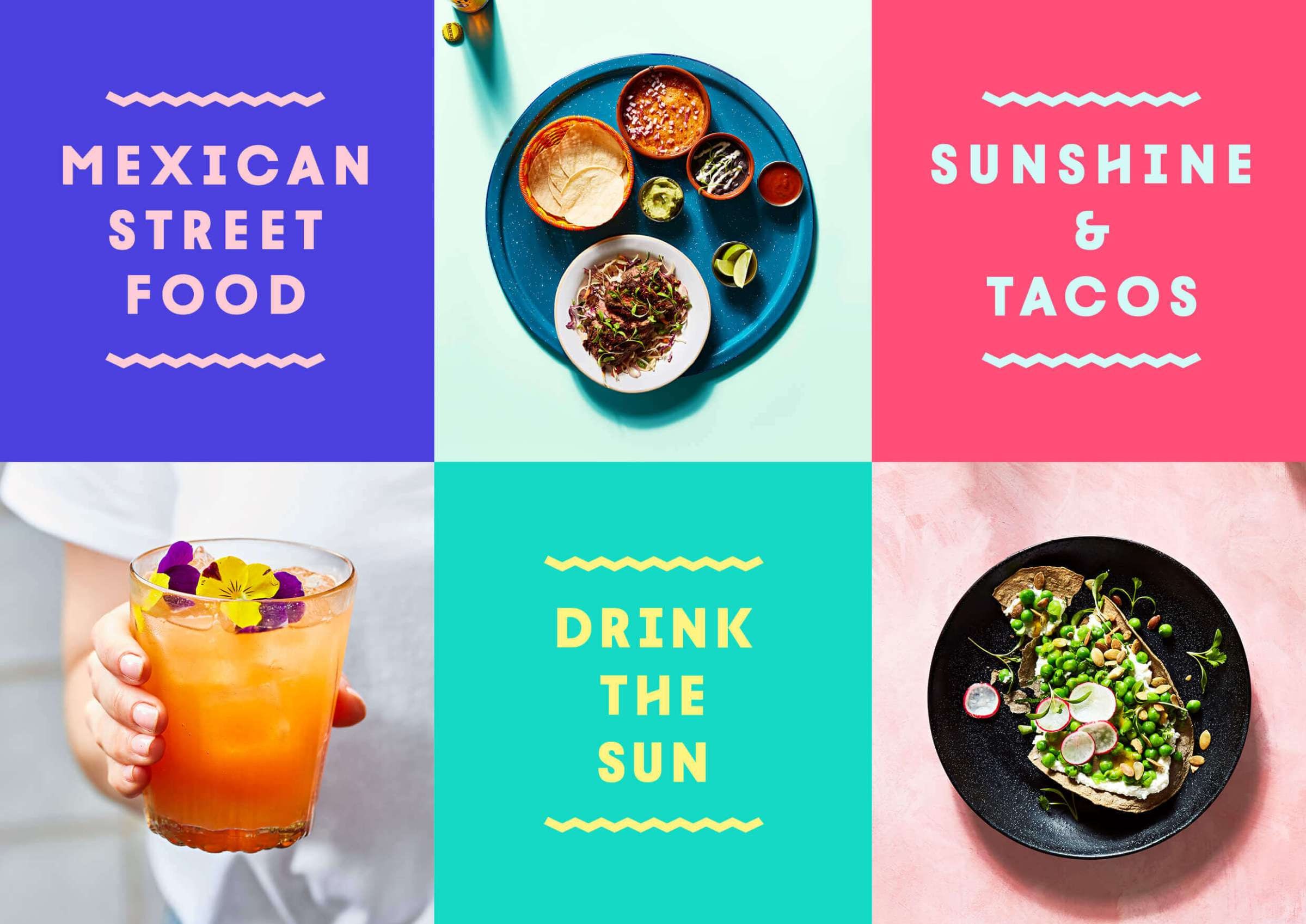 Wahaca’s use of mismatched furniture, distressed materials and hand painted-effect type was innovative and unusual in the mid-2000s, but this aesthetic is now commonplace in casual restaurants – and Grant says this posed a problem for the brand.

“Wahaca tried to bring the language of the streets and markets into a restaurant space. There was a lot of vibrant colours and distressed graphics … and there was a sort of mend and make do approach with mix and match furniture,” explains Grant. “That was quite innovative at the time, but it’s been replicated all over the place. Before you know it, you go into a train station, and there’s a branch of Giraffe that looks just like Wahaca and you think, ‘we probably need to change now’. I think that was our feeling when we did a brand audit – looking around at Wahaca, what started off as quite a fresh language had become quite ubiquitous on the high street. 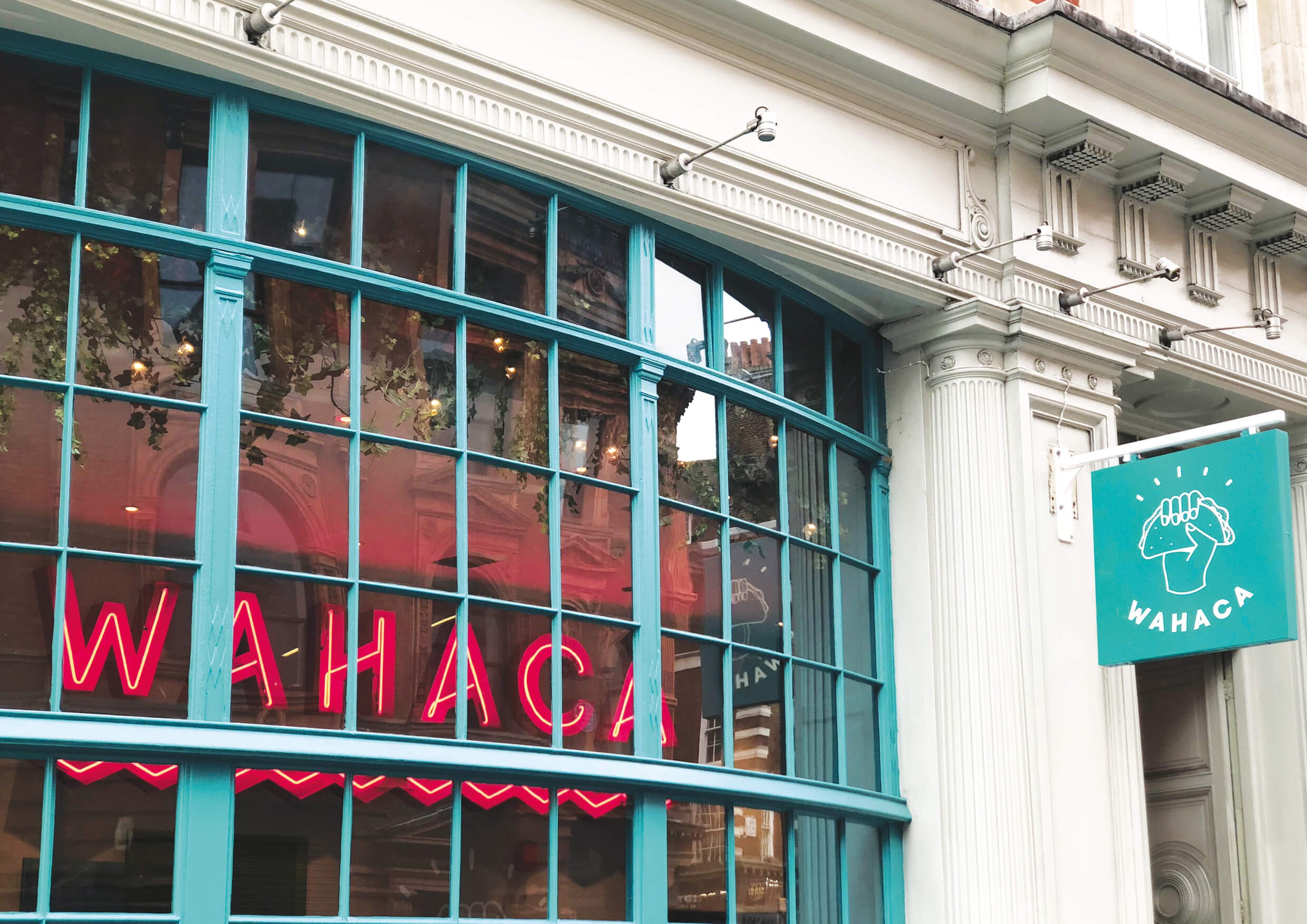 The new look feels a little more corporate – distressed textures, imperfect lettering and hand-drawn illustrations have been replaced with a cleaner but less eclectic visual style – but Grant says it was time for Wahaca to “be honest” about the fact that it has evolved from a start-up to a chain. “There’s a lot of start-up spirit still in Wahaca – the founders are still really involved – but they are a big beast now and they do need a brand that can land [anywhere in the UK] and people just get it,” he adds.

The new identity gives internal designers a more manageable set of assets to work with and gives the brand a fun and recognisable logo to use across its communications. “The point was reducing it down to some really bold elements that can be used across a variety of things,” adds Grant.