High-end fashion, retro computer games and cats aren’t perhaps an obvious trio. But a new project from digital agency Smack proves that the three divergent interests can work together rather beautifully in the name of gamified brand awareness in Maison Karl Lagerfeld.

The online and in-store digital activation for the fashion brand is a little like a pixel-based, 21st century take on 90s TV classic Pets Win Prizes, created to promote Karl Lagerfeld’s new Pixel Collection. The late fashion designer behind the eponymous brand’s famous cat Choupette (who’s clocked up more than 270,000 Instagram followers on the fan page @ChoupettesDiary), is the star of the game. 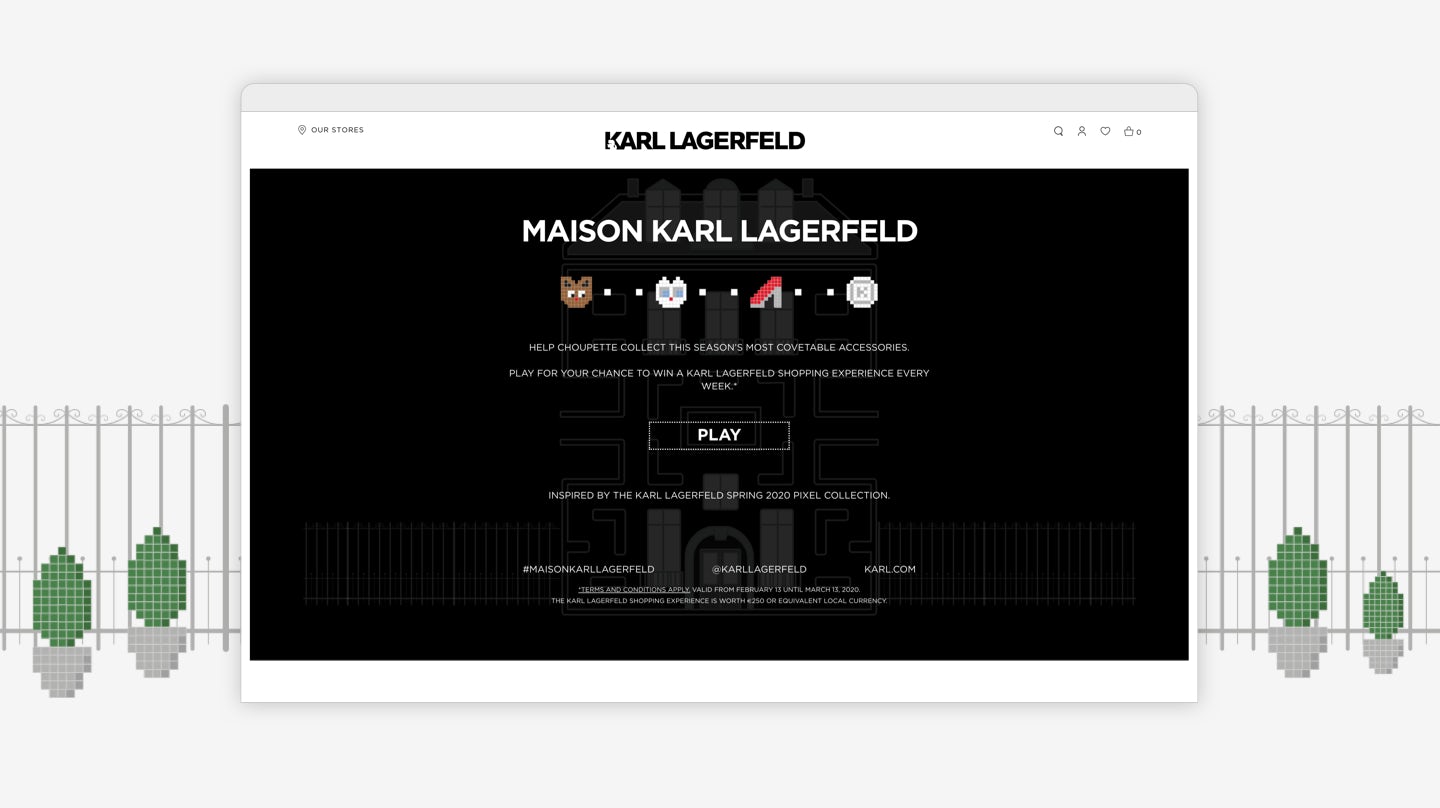 The aim of the PacMan-style game is to help a little digital Choupette “collect this season’s most covetable accessories” in pixel form, with users offered the chance of winning a Karl Lagerfeld shopping experience every week until 13 March, to the tune of a €250 (around £208) gift card. In an old-school approach to online gaming, players use their computer’s arrow keys to move the wee kitty around, collecting ‘Karl Koins’ to protect him from various menacing dogs.

Smack was briefed to create a digital activation that would complement the 8-bit style pixelated designs of the new range, and approached the project by keeping the brand’s familiar iconography at its centre – Choupette navigates a simplified version of the brand’s headquarters at 21 Rue Saint Guillaume in Paris, with the maze he has to move through based on the architecture of the building. The physical site’s signage, fence and plants are shown to underscore the surroundings and keep the brand’s heritage and its founder at the fore in what might seem to many to be an unusually playful move for Karl Lagerfeld. 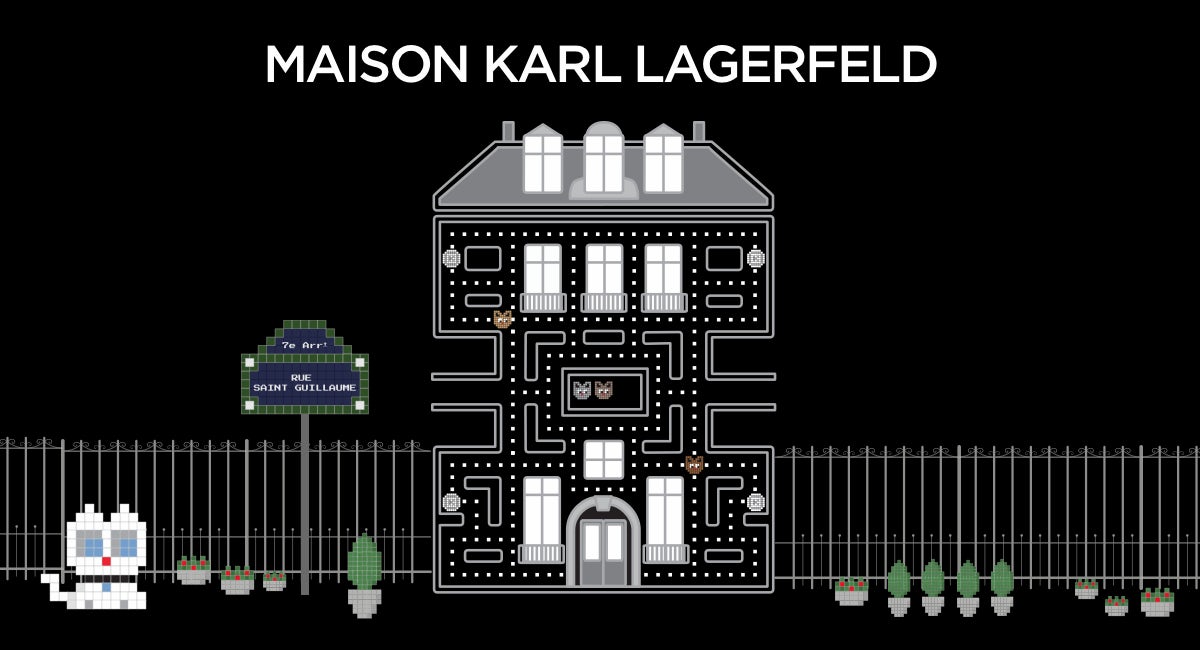 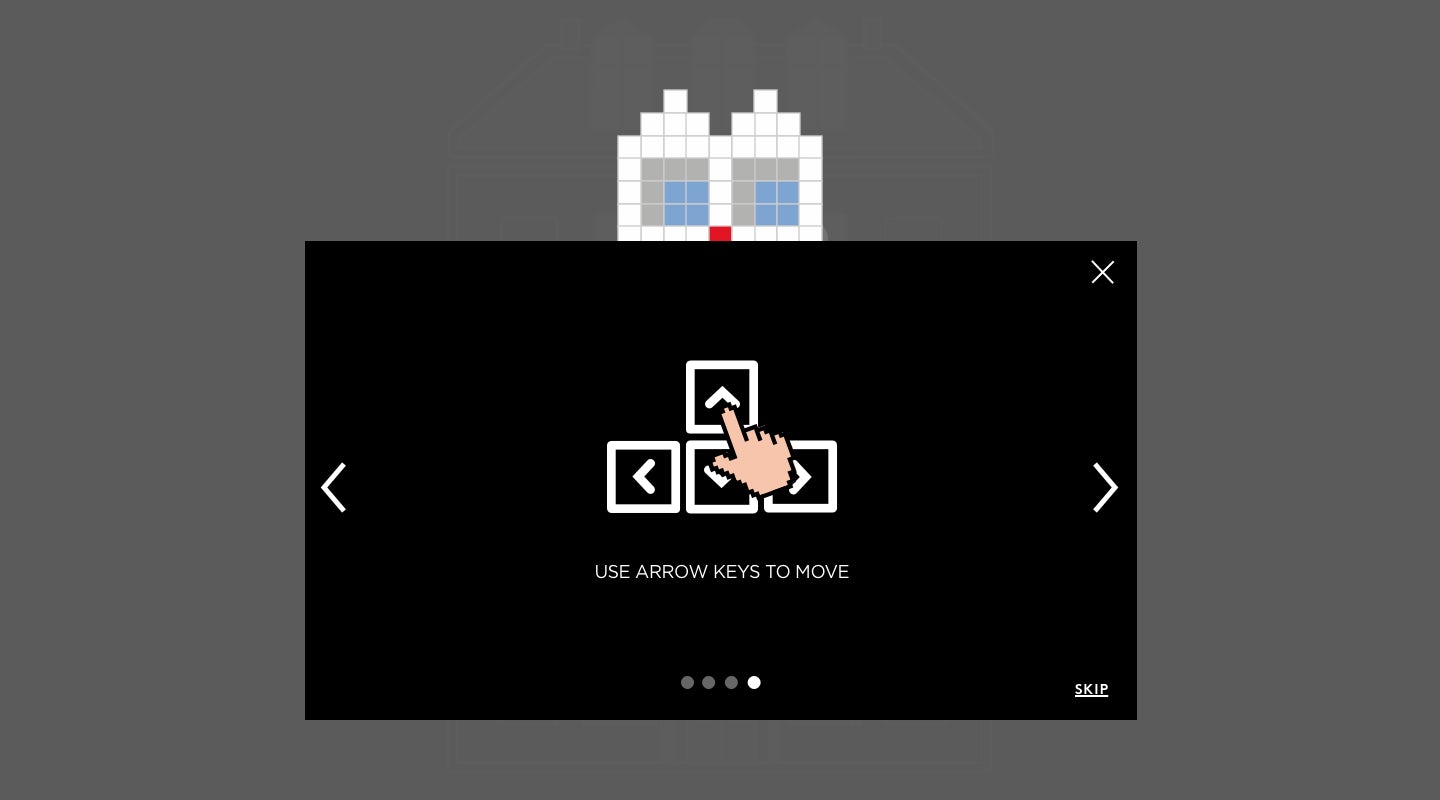 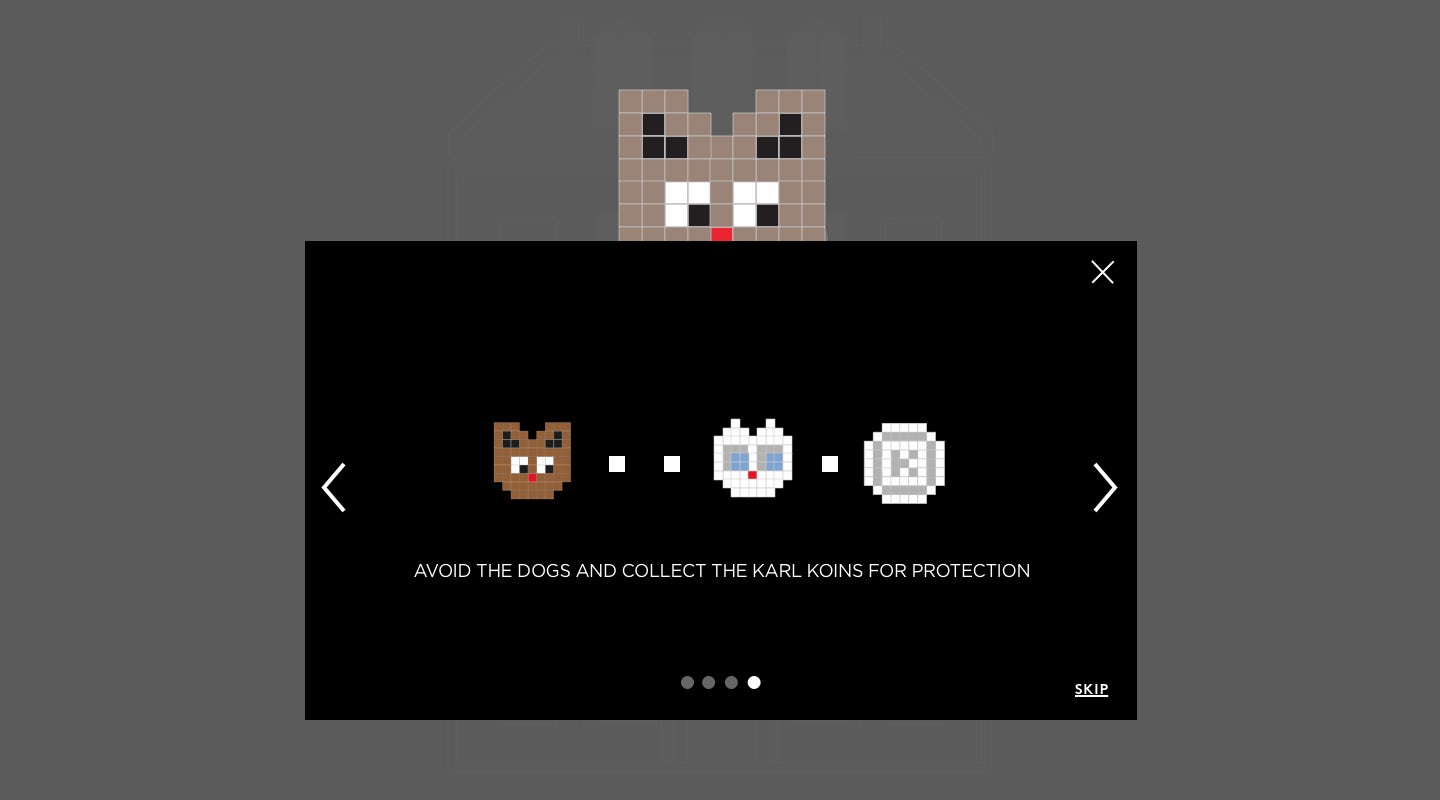 The agency also created new animations and promotional videos for use on the Karl Lagerfeld Facebook and Instagram pages, its newsletter and in-store promotions. “Fashion and beauty brands are increasingly looking to games and gamification as another way to engage fans and broaden their experience of the designs and styles they love,” says Smack creative director Lubna Keawpanna. “Consumers enjoy seeing their favourite brand in another context, and they want to be able to share something unique with their friends.”

The gameplay is familiar to anyone who’s ever played PacMan, with chip-tune-style intro music and game sounds to add to the arcade feel. Maybe it was my personal incompetence with gaming, or my painfully slow internet connection, or maybe the game is still slightly buggy, but the arrows seemed to rarely work and my own Choupette fared very poorly; quickly falling prey to the hounds and often remaining stuck in his original position. It’s unclear whether or not the score affects the users’ likelihood of winning the prizes; though by submitting your name and email at the end users are automatically signed up to the Karl Lagerfeld newsletter in a smart marketing move. 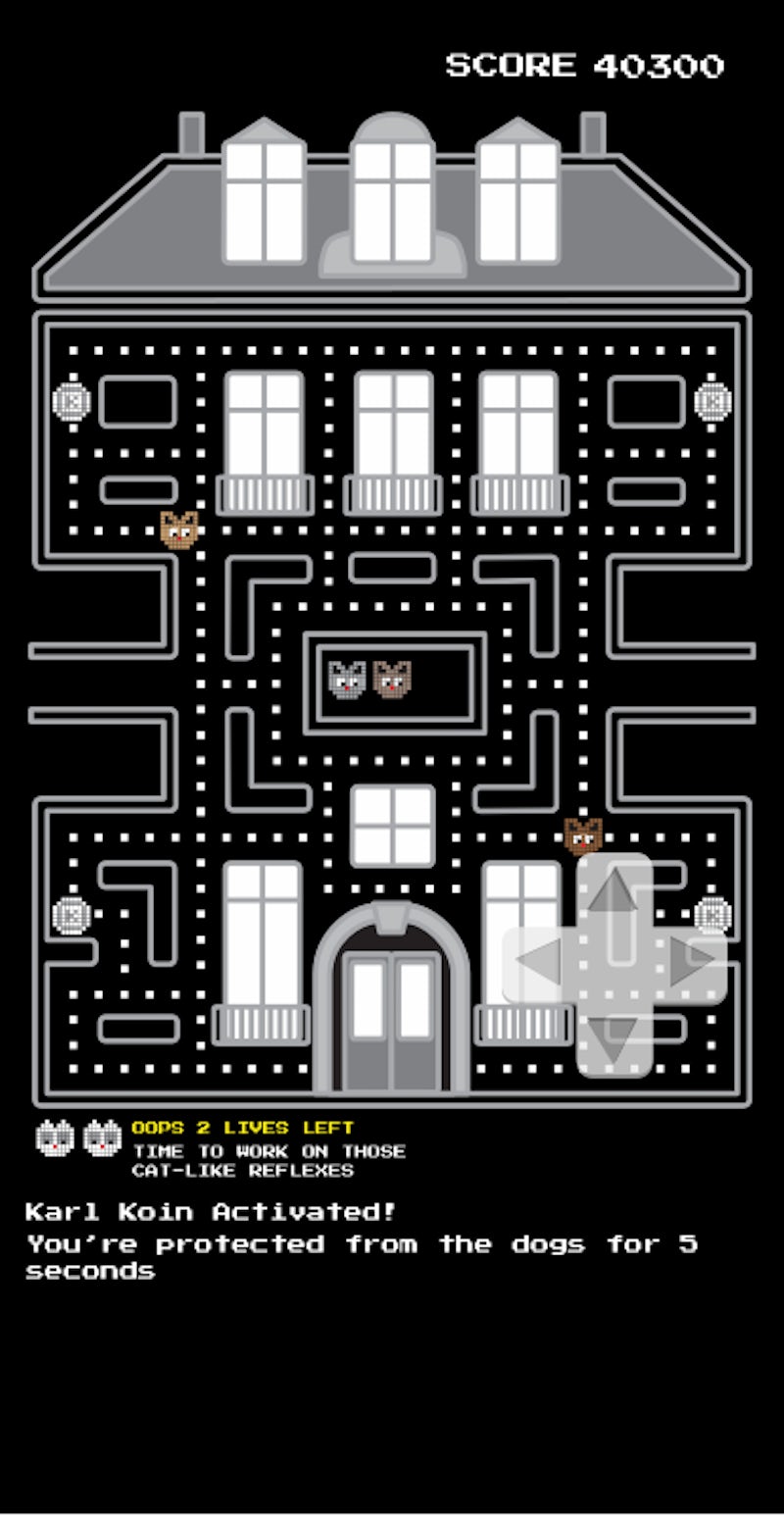 The game was designed on HTML5 and can be used across desktop, tablet and mobile devices until the promotion ends on 13 March on the devoted page on the karl.com global flagship store, which currently reaches 96 countries.

The Spring 2020 Pixel collection launched on 13 February with a range comprising ready-to-wear pieces and accessories featuring pixelated artworks of Karl and Choupette in primary shades of red, yellow and blue. Pieces include a bag with a monochrome depiction of the late designer’s sunglasses; a bum-bag (or ‘waist bag’ in the brand’s terminology) with a QR code artwork that links to the brand’s homepage when scanned; and pieces such as a wallet and T-shirts bearing square-based depictions of Lagerfeld’s distinctive ponytail-sporting face.