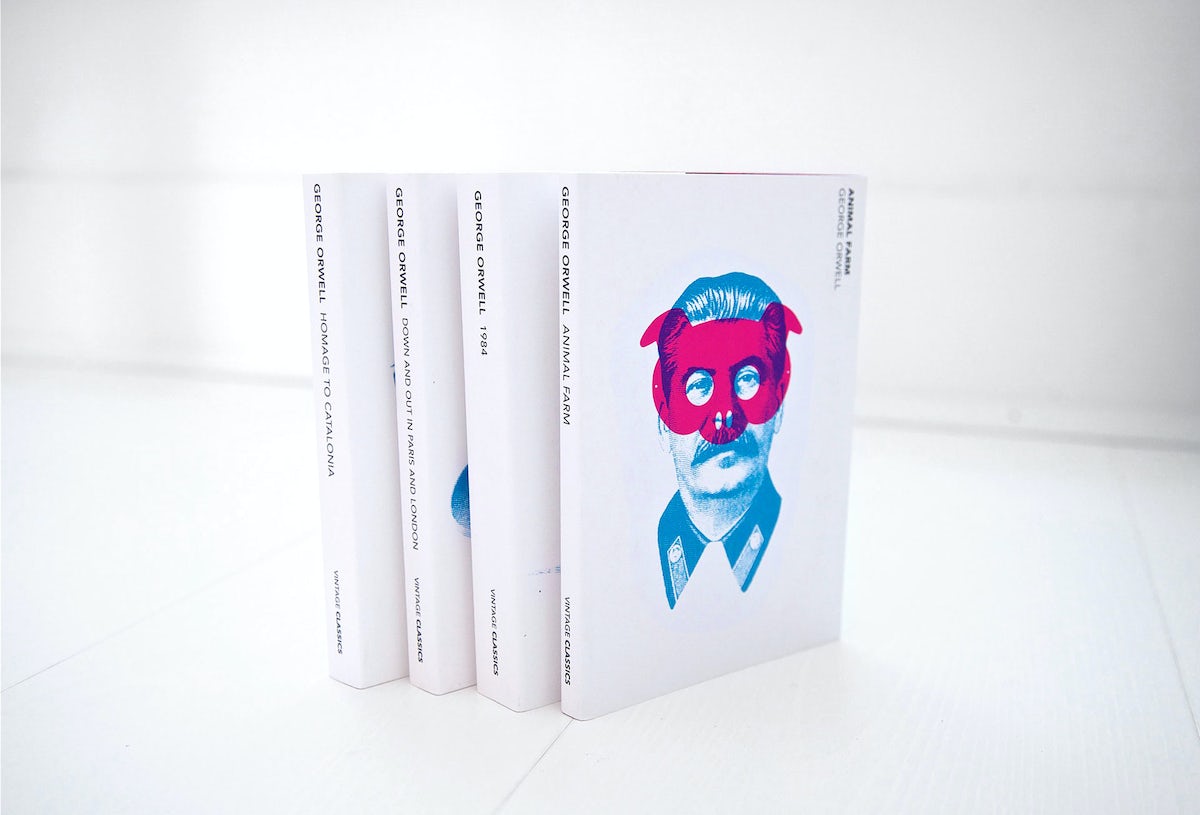 Reimagining one of Penguin’s classic titles would be a dream commission for most designers, let alone being let loose on the work of arguably England’s most celebrated writer, George Orwell.

The author and social commentator’s most famous work, Nineteen Eighty-Four, has been reimagined by everyone from designer David Pearson to illustrator Noma Bar in recent years.

The latest artist to put their stamp on the world of Orwell is Heath Kane, who was commissioned by Penguin’s Vintage imprint to reimagine four of the author’s best known novels to mark the 70th anniversary of his death. 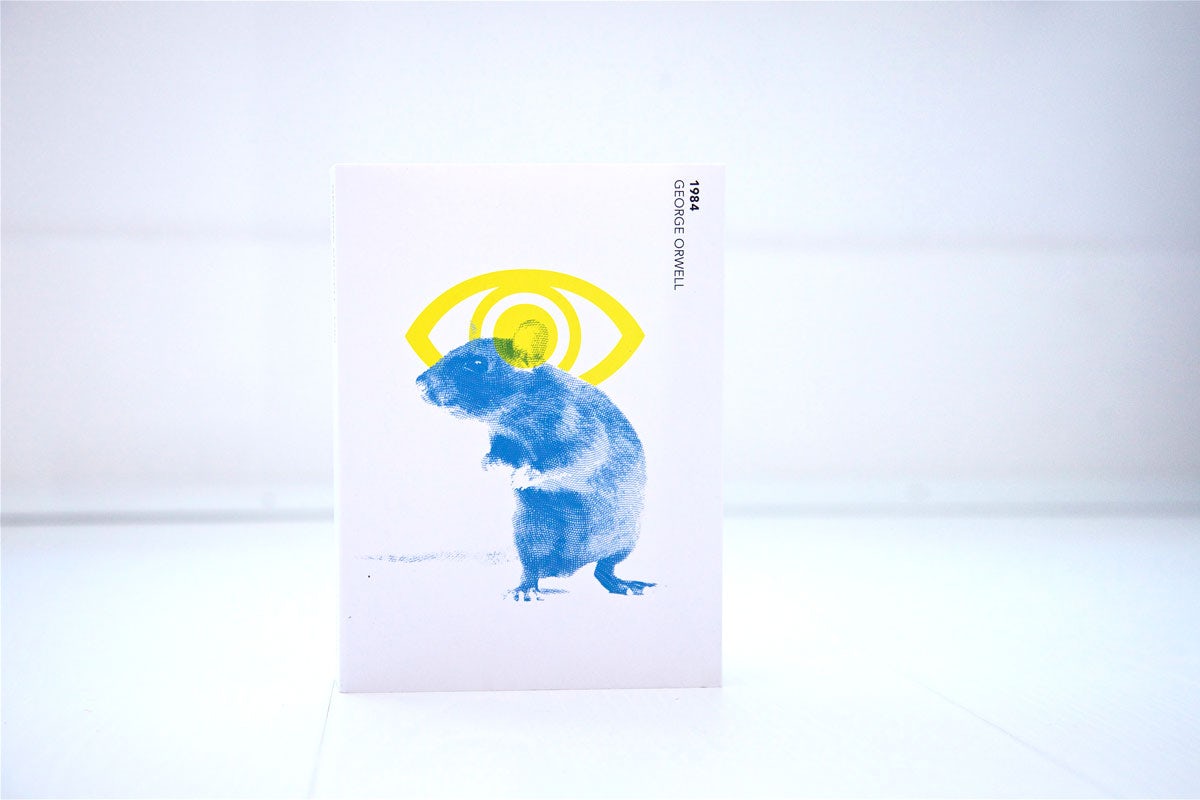 Since coming to prominence with his Rich Enough to be Batman series, Kane’s subversive paintings and prints have appeared in galleries and on magazine covers around the world.

Vintage creative director Suzanne Dean approached Kane in May last year to work on the series. “In the brief they were set on the concept of creating ‘duality’. It was described as an aesthetic inspired on two of my collections, Rich Enough to be Batman and Masks of Fear, in which I rather simply overlaid masks over faces,” he says.

“They envisioned approaching the title art in a similar way by combining two themes into one, such as Stalin and Hitler for 1984, fascists and anarchists or press and lies for Homage to Catalonia, rich and poor for Down and Out in Paris and London, and Stalin and the pig for Animal Farm.” 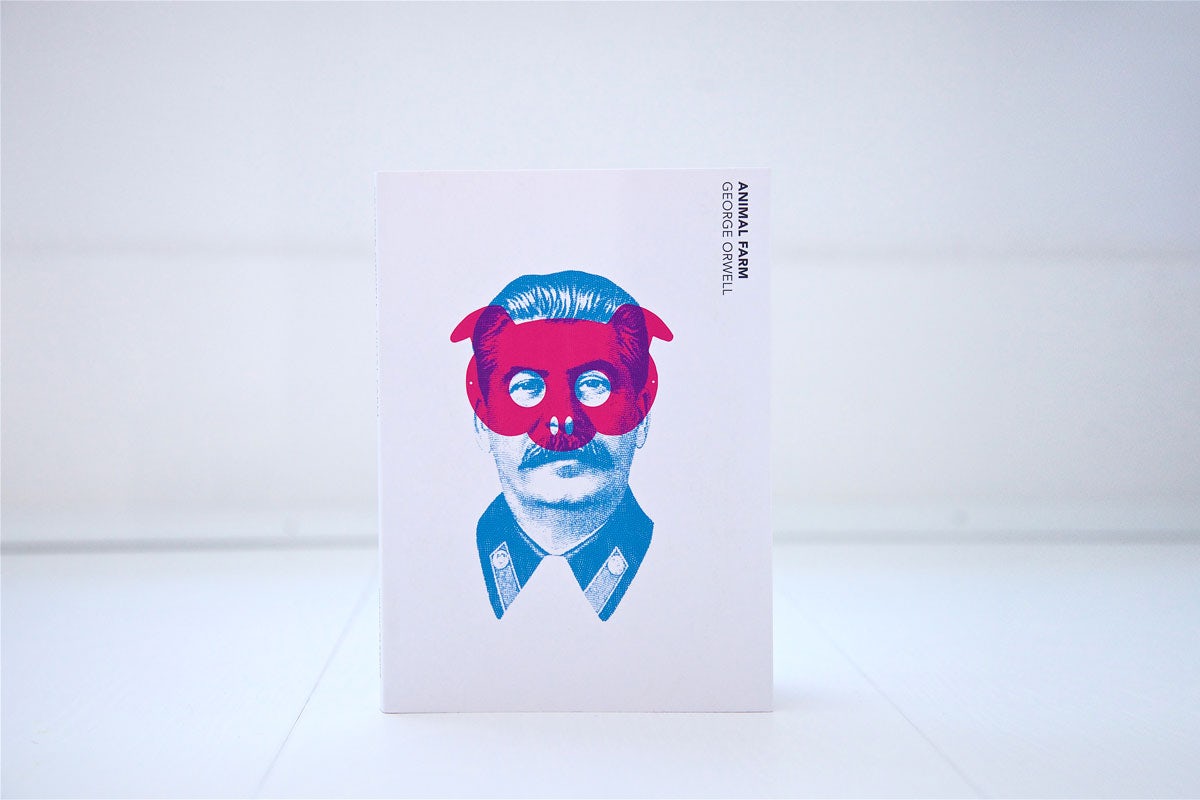 Already one of his favourite books, Kane felt an instant connection to Animal Farm. “I created a piece of work titled Animal Farm at the time of Brexit, where I overlaid David Cameron’s face with a pig’s mask, which I saw as being symbolic for the disruption which soon ensued from the referendum. It took no time to align my work with Suzanne’s concept by putting a pig mask over Stalin, which Orwell himself had pictured,” he says.

The other titles took longer to tie in with the duality theme without making the series feel formulaic. When it came to reimagining Nineteen Eighty-Four, Kane decided to enlist the help of his Instagram followers, asking them what came to mind when they thought about the novel.

“[Most of them] came back saying the all-seeing eye, with some exceptions,” he says. “A number of people came back saying Room 101, which immediately made me think of the rat in the cage. I was surprised to discover no one has ever used the direction of the rat before, as it seems perfectly fitting with the dystopian view Orwell gives of living in 1984.”

For Homage to Catalonia, Kane found a striking photograph of Marina Ginesta, a 17-year-old communist militant from the Spanish Civil War in 1936. “It felt truly iconic of the class struggle and fight between Catalonia nationalists and the Franco army,” he explains. “To finish it I simply overlaid an old Catalonian flag with the words ‘Libertat!’ found from a headline of a newspaper at the time.”

While Kane was less familiar with Down and Out in Paris and London, he listened to the audiobook version while working on the cover art. The final version nods to the overall of theme of duality with a bowler hat and worker cap stacked on top of each other.

The four individual covers are tied together with a fluoro-tinged colour palette, including Kane’s trademark neon pink. Reflecting on creating the series, the artist says: “To say this was a once in a lifetime opportunity would be an understatement.

“Orwell left his mark on me, as he has with so many millions of others. It was a daunting task to be given. Thankfully, my passion took over from my worries. It was also a thrill to know the Orwell Estate ultimately approved my artwork too.”