The project, titled Book Of Life, was created for the Moleskine Foundation and is made from three notebooks that Lupi disassembled and then stitched back together into an accordion-esque book. She then set about adding a single white stitch for every day of her life since birth, adding second stitches in coloured thread to mark out milestones.

A colour code, shown at the start of the book, offers a guide to the significant moments the designer chose to mark. Yellow stands for a life achievement, red for love, pink for world events that had a significant impact on Lupi, and blue for big trips. Black and red crosses mark out losses and breakups, respectively. 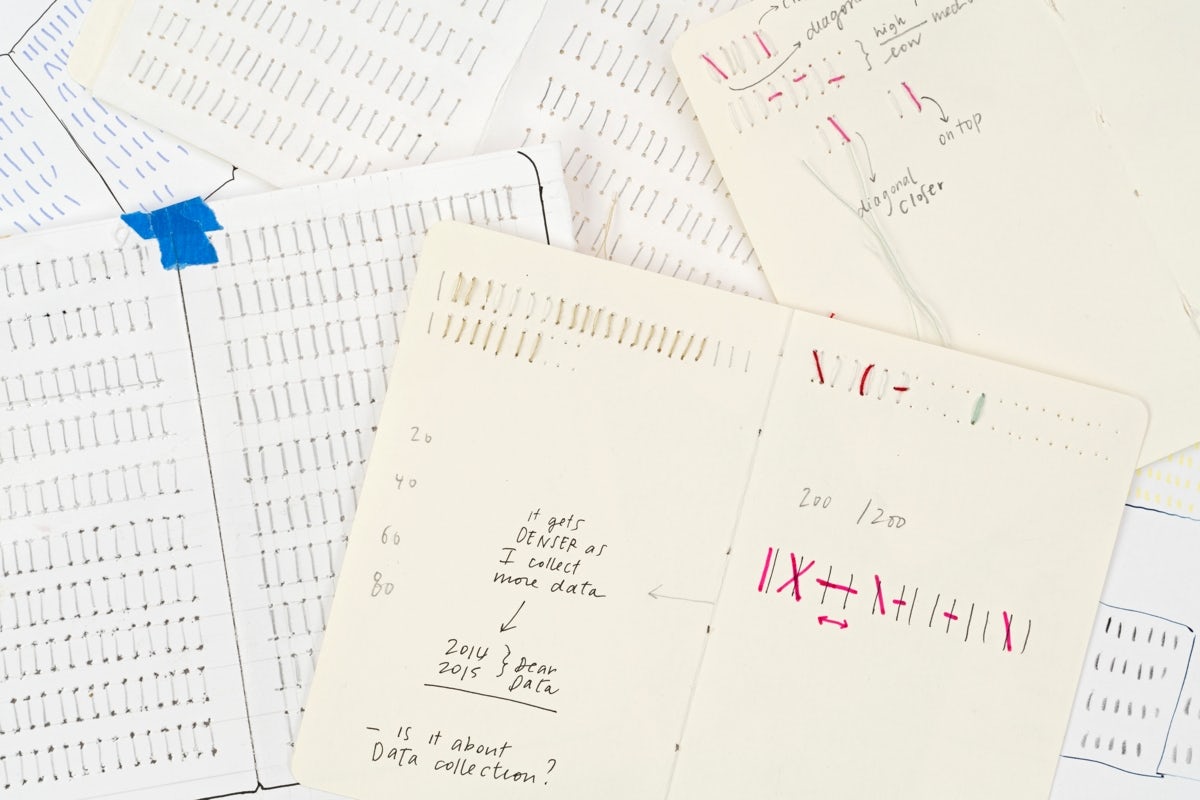 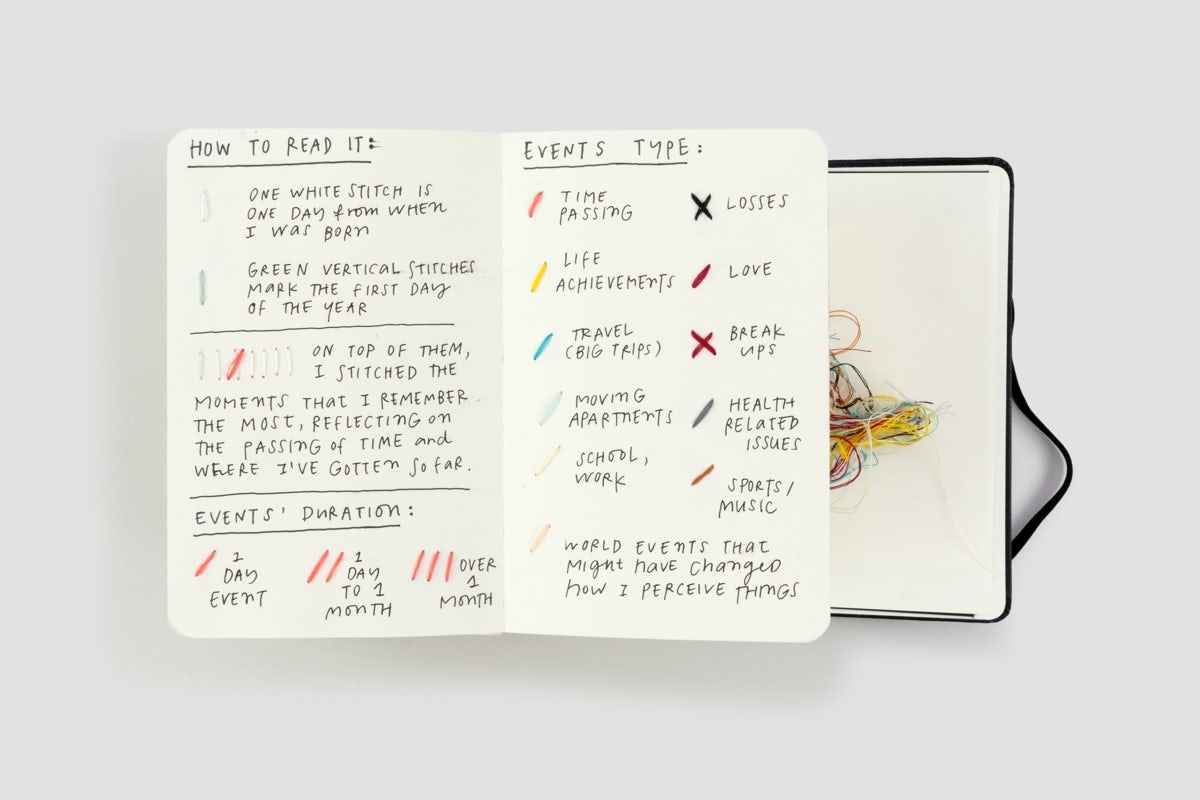 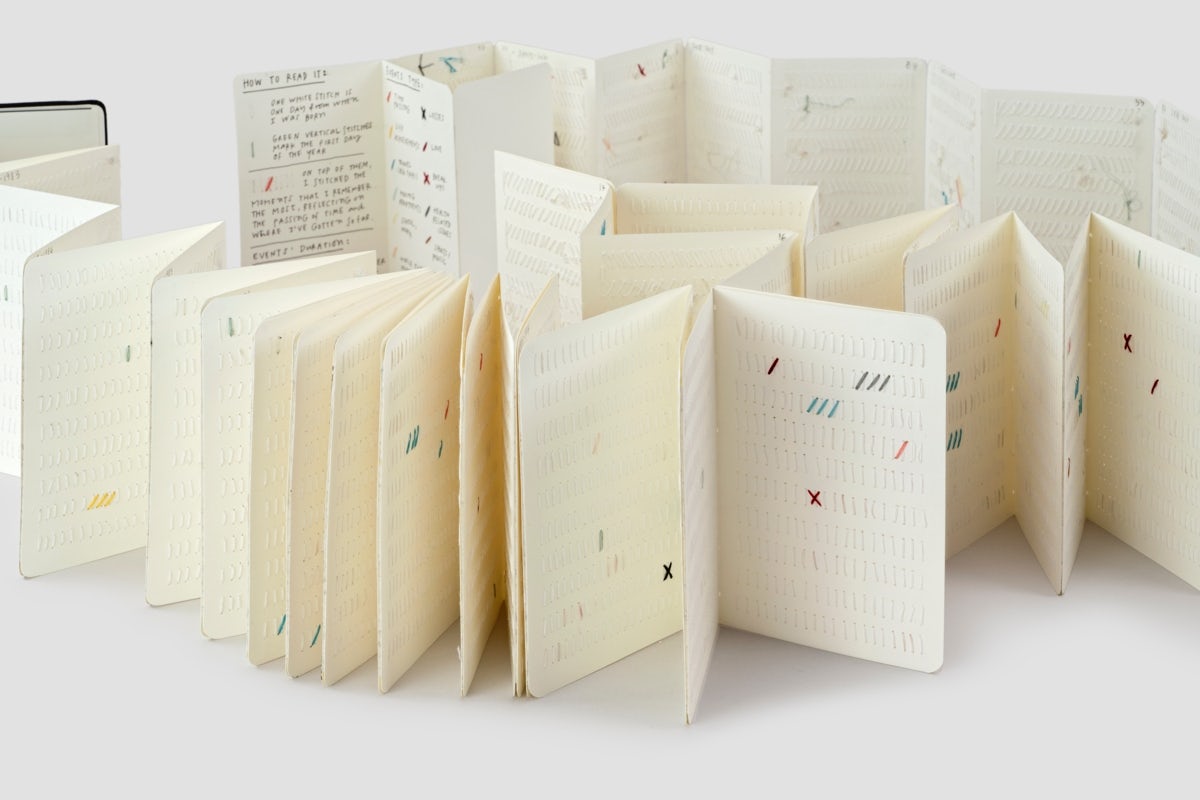 “The theme Moleskine suggested was ‘what comes first?’,” says Lupi of the project, which will become part of the Moleskine Foundation Collection, alongside notebooks by thousands of other artists and designers.

“At the time I was about to turn 40 and I decided to use the notebooks to reflect on my life so far … I wanted to capture the totality of my life in paper and thread – both key events that I felt were pivotal to the trajectory of my life, and the mundane of the day-to-day.”

Lupi describes the process as “a laborious reflective exercise”, saying that looking back at the passing of time, and physically marking each day, was a way for her to question who she is and what’s contributed to that along the way. 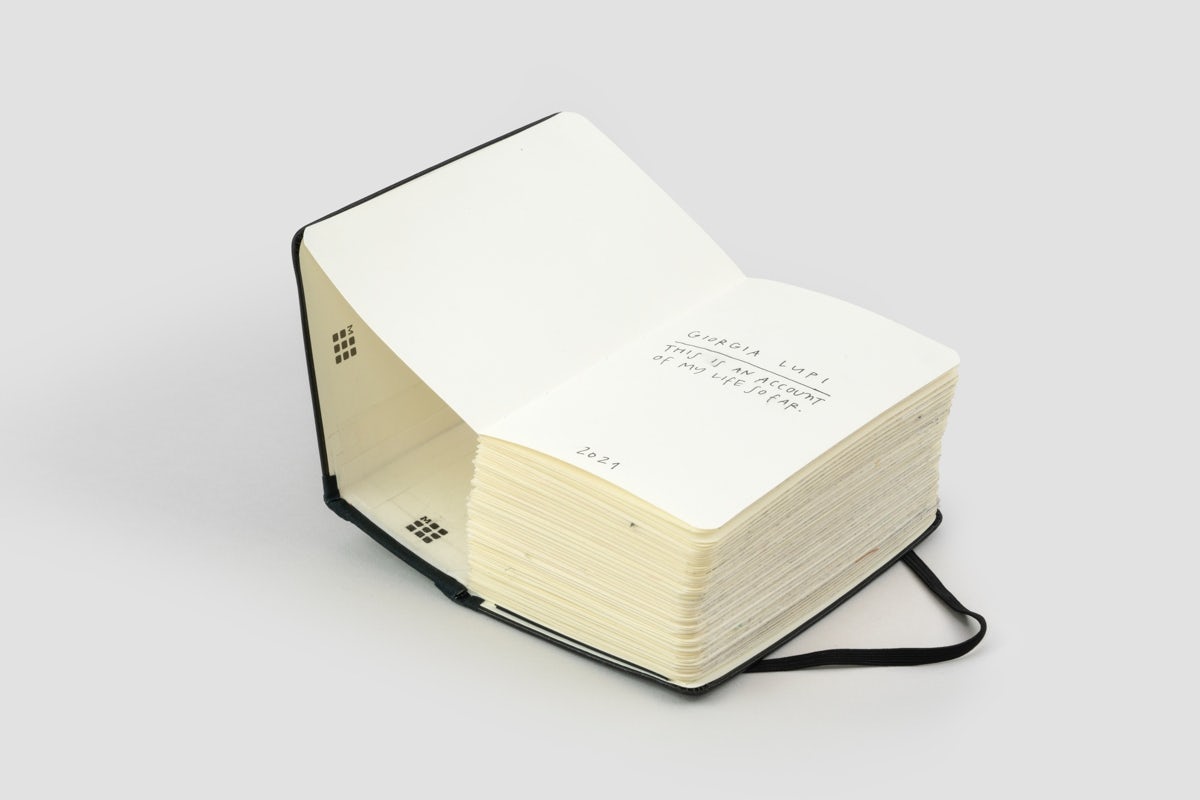 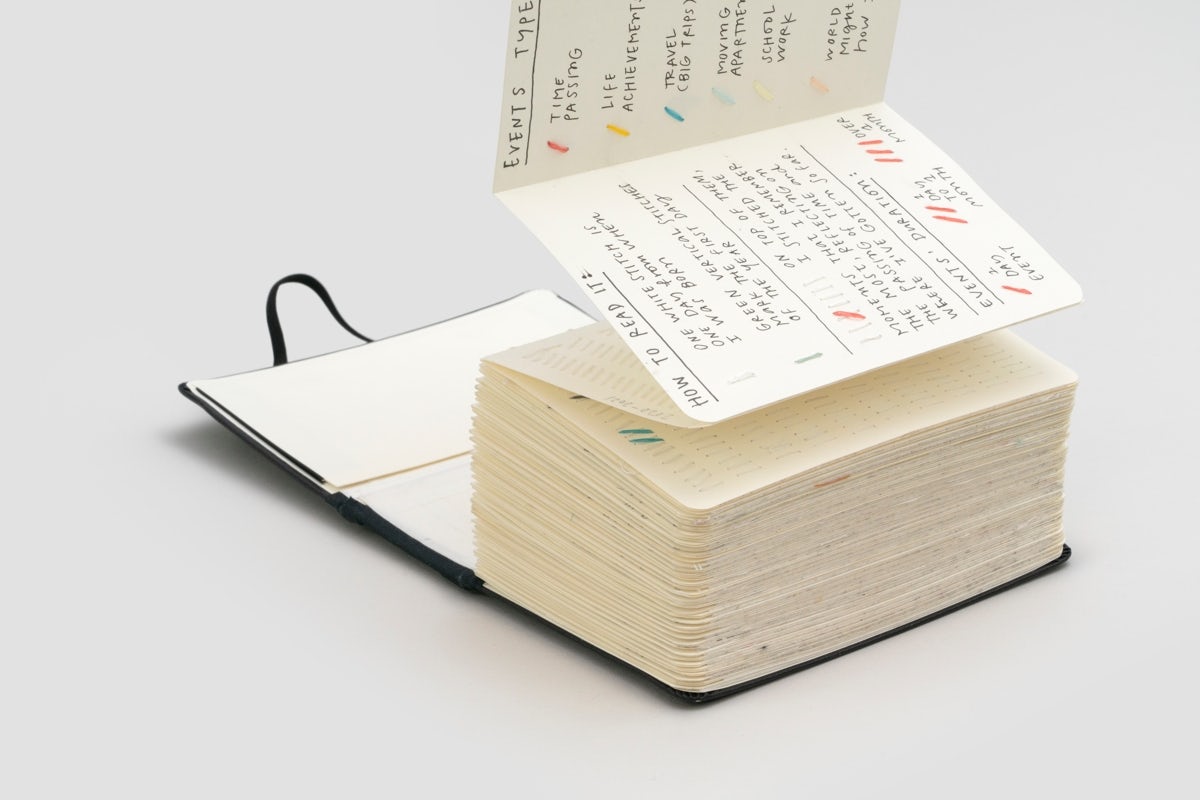 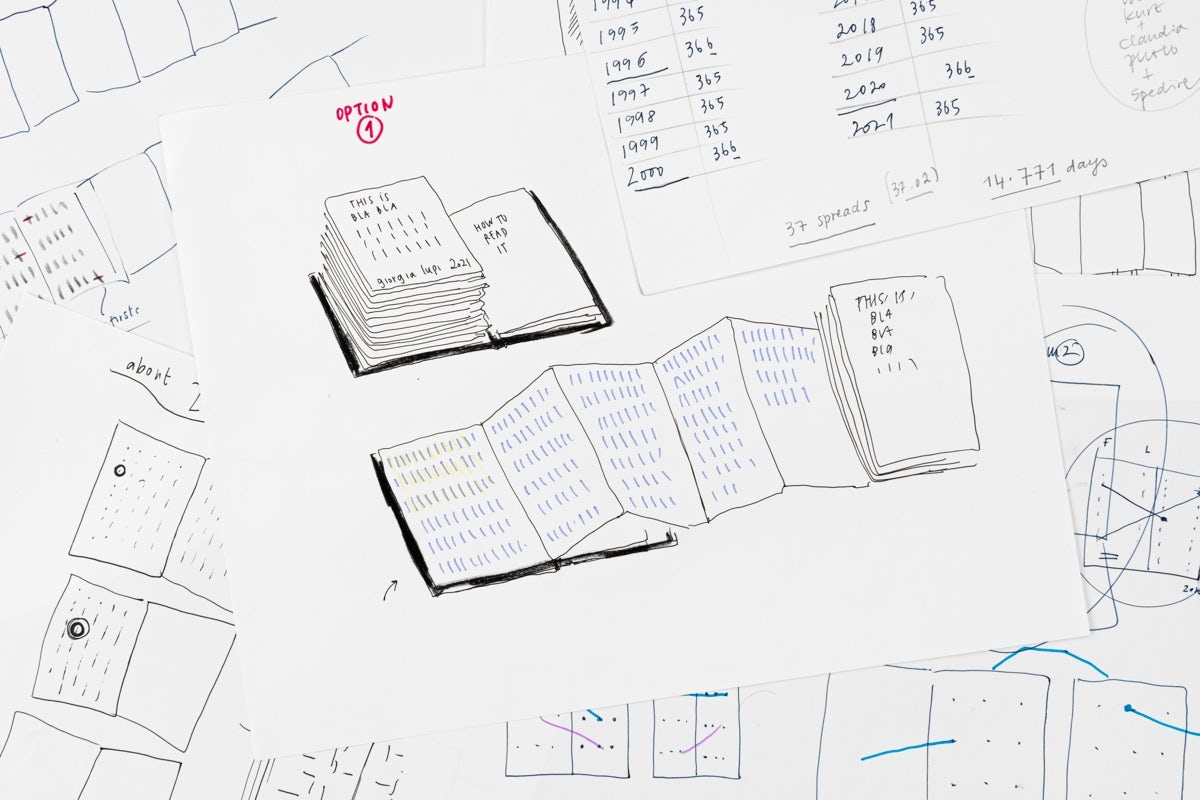 “I am a data observer, a data collector, and a believer that counting something means it matters,” she adds. “To expend time and effort with your past is a particularly potent form of self-awareness. It’s an exercise to document existence, a record of time, the happenings and places that make our lives what they are. I see it as a conversational device, the beginning of a conversation, as I see all forms of data.”

It’s not the first time Lupi has experimented with analogue ways of presenting data, having previously created Dear Data – a year-long experiment that saw her exchange postcards of hand-drawn graphics and statistics with fellow designer Stefanie Posavec. 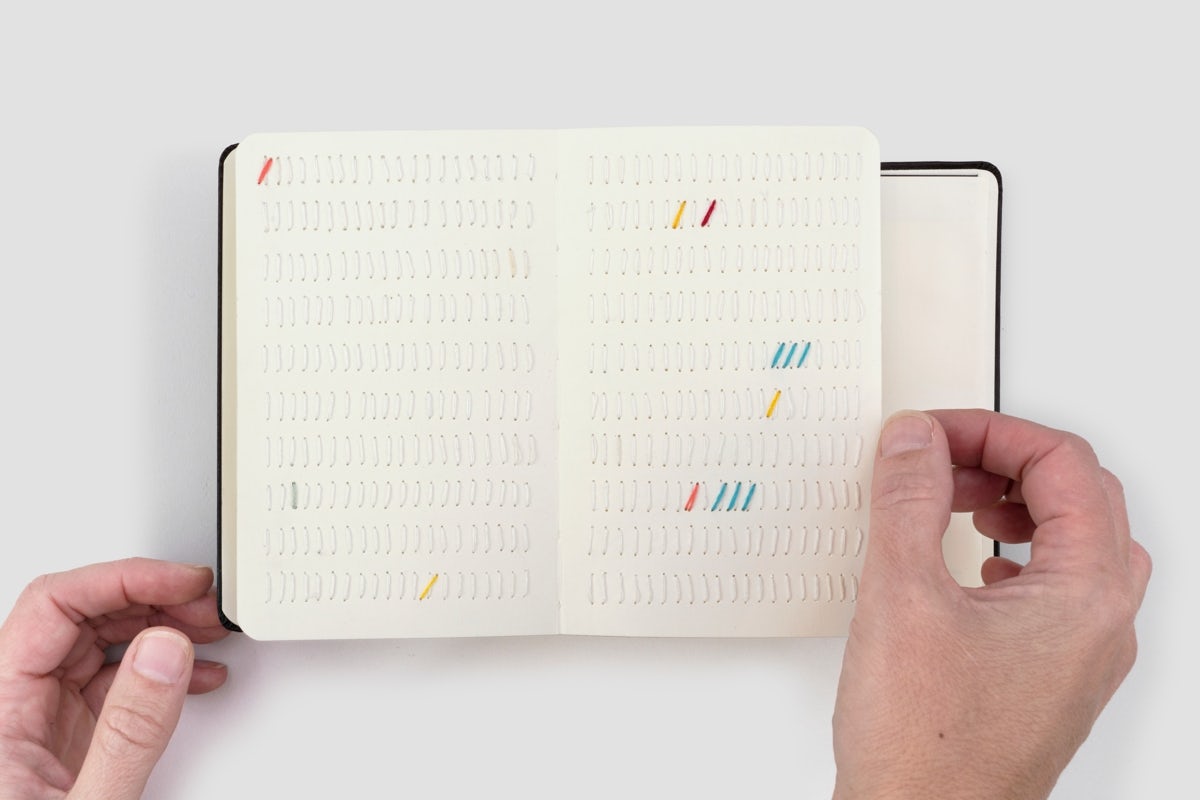 In an interview with CR, Lupi discussed data’s narrative potential, expressing a belief that it can “reveal hidden patterns of our own human nature and society that we can then understand better”.