“It’s a big step from graphic design to architecture, but it’s only a step,” says Thomas Widdershoven, co-founder of Dutch studio Thonik, which has just moved into a self-designed studio on Amsterdam’s Wibautstraat. “You can imagine that with all the experience we have in graphic design it wasn’t such a huge step to design a building, but we do it a bit different to architects.”

The building in question – which is wrapped entirely in black-and-white stripes – was 12 years in the making, and posed several design and legislative challenges along the way. According to Widdershoven, it’s rare that design studios in Amsterdam own their studio buildings, which meant it was hard for them to find a suitable space to buy. Instead, they managed to get their hands on an awkward plot of land owned by the city government, which had been rejected by the usual property developers that would build on it.

First of all, Widdershoven says the studio had to convince the authorities to let them build an extra metre outwards onto the pavement, to claim some extra space for the building. Luckily, because the road’s located on a former railway track, many of the other nearby buildings aren’t entirely lined up either, so they had a persuasive argument. 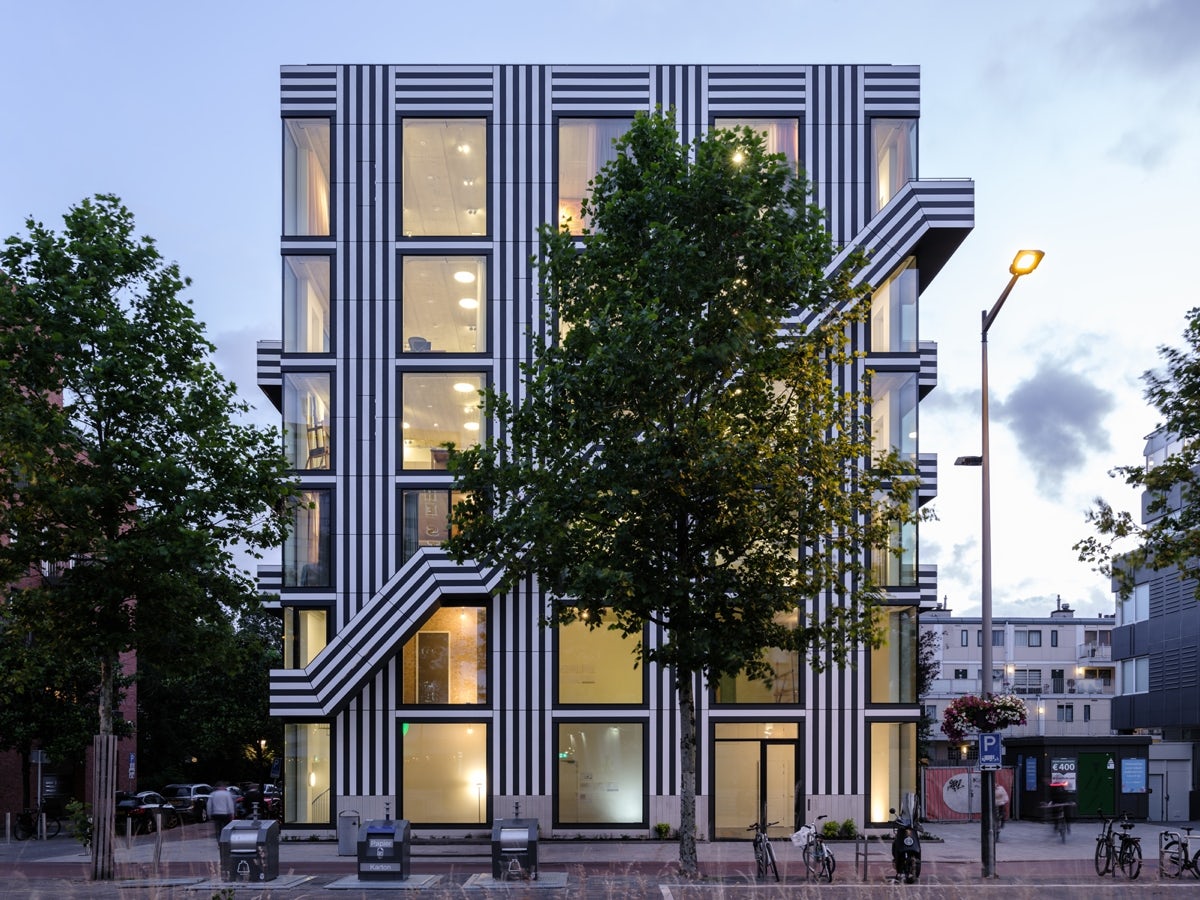 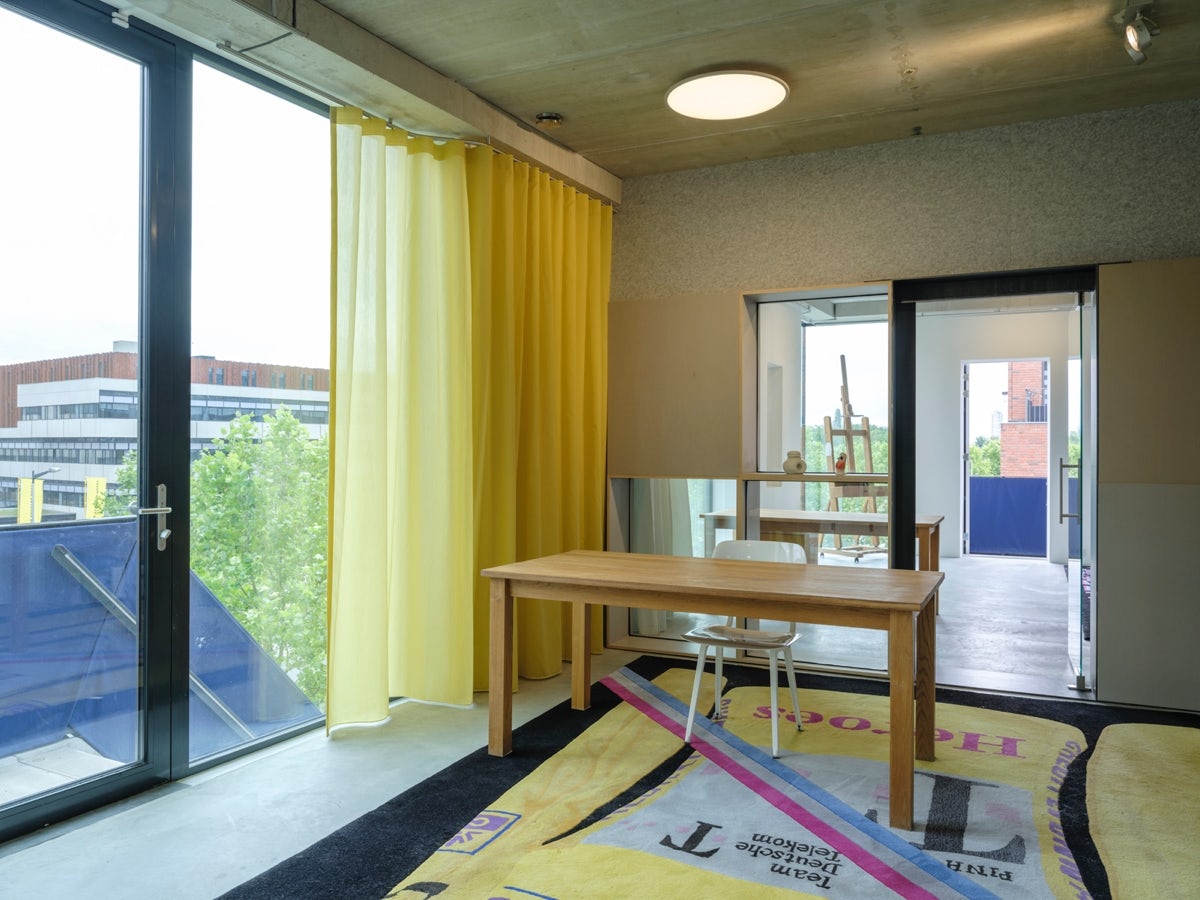 Then they started the design process, working closely with MMX Architects so they had an experienced partner to share ideas with, and make sure their design was possible.

Being graphic designers, Widdershoven and Gonnissen based the entire building on a grid, dispensing entirely with the idea of internal columns, which would disrupt the rhythm of the glass and walls. They moved the fire staircase to the outside of the building to add space inside, creating a diagonal line that contributes “the exact right breakage of that rhythm that is so strict”. Floor-to-ceiling corner windows were another essential part of the design. “You could really look along this huge street, but also to the right and the left,” explains Widdershoven. “It projects the whole street into the space.”

The pair also had existing architecture as a reference for their own design. Gonnissen says they thought a lot about buildings they’d seen while on trips to Tokyo, where unusually shaped office blocks are often tucked into tiny spaces. “We had this really small plot and we wanted to make something special out of it,” she says. “We wanted to come up with something which could really stand out somehow as an icon, but also merge into the environment. We wanted to reach both ways, and those small Japanese buildings really inspired us. We were hoping to build something like that from our own creative view.”

And while this was a first and foremost an architectural project, Thonik’s distinctive approach to graphic design is evident in the building – particularly its striped façade and pattern-covered stairwells.

“We had experience with supergraphics in the past, so that was a way to go from 2D to 3D,” says Gonnissen of the mental switch from graphic design to architecture. “We’ve just moved in time, so from print to motion design, and from supergraphics to architecture. It’s sort of the same steps.” And she has a point. Thonik has indeed worked on large scale projects in the past, including creating enormous graphics for the 2008 Venice Architecture Biennale, as well as a floor painting for the Museum Boijmans van Beuningen. “We knew what stripes could do at huge scale,” says Widdershoven. “To put on the stripes is something that architects would never think of. It’s such a typical graphic design tool to bring liveliness and balance to diverse elements.” 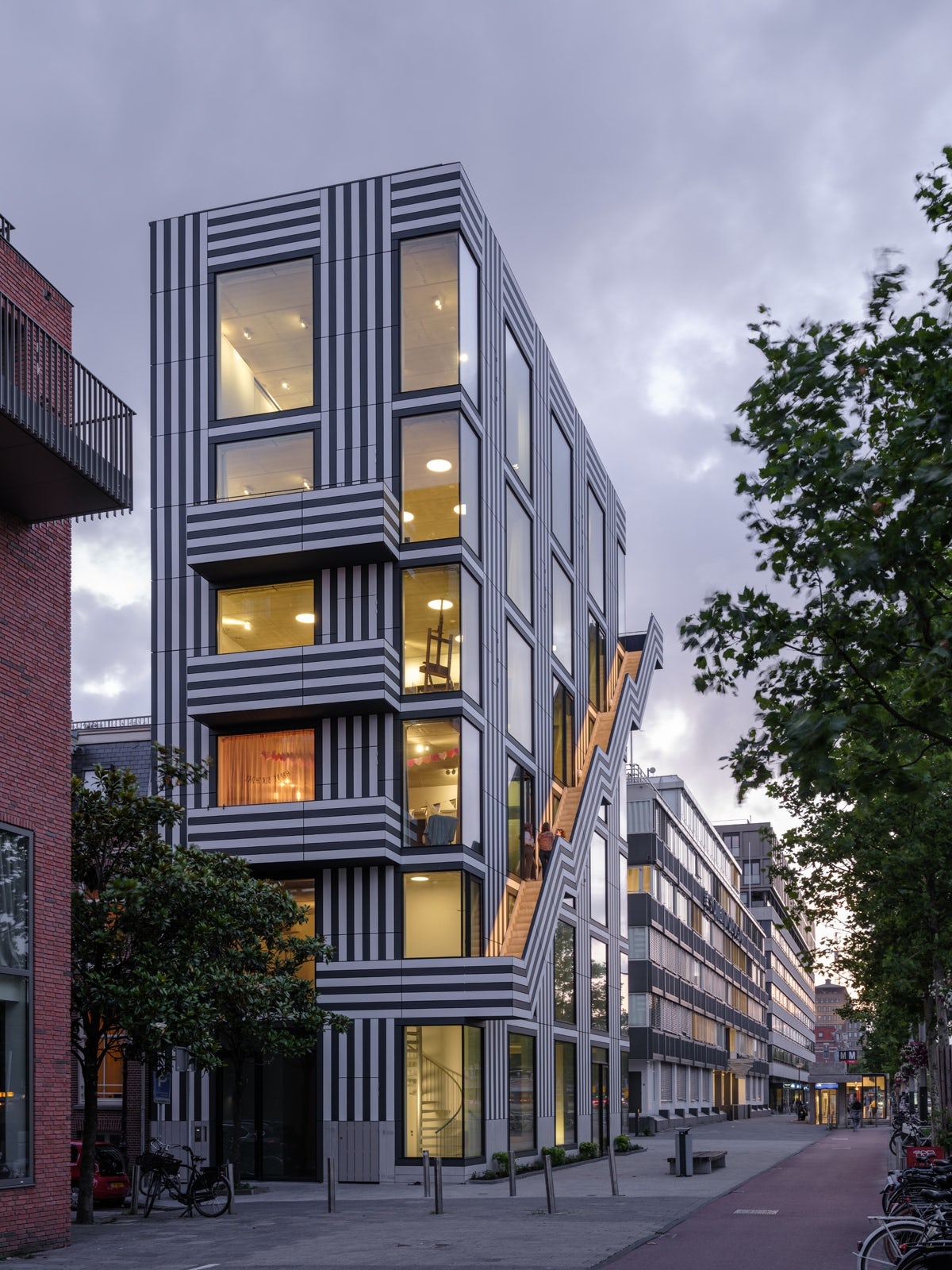 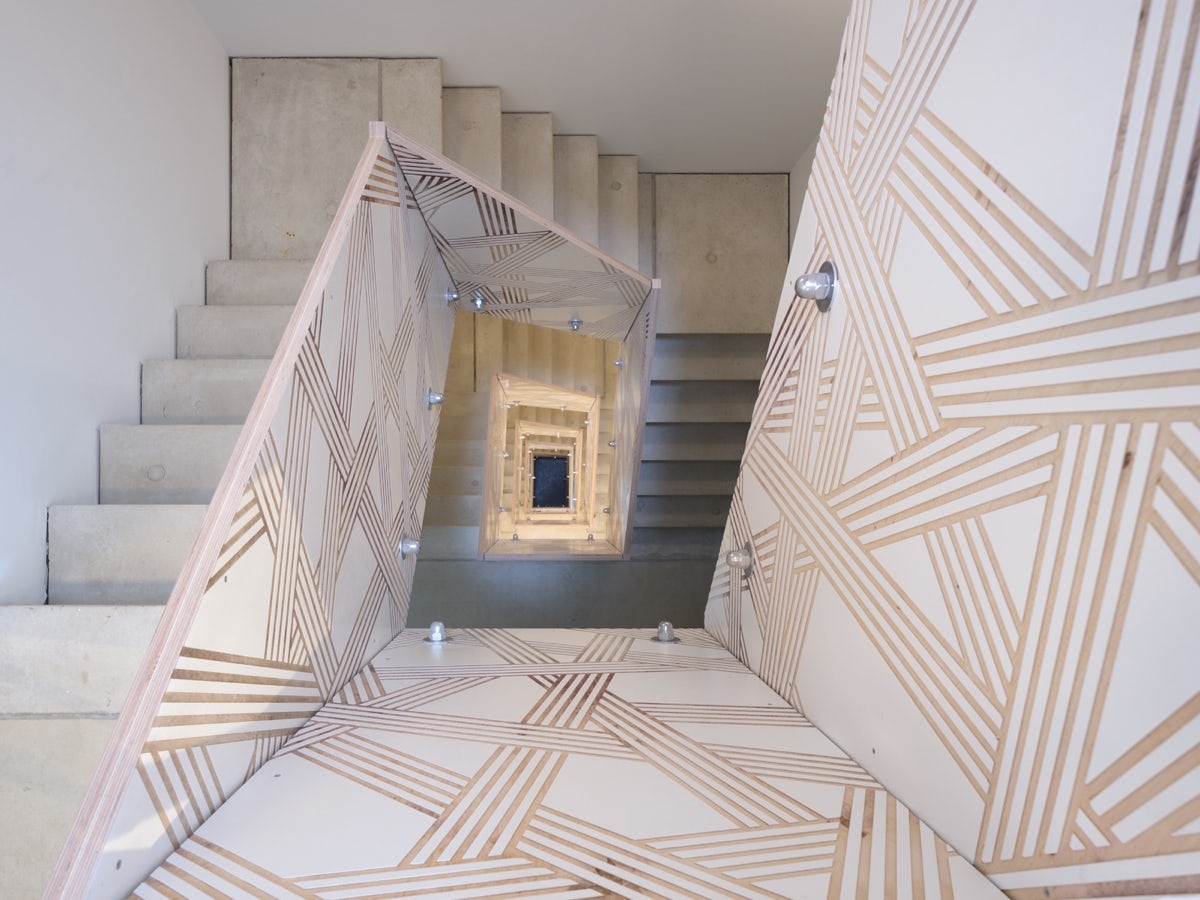 More than just the building’s appearance, Thonik were determined to create “totally flexible” space. They’ve ensured there are a minimum of supportive walls in the building, which means areas can be rearranged for residential, retail, restaurant, or events space.

Non-supportive walls are made from bookcases which can be easily moved, and the interiors themselves are minimal – although Thonik has added some of its self-designed graphic patterned carpets, as well as other pieces created in collaboration with product designers. Already the building’s been praised by the press for its striking appearance – made all the more graphic for appearing next to more traditional red-brick buildings.

Clearly, graphic designers are not architects, but the project does demonstrate what’s possible when they get the opportunity to input into building design. They might not have the same skills as trained architects, but as Widdershoven points out, graphic designers are well accustomed to changing media – with many of them living through the shift from print to online, and from posters to screens.

“I think graphic designers are quite flexible in that way, and quite adventurous in not strictly graphic design fields,” he told CR. “So far the majority of architects have reacted favourably to this building, but I know if architects start doing typography I sometimes get a bit worried. If architects have thoughts about this building, or graphic designers building in general, I completely understand. On the other hand if you have a quite open process, the way we had, and work together with architects, and interior designers and product designers, there is a collaborative team feel and I think you have a better chance of reaching architectural standards for the building.” 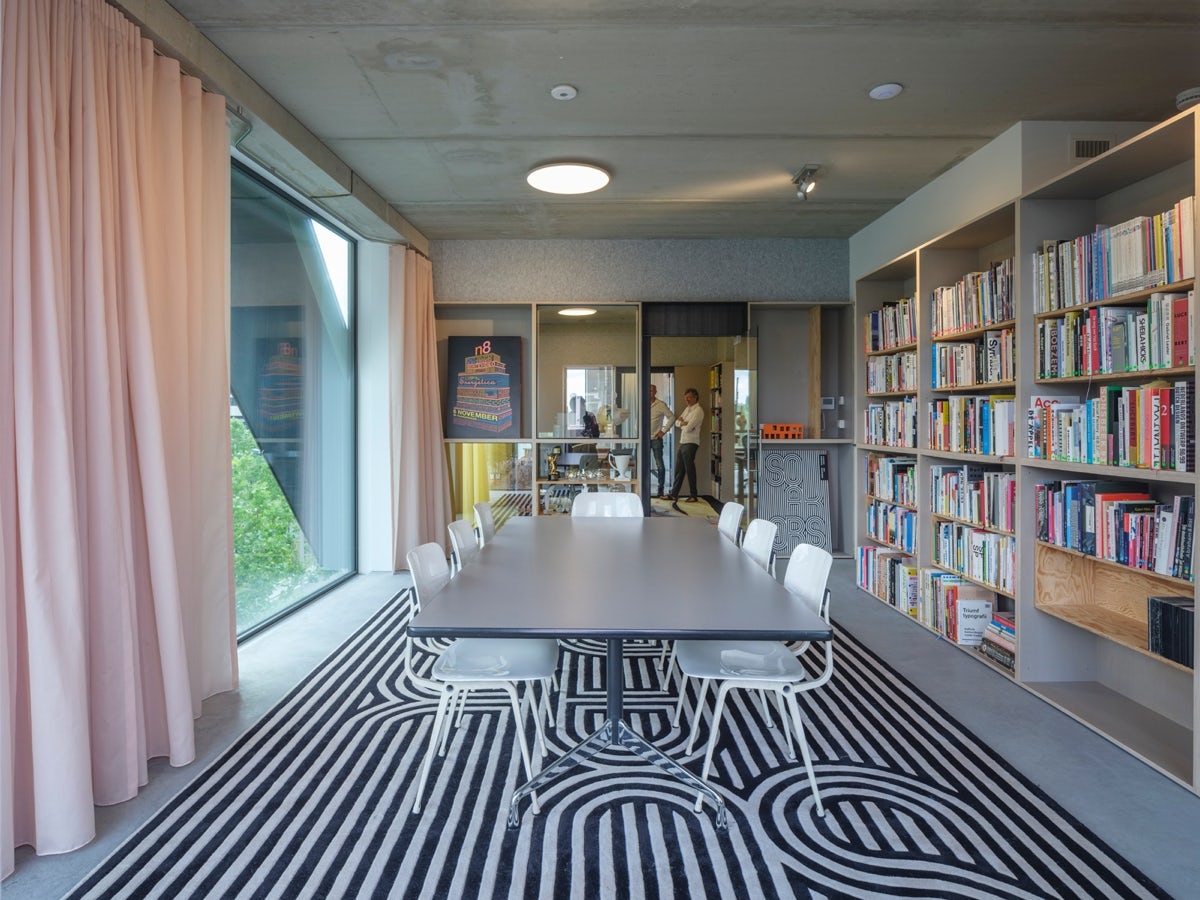 “Everybody now is collaborative, it’s very different from when we started 25 years ago when you were supposed to be a graphic designer in an attic, doing something magical to type, and layout and paper weights,” he adds. “The creative industry as a sector has moved on, and I think many people now are in new fields. If you’re collaborating, you can move forward fast.”

For Gonnissen, it’s part of a bigger conversation that needs to happen. She believes that designers of all kinds need to be brought into conversations about social issues, and other bigger challenges, much earlier on. Just as Thonik brought a slightly different perspective to the creation of a building so, she says, designers, architects and other creatives are able to think in “ways of change”, and suggest alternatives.

“They question systems and the world around them,” she says. “I think that it’s really good, post-pandemic, that we all collaborate, it’s the only way forward. It’s necessary that we all live together in a certain way and start to talk and think about that. That’s exactly what we want to achieve with the building. On the fifth floor there’s what we call an events space, but it’s more of an open space, where we want neighbours and designers as well as lots of people in many fields to talk about the world we’re living in and how we can change that and make the next step.”