Kerry Purcell attended his first wrestling bout when he was around 10 years old. It was 1980, and his dad took him to the pier at Cleethorpes to watch Big Daddy and Giant Haystacks compete in the ring. Purcell wasn’t an avid fan of the sport but he often watched the wrestling segments on ITV’s Saturday primetime show World of Sport and was intrigued by the idea of seeing TV wrestlers in the flesh. He went along and remembers being fascinated by the spectacle of the sport.

“My dad couldn’t afford to get a paid seat so we stood at the back and I remember the crowd started really shouting,” he tells CR. “Giant Haystacks came out and an old woman hit him with her bag while he was walking up the aisle…. I was amazed that this was going on and that people could do that. The next minute out came Big Daddy. When I look back now I can see they were incredibly unfit but the spectacle of it and seeing someone that you’ve seen on TV suddenly in the flesh … I think I was just sort of overwhelmed by it.”

Purcell and his dad started going more regularly. At the time wrestlers such as Big Daddy and Giant Haystacks were household names and would compete in ballrooms and halls up and down the country night after night. Wrestling was seen as a predominantly working class sport but the audience at bouts ranged from small children to elderly women. 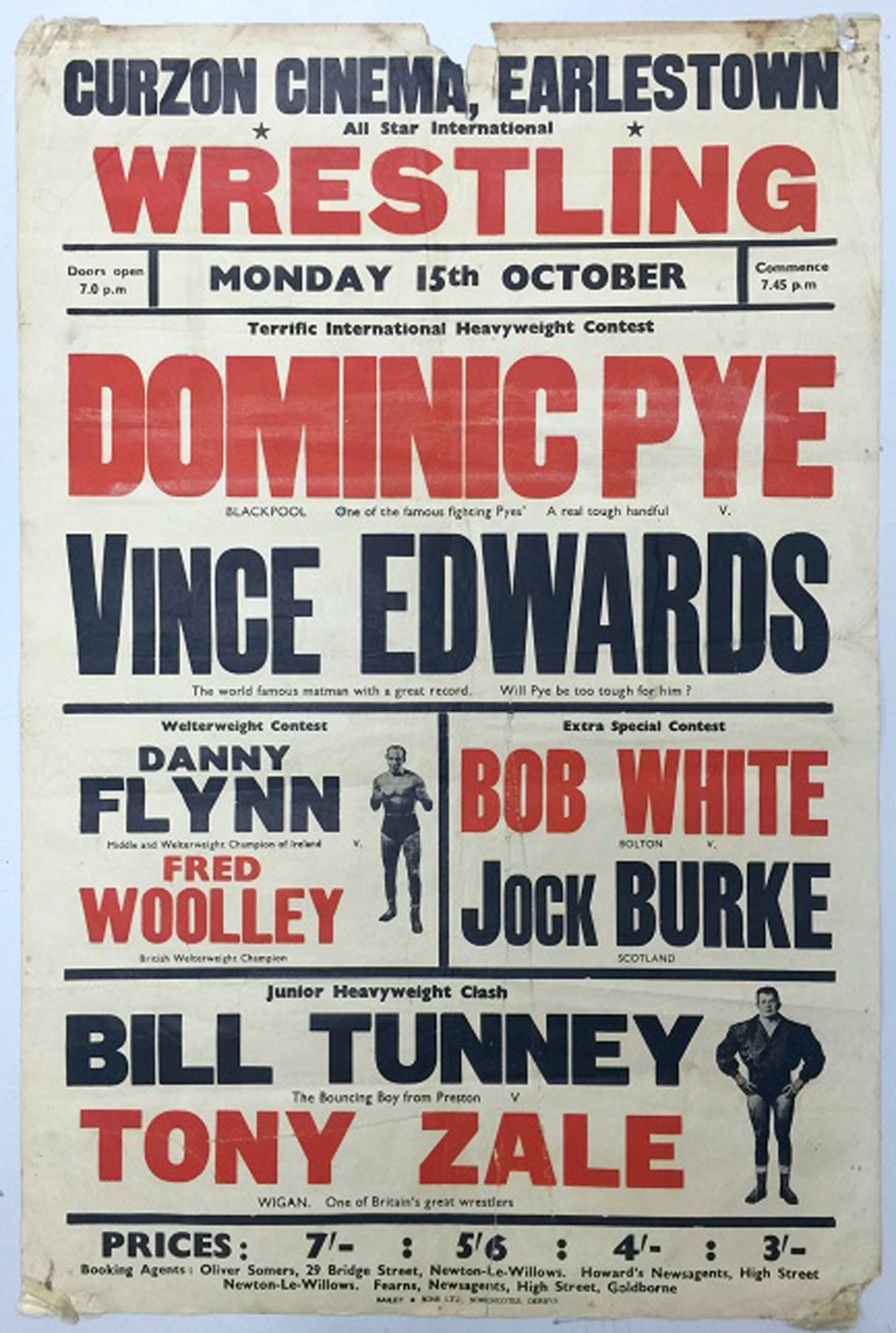 The sport played out like a pantomime. ‘Goodies’ were known as ‘Blue Eyes’ and ‘baddies’ as ‘Heels’ and each wrestler had invented their own persona and backstory. The costumes were elaborate but often homemade – one wrestler Adrian Street raised eyebrows in working men’s clubs with his glam rock-inspired sequin capes and lashings of glitter while Big Daddy preferred leotards with his name crudely sewn on the front. Wrestlers would interact with the crowd and provoke them to react with boos or cheers.

“I wasn’t thinking in these terms at the time but when I look back there was something almost like a silent movie about some of the wrestlers’ performances,” says Purcell. “They were really comedic – they’d be falling over each other … and there was a real playing up to the crowd which I think comes from the history of wrestling in the world of circuses and music halls. It was always part sport, part pantomime,” he adds.

Purcell stopped going to wrestling bouts as a teenager and had largely forgotten about the sport until he came across some letterpress posters for sale on eBay. He teaches Design History at the University of Hertfordshire and has published books on graphic design and influential designers so is often on the look out for printed ephemera. 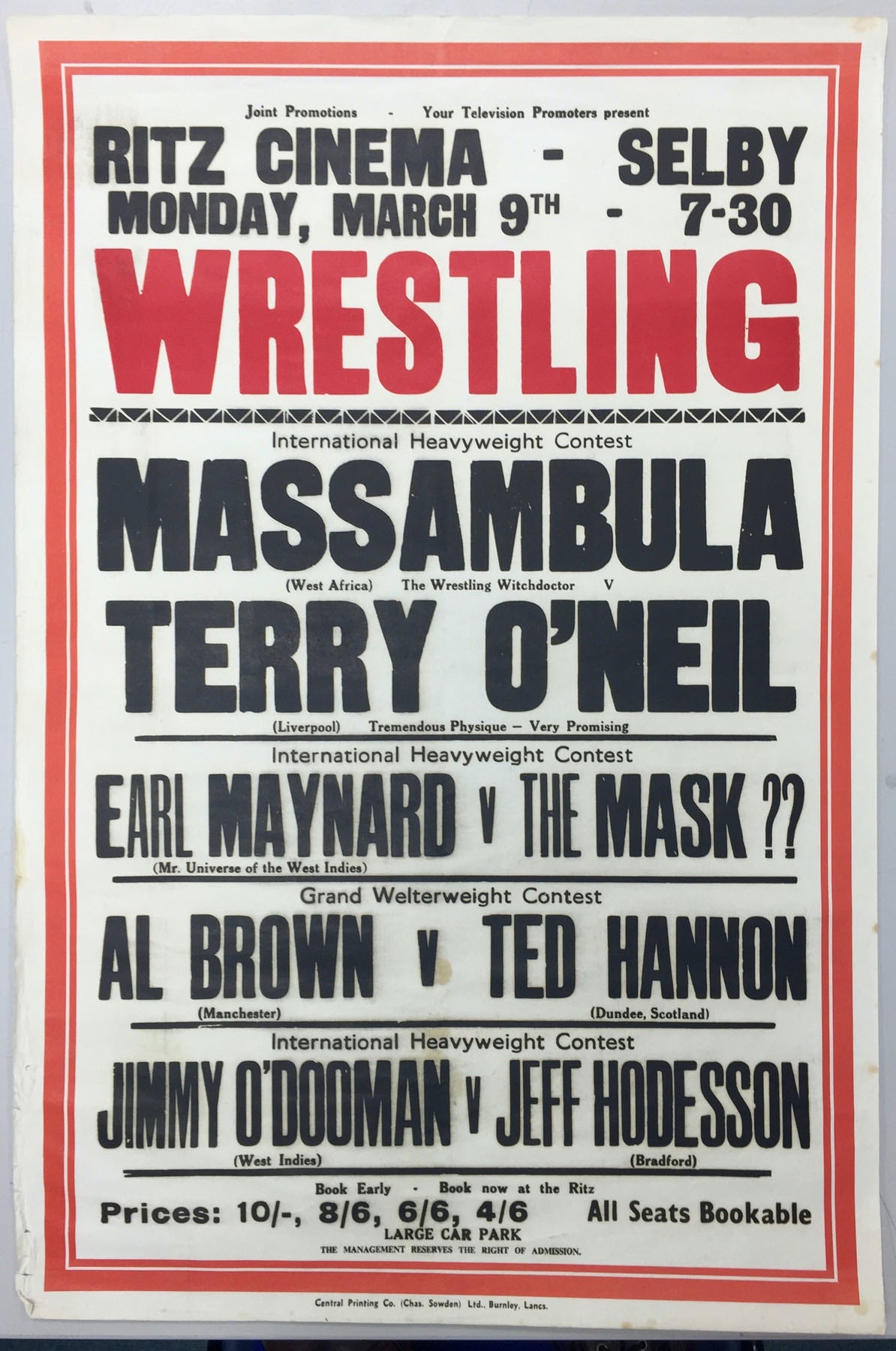 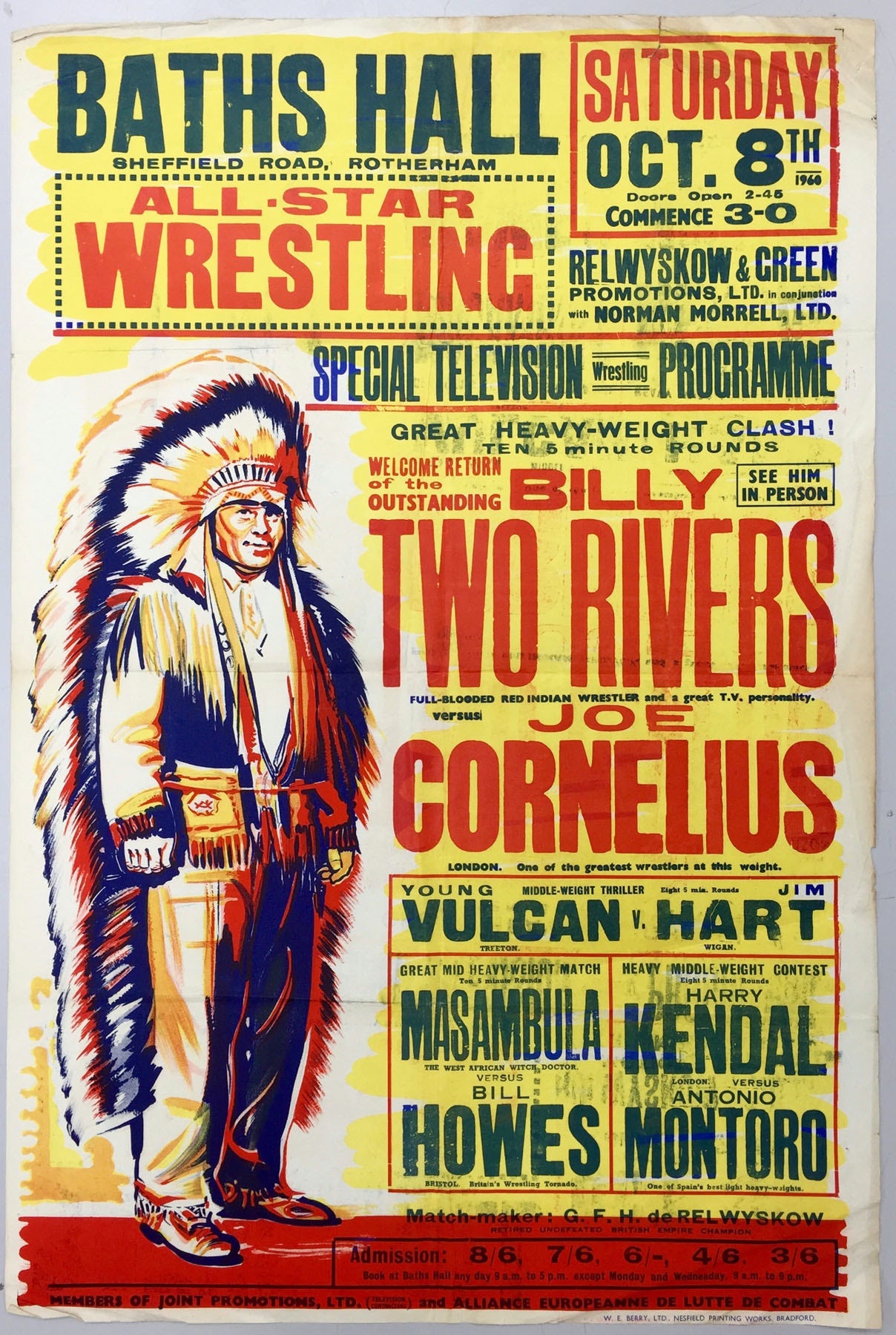 “I came across this wrestling poster and it was so cheap so I bought it and when it arrived I thought ‘wow, it’s beautiful’,” he says. “Often these posters would have been pasted up on walls and thrown away afterwards but this one had somehow survived and there was something about the minimal use of colours and photography that was really beautiful. So I started collecting more of them.”

His discovery sparked a fascination with the visual culture of the sport. He has since collected hundreds of posters plus rare magazines, photographic portraits of wrestlers and costumes worn by Big Daddy and Street.

In 2016 Purcell put on an exhibition in Tunbridge Wells showcasing his collection (more info about the show here). The show travelled to Doncaster last year and will soon be visiting the Attenborough Arts Centre in Leicester. He is now hoping to publish a book on the visual culture of wrestling and has set up a crowdfunding page to raise the funds needed to make it. 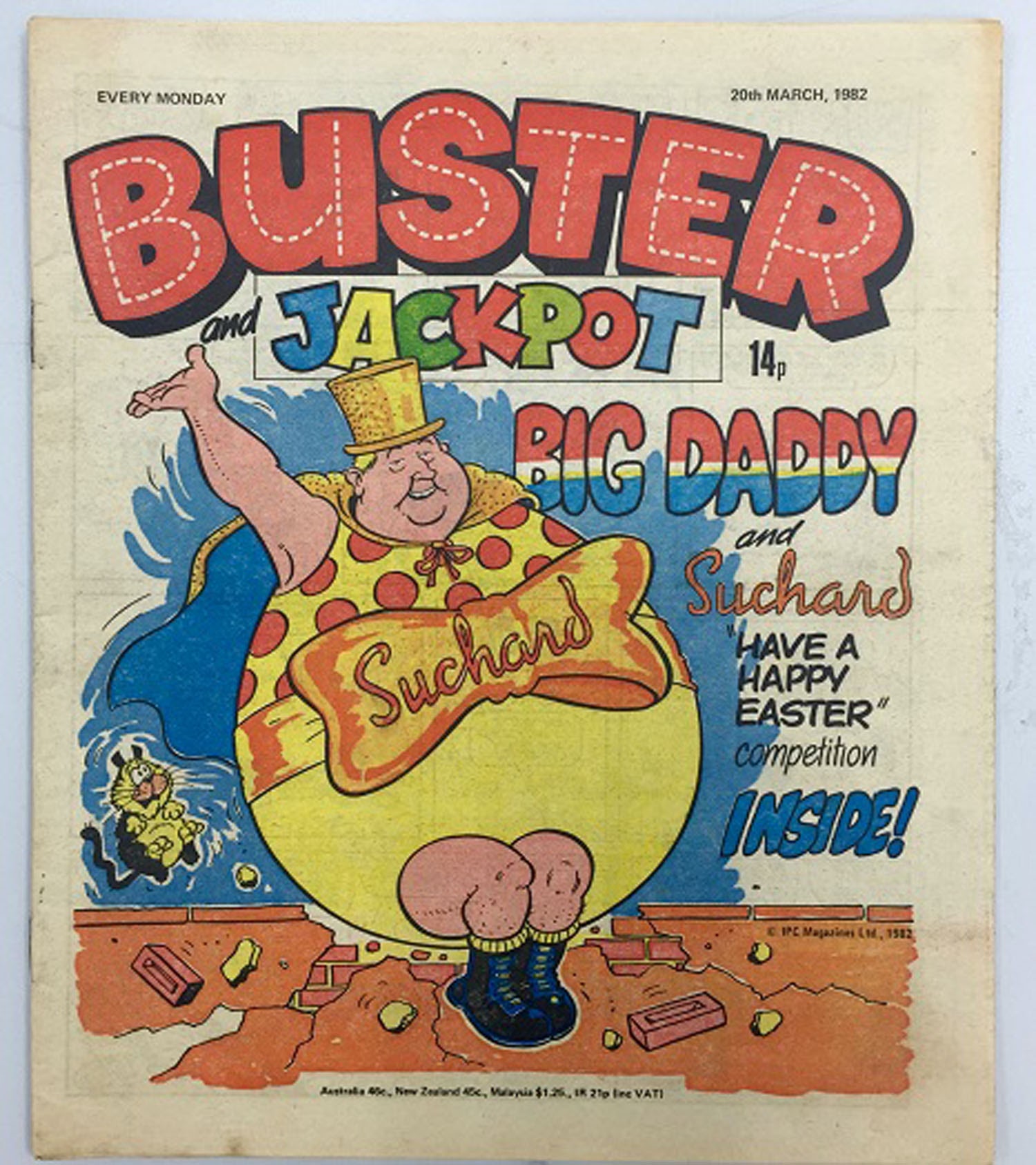 Alongside posters, which are reminiscent of circus and music hall play bills with multiple typefaces in contrasting colours, Purcell has collected official portraits of wrestlers.

“When wrestlers started their careers they would have a portrait taken of them – [they were] a bit like a Richard Avedon photograph with the wrestler shot against a white background. The photography was very stripped down and very minimal, which enabled the printer to easily transfer photographs on to posters [this was, after all, an era before Photoshop],” he explains.

“Even though the photographs were quite functional, there was something really striking about them. The wrestlers really had to foreground their characters, so there was a lot of performance to the camera.” Purcell likens this collection of images to a typology or “visual dictionary” of wrestlers and the types of characters they tended to play. 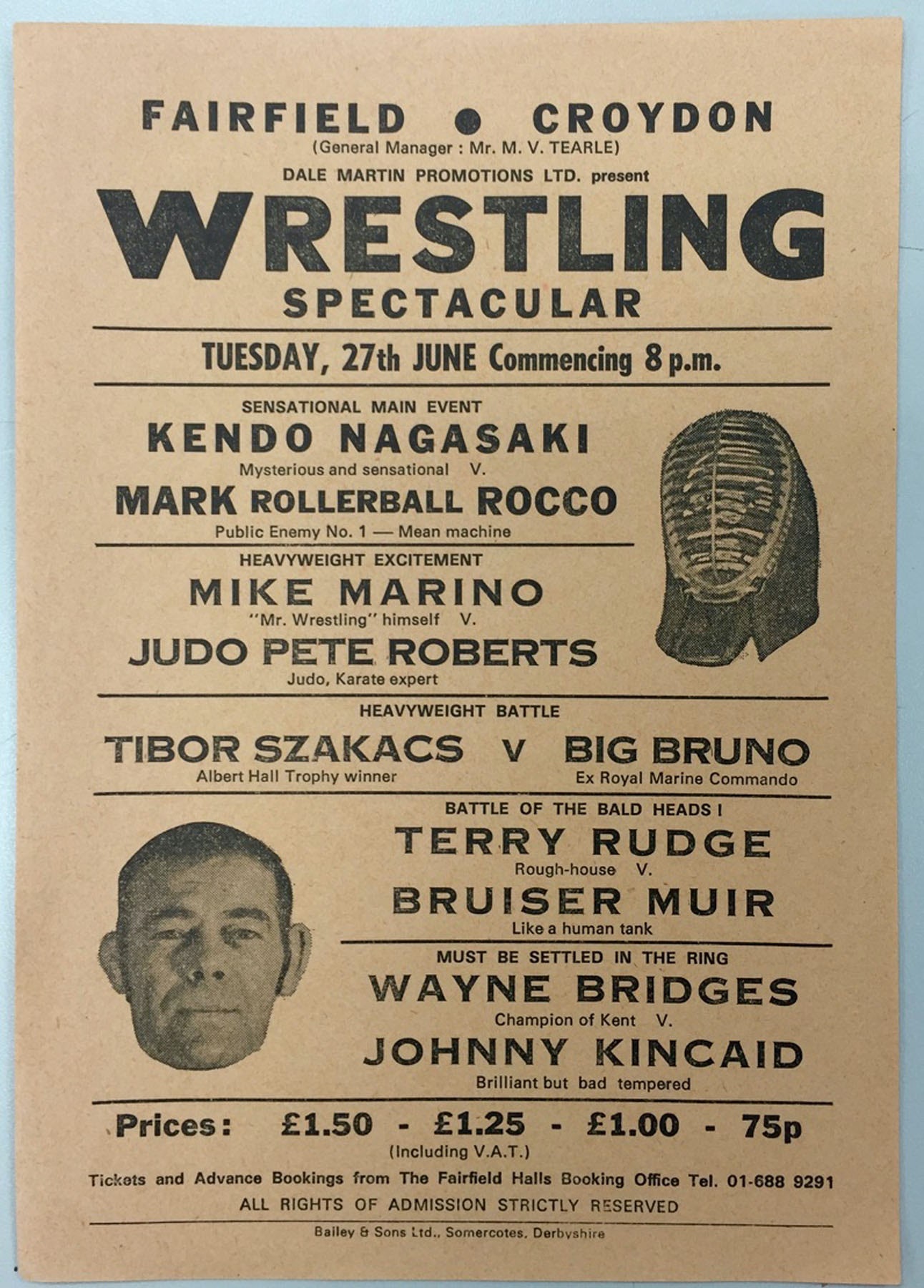 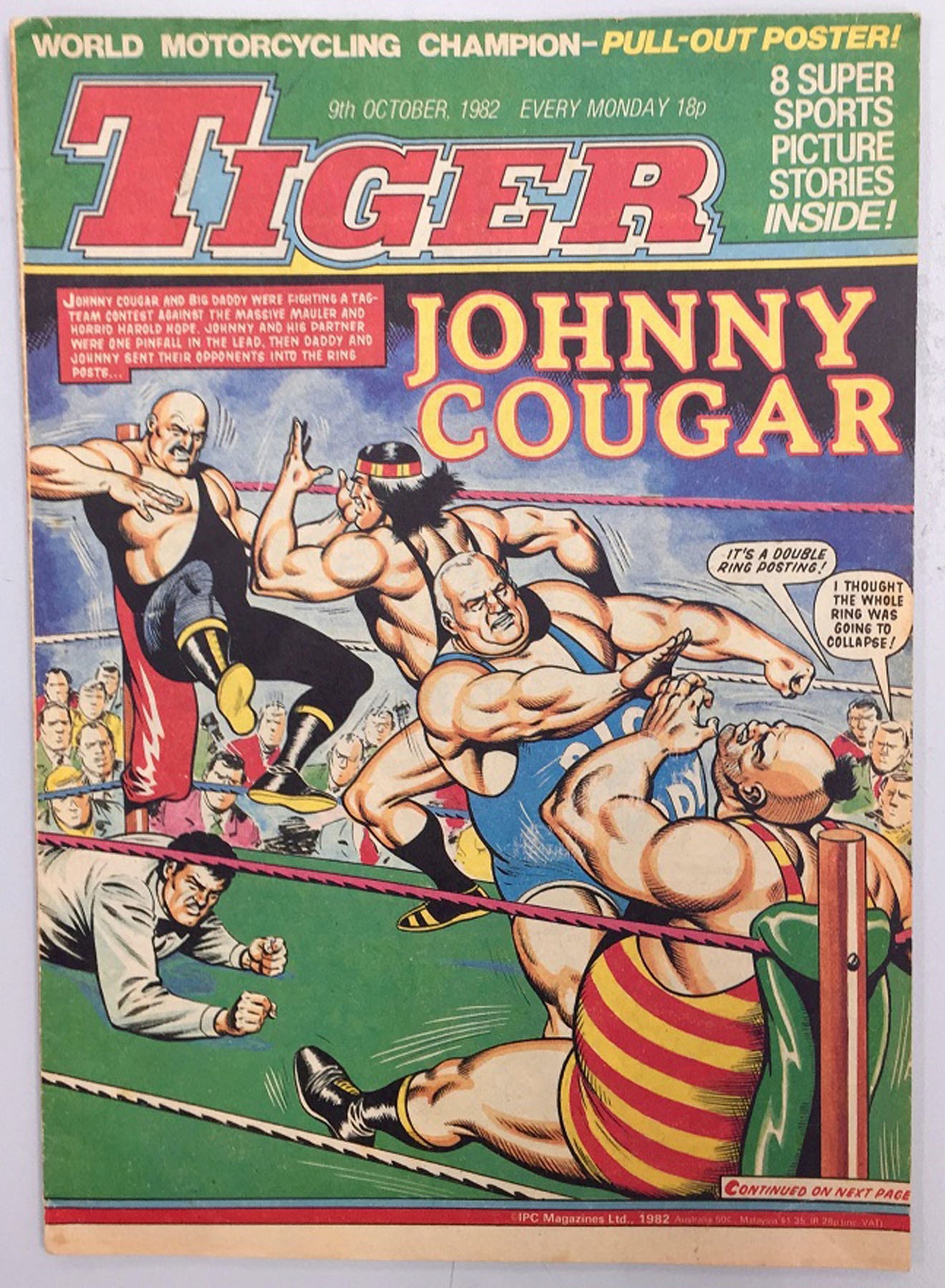 He has also collected some issues of The Wrestler – a wrestling magazine with a surprisingly minimal cover and Helvetica masthead – and a handful of costumes including a transparent fur-lined cape loaned to him by Street.

Through the exhibition – and the book if it meets its funding target – Purcell hopes to document an area of design history that has been largely overlooked. To Purcell’s knowledge there are no existing books documenting the visual culture of wrestling (though artist Jeremy Deller made a film about Street, which you can watch in full here).

Purcell is still collecting material and is hoping to find more photographs and ephemera documenting women wrestlers. The portrayal of women is problematic – female wrestlers were often objectified and sexualised. Some would find ways to use this in their routine and provoke anger or excitement in the crowd – Purcell likens it to the representation of women wrestlers in Netflix series G.L.O.W. 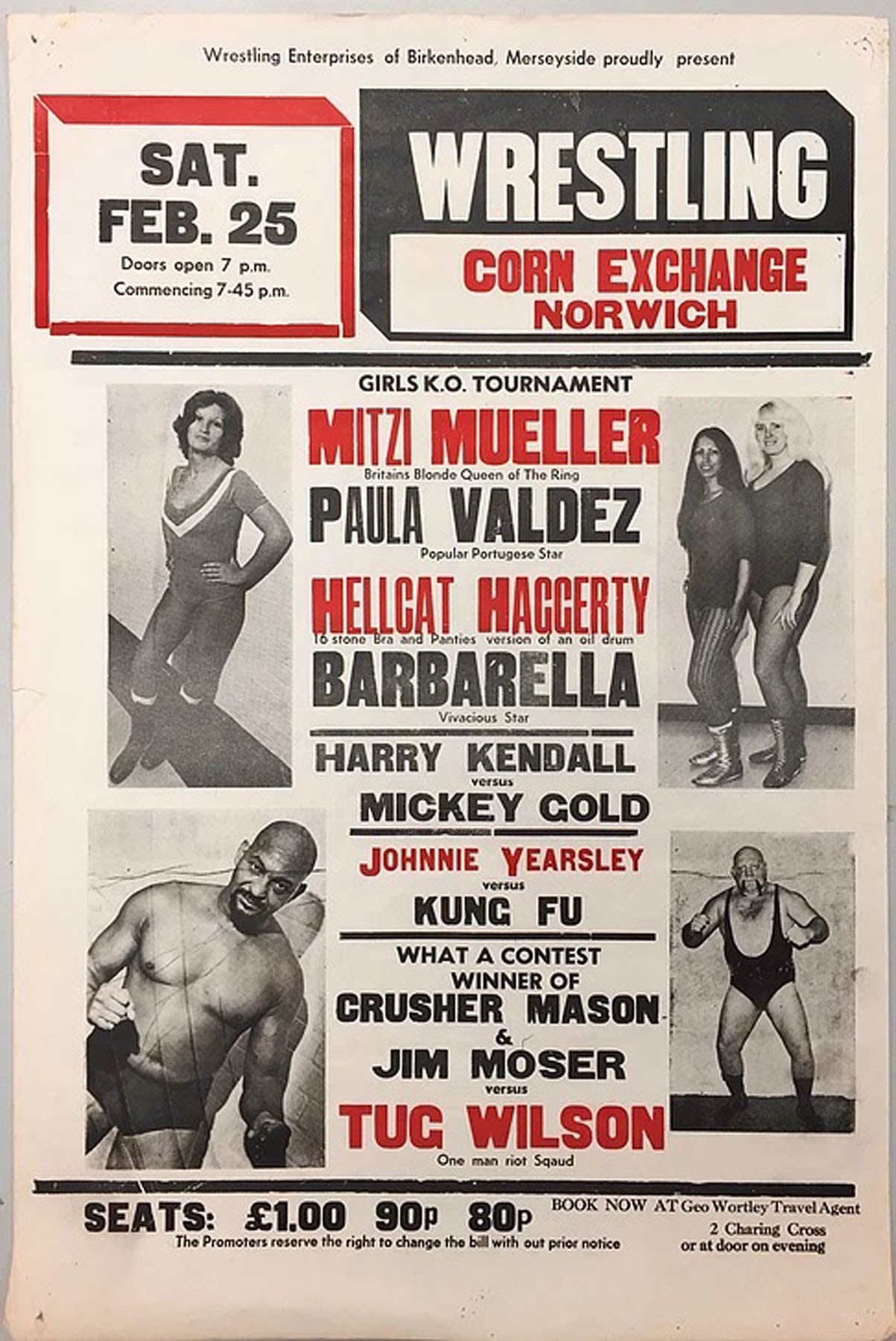 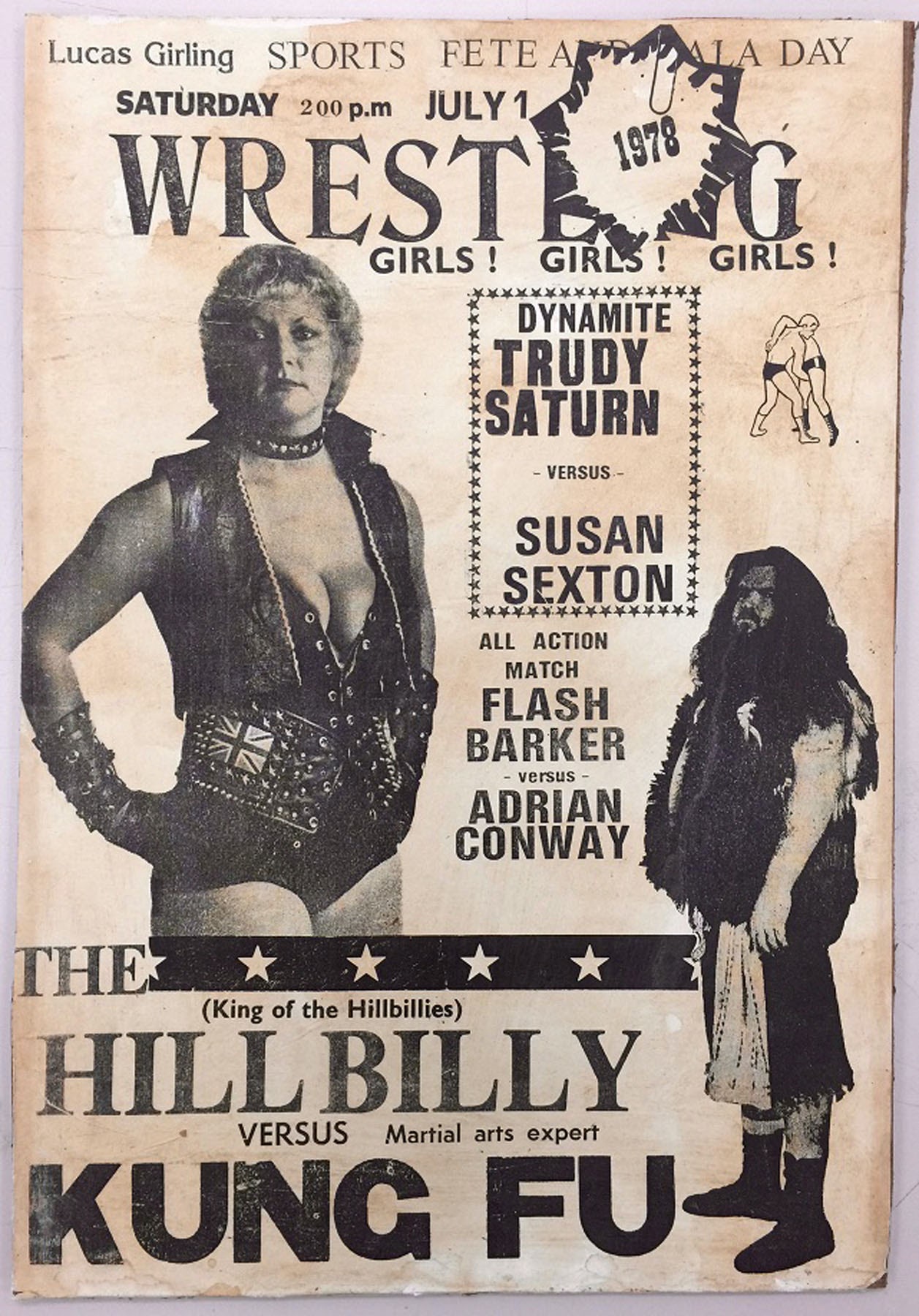 “There was definitely an element of titillation when you look at the posters and strap lines [for posters promoting all-female bouts] … but the whole pantomime of it was definitely going on in the women’s wrestling as much as the men’s.”

Many of the things that defined British wrestling – such as the element of pantomime and garish costumes – are the same in wrestling all over the world. But Purcell’s collection of ephemera reveals some British idiosyncrasies, with wrestlers often playing up to regional stereotypes.

“You’d have [wrestlers presenting themselves as] tough south London guys or northern lads … and there is something in the way they are spoken about in strap lines which is uniquely British – and primarily English,” he explains. “It’s a bit like how comedians will [build a character] based on what part of the country they come from. If they’re from Newcastle, they might foreground that in their act.” 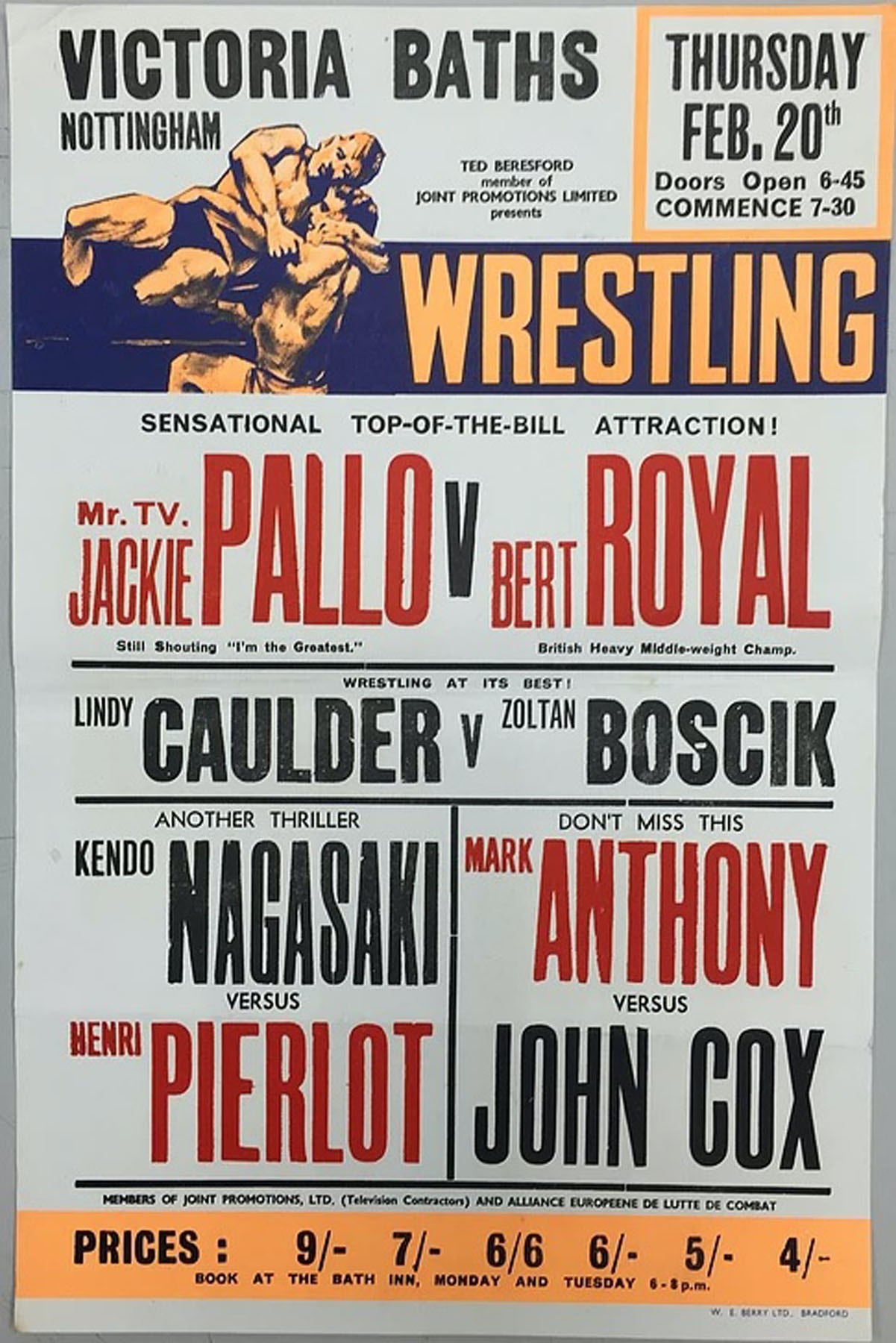 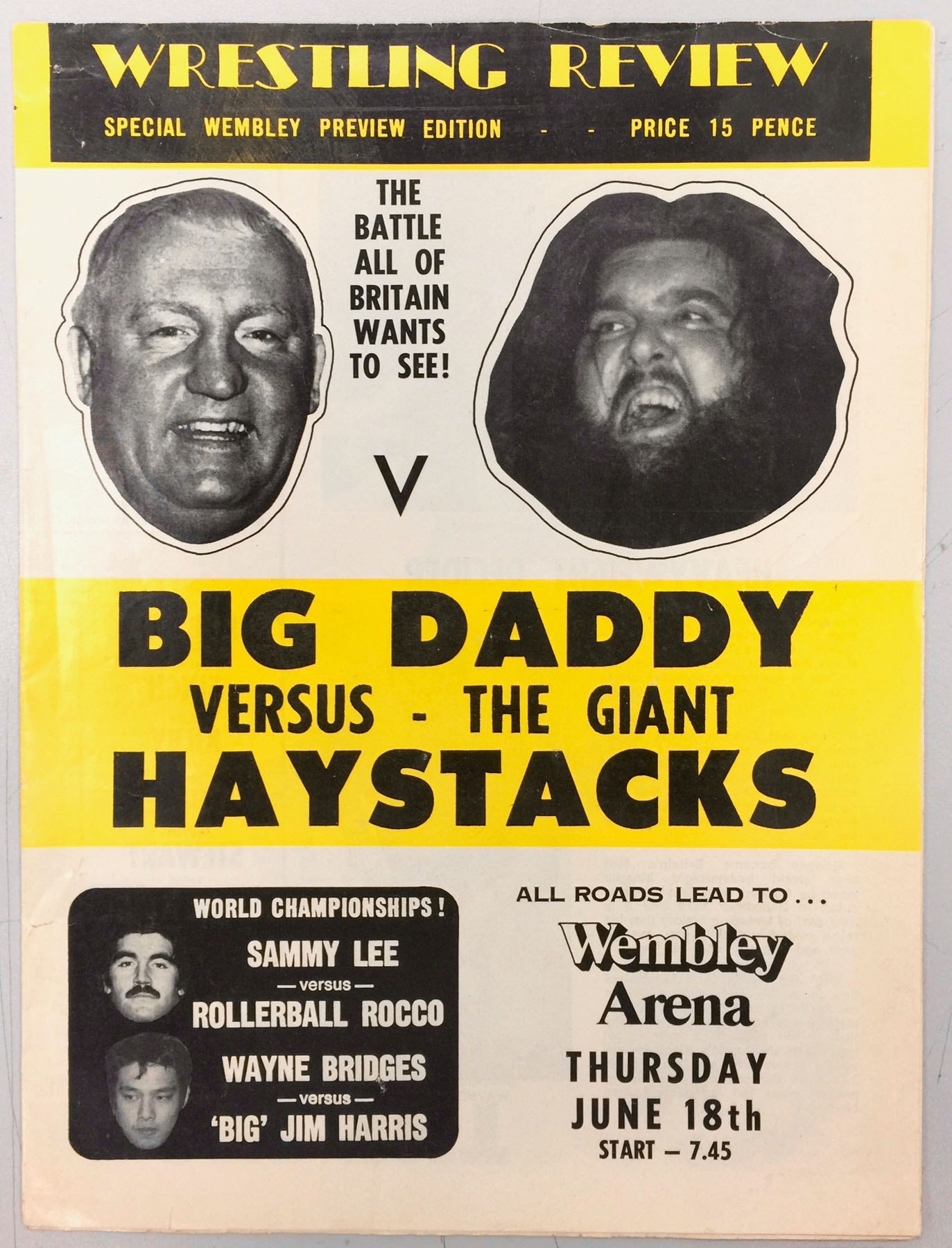 British wrestling was less extreme than the US version of the sport where the likes of The Rock and Hulk Hogan would compete in massive stadiums. “A lot of the British wrestlers, they were big guys … but they wouldn’t have been out of place propping up the bar in your local pub,” says Purcell. “There was something a bit more ‘everyday’ about them.” It was also a more lo-fi and low budget affair, played out in smaller venues (and without the fireworks or pyrotechnics).

Purcell’s ephemera dates from 1950 to 1990 – an era he describes as the golden age of British wrestling. The sport’s popularity declined after World of Sport was taken off air in the late 1980s and wrestlers were no longer household names. “It had lost its shop window. The reason I first went to wrestling was because I thought ‘wow, Big Daddy is going to be there’ … but once it was no longer on TV people didn’t see [the wrestlers] anymore,” explains Purcell. He also believes it became too focused on entertainment – leading long-standing fans to see it more as performance than sport. 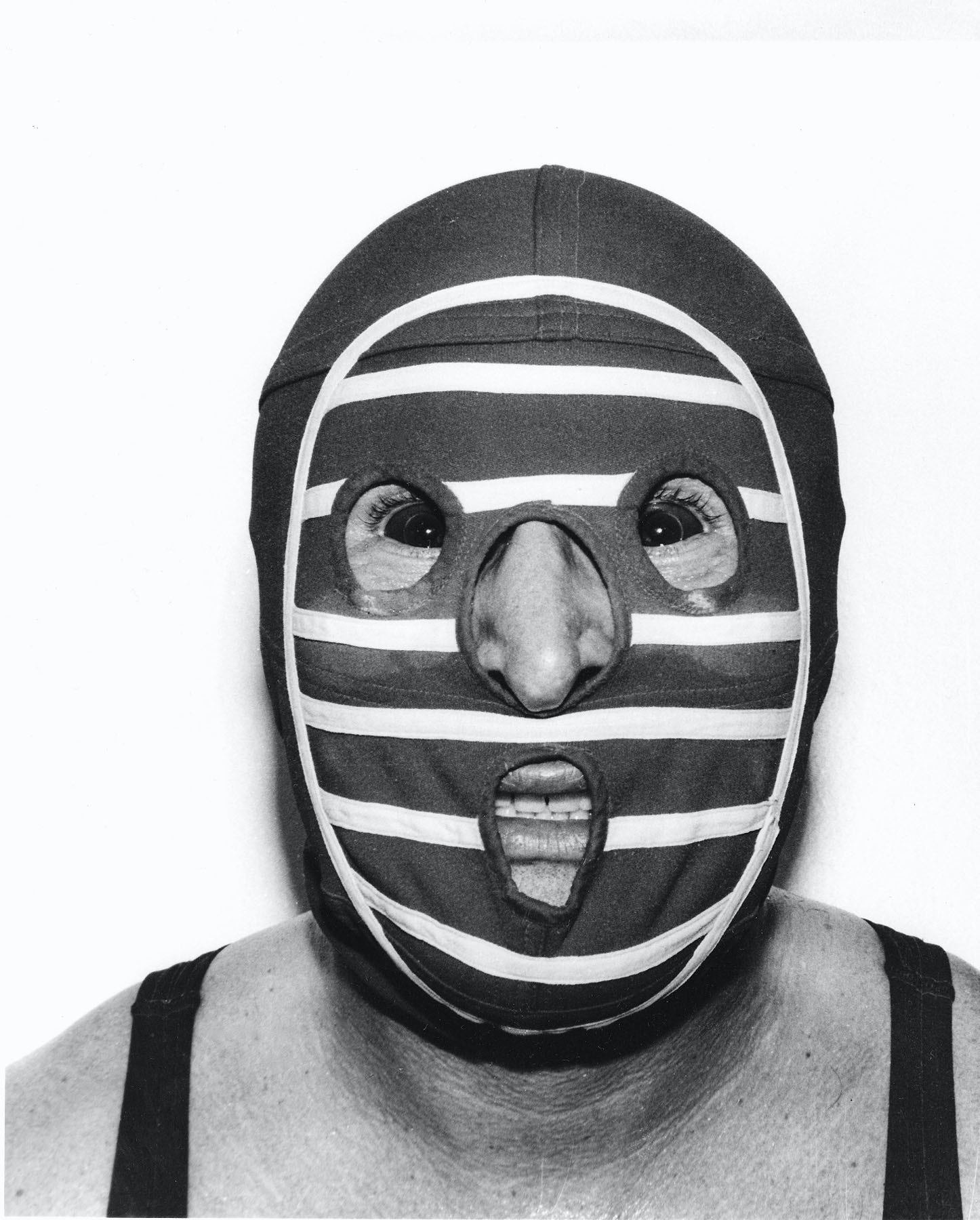 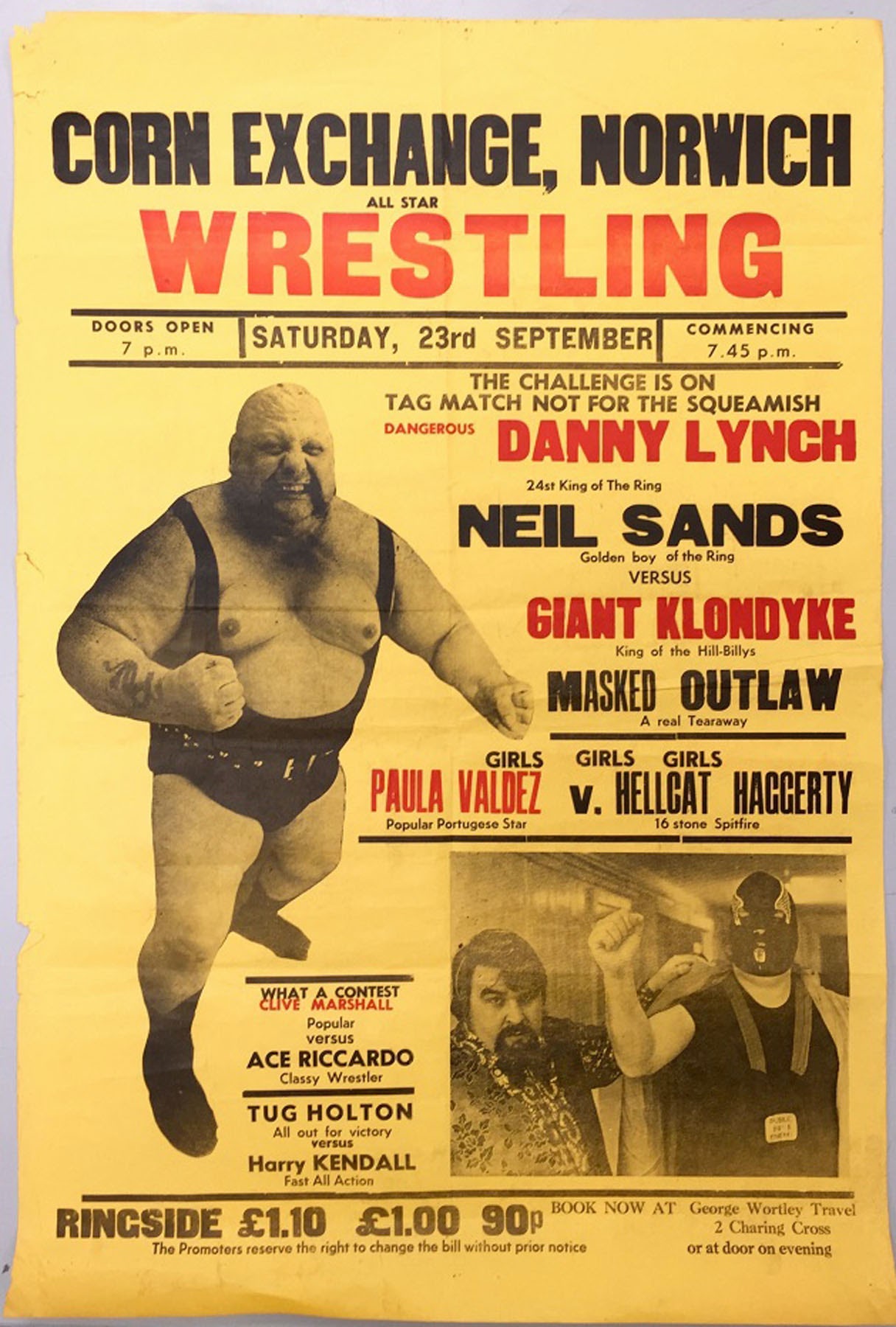 Wrestling is no longer a part of the nation’s weekend TV viewing but it seems to be enjoying something of a quiet resurgence. The WWE held its inaugural UK Championship at the Empress Ballroom in Blackpool last year. The Attenborough Arts Centre recently held a wrestling match in its gallery and Purcell says some of his colleagues attended a bout at Alexandra Palace. The audience may be a little different – Purcell believes it is more middle class and viewed in a “more knowing” way than it was in decades past – but the sport is still known for its costumes and pantomime.

Around 20,000 people turned up to see Purcell’s Grunts and Grapples exhibition in Tunbridge Wells but he admits that the book has a fairly niche appeal – which is why he’s decided to crowdfund it rather than approaching mainstream publishers. 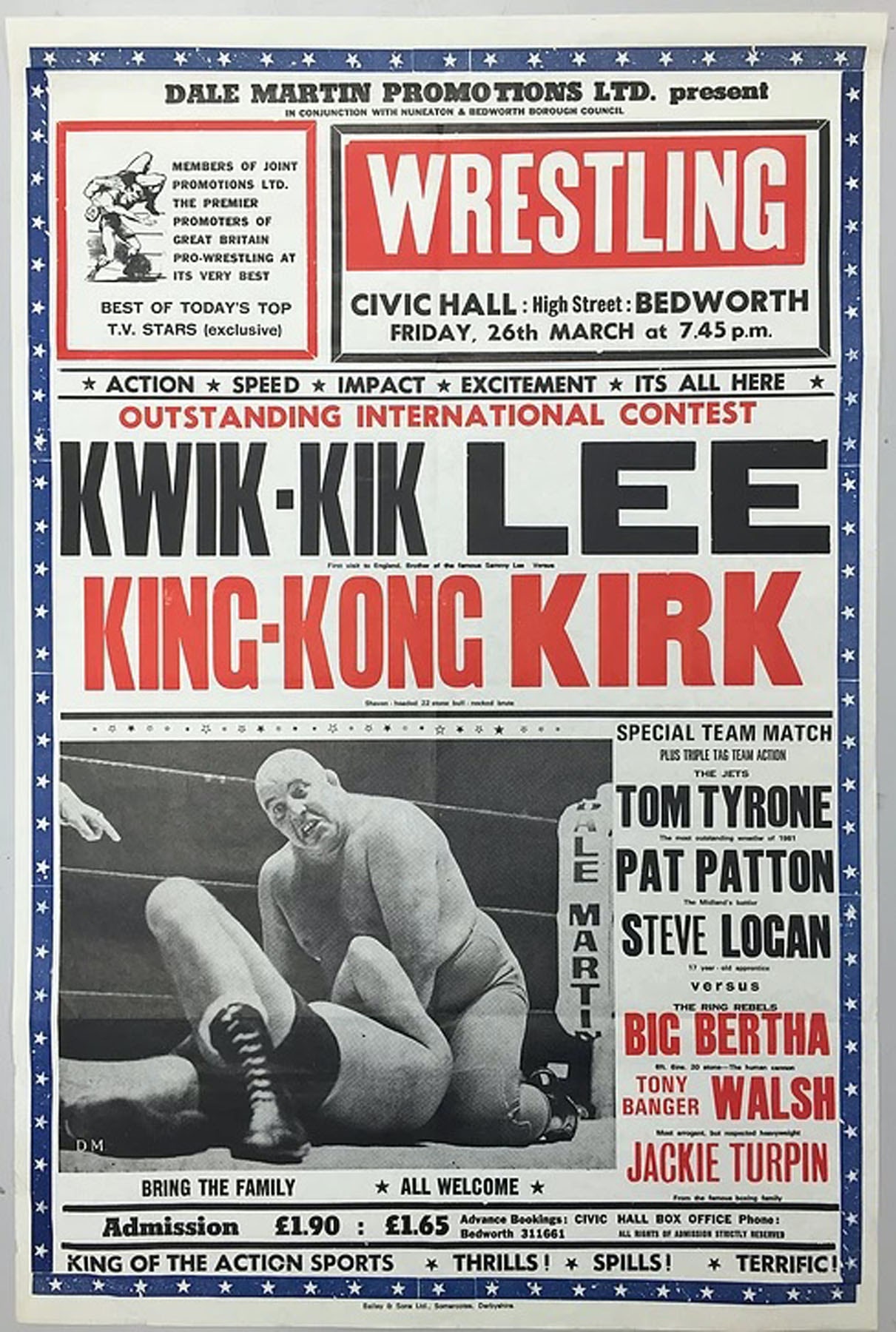 If he doesn’t manage to secure funding for the book he is keen to take the Grunts and Grapples exhibition to more UK towns and cities (particularly resort and seaside towns where wrestling was popular).

Purcell isn’t a wrestling fanatic and says he is more interested in the visual aspect of the sport than wrestling itself. His designs document a particular period in popular culture as well as a time when posters were still made by hand and printers doubled as designers.

“I feel a little uncomfortable when people try to peg me as a wrestling historian,” he says. “I’m not – I’m a design historian,” he adds. “There’s a nostalgic element for me but my fascination comes via these material objects.”

You can follow the book’s progress here or see more about the exhibition and Purcell’s collection at gruntsandgrapples.com