We’ve seen a whole host of imaginative and experimental projects come out of the practical restrictions imposed by lockdown, from animated music videos to Covid-themed emoji designs.

As a brand that is no stranger to experimentation in its campaigns, Gucci has been well placed to embrace the new normal. The fashion house’s latest creative experiment is Myristica, a comic book produced in partnership with biannual art magazine Kaleidosope to coincide with its new issue. 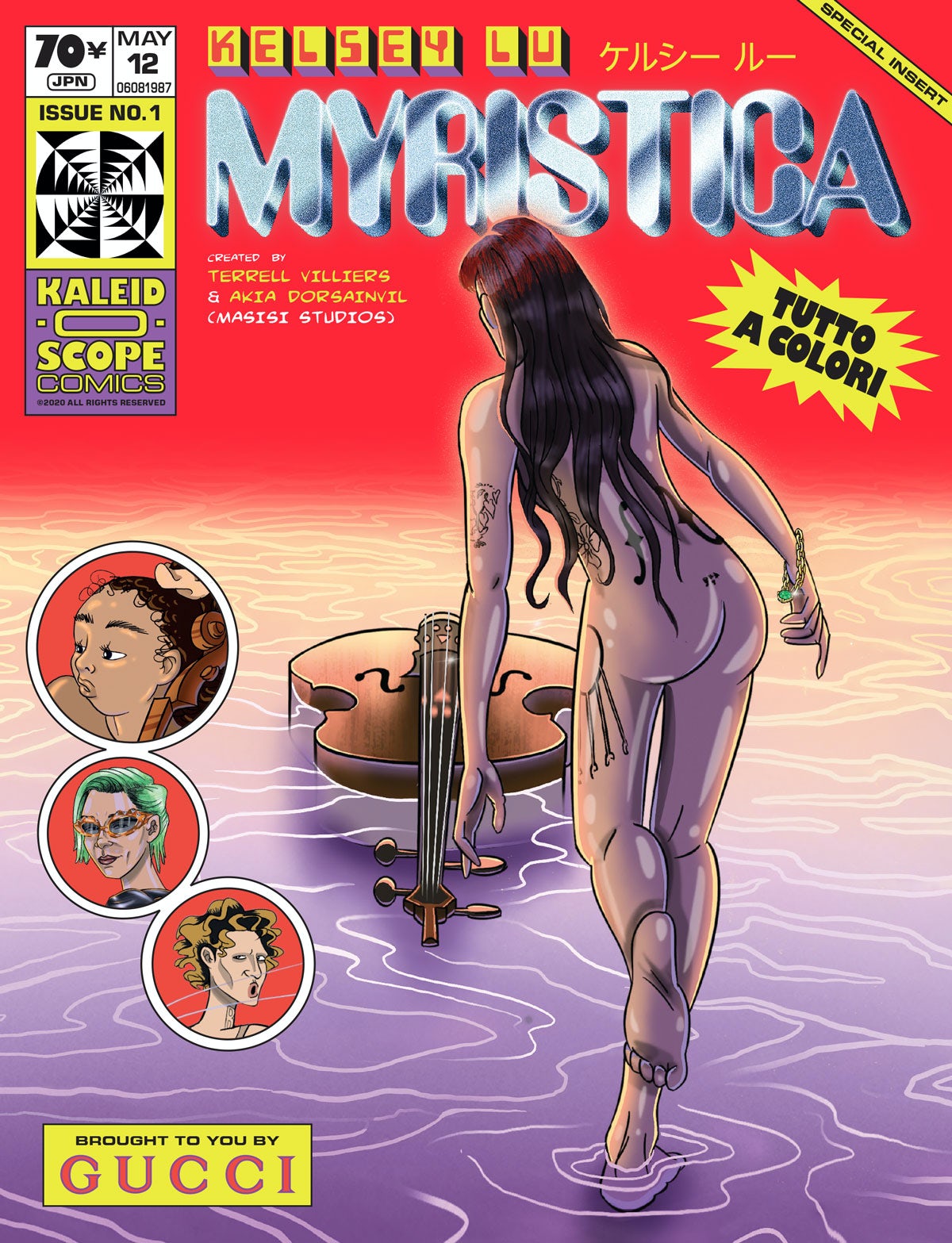 The team behind Kaleidoscope had worked with Gucci in the past, most recently on a book and exhibition by Harmony Korine in 2019, and had the idea to collaborate on a comic book after meeting another Gucci collaborator, cellist and songwriter Kelsey Lu, earlier this year.

“Funnily enough, this project actually started a couple months before the lockdown,” says Kaleidoscope’s publisher and creative director, Alessio Ascari. “The loose concept at the beginning was to create something that played with the idea of a fucked up superhero narrative, inspired by Lu’s artistic journey, her community, and interest in cosmology.” 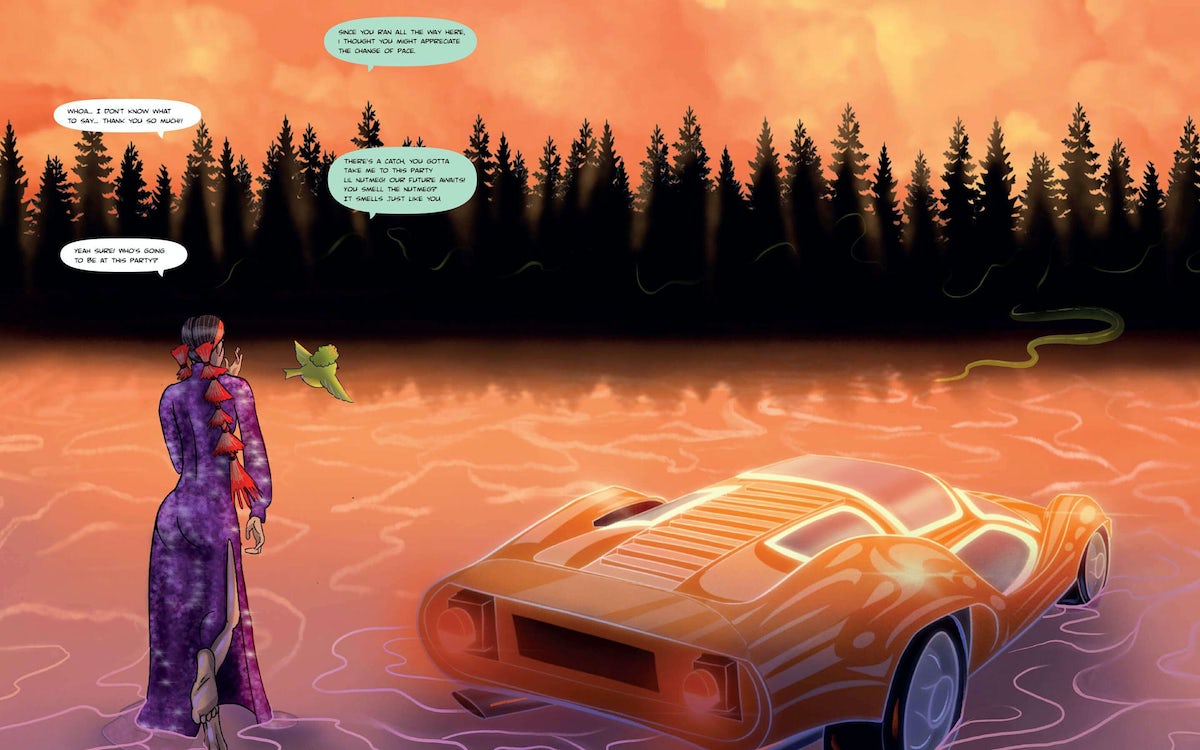 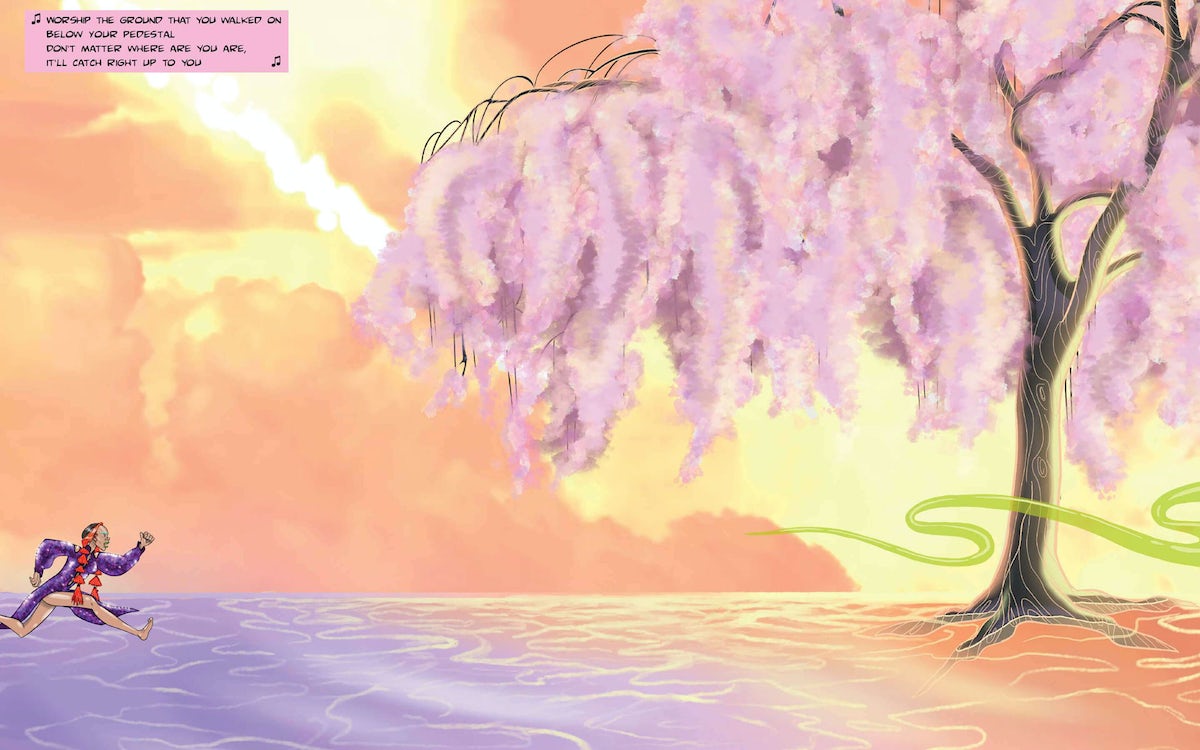 Titled Myristica, the comic draws on the same themes as Lu’s recent album Blood, which is partly an exploration of her Black, queer identity. “I’ve been a fan of comics since I was a kid, and graphic novels were something I started getting more into as a young adult when I started to realise the astoundingly complex storylines that can be contained within them,” she says.

“The freedoms and fantasies that can be held and explored within an illustrated story can be so incredible and somehow relatable. When meditating on the uniqueness of my own story, and how at times I’ve felt difficulty in finding commonality as a young, Black queer woman within the world of comics, I thought this opportunity presented itself as a way to open up that dialogue. With Gucci, it’s another way to expand that dialogue to people who might not as easily expose themselves to something like this.”

The comic’s distinctive aesthetic has been conceptualised and created by Terrell Villiers and Akia Dorsainvil of Masisi Studios, who brought it to life in under two months in the midst of lockdown and the recent Black Lives Matters protests.

In the illustrations, Lu is captured wearing Gucci ready-to-wear pieces and accessories including the Jackie 1961 bag archival design, which has been revived by creative director Alessandro Michele for its AW/20 catwalk show, and accompanied by a number of guest cameos including singer Florence Welch. 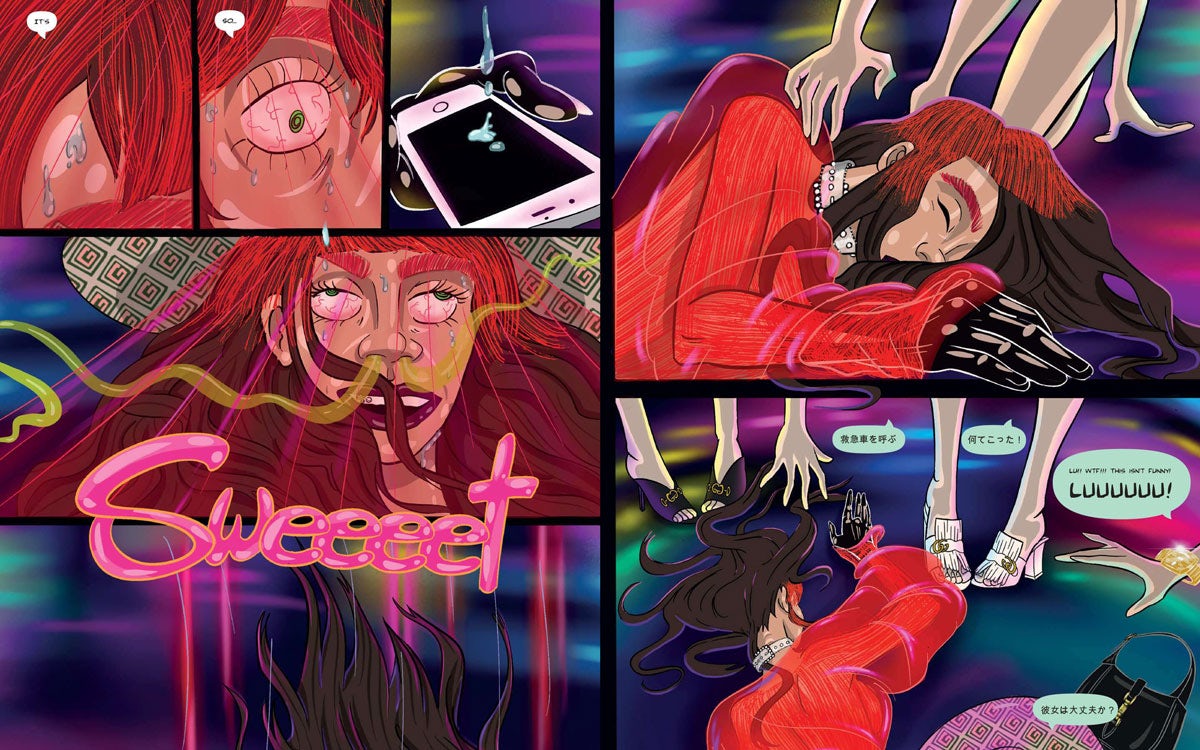 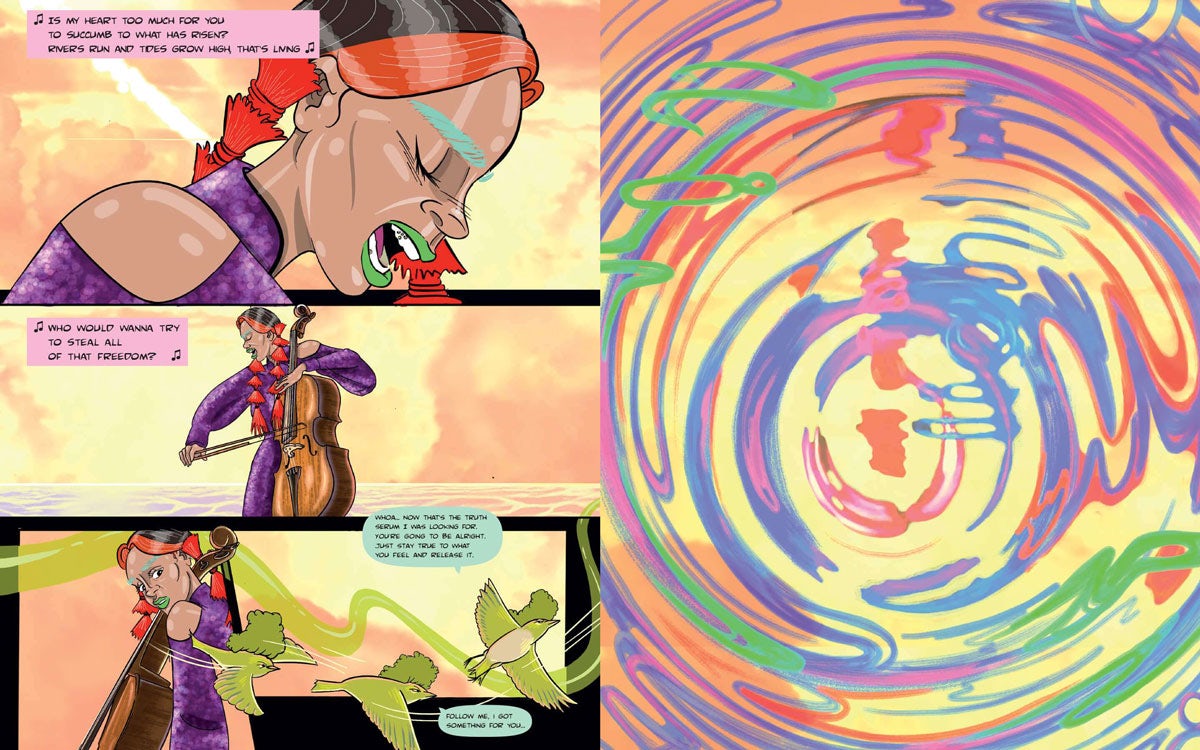 “I really wanted to tie in the element of fashion that is relatable such as the Gucci bracelet on Lu’s wrist. It was introduced in the comic as something Lu wore in her childhood,” says Dorsainvil, who led on the concept development, script and dialogue elements of the project.

For Villiers, who was the lead illustrator and art director, what was equally as important was capturing Lu’s personal style. “What some might not know about Lu, is that her astounding, eccentric, eclectic, styled looks are all very precise and intentional to her artistic practice. Her outfits are the visual narrative that accompanies the narrative in her music. Learning that made styling them the most fun part of illustrating Myristica,” he says. 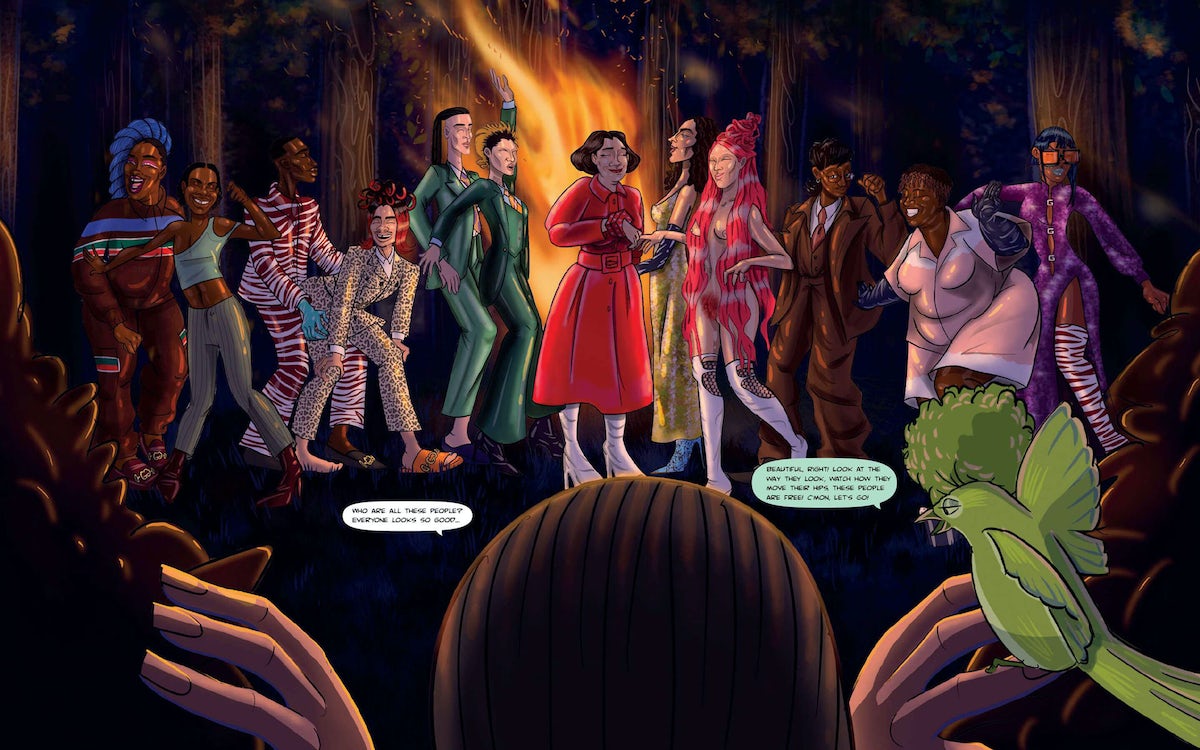