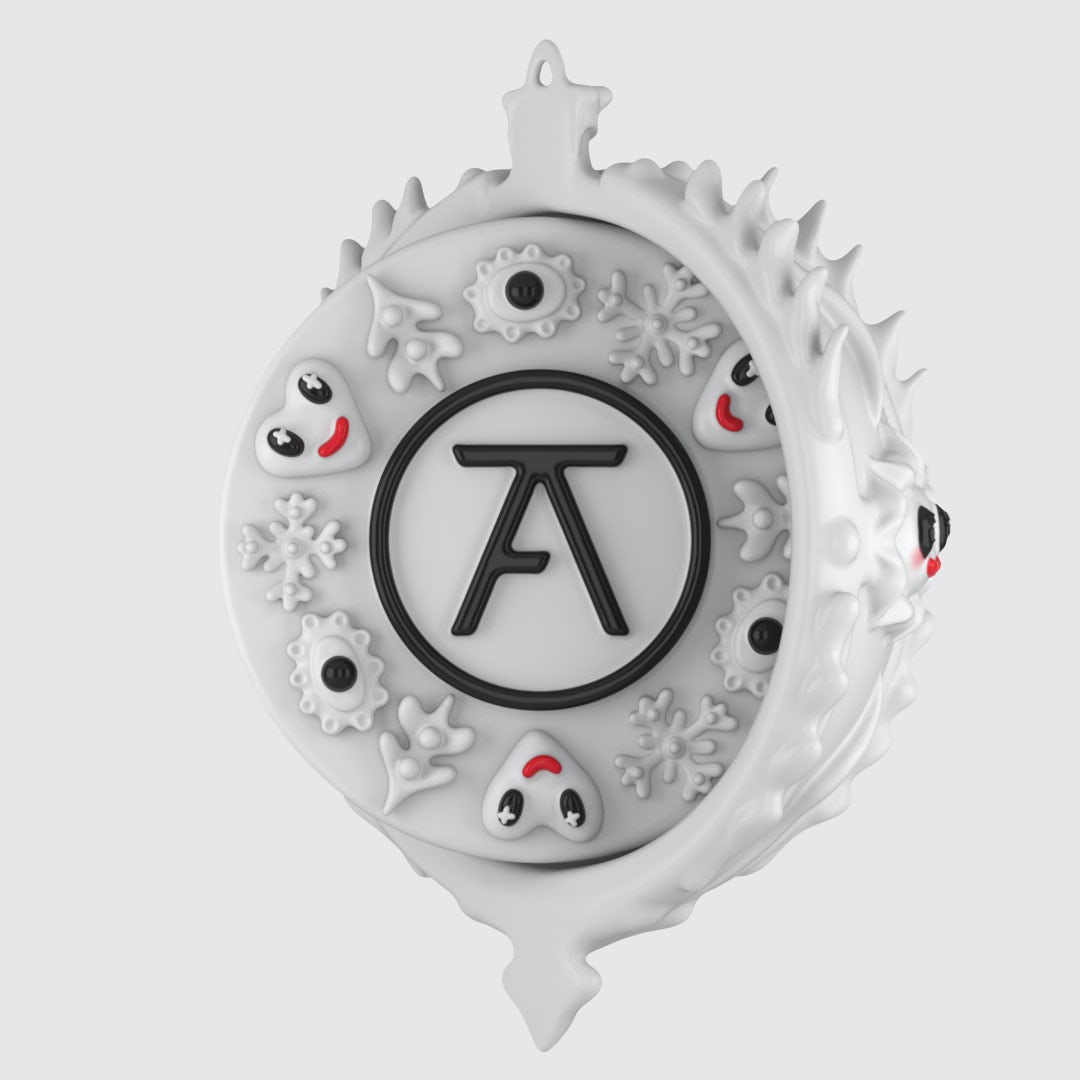 On Brief is part of Inspire, a year-long partnership between Creative Review, Facebook and Instagram to showcase creative talent and great campaigns on both platforms.

Throughout this year, we’ve been highlighting emerging creatives through our New Talent series. We’ve also invited creatives featured in New Talent to work with a UK-based business and create visual content to promote their brand or product on Facebook and Instagram. (See Kate Bones’ GIFs for Creative England and Archie Proudfoot’s work for Peanut, an app to help mums meet other mums with similar interests in their local area.)

Seven Feet Apart set a brief to create three to five visual assets that could be used to raise awareness of the brand and promote its products in the run up to Christmas. Gutless Wonder was selected to work on the project and created a festive animation and a custom pair of the brand’s ‘172’ trainers.

Gutless Wonder’s initial idea was to create a six-second animation including a festive symbol, a wheel and the brand’s logo. The wheel was inspired by co-founder Ian Cartwright’s surname (which means ‘craftsman’) and fellow co-founder Matthew Bagwell’s relation to famous engineer Isambard Kingdom Brunel. Her idea aimed to reflect Seven Feet Apart’s focus on craftsmanship and making shoes that are built to last (its shoes are handmade in Portugal and bespoke insoles come with a lifetime guarantee).

“Gutless Wonder’s proposal was a thoughtful, considered response and demonstrated how the creative idea would come to life,” says Bagwell. “[She] had done research into our heritage and illustrated how she could relate the brand’s rich story and aesthetic into her own art style.”

Gutless Wonder’s artwork often features eye-popping colours but for this she suggested using green and red (two of the brand’s core colours) to create a festive feel. After experimenting with designs, however, she decided to create an all-white animation with black and red accents. 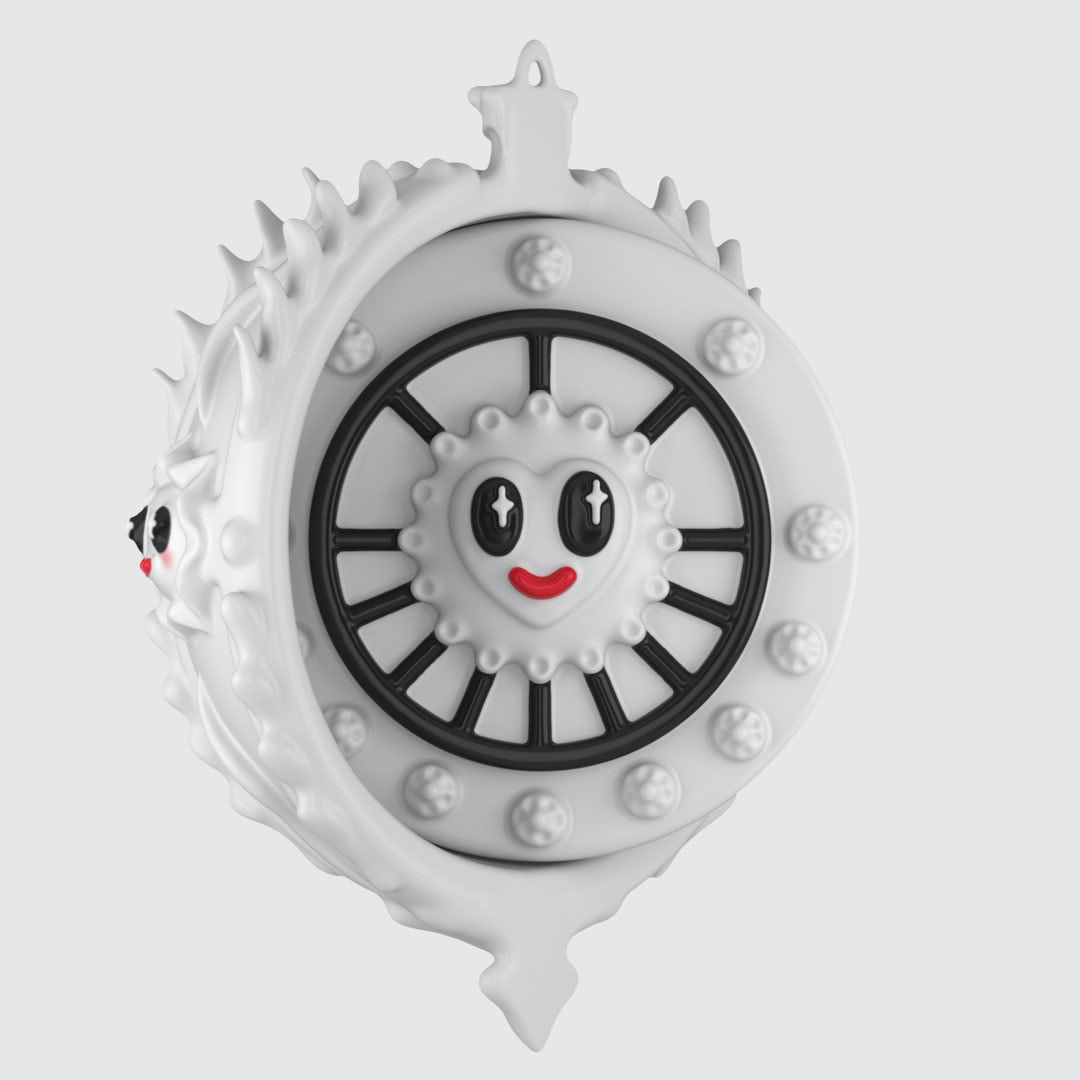 The animation was created using Cinema 4D and incorporates a wheel, the Seven Feet Apart logo and a bauble. The cheerful and charming artwork is designed to stand out against a sea of colourful images on Instagram.

“The animation was intended as a kind of ‘Merry Christmas’ message from the brand to their customers,” says Gutless Wonder. “If I break it down, the bauble says ‘Happy Holidays’, the logo says ‘from Seven Feet Apart’ and the motif represents our collaboration – almost as if that is the gift. It’s a simple little story that reveals itself without any words.

“I was really pleased with the design once it was in white because I think it brought calmness to the animation which might bring a moment of tranquility to someone’s feed whilst retaining the cheerfulness in the character faces,” she adds. 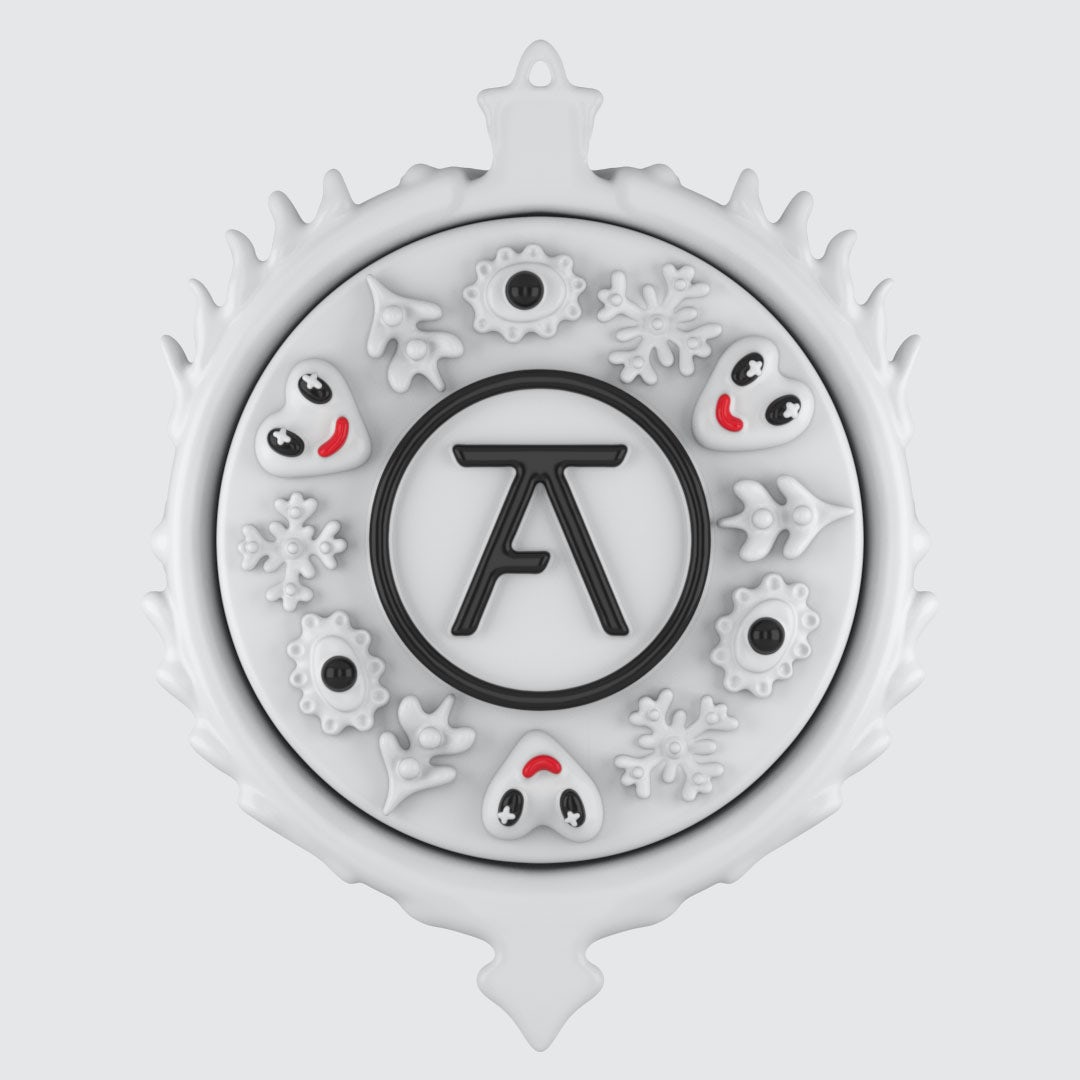 “The final animation had a more understated feel to a lot of the work in my portfolio but the design elements and characters are still very Gutless Wonder,” she says. “I was happy with how nicely the graphic logo of Seven Feet Apart sat alongside my more organic sculpted style despite how different they are at a glance.”

Seven Feet Apart also asked Gutless Wonder to customise a pair of its 172s. Using her own 3D printer, she created a set of bauble charms, a wheel motif and red and green fringing to sit on top of laces. 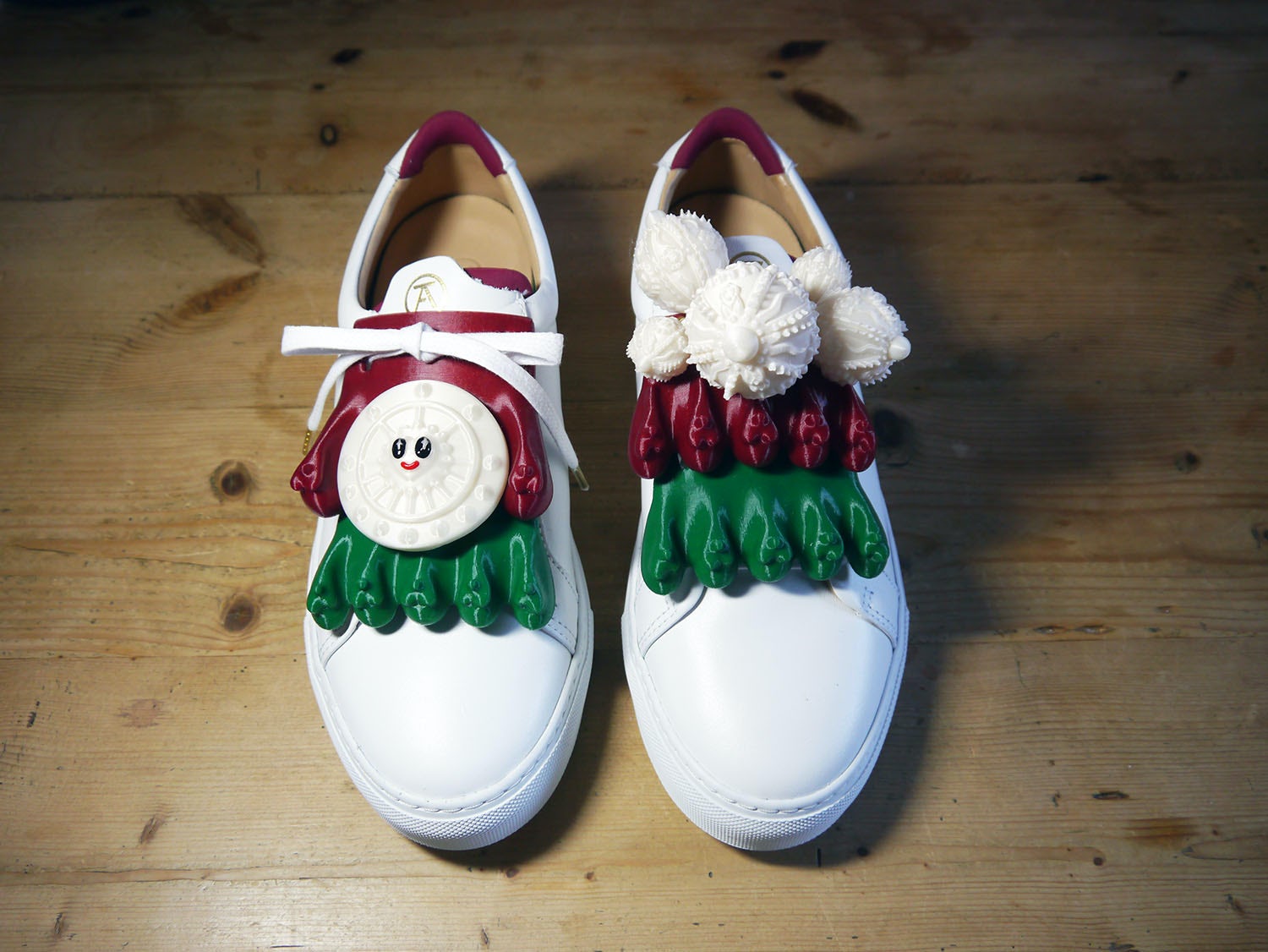 “The design had to match the animation and I wanted it to feel like part of the shoe and not just artwork stuck on top,” explains Gutless Wonder. “All of the components were printed in separate pieces which are held in place by the laces, so you can get a lot of different looks with them depending on how you mix them up.”

“I used my own printer because it gave me freedom to experiment without having to send off and wait for designs to be printed elsewhere. I designed the customisation so that it could be broken into separate parts and prioritised printing the most important elements first.” 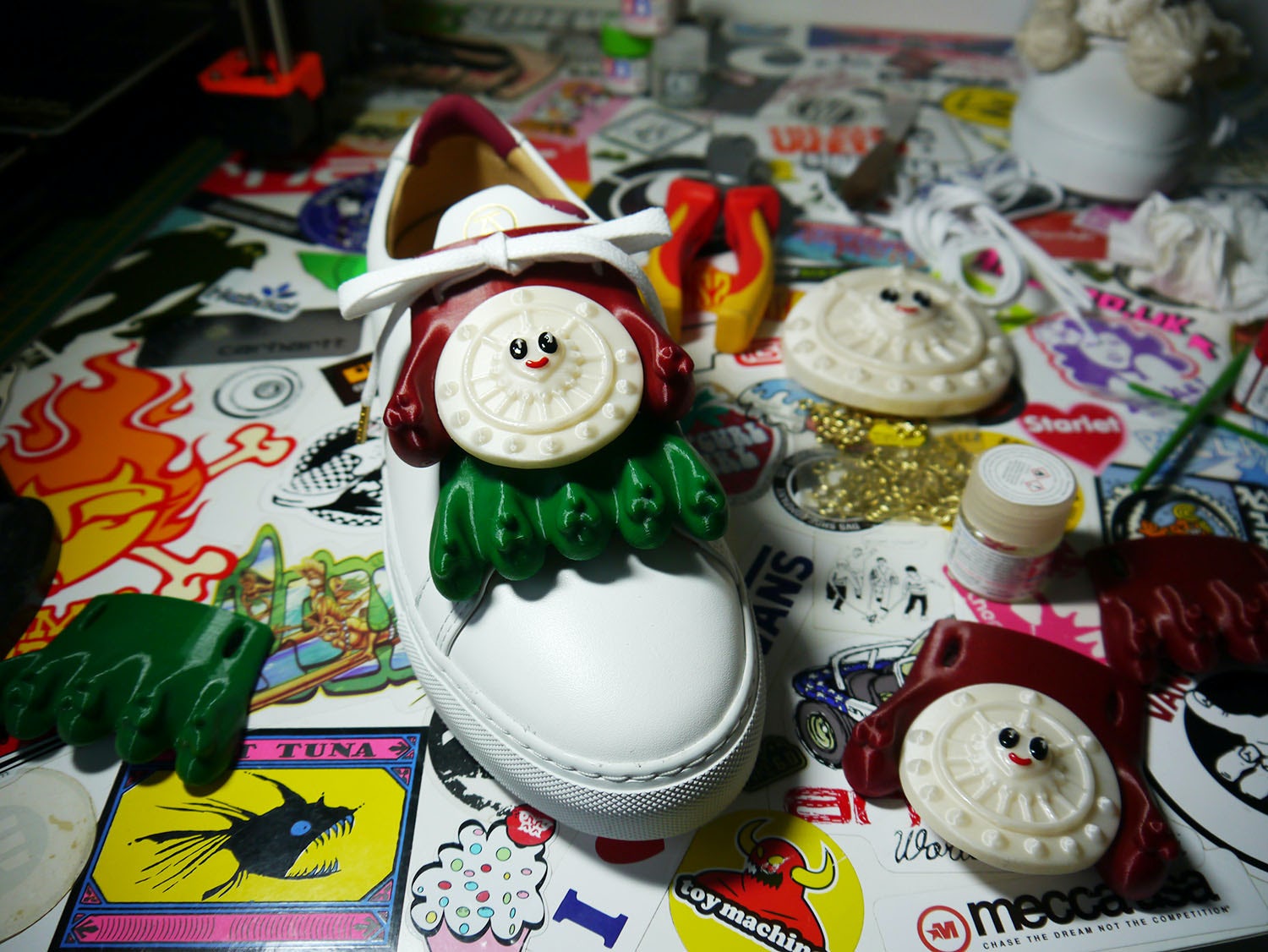 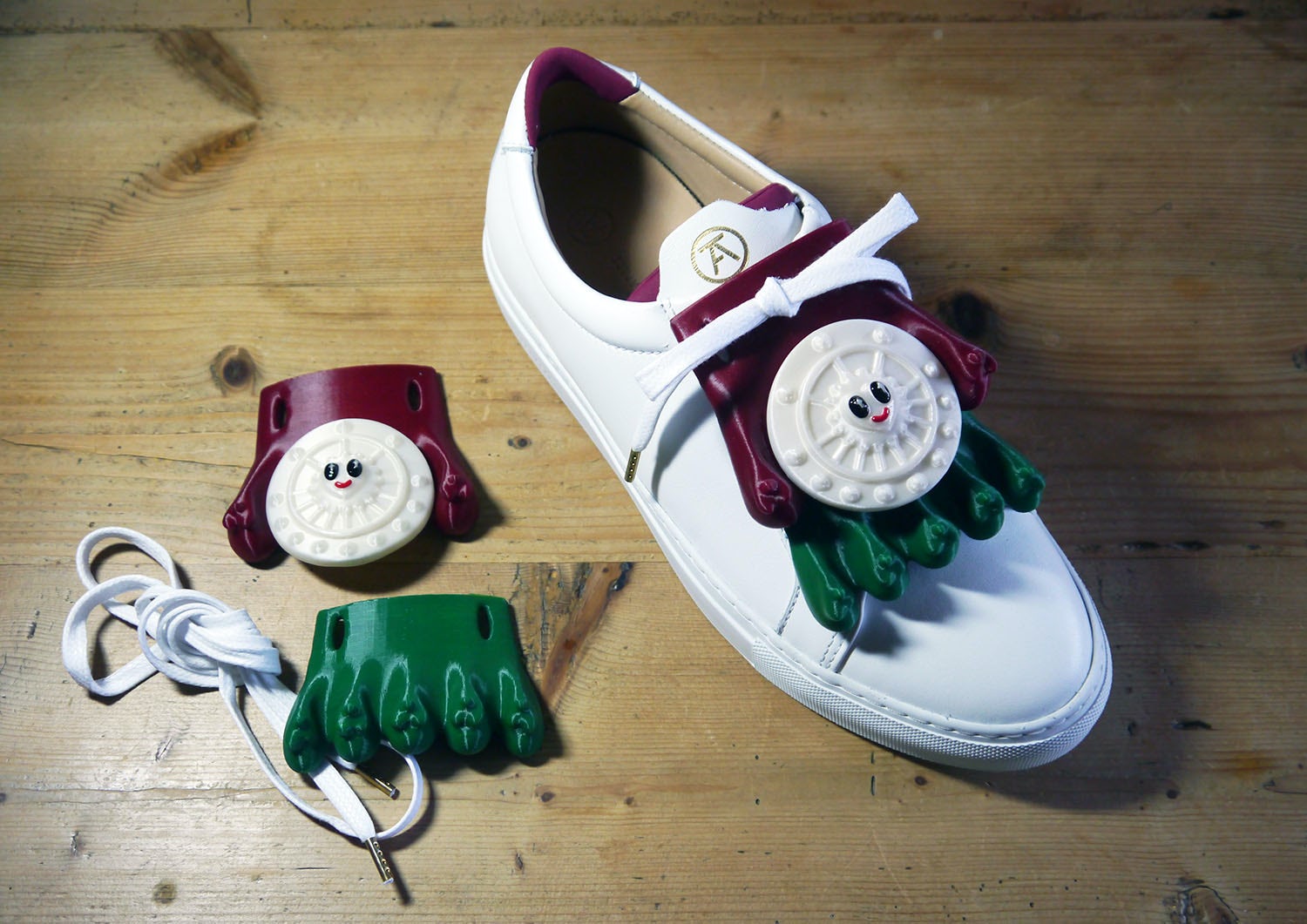 Gutless Wonder had just two weeks to work on the project. It was a tight deadline but being given freedom to refine and develop ideas helped speed up the process.

“Seven Feet Apart wanted something that was very much in my style and so I was very free creatively on this project,” she says. “I really love allowing work to evolve naturally and I feel that is what happened on this brief. Because of the tight deadline it made a lot of sense as time spent preparing proofs and negotiating over small details would only have taken away time from making the finished piece. It was great to have the trust of Seven Feet Apart to allow me to crack on and do what I do best,” she adds.

Bagwell and Giovanna Bettini (who leads Seven Feet Apart’s marketing) say the project encouraged them to think about creating assets for multiple touch points “in a way that we haven’t really done before”.

The pair expected to end up with a set of illustrations or photographs featuring products – “instead we ended up finding a very talented person with an extensive portfolio, which showed us how wonderful animations can also turned into sculptures and now we also have a pretty fantastic customised sneaker.” 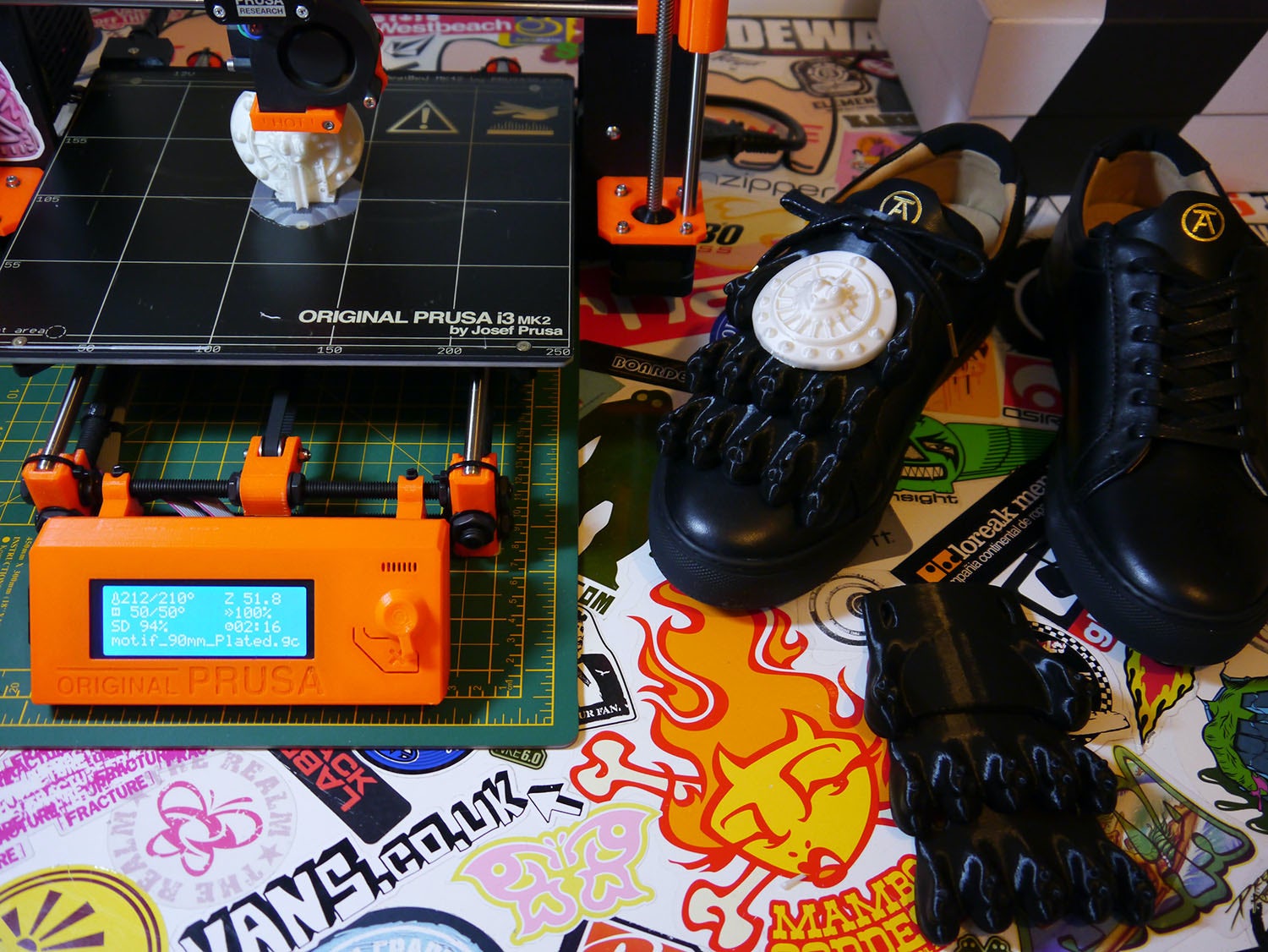 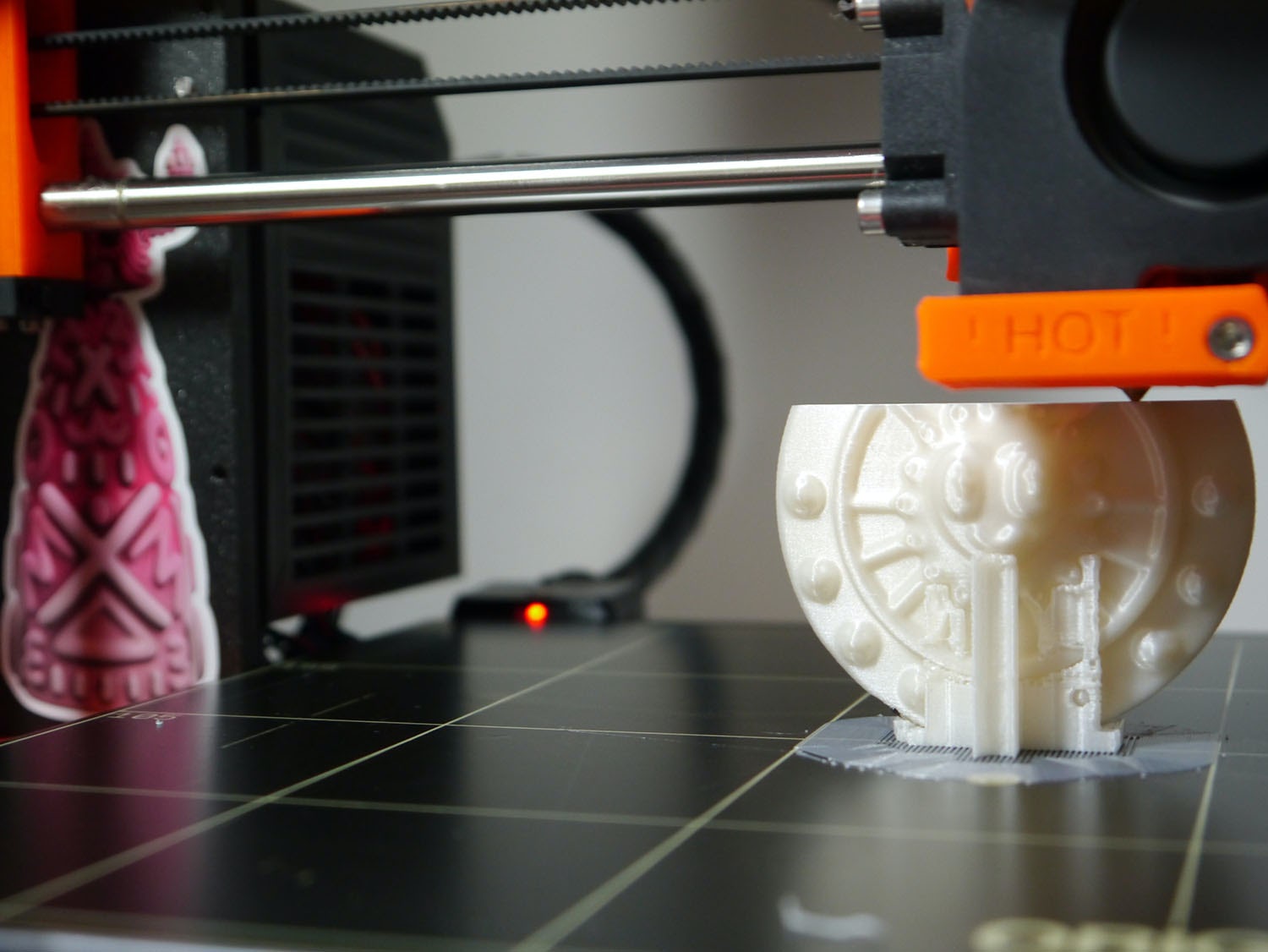 Seven Feet Apart’s Instagram and Facebook posts are usually focused on individual products but for this project they have taken a different approach. The brand has collaborated with artists and designers before (Carter & Wong co-founder Phil Carter customised a pair of 172s) but this is the first time it has worked with a creative to produce original content for social media.

“We’ll definitely do more designer collaborations for social media in our future campaigns,” say Bagwell and Bettini. “Collaborating with creatives will give you more value than just [the creative assets] themselves. By making connections, a little project can give life to a big idea.” Offering some advice for other startups, the pair recommend looking for artists and designers that identify with the brand. “Similarities can even be found in small details,” they add. The campaign launched this week and will be running throughout the festive period. 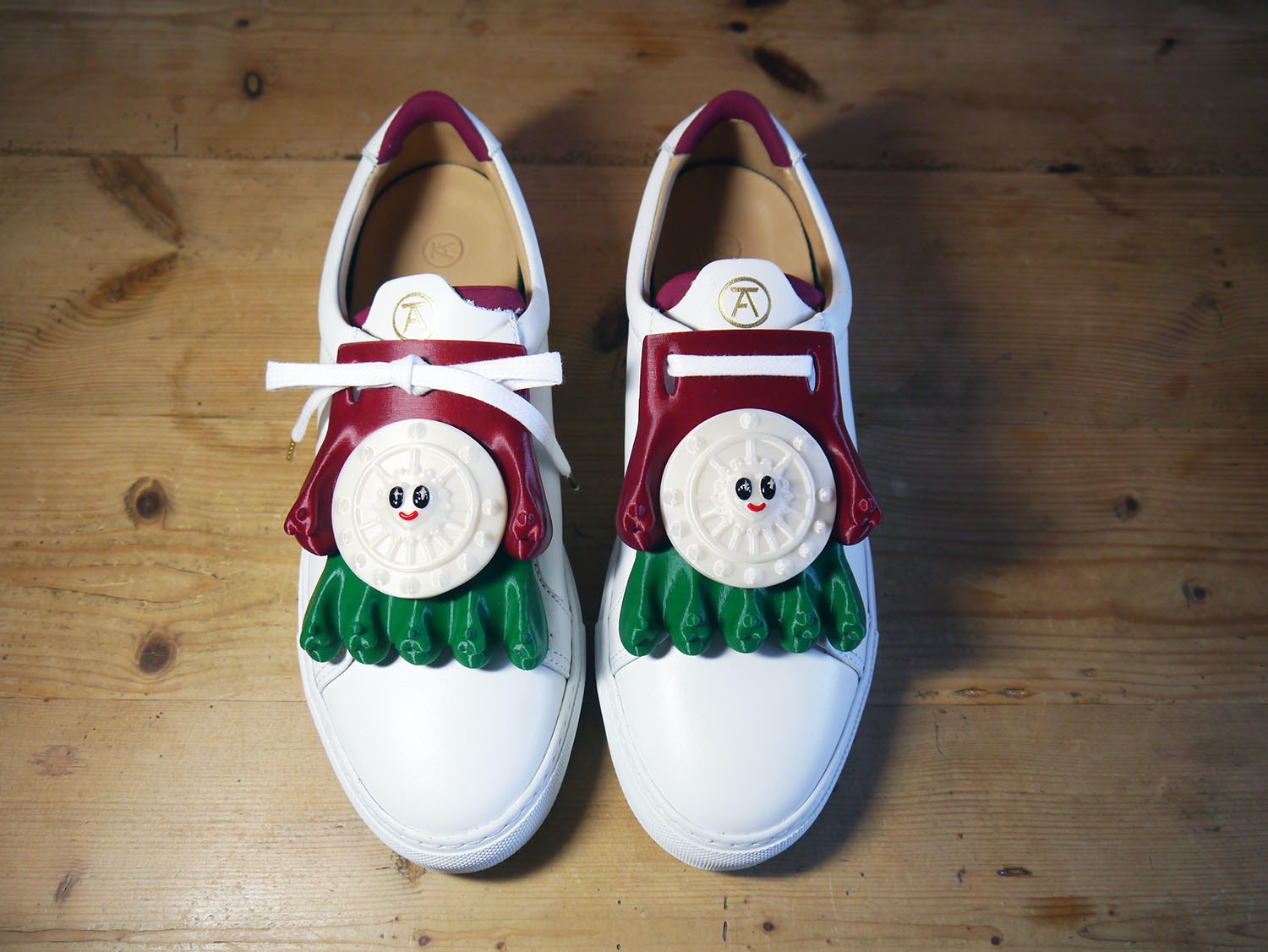 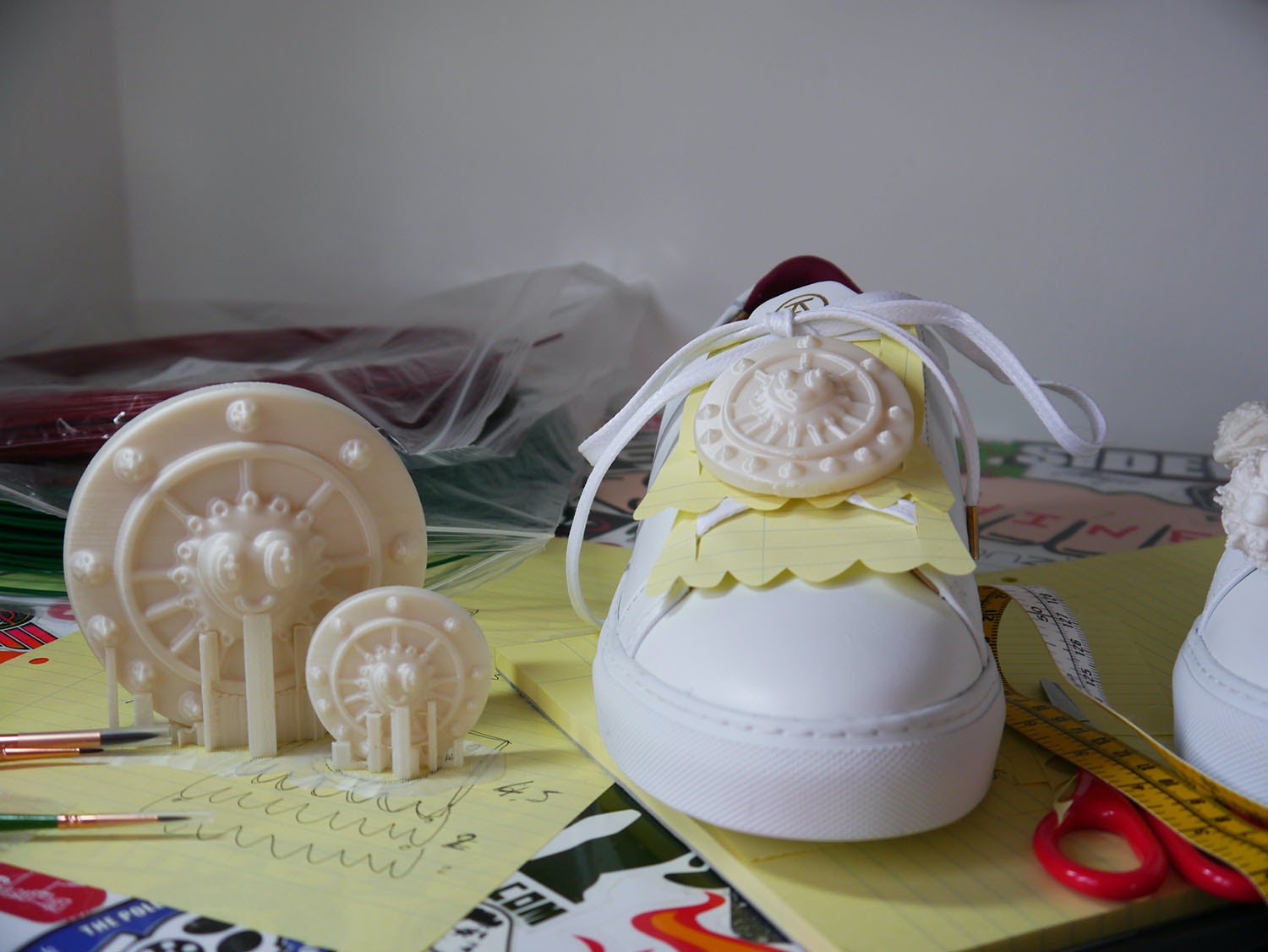 On Brief is part of Inspire, a year-long partnership between Creative Review, Facebook and Instagram to showcase outstanding creative work across both platforms. Facebook and Instagram’s Creative Hub was launched this year to help the creative communities understand mobile marketing. The online tool allows creatives to experiment with content formats – from Instagram video to Facebook Canvas – and produce mock-ups to share with clients and stakeholders. It also showcases successful campaigns created for mobile. Try out the mock up tool at facebook.com/ads/creativehub and see the inspiration gallery at facebook.com/ads/creativehub/gallery.

Creatives are paid for their involvement in On Brief and are not asked to produce speculative work – only a rough outline of their ideas – at pitch stage.