We’re at a point in the evolution of tech where we’ve started to seriously consider the ethical implications of the digital products we use. In fact, we’ve been discussing a lot of these things on CR this week. Are we spending too much time on our devices? Is over-exposure to media causing mental health issues? Who is responsible for designing morally sound products? Do tech companies have too much data on us?

There are opinions aplenty, but little consensus on the best way to move forward. For now, it seems like there is a growing number of smaller initiatives fighting against the status quo; internet browsers that don’t collect your data, Apple’s Screen Time app which helps you limit the hours you spend on your phone and so on.

Dating app Hinge is positioning itself as part of this wave of alternatively designed products. When dating apps like Tinder were first introduced to the world, they were seen as a harmless way to find love. But with the possibility of finding the perfect partner came a rather sinister by-product; the gamification of dating where ‘players’ spend hours objectifying other human beings and swiping to ‘win’ one with desirable specifications.

One of the main ethical conundrums with all tech products, as with dating apps, is that success is measured based on many problematic metrics: one of which is time spent on the app or product. Notifications grab at you, trying to bring you back to read a comment. A video autoplays as you scroll through your feed to keep you there for just those few seconds more. Add those few seconds to everyone else’s few more seconds, and what you have is success from the tech owner’s point of view.

Hinge seems to be taking a different stance, reminding users repeatedly that it is “Designed to be deleted”. As the app rolls out a fresh new design, we speak to CMO Nathan Roth about Hinge’s approach to measuring success and the design features that encourage users to delete it.

The new design trades a muted, understated aesthetic for lively illustrations and vibrant colours. But more importantly, the upgraded interface keeps reminding users that the end goal is to meet and delete the app, not to spend time on it.

The app has been around since 2012, and stood out initially for doing away with the swipe function. Swiping is regarded by many ethicists as one of the major issues with dating apps. Swiping feels game-like, with a successful match filling you with the same happy hormones you get from winning a jackpot on a slot machine. You don’t know if you’re going to get a match or not; the guessing, hoping and ‘winning’ makes the experience addictive. Hinge does things differently. “Because we believe your dating life shouldn’t be a guessing game, we let you know when someone’s interested in you,” explains Roth. It removes the anticipating, making the process less addictive.

Hinge’s interface almost forces you to learn more about a potential partner by laying out the profile in a way that requires careful consideration rather than quick scanning. Profile pictures are interspersed with answers to prompts; like “I know the best spot in town for” or “The most spontaneous thing I have done is”. This facilitates communication rather than passive consumption.

Apart from doing away with the swipe and designing a more interactive profile layout, the Hinge app actively encourages you to meet and take things offline. The company claims it doesn’t measure success based on time spent on the app. “We measure success by the number of dates we set up each week,” Roth tells us. Last year for instance, the app launched a feature called ‘We Met’ to get feedback on its people’s dates, with the aim of learning more about individual members and streamlining any future recommendations. 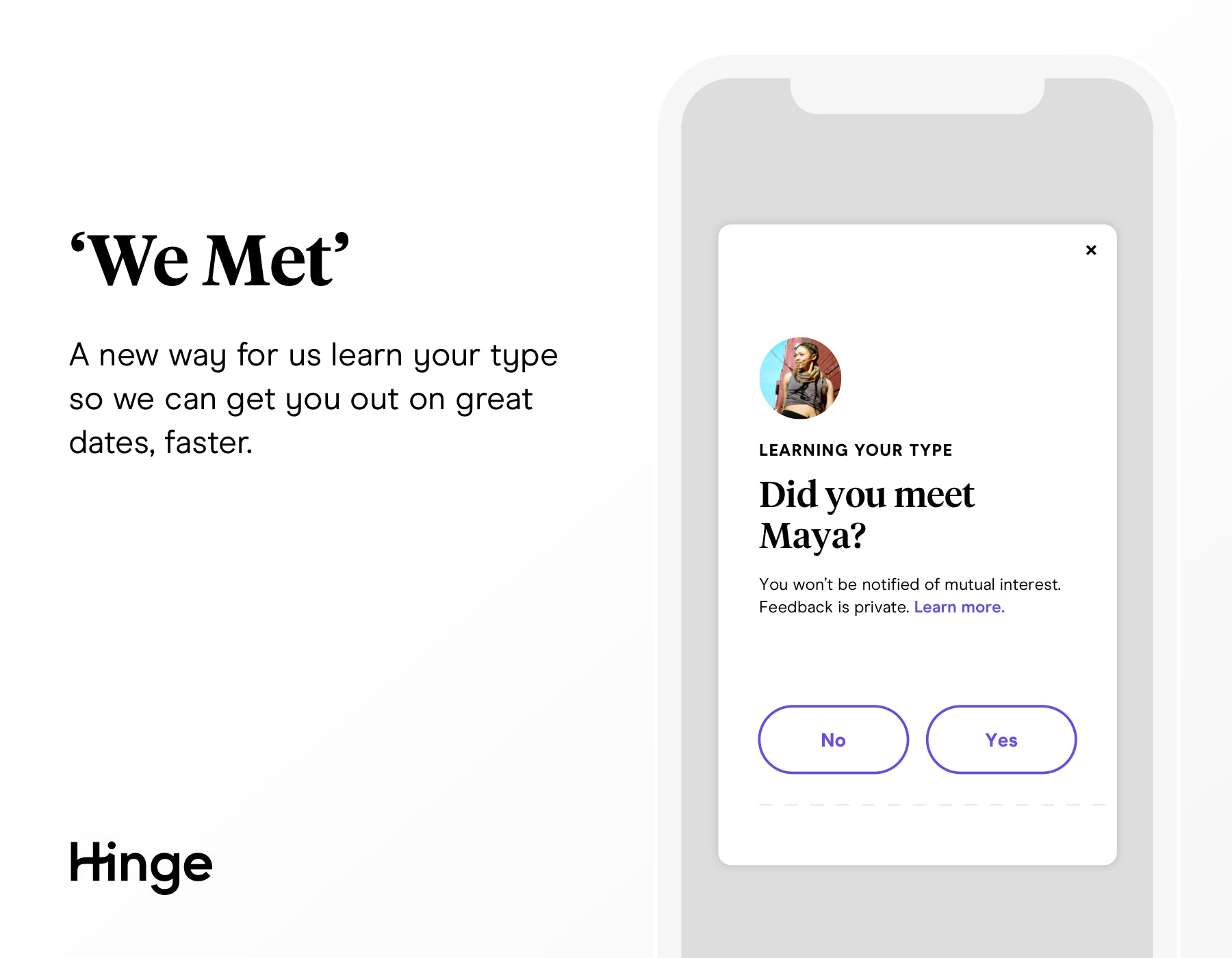 Roth tells us this feature has had a positive impact. “It’s working. Hinge members only spend six minutes a day setting up dates.” he says. Based on people’s responses within the ‘We Met’ feature, the company says it is creating a date every four seconds, and that three out of four first dates made via Hinge turn into second dates.

If you indeed want to delete the app, you can easily do so using a button which has been changed from red to grey – to reinforce the idea that deleting Hinge isn’t a bad thing.

Last year, Hinge also made the news for announcing they were looking to recruit an Anti-retention Specialist, a role which is in the final stages of being filled, we are told. Roth says this ‘digital wellness expert’ will help identify more ways to encourage users to to get off the app.

Having used the app myself, I can attest that Hinge does feel healthier than some of the other dating apps out there. That said, the other big issue within the tech world is one of monopolies. Even while Hinge attempts to be anti-Tinder, it turns out that little under a year ago the Match group (which also owns Tinder, OkCupid and Match.com) began acquiring shares in Hinge and as of a couple of months ago is the sole owner.