The creative fortunes of ad agencies wax and wane over the years, typically with runs of ‘hotness’ followed by periods in which, well, things get a little tepid. Few manage to maintain excellence year in, year out for four decades.

As Eliza Williams wrote in her intro to a major piece marking W+K’s 30th anniversary in our November 2012 issue, “Longevity is rare in advertising. By its nature, the industry is about the new….Clients come and go, agencies get bought and sold, and relationships are often fickle. Against this backdrop, the Wieden + Kennedy network appears to be something of an anomaly.” 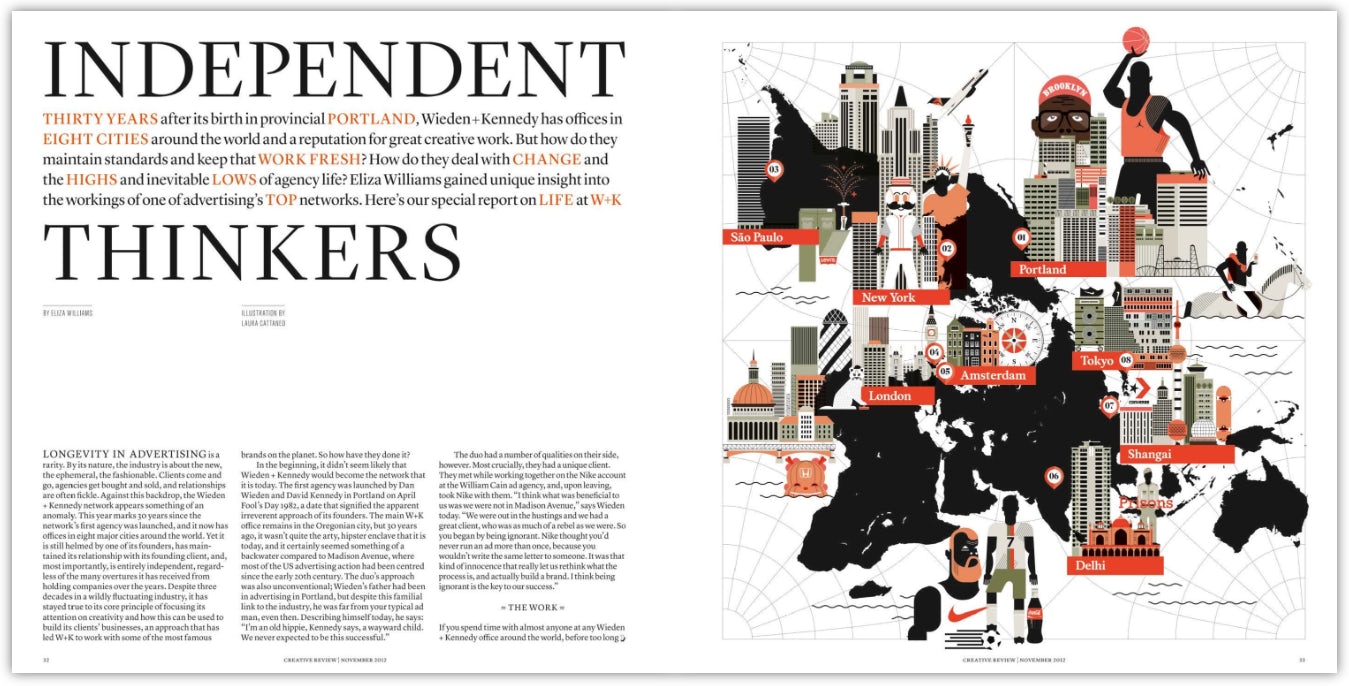 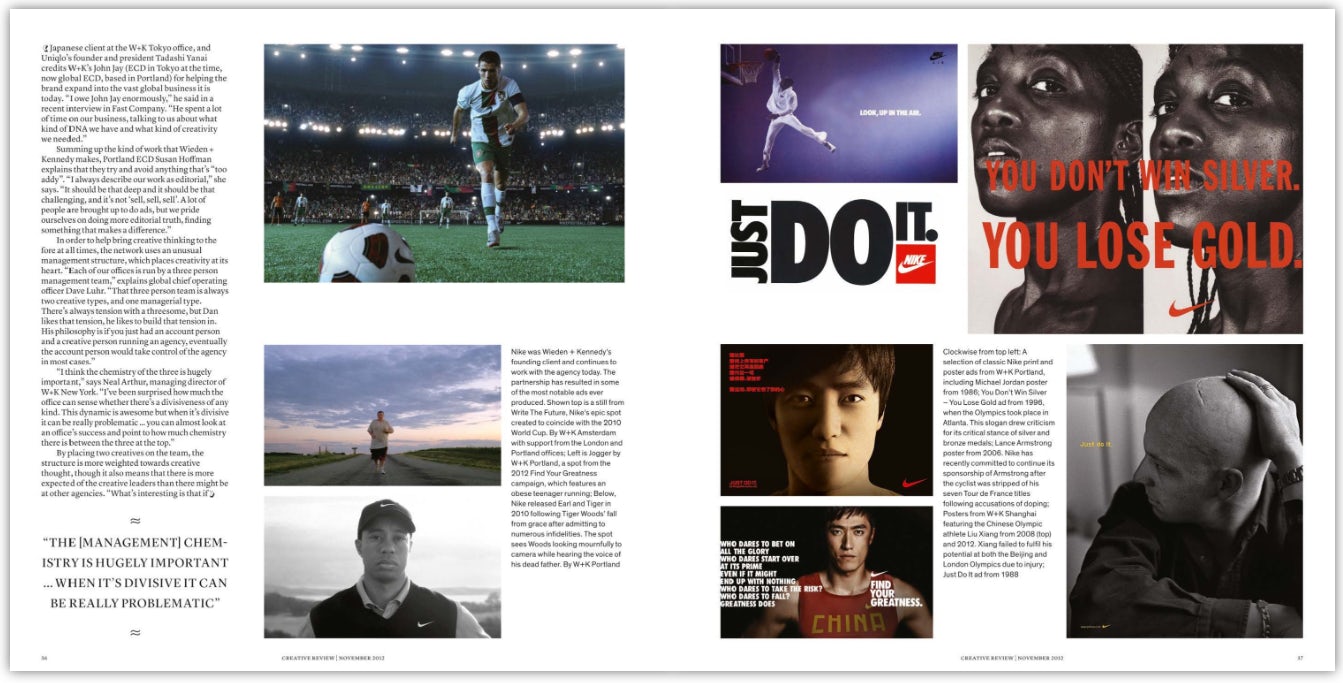 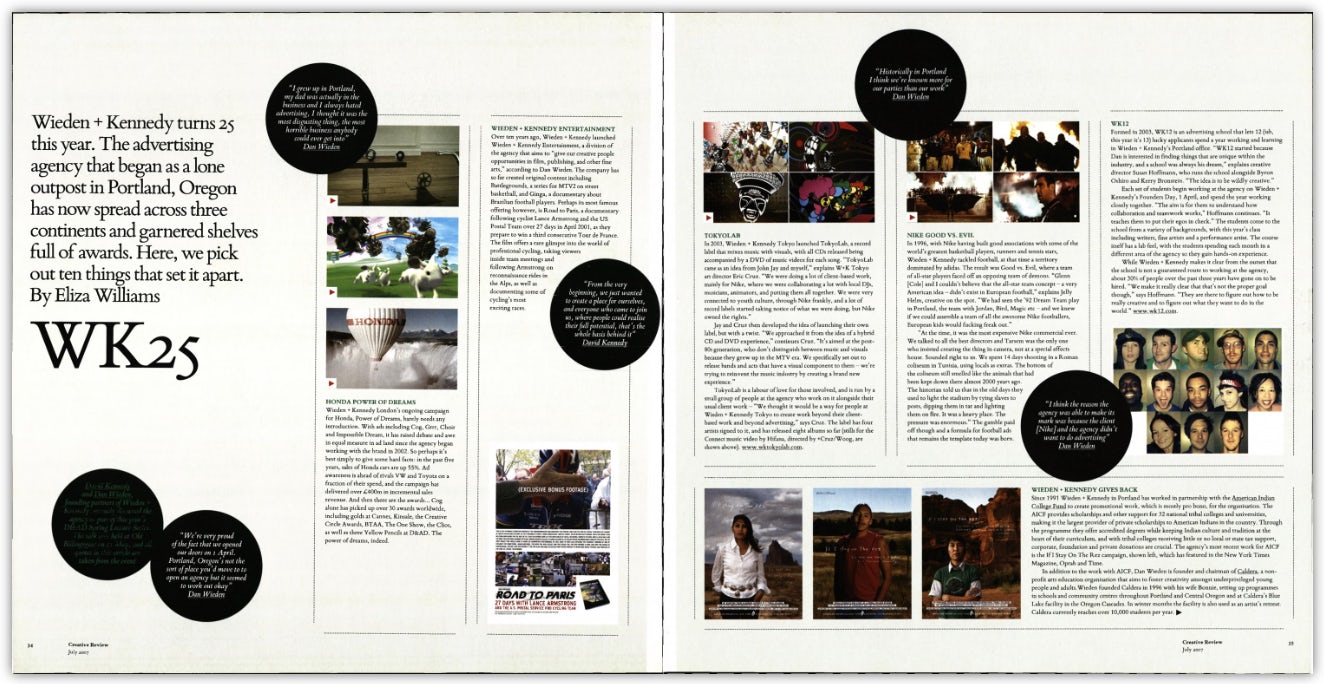 Wieden + Kennedy was launched by Dan Wieden and David Kennedy in Portland on April Fool’s Day, 1982. Eliza’s piece tells that story, as well as the stories of the agency’s offices around the world, including those in Delhi and Shanghai.

It wasn’t the first time we had looked at what makes W+K tick: in July 07 we took the opportunity of its 25th anniversary to look at ten things that set the agency apart (see above).

Earlier, back in May 95, we looked at the impact the agency was having in Amsterdam, while in July 2016, Iain Tait told us about changes that the London office was making to improve work/life balance and how the role of ECD is developing (below). 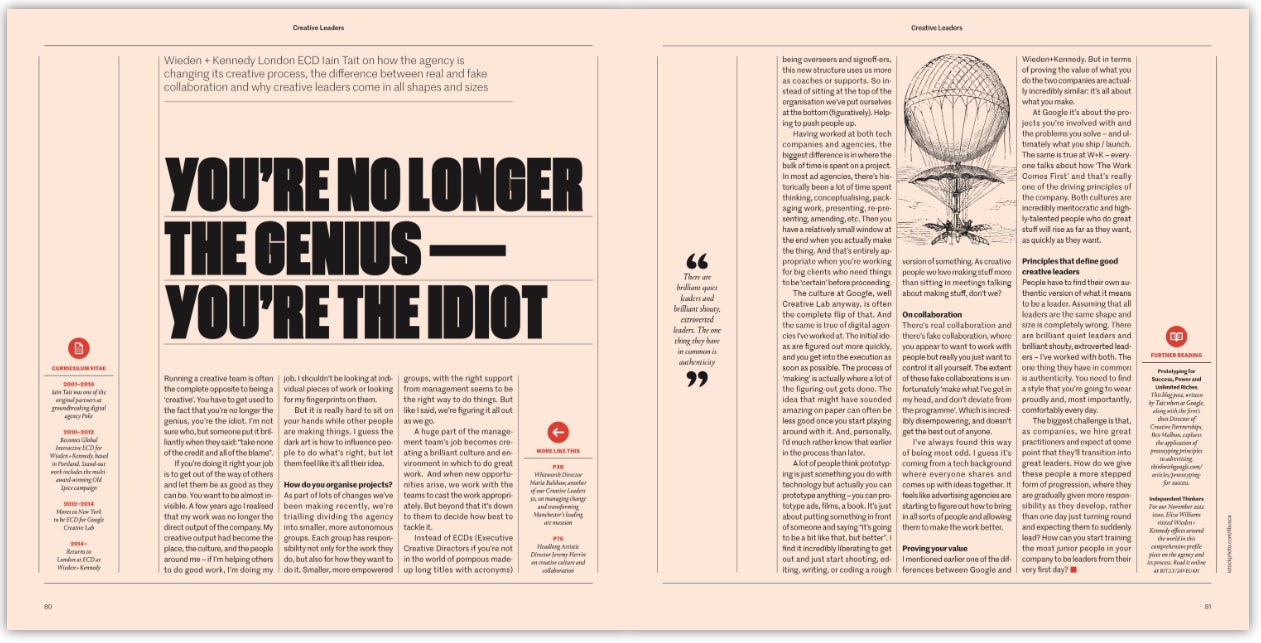 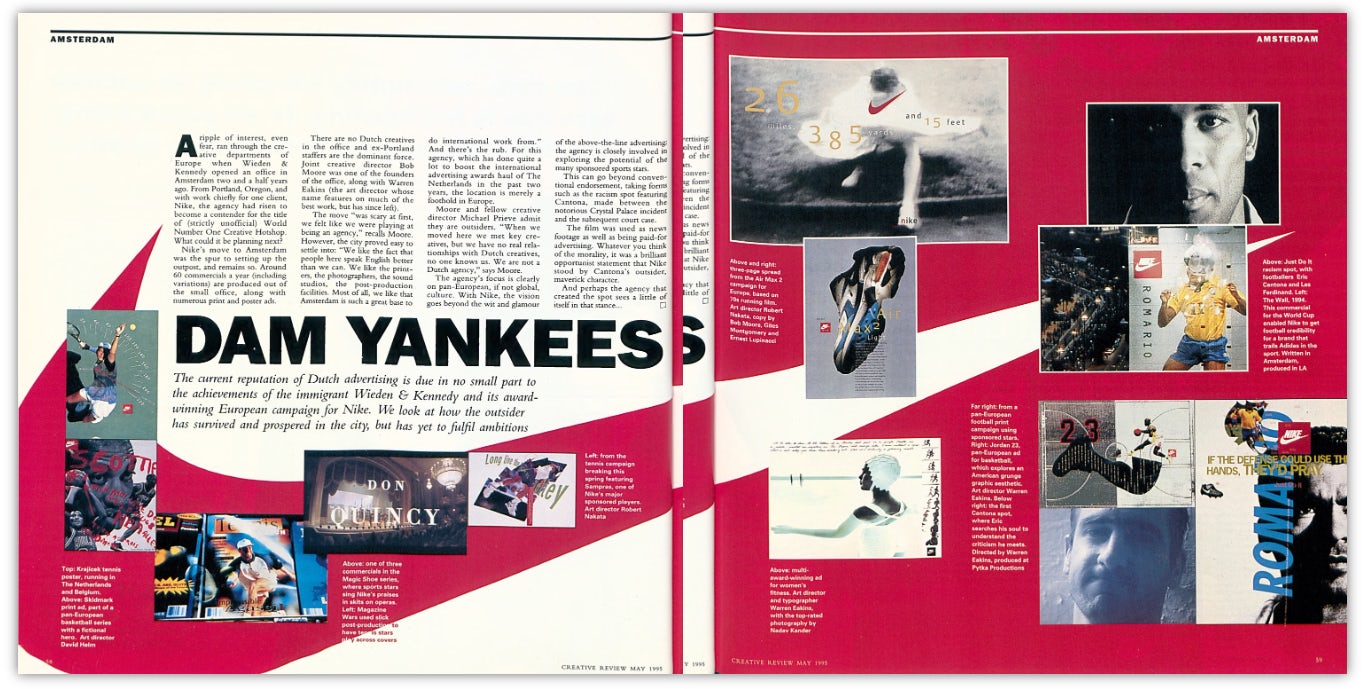 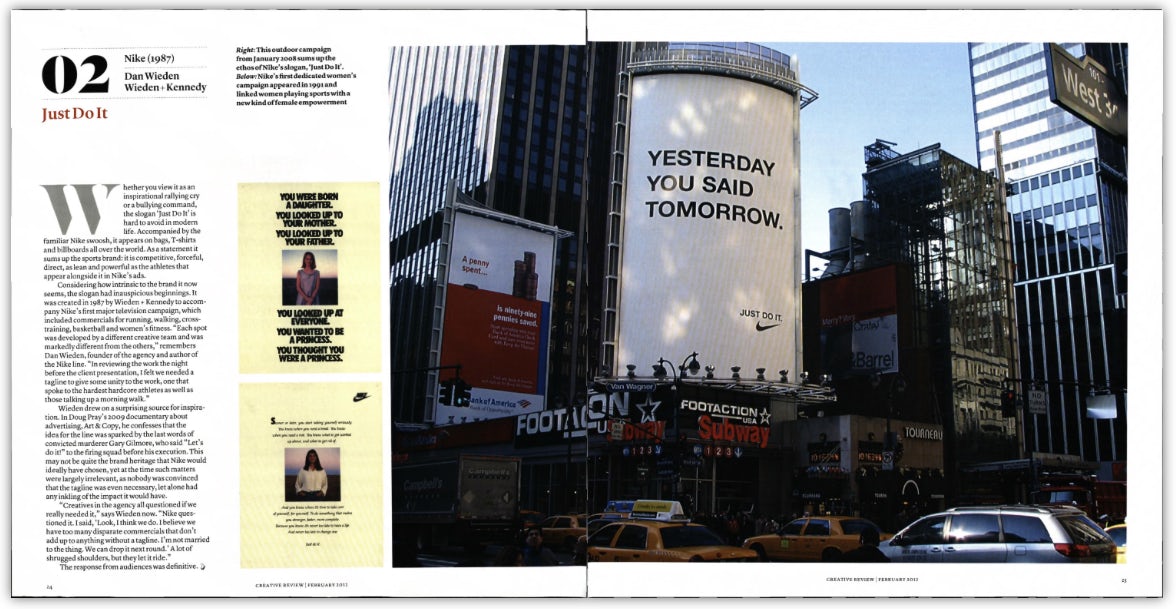 Think of W+K and inevitably Nike will follow: it was the agency’s first client after all. In our February 2012 Slogans issue, we explained how that famous line came in to being. And in this post, we rounded up much of the great Nike work to have appeared in CR over the years.

Perhaps second only to Nike – certainly in the UK – is W+K’s work for Honda. Grrr, Choir and Cog swept the awards shows in the first decade of the new century (Grr won two Black Pencils at D&AD in 2005). But where Honda is concerned, CR’s role has not been just to praise the work. In June 2003 we interviewed artists Fischli and Weiss about alleged similarities between their film Der Laufe Der Dinge and Cog and their threats to sue over it. 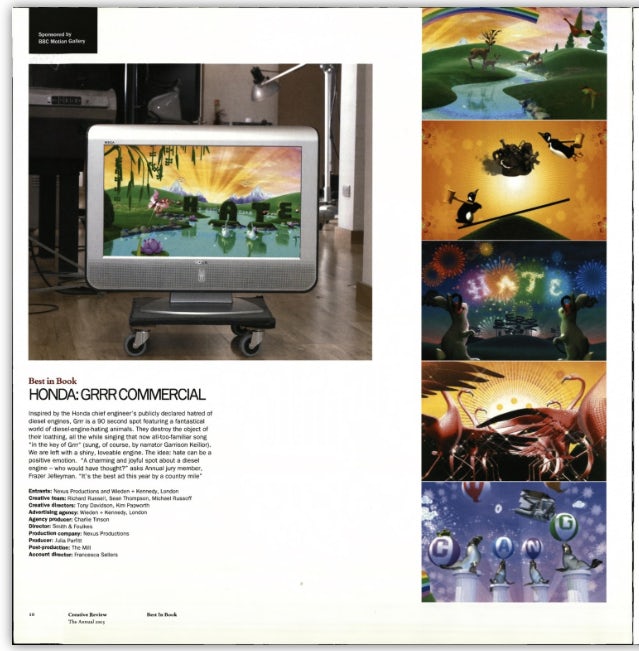 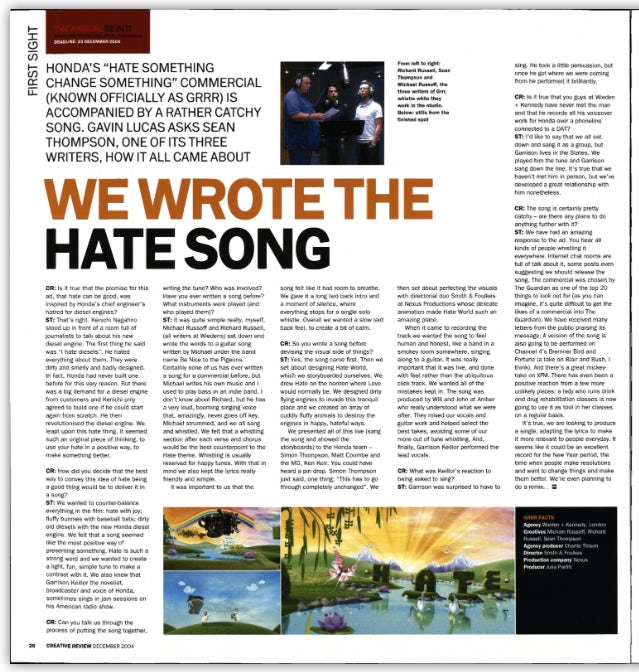 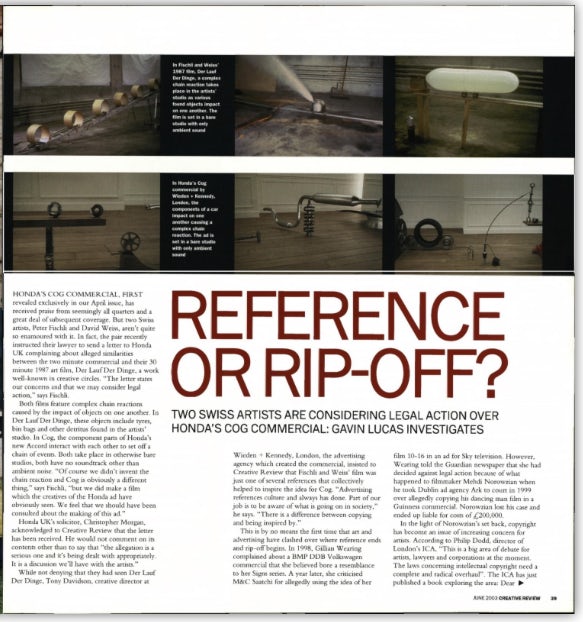 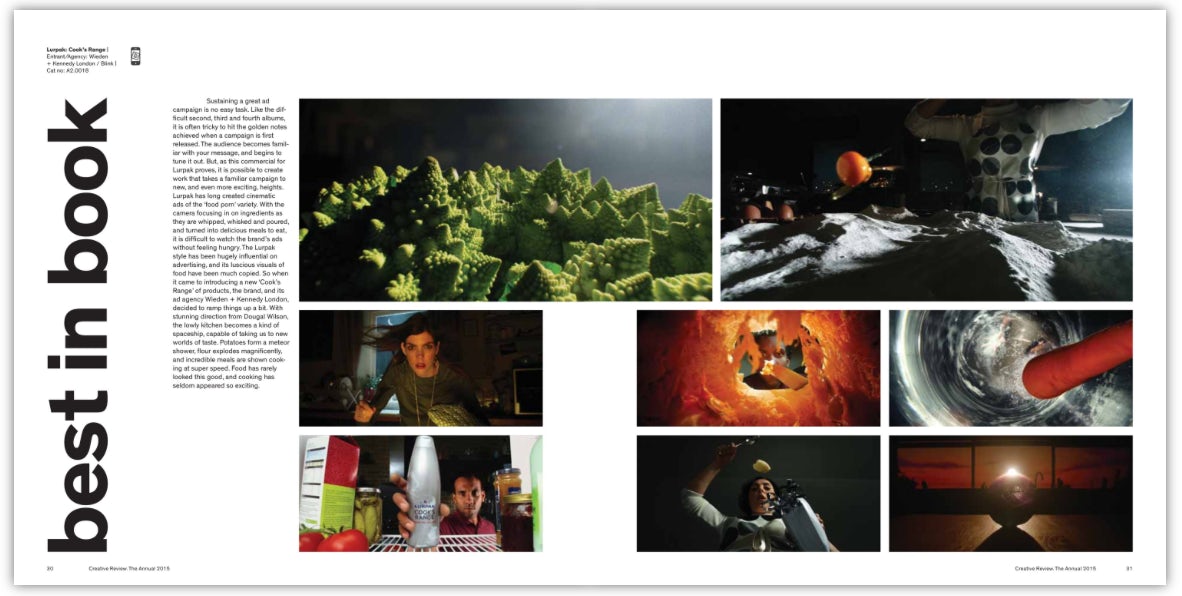 Through the CR Annual and Photography Annual, we have also featured W+K work for Coke, Lurpak and more. And that’s just in print.

CR subscribers can read all these pieces via our archive, containing 448 issues from 1980 to 2018, full details here.

Available now to all our subscribers, the CR archive features every issue of the magazine from 1980 to now. It’s a treasure trove of creativity featuring the most significant work and brands from the past four decades. Access it here