Unless you’ve been living under a rock for the last few years, you’ll know that it has been a particularly turbulent time for the world of politics. While the 90s are generally considered to be the decade of peace and prosperity, the 21st century has so far witnessed the birth of the ‘war on terror’, a financial crisis with global consequences, the re-emergence of nationalist politics (which in turn led to the election of a certain orange-hued TV personality as POTUS) and – who could forget – the thorny issue of Brexit.

In short, it’s hard to ignore the impact of politics on our daily lives these days, and this is reflected by a more politically engaged – albeit increasingly divided – general public. The 2017 UK general election saw 46.8 million people register to vote: the largest ever electorate for a UK-wide poll, according to the Electoral Commission. Delve a little deeper though, and the picture is more nuanced than it might seem. While the youth vote has gradually been on the rise over the course of the past decade, 18-24 year olds still only made up 10% of all votes in 2017, compared to the over-65 age group, who made up 25%. 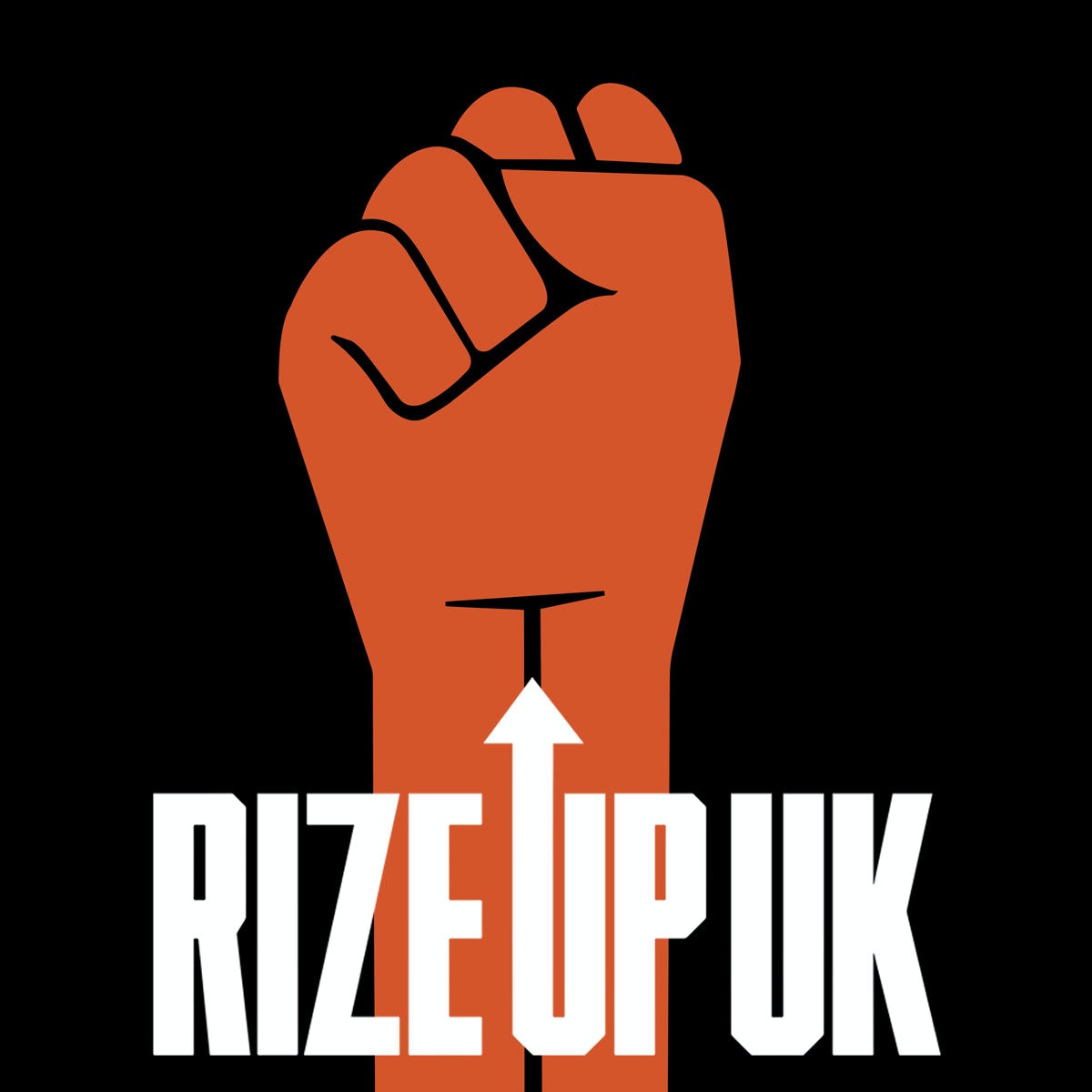 This imbalance is what spurred on photographer and filmmaker Josh Cole to found RizeUp, a non-partisan movement that encourages people who have traditionally been branded as ‘non-voters’ to register, in order to make their mark on the policies that will impact how they go about their everyday lives. Having long felt frustrated by the way that this demographic is neglected by mainstream parties, Cole says he finally decided to set up the movement after reading a statistic that 15 million people didn’t vote in the 2015 election – primarily the homeless, the under-25s and the economically dispossessed.

“All my work is about making a bridge between the underclasses and the rest of society, and I come from that sort of background myself, so it’s always been a passion of mine to empower people from poorer backgrounds and bring them back into mainstream society. I realised that the other campaigns out there are mainly aimed at students and weren’t really relevant to poorer kids; they were a very white, middle-class voice,” he adds. 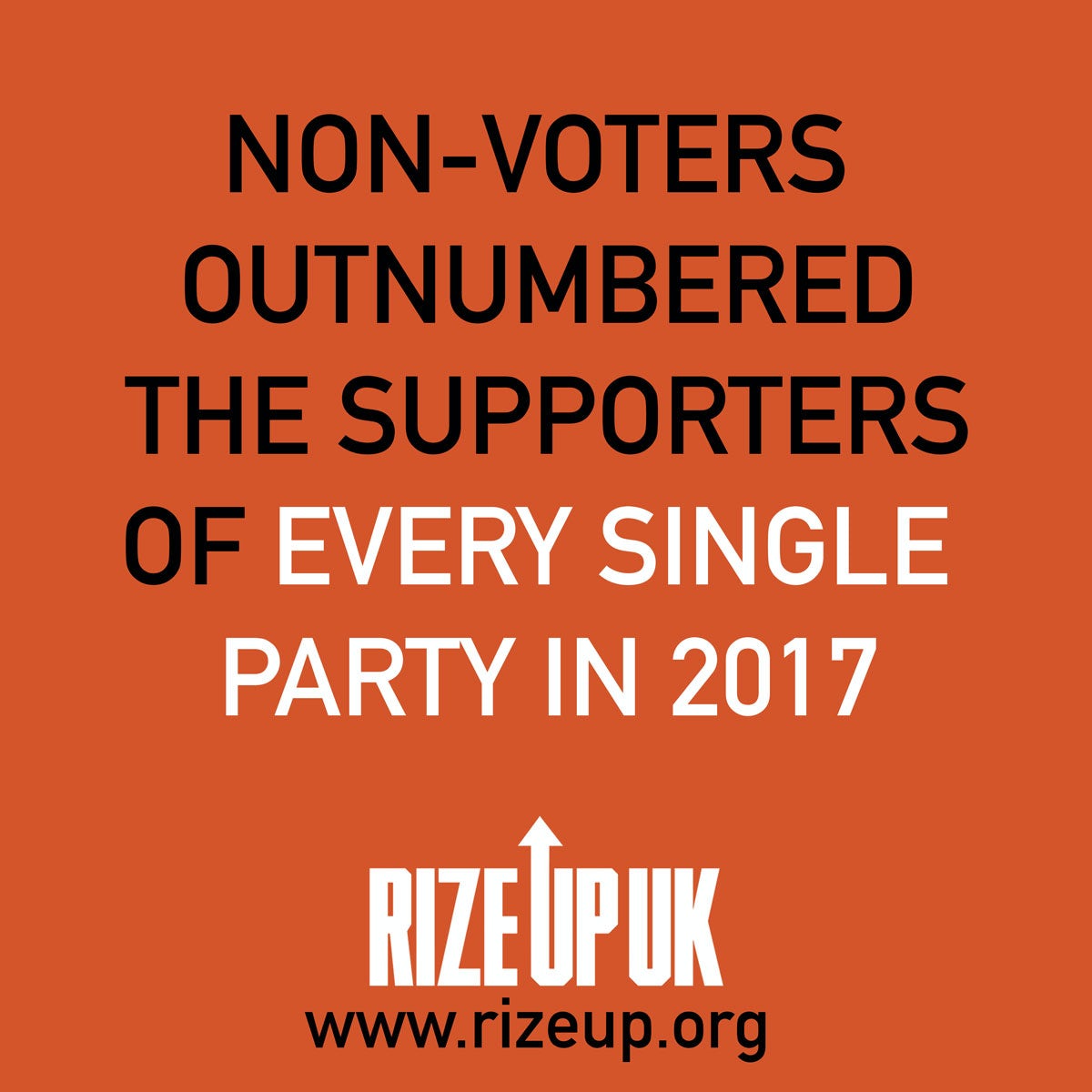 When former Prime Minister Theresa May called a surprise general election in 2017, Cole admits he “wasn’t even slightly ready” but went ahead with the launch anyway, pulling the whole campaign together in just seven weeks. In its first 48 hours, London-based Studio Output became campaign HQ, as the team created a visual language that would help get the movement’s core message across to potential voters. This centred around a distinctive fist symbol, a contrasting orange and black colour palette, and the slogan: They don’t expect us to vote.

Social became one of RizeUp’s key outlets in 2017; famous faces including Professor Green and Lily Allen endorsed the campaign on their Twitter and Instagram pages, while rappers Big Narstie and Tommy Jules released a specially written track, We Need a Change, on YouTube under the pseudonym Rize Up Sound System. Despite being run on a shoestring and pulled together in such a short amount of time, the campaign proved to play an important part in the 16% boost in voter turnout among under-25s compared to 2015, which marked a 25-year high.

Following another two years of Brexit deadlock misery, the public is set to go to the polls again this month, in an election that is likely to define the course of British politics for decades to come. With the financial backing of non-proft 38 Degrees and famously activist beauty retailer Lush, which has turned its stores across the country into campaign information centres and allowed homeless people to register to vote using the store address, Cole says he feels better prepared to do battle this time around.

While other youth-focused groups such as Grime4Corbyn and Fck Boris are unashamedly partisan in their campaigning to reflect the fact that more young people are likely to be left-leaning, and Cole himself has made several films for Labour since Jeremy Corbyn became leader, he is keen that RizeUp should stick to its party-neutral roots in order to maintain its core message of inclusivity. 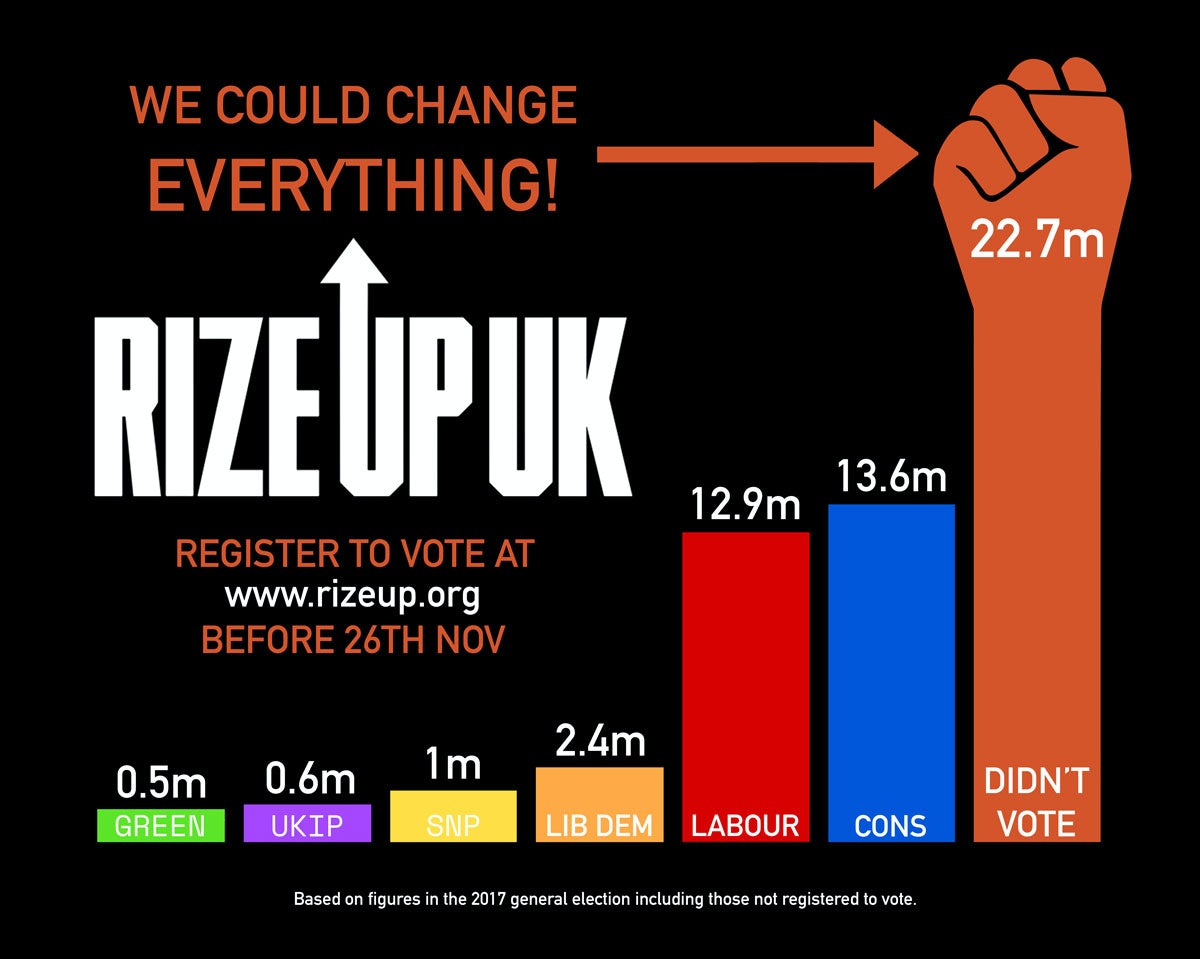 “I just felt like young people don’t really want to be told how to vote, it’s patronising to do that. We’re really encouraging people to do their own research and look into this stuff. All of our ambassadors are generally first-time voters or are not passionate about politics and that’s also quite important to me, that it’s not too clever and we’re doing it together,” says Cole.

The same goes for the movement’s celeb ambassadors; they include rapper and first-time voter Lady Leshurr and musician Vic Santoro, who recently appeared in Rapman’s hard-hitting film about gang violence, Blue Story. Rather than shooting campaign films himself this time, Cole has also handed over the reins to a number of younger directors who have a direct connection to the communities that they’re speaking to. “[It’s about] trying to get these conversations going with young people, trying to understand why they don’t vote, trying to show why we think they should … [and] connecting street politics with democracy,” he adds.

Despite not having done graphic design properly since school, Cole has also done pretty much all of the flyers himself this time around, building on Studio Output’s original visual identity. “I wanted to keep it quite raw and not too polished,” he explains. “I think that’s more relevant to the audience and it doesn’t seem like it’s had loads of money spent on it. Even with the Big Narstie video [in 2017], I did it on a small budget but I was pulling in loads of favours from DPs. I think on reflection with those kind of things, it just feels a bit too smart, it feels a bit too much like advertising.”

In an interesting move for a campaign targeting the ‘social media generation’, the team has also been putting time and money into what would traditionally be seen as old school methods of political campaigning. It’s financed 30 street teams of young people from youth centres across the country to have face-to-face conversations with their peers about why it’s important to vote, mobilised a further 20 teams of young people in universities, and staged guerrilla events such as a music-themed takeover of Parliament Square in Leeds.

So far, RizeUp’s tactics seem to have paid off. Roughly 3.85 million people registered to vote before the November 26 deadline, 37% of which were under 25. “I don’t think we’re solely responsible for the boost in numbers but I’m sure it’s had an influence,” says Cole. “I think feet on the street is really good, I think getting a leaflet in your hand like the ones we’ve done is really effective as well.”

Cole’s work is not quite done yet, however. He still has to make sure that the oft-neglected voices who registered to vote in the election actually make it to the polling stations come December 12. His message to those people? “If there’s lots of young, poor kids that don’t vote then young, poor kids will get ignored by policies going forward,” he says. “You’re only making a statement by joining numbers. It’s a collective effort to change the country, we can’t do it on our own, so we have to join together en masse to make a difference.” 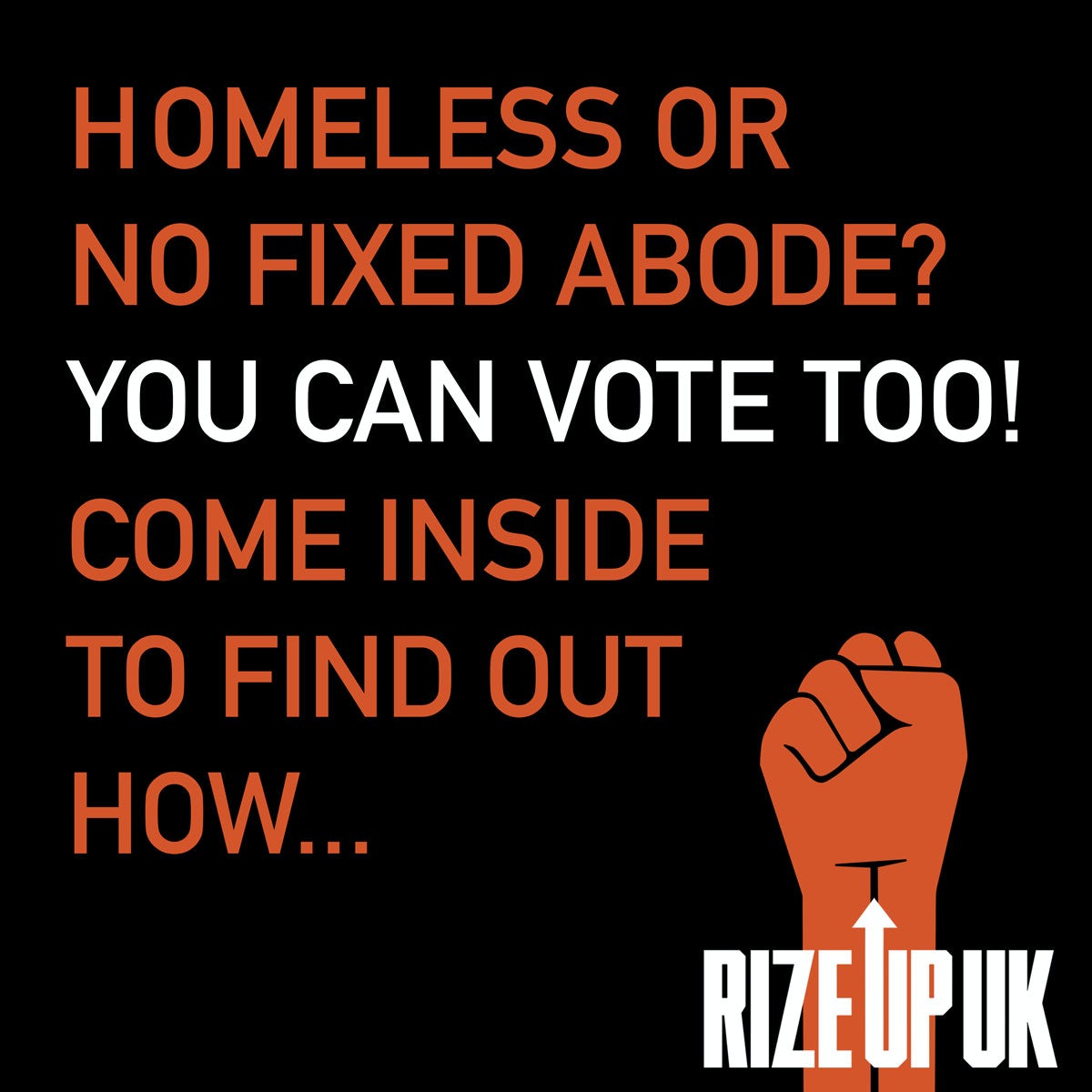 Find out more about how to vote on December 12 at gov.uk; rizeup.org