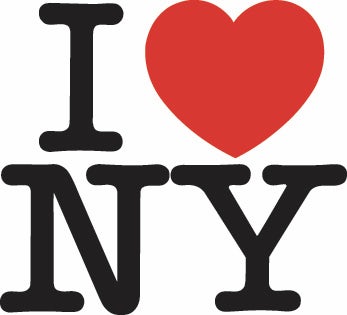 The I love NY logo is so ubiquitous in New York today that it feels hard to imagine it actually being designed. Surely it has always been there, offering New Yorkers and tourists the chance to proclaim their love for the city? In fact, the symbol was born in the mid-70s as part of an advertising campaign commissioned by New York State to increase tourism and also raise the spirits of the residents of New York during a particularly difficult period in the state’s history, when crime rates in New York City were at an all time high and the state was close to bankruptcy. To help counteract this dire image, an advertising agency, Wells Rich Greene, came up with a marketing campaign that was centred on the slogan I Love New York. The campaign needed a logo, so William S Doyle, then deputy commissioner of commerce for New York State, approached renowned designer Milton Glaser.

Glaser had already found fame for work he’d been producing with Push Pin Studios, which he co-founded in New York in 1954, including his psychedelic poster for Bob Dylan’s Greatest Hits album from 1966, and the masthead for New York magazine from 1968. He had recently left Push Pin and set up his own studio in New York when he was approached by Doyle to design the logo for the campaign (there are differing dates for when exactly the logo was commissioned, with Glaser stating 1975, while other sources say it was designed in 1977 after the looting that occurred during a blackout in the city, which was seen as the decade’s lowest moment). Glaser spent about a week working on an initial design. “What was needed to begin the process was a visual equivalent for the words,” he wrote of the design in his book Art Is Work, which was published by The Overlook Press in 2000. “I produced a typographic solution, submitted it, and it was approved. A week later, I was doodling in a cab and another idea suggested itself. I called Doyle and said, ‘I have a better idea’. ‘Forget it,’ he said, ‘do you know how complicated it would be to get everyone together to approve it again?’ ‘Let me show it to you,’ I implored. He came down to the office, nodded, took away the new sketch, called a meeting and had it approved.” 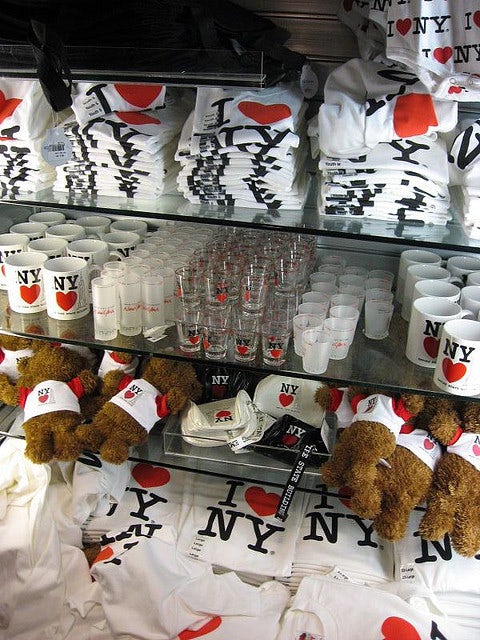 This second version was I♥ NY, which Glaser acknowledges now was designed in “about ten seconds”. “I suspect that the original imagery derived from my memories of carvings in tree trunks,” he says, “where the initials of lovers were combined with a heart, frequently pierced by an arrow to indicate one’s deepest affection. I decided to eliminate the arrow. Curiously, the exact sequence of information had rarely, if ever, been expressed in the way the final logo materialised.” Glaser used a variation of the font American Typewriter for the letters in the logo. “I am not sure why I chose the variation of American Typewriter, except for its informality and literary reference and the fact that it was a rigid counterpoint to the voluptuous heart made it seem appropriate,” he says. 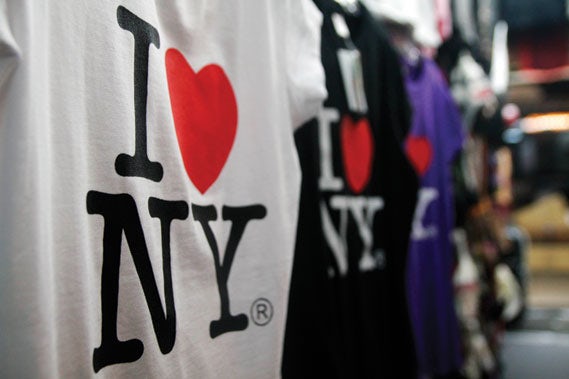 Despite its humble origins, I ♥ NY has become an iconic symbol for New York, and the logo’s simple construction has since been used to express love for many other destinations around the world too. Glaser himself has seen no financial return for its success, however, as he designed the logo pro bono. Looking back on its longevity now, he expresses some surprise. “No one could have had any idea how significant the logo would become, certainly not me,” he says. “It is amazing to me that it has not vanished, that it is still impactful, that people still respond to it, and it still seems to do its basic job. Perhaps the most remarkable thing about it is not its origins, but its persistence.”