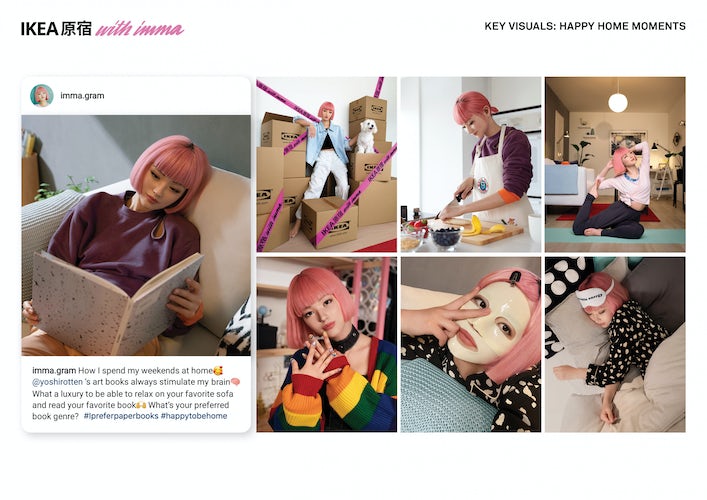 In Japan, the home has always been a functional place. This is particularly true for young people in Tokyo, as most live in tiny one-bedroom or studio apartments. To inspire this audience to think differently about their home environment, Ikea placed the Japanese virtual model, Imma, into a physical home for the first time. For 72 hours, Imma’s home was set over two floors in Ikea’s new Harajuku shop, and passersby could watch her do yoga and dance, as well as perform mundane tasks.

The set featured LED screens that allowed Ikea to bring Imma into the space, with the colour of the LED panels adapting to the real world in real time by using light meters to track the daylight and weather. Imma’s home was shoppable too, with her exclusive product range available to buy online or in store.

Those who couldn’t visit the real window in Harajuku could tune into Imma’s life via a 72-hour livestream on Ikea Japan’s YouTube channel. Or, of course, they could follow Imma’s updates from her time inside the store on her social channels.

Imma’s first home made the news in media outlets worldwide, and the activation weekend gave Ikea Harajuku its highest number of visitors to date.