As small and cheaply produced pieces of print, postcards were easily smuggled from person to person, allowing subversive ideas to be shared among a population that was largely illiterate.

“For a short time, postcards became the ultimate visual representatives of the era, charged with bringing down the old and building up the new,” says author Tobie Mathew, whose own collection of postcards is featured in the book, entitled Greetings from The Barricades: Revolutionary Postcards in Imperial Russia. “In their imagery, the welfare of the nation was placed at centre stage, the lives and rights of the people made a crucial matter, just as relevant to the historical record as art and autocracy.”

Often, revolutionary groups used the sale of postcards to help fund their activities, but artists, illustrators, photographers, publishers, photographic studios and bookshops were all involved in the business – often using overlapping imagery. Photomechanic or typographic images were the cheapest to produce, while chromolithographic postcards were at the higher end.

Publishers frequently had to counter government censorship. The local police could ‘arrest’ an entire print run if it was deemed seditious, meaning printers would often move postcards off site quickly, or leave behind a token few hundred for authorities to claim. As postcards soared in popularity – Mathew reports there were 91 million sent by post in 1900, which jumped to 337 million in 1906 – specially assigned committees worked day and night to process stacks of confiscated cards.

Printers, artists and political groups used various methods to sidestep censorship including drawing directly on postcard blanks, avoiding registered printing houses, or using careful satire that didn’t directly point its finger at the government. Imagery ranged from swaying Russians’ opinions on workers’ downtrodden place in society and portraying the famine in south-eastern Russia (shown as an ogre looming over the countryside), to more challenging subjects, such as photographs of Jewish pogroms, and images of the Bloody Sunday protest of 1905, when guards opened fire on unarmed demonstrators.

As well as the threat of censorship, artists could land themselves in legal trouble if their drawings were too seditious. Caricaturing the Tsar was considered especially dangerous – carrying a punishment of eight years penal servitude – but images did emerge, printed underground by revolutionary groups. In one case he’s shown being spanked by a Japanese soldier, and in another depicted as a wailing toddler.

“Once the preserve of the law-abiding town dweller, they were transformed during this period into political message-bearers, spreading stories of oppression and heralding the change that many hoped might one day be upon them,” writes Mathew. “Long before the advent of television and the internet, postcards were a potent form of mass communication, transmitting ideas of opposition across the Russian Empire.”

Greetings From The Barricades is fascinating not just for its collection of striking imagery, but for the way it demonstrates the subversive power of print – something that can feel sadly lacking today. As Mathew notes, while revolutionaries saw postcards as cheap and easy methods of getting their point across, they represented something more significant for the wider population – “they brought the popular voice within earshot of the regime”. 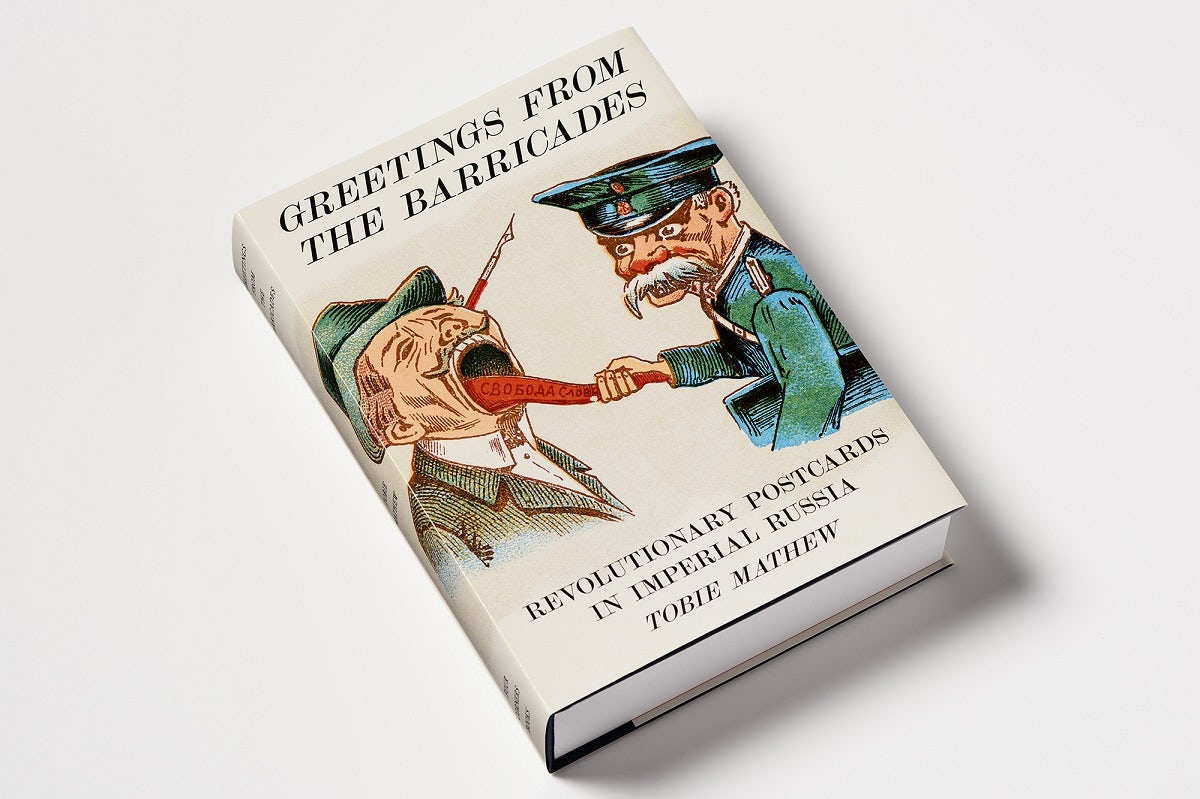 Greetings From the Barricades: Revolutionary Postcards in Imperial Russia is published by Four Corners