Sixty-feet in length, the bench acts an interface for a large projection screen installed in the park, which reflects the movements of those who skate, run or sit on it with waves of colour.

The bench is created by AATOAA, aka Vincent Morisset and Caroline Robert, the team behind brilliant interactive artworks including Way To Go and BLA BLA, as well as a number of digital projects for Arcade Fire. Their work is characterised by mixing tactile ‘real world’ art, such as painting and illustration, with high-end interactive techniques. This can be seen again in Bench, which features watercolours by Robert as part of the effects created by the park visitors’ movements. 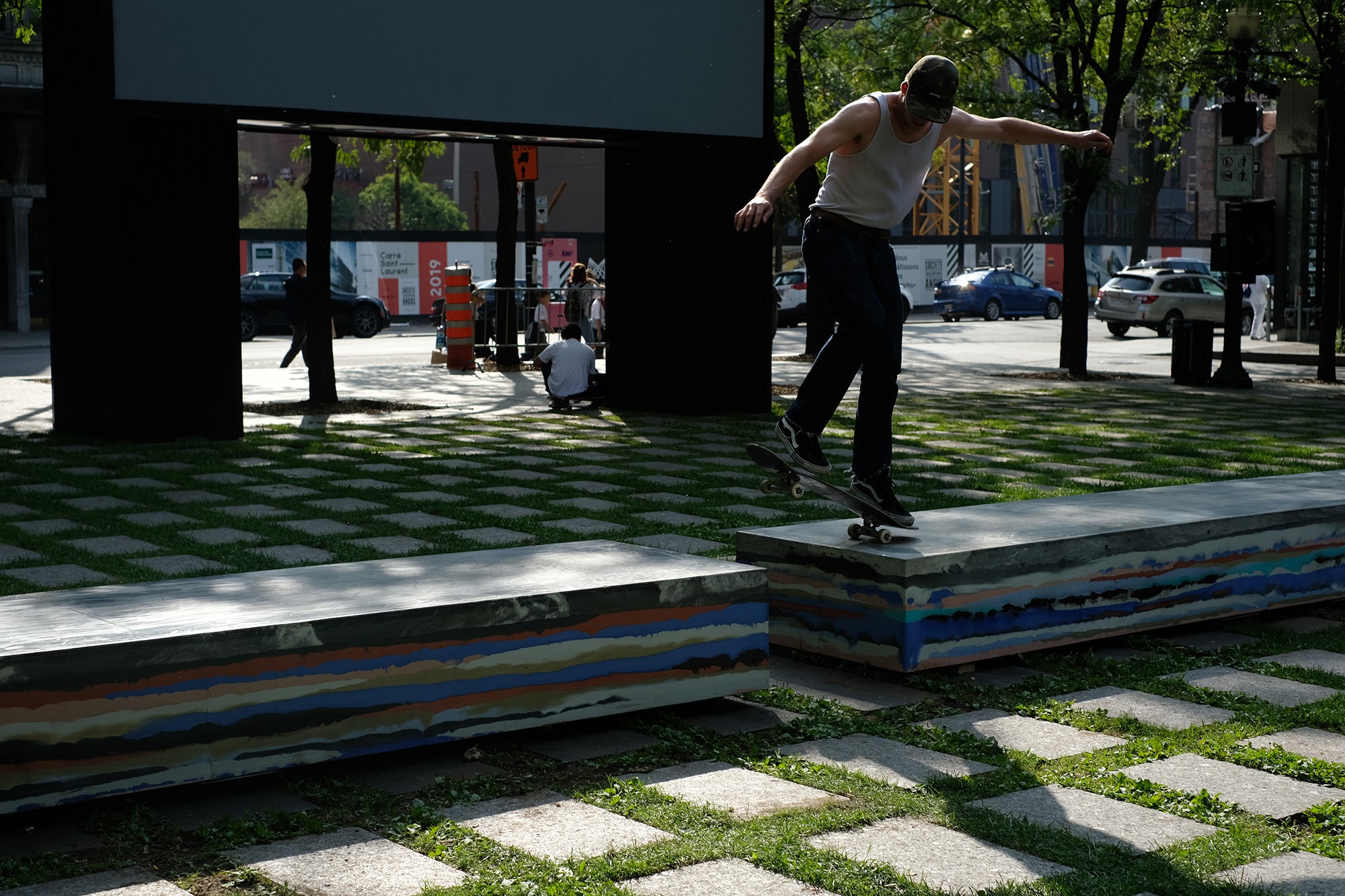 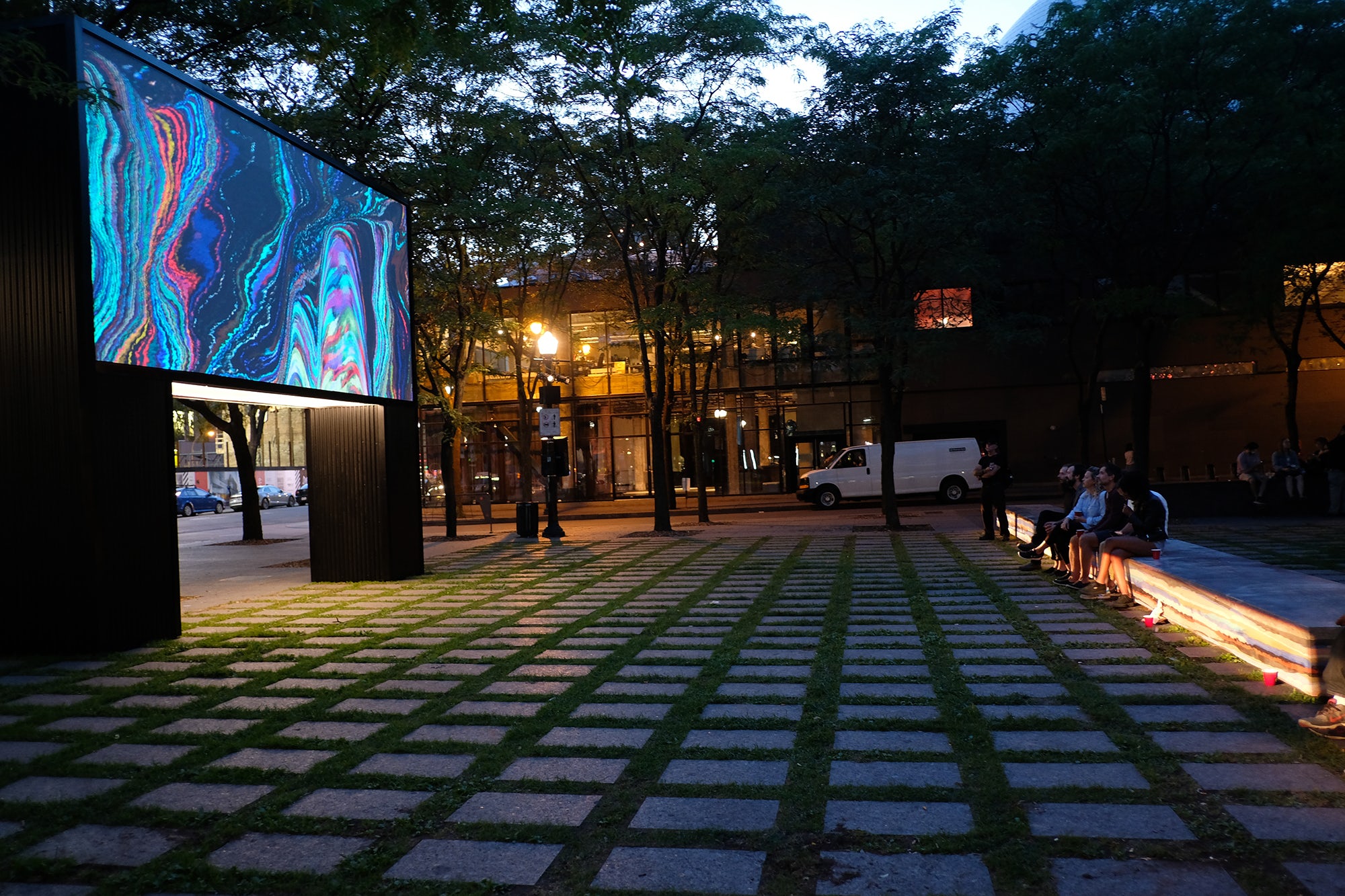 “An industrial laser scanner, placed at the back of the park, tracks the position and movement of people on the bench,” says Morisset of how it works. “We then transform those presences into ‘geological inspired dynamics’. People become forces that shift tectonic plates. Like a balance, if more people are on one side, the flow moves that way. If two people get closer, they get stronger. If a skater slides from one end to the other, it wipes out the existing patterns.

“The experience is ever-changing, passing from minimalist patterns to intense dynamics. The colour patterns are made by ‘digesting’ pictures taken at the Peace Park and its surroundings and also watercolours painted by Caroline depicting encounters between entities. They are pushed in layers through particles in movement, triggered and controlled by the presence of visitors.” 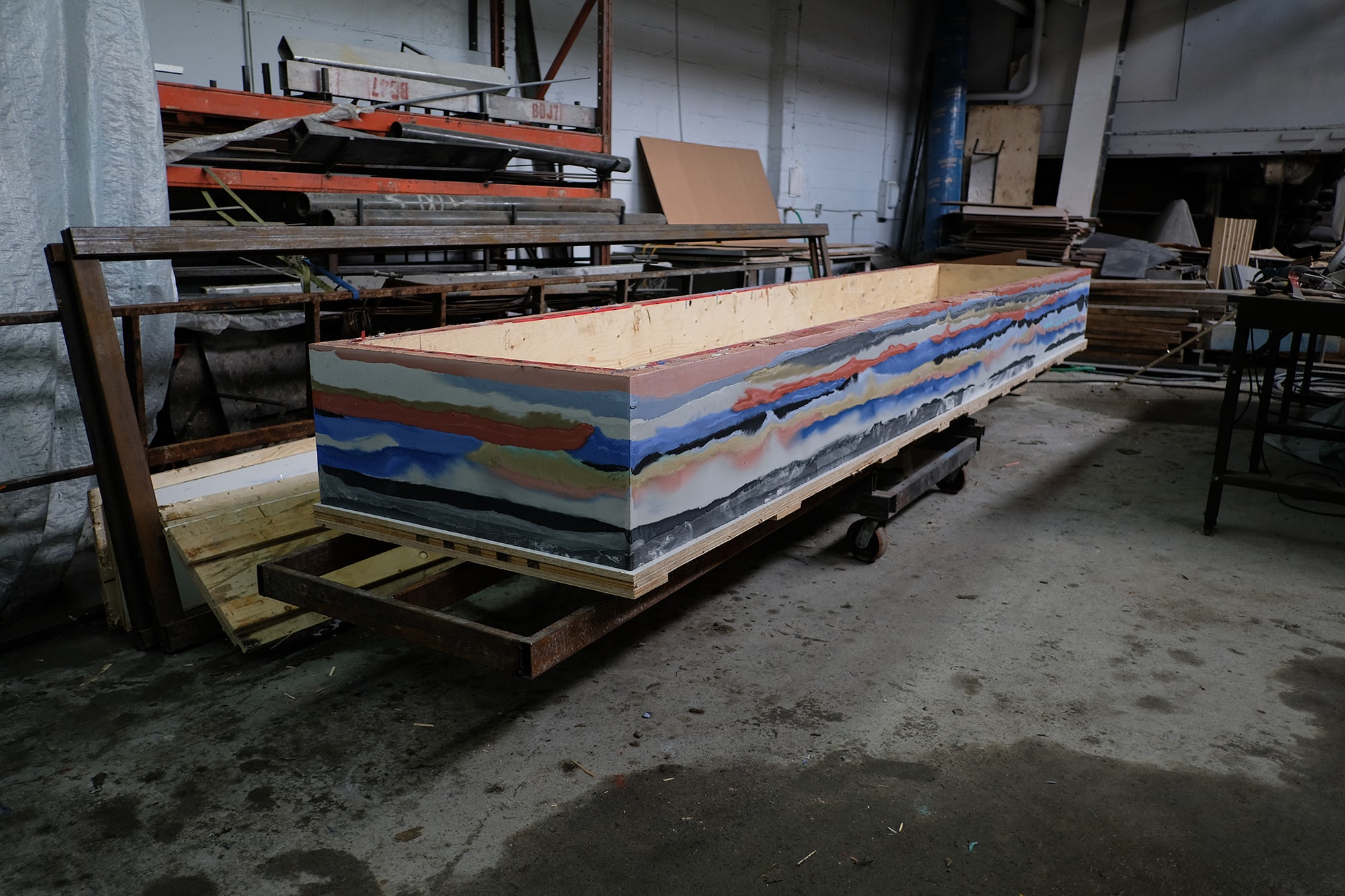 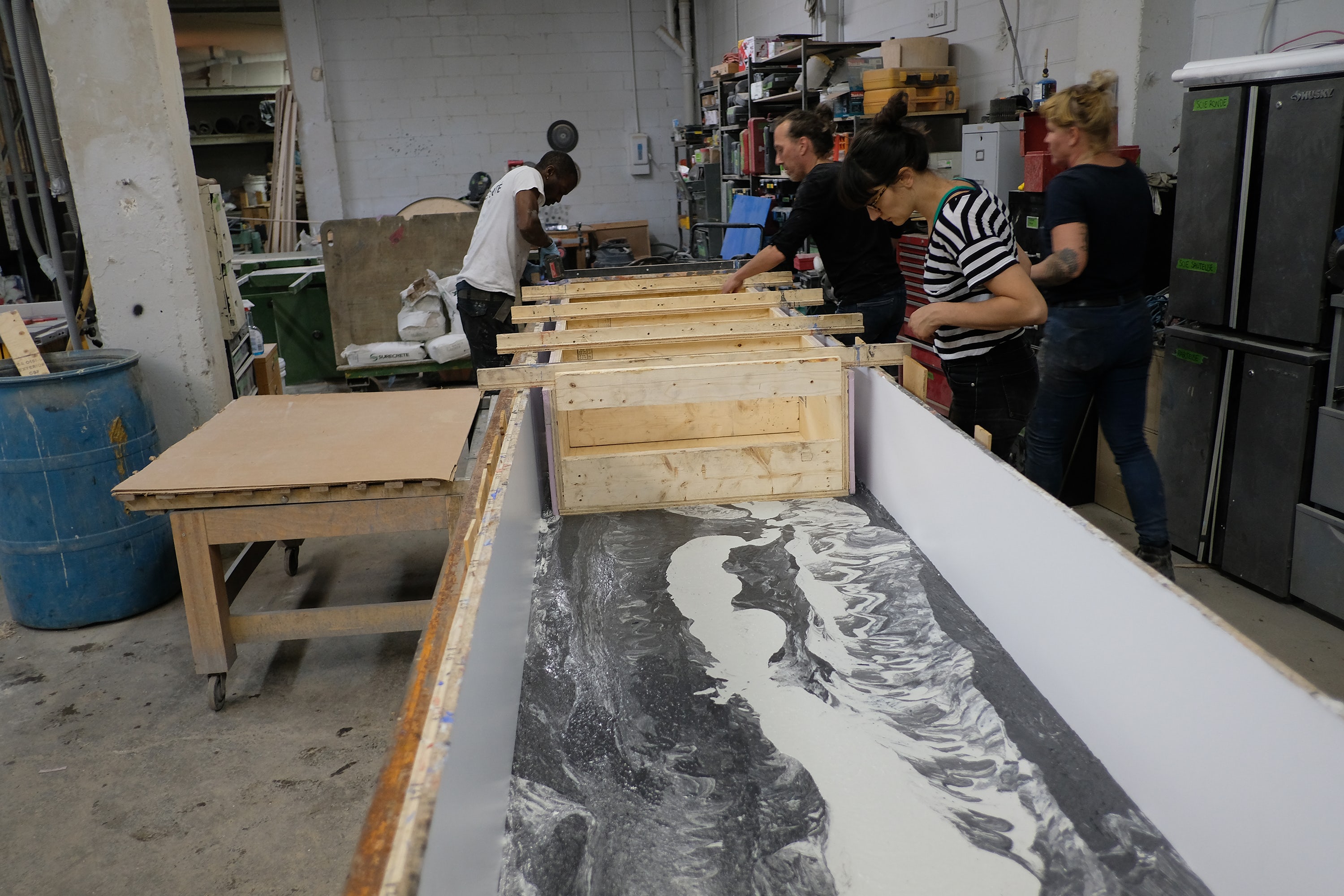 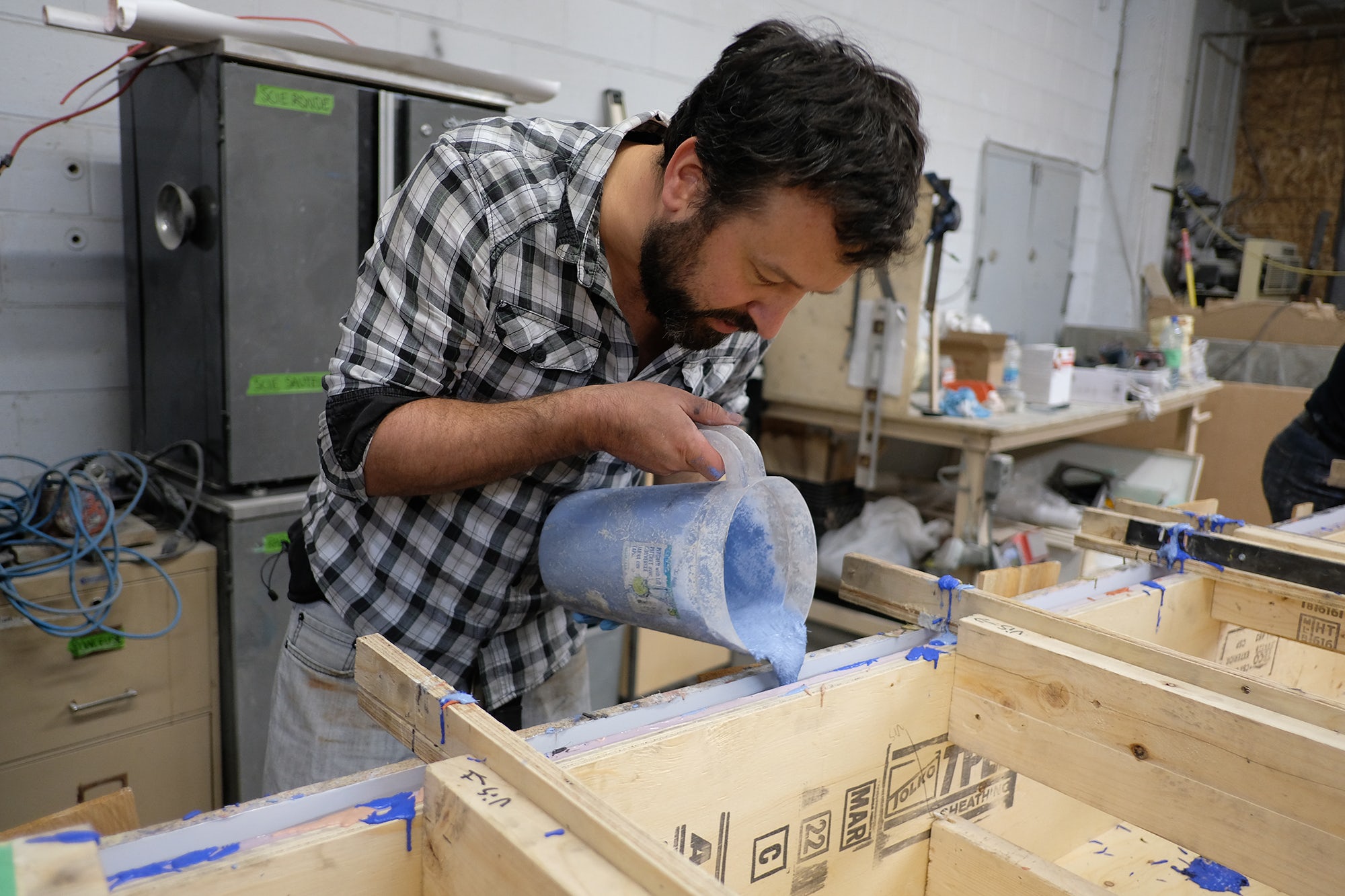 The project was originally installed as part of KM3, a public art exhibition, though the city of Montreal has now decided that the concrete structure should remain as a permanent feature. “That was a great victory for us,” says Morisset. “We are already seeing that the bench is changing the dynamics in the park. More and more visitors stop by to eat their lunch or just to rest and watch the action on the main street.

“The Peace Park is a street skate mecca in Montreal and also a place where homeless people rest,” Morisset continues. “It is in the centre of the city. It used to be the Red Light district, but in the recent years, the neighbourhood has changed, with office towers and condos are being built rapidly. We tried to make a project that took into consideration its regulars. Something that made a statement on the transformation of the place but also something that could be useful.”