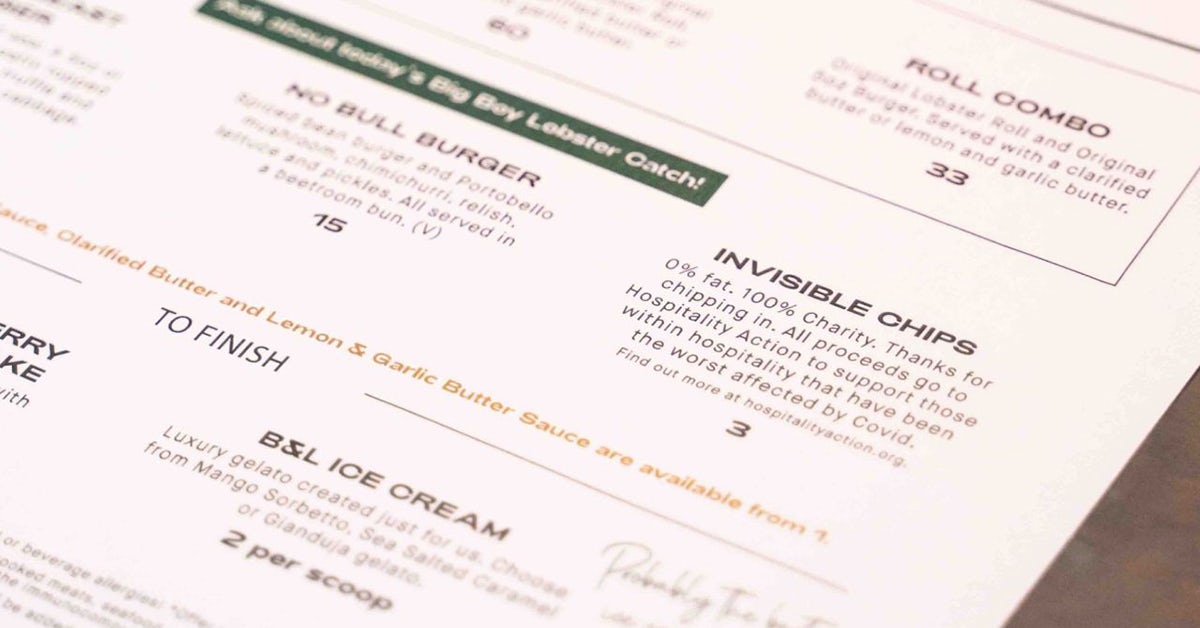 Following an August of eating out to help out, the UK government has announced new restrictions on pubs, bars and restaurants, including 10pm curfews across much of the UK, in a bid to curb the spread of Covid-19. The move will come as a renewed blow to the hospitality sector, which has been hit particularly hard during the coronavirus pandemic.

The fallout has seen Hospitality Action, a charity dedicated to the industry, look to fundraising routes that engage with the public, and in July it launched Invisible Chips – a initiative encouraging donations under the guise of a light-hearted menu add-on.

The concept was devised and led by creative director duo Dave Askwith and Rob Porteous, and was first introduced to the public in a campaign film starring First Dates maître d’ and TV presenter Fred Sirieix. 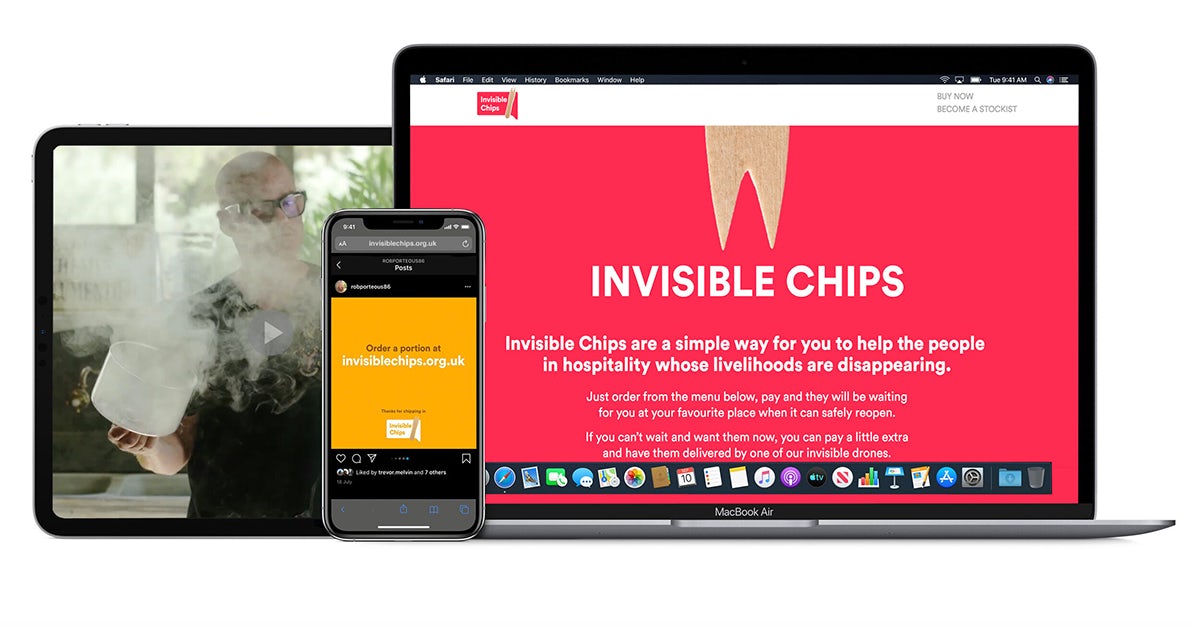 “The workers were the hardest hit and Hospitality Action were trying to cope with thousands of requests for help from the staff who had no work and no money, but still needed to pay bills and put food on their own tables,” explains Porteous.

Though Invisible Chips by their nature don’t exist in any physical, edible form, celebrity chef Heston Blumenthal demonstrates in another campaign film how to ‘prepare’ your own triple-cooked version at home, playfully visualised à la Heinz, and menus even detail the different varieties and nutritional information (‘0% fat. 100% charity’).

With the hospitality industry facing such difficult days it's time to share something special. The creator of the Triple-Cooked Chip believes now is the time to reveal the recipe of his latest masterpiece: Heston Blumenthal’s Triple-Cooked Invisible Chips. pic.twitter.com/pj1zHZ6JoQ

“Dave and myself always wanted to add in some invisible condiments and give the customer the option to have their Invisible Chips delivered by invisible drone, as this was a great way to generate more funds for the charity and also keep our customers smiling,” Porteous says.

People can donate to the cause online by paying for Invisible Chips, which are also available in bars and restaurants around the UK. They were first added to a physical menu at BrewDog – which also supports independent businesses in the hospitality sector through its Kickstart Collective – and they’re now ‘stocked’ at 250 venues including the Hilton Hotel as well as Burger and Lobster, Hawksmoor, and Gaucho restaurants. While fundraising figures aren’t yet available, Hospitality Action has reported positive responses from customers as well as hospitality workers benefitting from the initiative. 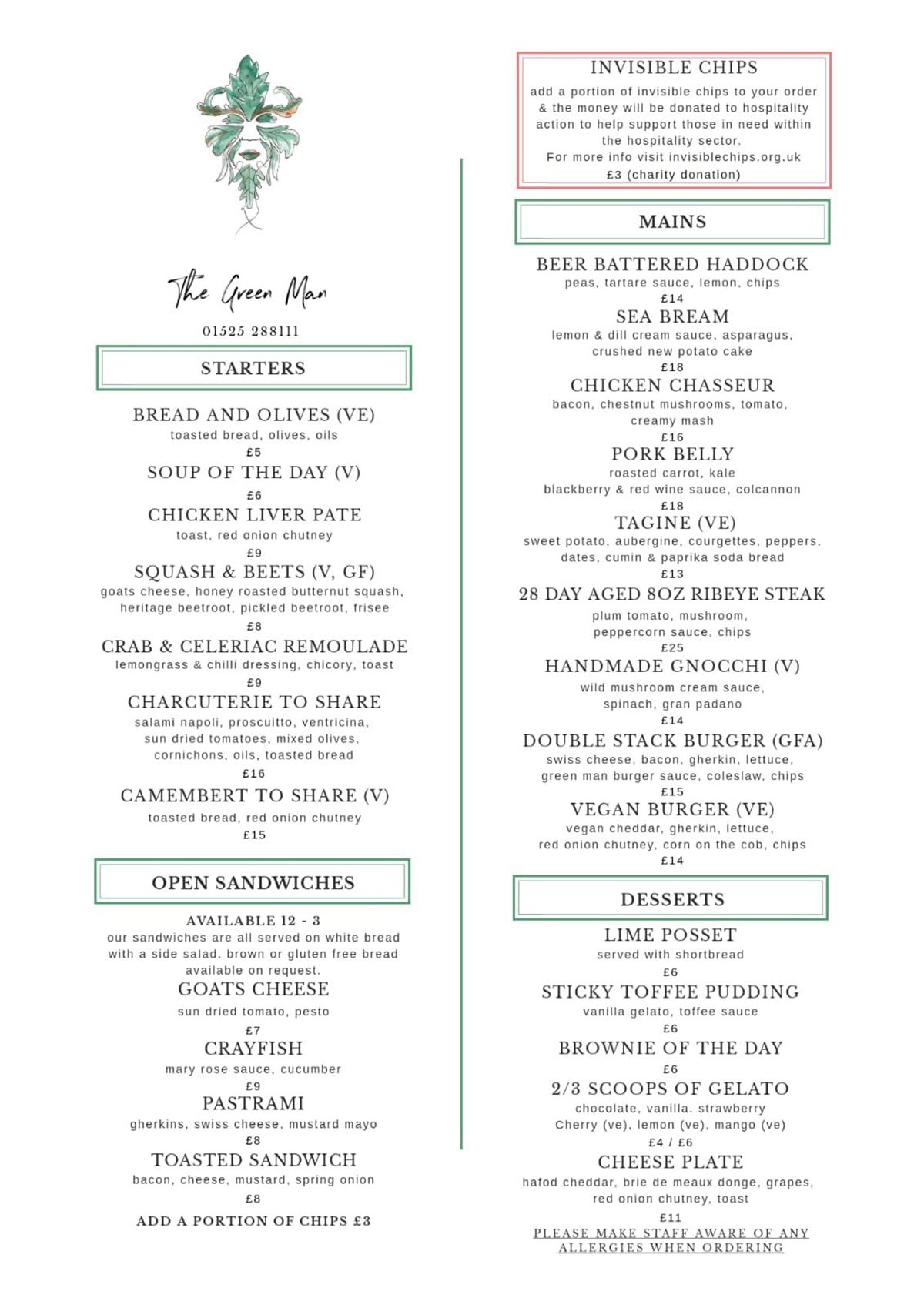 “We always knew that getting people to part with their cash in the current climate was going to be difficult,” Porteous says, “but we also knew that if the public had a smile on their face when we asked them, then we stood a better chance. And who doesn’t like chips?”