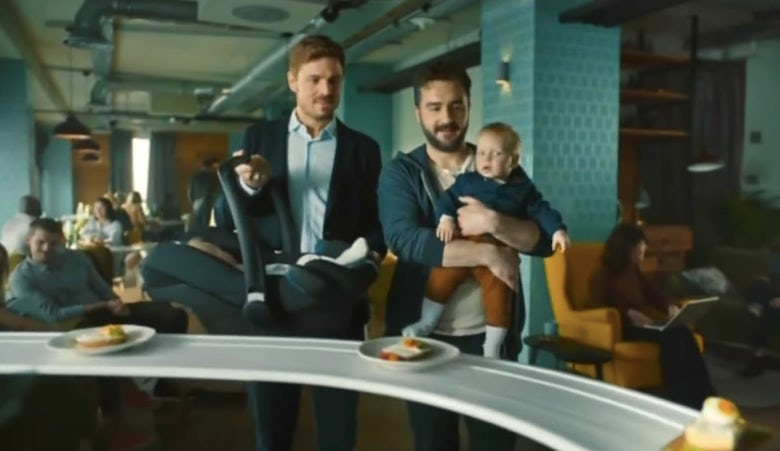 Earlier this week, the Advertising Standards Authority banned the first two ads it deemed to have broken its new rules on harmful gender stereotypes – which the watchdog began enforcing earlier this year.

One advert for Philadelphia – which showed a pair of haphazard dads too distracted by cream cheese to keep an eye on their children – received 128 complaints, and was judged to perpetuate a damaging stereotype that men “were ineffective at childcare”.

Another, for Volkswagen’s eGolf, showed male astronauts and athletes alongside a woman with a baby in a pram, and was banned for contrasting male and female roles in a way that “gave the impression that they were exclusively associated with one gender.” It’s interesting to note that Volkswagen’s ad only received three complaints – which is perhaps a reflection of how unremarkable these kinds of female stereotypes have become.

The news has drawn mixed opinions. Reading the ASA’s reports on both ads reveals significant frustration on the part of Clearcast, which vetted the ads in the first place. “We are naturally disappointed,” the organisation commented in a story by The Guardian. “The ASA’s interpretation of the ads against the new rule and guidance goes further than we anticipated and has implications for a wide range of ads.”

Others think the ASA has overstepped the mark. “It is concerning to see the ASA take on the role of the morality police,” Lewis Silkin lawyer Geraint Lloyd-Taylor told the Guardian. “It has let its zeal to enforce the new rules override its common sense in this first batch of rulings. The ASA seems to be out of sync with society in general. As it stands, the ASA’s definition of ‘harm’ is unworkable and urgently needs to be clarified. I hope that these advertisers seek an independent review of the latest decisions.”

But has it really gone too far? The new rules state simply that “advertisements must not include gender stereotypes that are likely to cause harm, or serious or widespread offence”, and it feels hard to argue against that.

Creative agencies have subjected us to years of two-dimensional characters. The frazzled mum and the fraught housewife have all become well established tropes which brands rely on to sell their goods. And as CR Editor Eliza Williams noted in a piece about gender stereotypes, ‘tent-pole moments’ such as Like a Girl or Fearless Girl don’t translate across the board, meaning everyday ads can’t help but return to lazy cliche.

Advertisers and their creative agencies have had decades to create a more nuanced narrative, and yet in 2019 the best Philadelphia can do is still ‘useless new dad’. In Volkswagen’s case, it’s not harmful in itself to suggest that motherhood is a life-changing experience – but when the only woman in your ad is sat on a park bench with a pram, while men are achieving incredible feats in space or on the athletics track, it starts to feel a little less innocuous, and a little more like a reinforcement of the kind of stereotypes that the new guidelines were brought in to tackle.

Without some kind of external framework for what’s acceptable, it seems unlikely adland is going to move past these gender stereotypes – or at least, not with any speed. While we undoubtedly need to be careful that bodies such as the ASA don’t stifle creativity and expression, surely it’s about time we held advertisers accountable for their outdated and unrealistic portrayals of gender?