From frontline workers turned cover stars in British Vogue’s latest issue to David Hockney’s powerful iPad painting of ‘a new dawn’ for the Telegraph, the current crop of magazine covers are unlike anything we’re used to seeing in normal times.

Vogue Italia is one of the titles that has been using coronavirus as an opportunity to rethink its creative approach. In the midst of one of the worst outbreaks in Europe, the magazine’s April issue featured a blank white cover – a symbol of rebirth and, as Emanuele Farneti wrote in his editor’s letter, “the title page of a new story that is about to begin”.

#OurNewWorld, the June issue of Vogue Italia, will be on newsstands tomorrow. The issue is entirely dedicated to children, featuring eight covers drawn by eight very young authors aged between two and ten. #OurNewWorld Rachele T., 5 years old, from Bologna, made many attempts with sequins, stars and applied fabric. She was so passionate that she did a customized Chanel logo on one of her white t-shirts. For the Vogue Italia’s cover she drew a @Chanelofficial look from the Métiers d’art 2019/20 collection. ———— Cover 7 of 8 Editor-in-Chief @EFarneti Creative Director @FerdinandoVerderi Discover more via link in bio.

The magazine’s new issue takes a similar tone but with wildly different results; for the first time in its 55-year history it has commissioned children to design eight special edition covers.

“There’s a simple and fundamental reason why this issue of Vogue Italia is dedicated to children, to their new world. It’s because we think they are the most overlooked and least obvious victims of the pandemic that is affecting us all,” says Farneti. 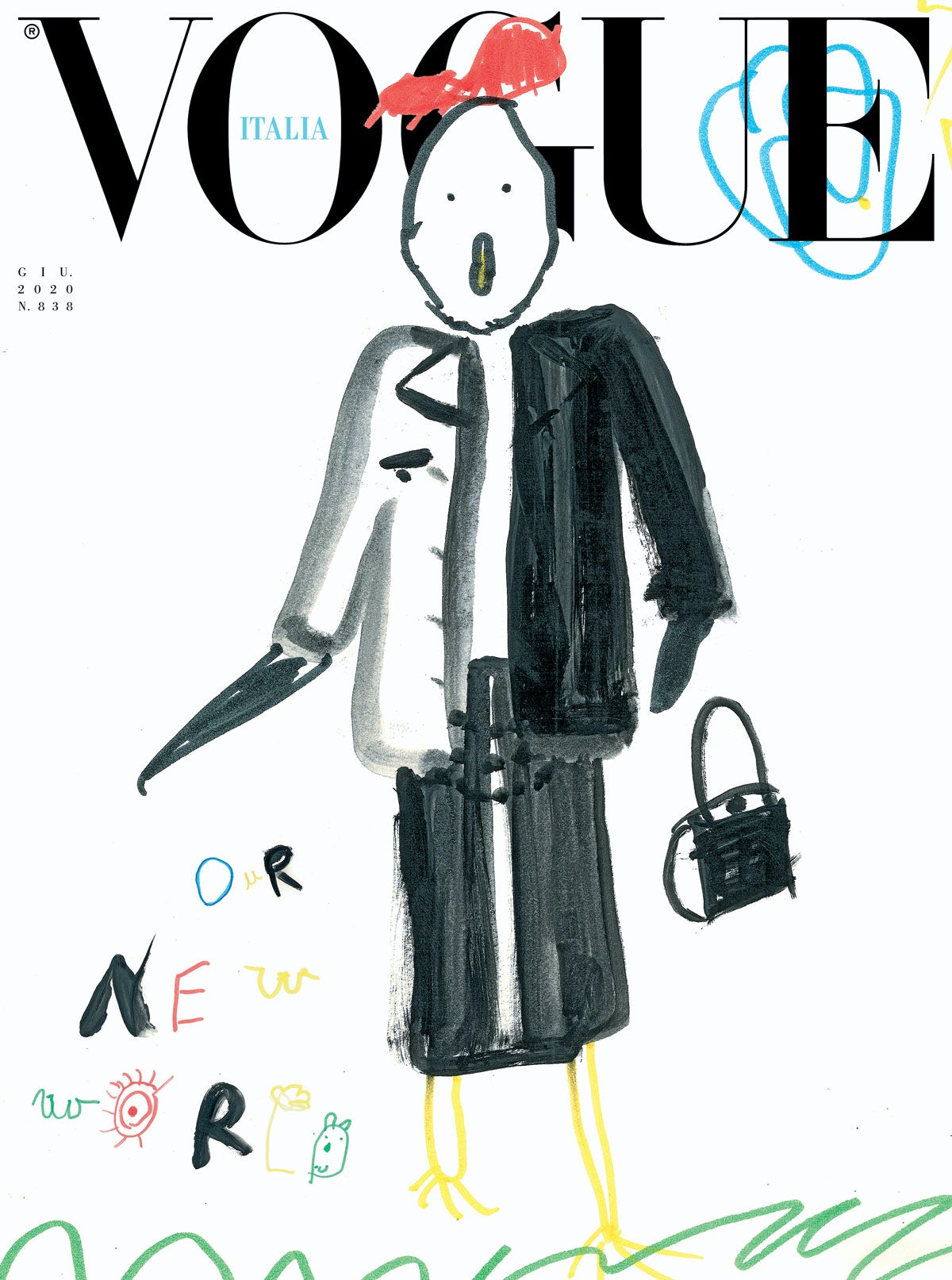 It’s not the first time that the mag has ditched glossy photoshoots for more unusual methods; earlier this year it signalled its commitment to sustainability by commissioning various illustrators to produce all of the visuals for its January issue.

#OurNewWorld, the June issue of Vogue Italia, will be on newsstands tomorrow. The issue is entirely dedicated to children, featuring eight covers drawn by eight very young authors aged between two and ten. #OurNewWorld Giorgio P., 10 years old, lives in Parma. For the Vogue Italia’s cover he drew a @Chanelofficial look from the Métiers d’art 2019/20 collection. ———— Cover 5 of 8 Editor-in-Chief @EFarneti Creative Director @FerdinandoVerderi Discover more via link in bio.

The intergenerational theme is also carried through to the rest of the issue, which features everything from an exchange of letters between designer Giorgio Armani and eight-year-old Luca, who proposes a collection of outfits equipped with superpowers, and an editorial piece by photographer Steven Klein and his four-year-old son Ace, shot during lockdown at their ranch near New York.

Read our piece on how magazines are responding to coronavirus here; vogue.it