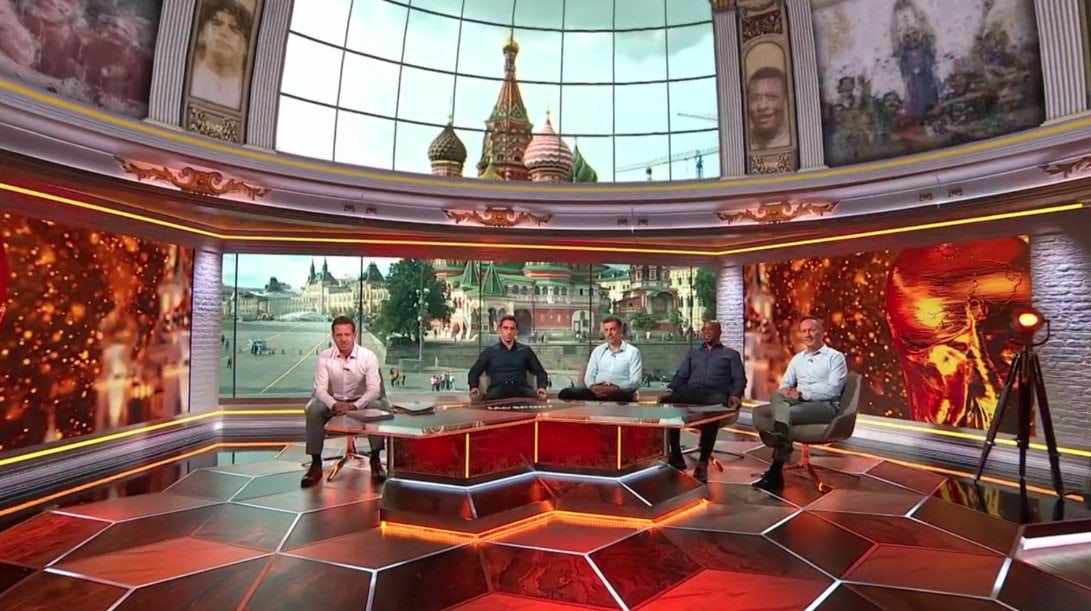 It didn’t take long for ITV’s World Cup TV studio to start trending on Twitter. Viewers tuning in to the tournament’s opening match, Russia v Saudi Arabia, were met with a spectacular view of St Basil’s Cathedral in Red Square, surrounded by a baroque ‘theatre of football’, combined with animations of liquid gold. Think Moscow subway station-cum oligarch’s sitting room with a dash of Saturday Night.

The studio’s design, explains Paul McNamara, Senior Director and Executive Producer of ITV Sport’s World Cup coverage, was driven by a mixture of wanting to show off its location in Red Square but also recognising that the World Cup brings a much more mixed audience with it than a standard football show. “I just thought really we’re not a sports show for this next month, we’re an entertainment show,” he says.

ITV has one of eight purpose-built studios in Red Square in Moscow. “We’re on the top block, right next door to the BBC, so we have exactly same view as them,” he says. “My first thought was ‘how can I get a better view than them?!’”

From the studio window, it is only possible to see half of the iconic cathedral outside – but with some tech innovation, the ITV studio is able to display the entire building. As the viewer looks at it, the bottom half of the studio is ‘real’ with a central window looking out onto the square. The top half is created using Augmented Reality.

“We’ve created a virtual ceiling – the whole of the ‘cathedral’ section doesn’t exist,” he explains. There are two cameras outside pointing at St Basil’s. “They ‘perspective track’ onto the live shot you are seeing through the bottom half of the window, so the bottom half is live, and the top is perspective tracked on top of that so it all moves together.”

Having the AR ceiling provides plenty of flexibility to change things during the tournament. For the first game, the ceiling was decorated with images of famous players and World Cup moments – Maradona, Italy’s Fabio Cannavaro lifting the trophy in 2006, and so on. “We can change all of those in an instant,” McNamara says. “I’ve got a designer with me all the time. On England nights, we could put Gazza up there or Alf Ramsey, whatever we want.”

During the ad break before games, the real window behind the presenters is replaced with an LED screen so that, when the show returns, the set is transformed to display the feed from the stadium. Two LED screens at either side can either also show the same feed or can display graphics, players or anything McNamara wants them to.

As for the overall aesthetic of the design, McNamara says, “If you go into the tube stations here they can be incredibly ornate, it’s all slightly over the top. The World Cup brings so many more people to the show, not just diehard sports fans. They are there to be entertained, which is why we made the titles with the circus and ballerinas – the whole thing is to tie in with the feel of theatre, we’ve got stage lights, red drapes.

“We want it to look beautiful, but we’re trying to take it out of the classic sports studio-type thing and add a bit more fun and entertainment. It’s something you might normally expect to see more on X Factor but my view was for this next month we are the X Factor of the network and we have to approach it like that – be big and bold, not just three men sitting, talking about the game and doing it like they did 20 years ago.”