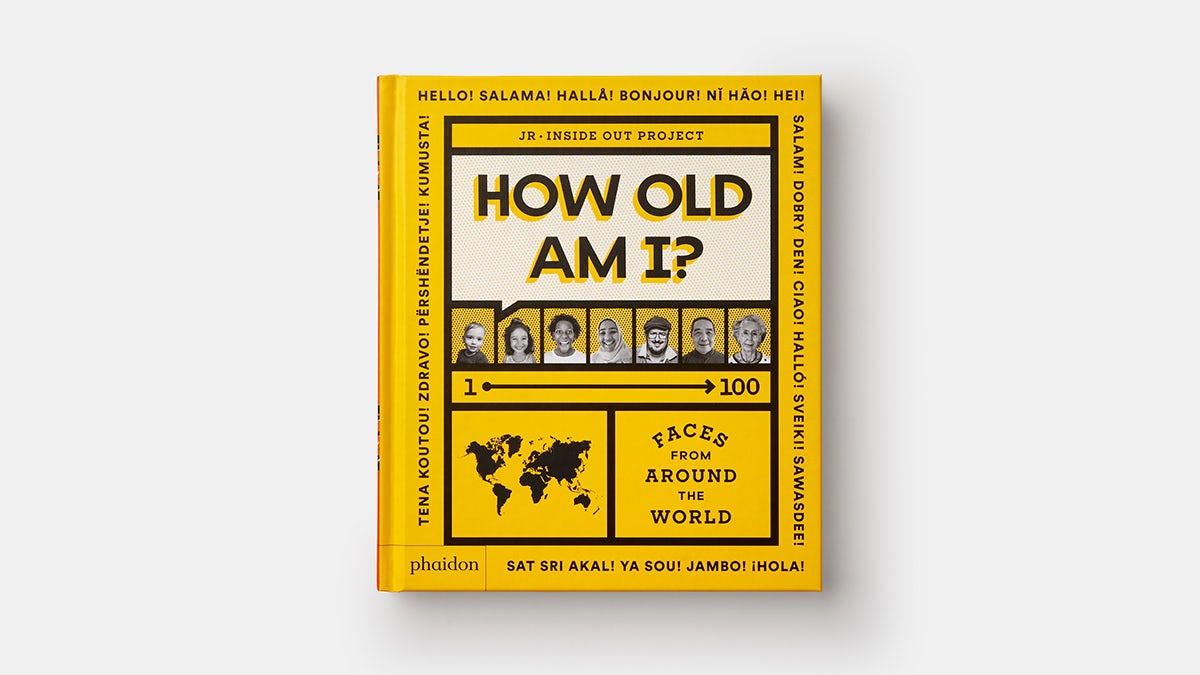 Back in 2011, French artist JR launched his Inside Out project, inspired by his series of large-scale portraits that are pasted in the street. To allow members of the public to do their own pastings, they are encouraged to send in a portrait, shot in black and white, which is then printed in large format and sent back to them for free. The portraits have been pasted across buildings and streets in large-scale outdoor artworks and, ten years, 130 countries and 400,000 posters later, it’s still going strong.

Evolving from the Inside Out project is JR’s new book How Old Am I? The book charts ages one through to 100 in numerical order, from one-year-old Gwen to 100-year-old Beatrice. Each age is represented by a person from a different country, and is intended to capture the process of growing older as well as the differences and similarities of people’s life experiences around the world. 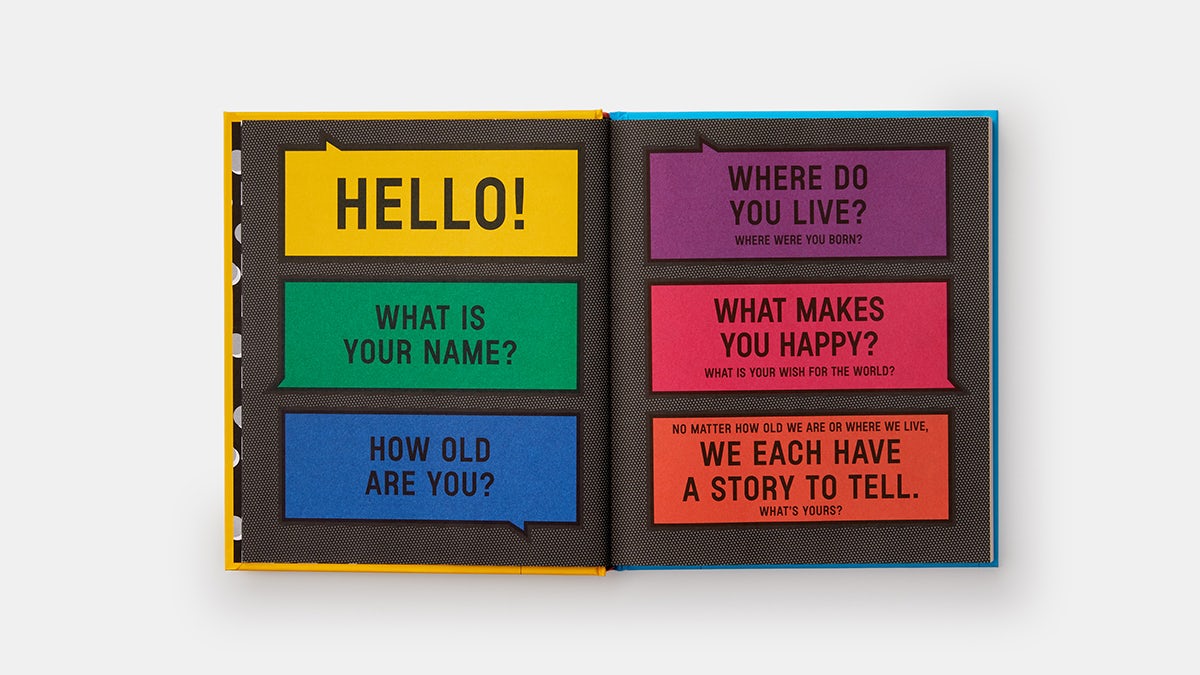 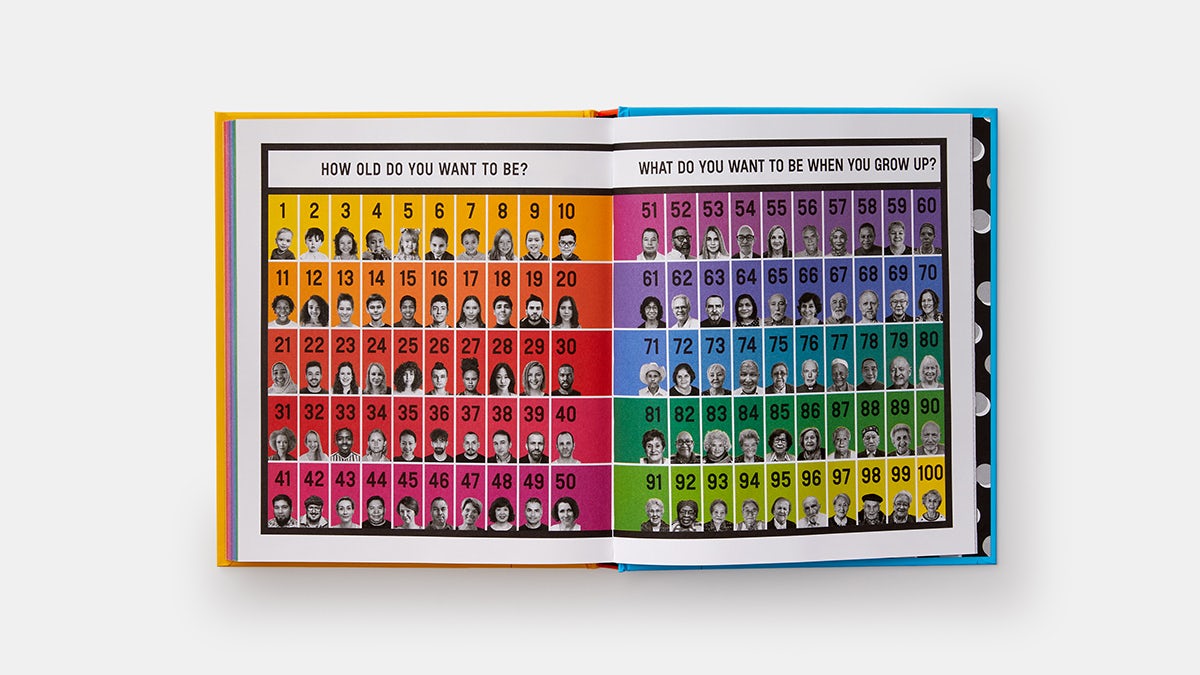 Each section features a black and white photograph of the individual, a small map illustrating where they were born and where they live, and a short bio divulging their hopes and dreams, experiences and memories.

Participants were found through social media and word-of-mouth, with the team doing call outs towards the end of the project to complete the challenge of covering 100 ages from 100 countries. In a virtual talk hosted by Phaidon, the book’s publisher, JR explained the difficulties that came with this: “It was so hard at the end because then you [have to] look for someone from Turkey who’s 97!” 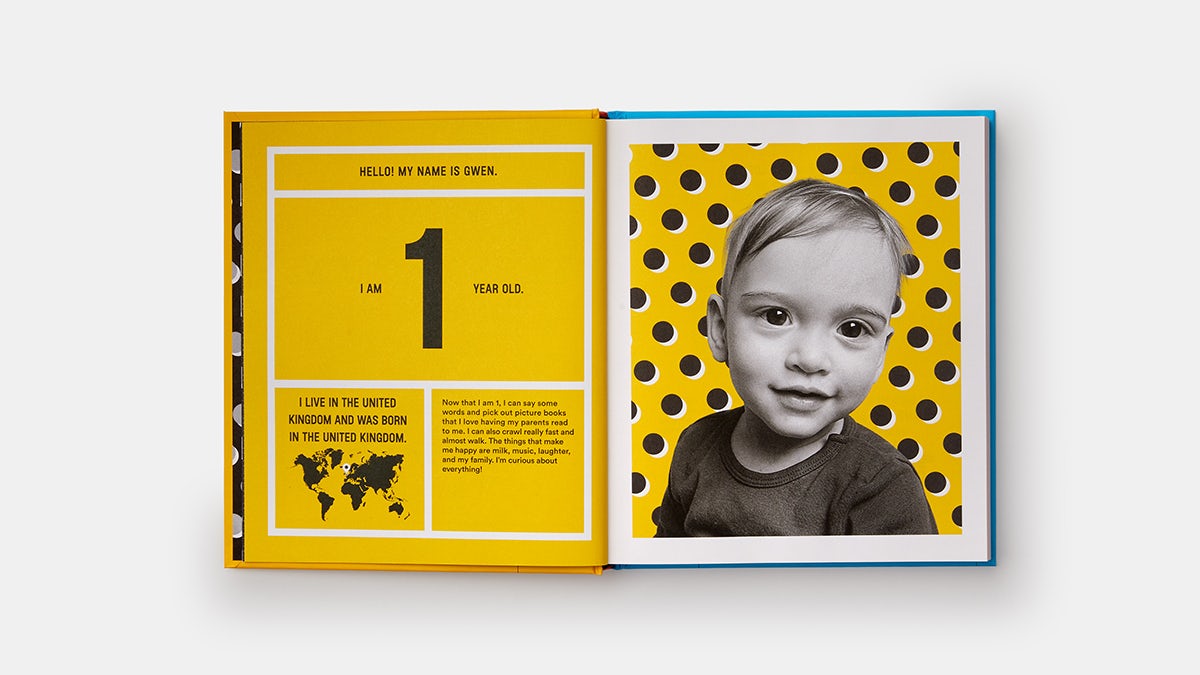 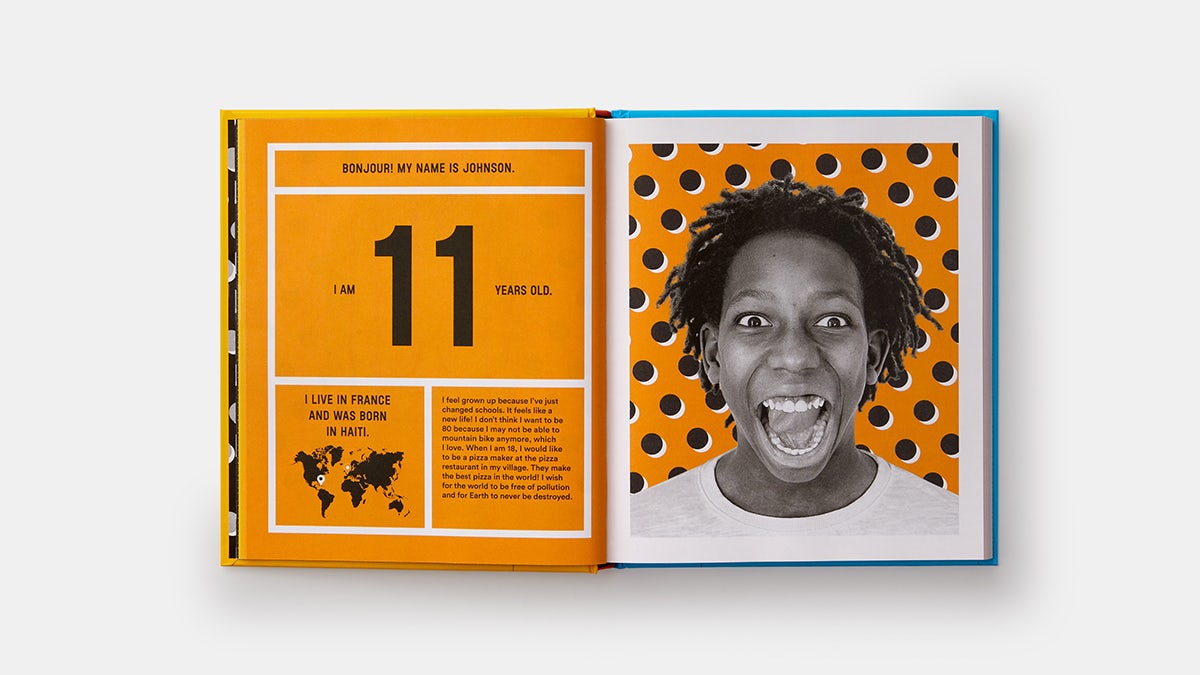 While the book incorporates photographs and vibrant design, the core of the book is the stories, which JR hopes will spark discussion between the children reading the book and their families. “My work is always an excuse to start a conversation, whatever it is and however we actually [do] that,” the artist explains. “Whenever we have those portraits pasted in the street or whenever I’m organising a pasting, it’s actually an excuse for a conversation. That’s really the meaning of my work – it’s to create discussion.”

“That’s what this book is doing. It even has a question mark on the cover,” he adds. “I think that’s the best thing we can do for kids today – push them to constantly raise questions.” 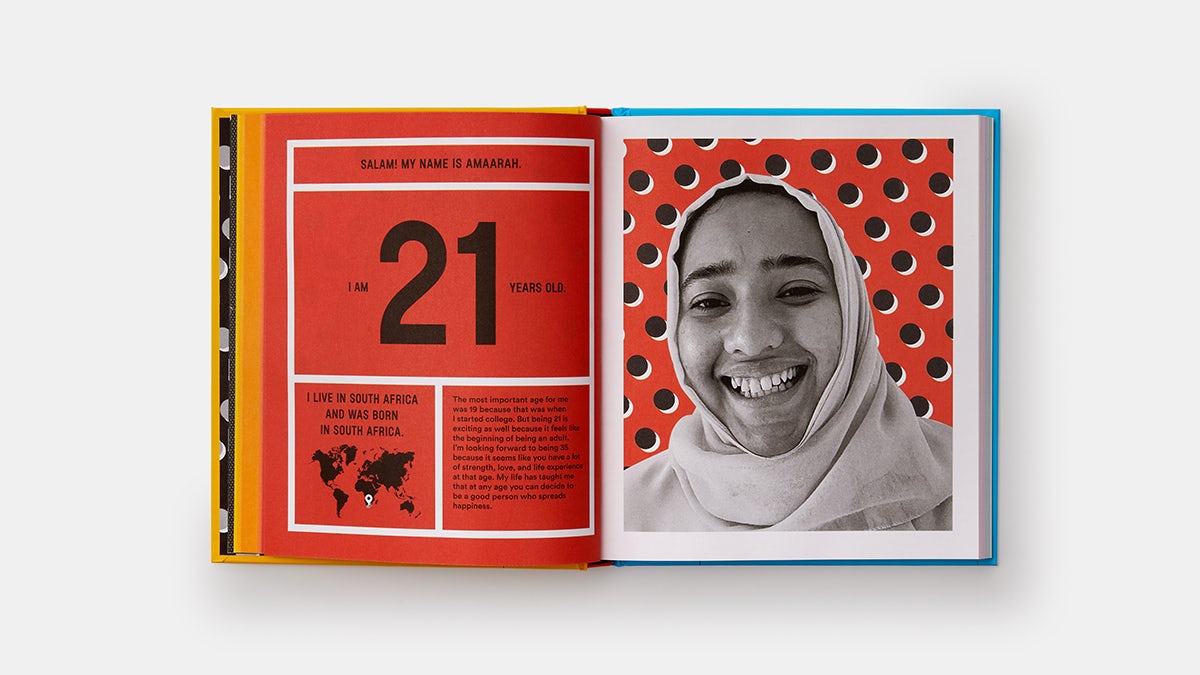 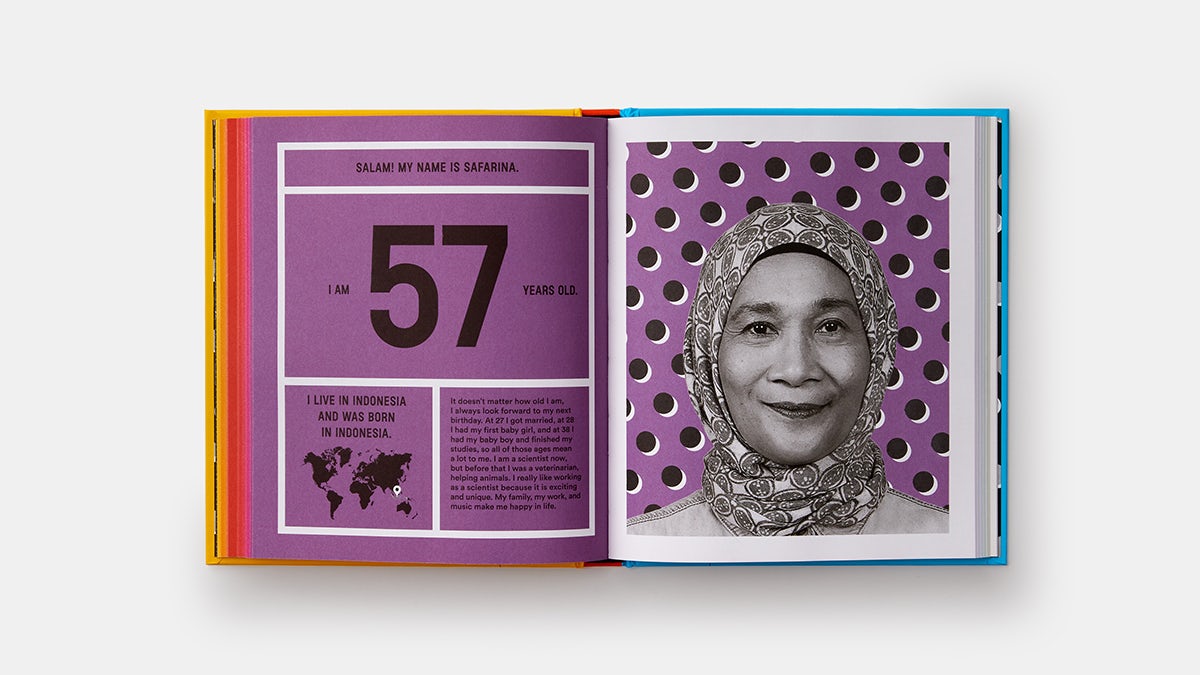 How Old Am I? 1-100 Faces From Around the World is published by Phaidon; phaidon.com