This year’s Kantar Information is Beautiful Awards comprised 8 subject categories and five special categories. The winning work showcases the far-reaching creative potential of data visualisation and infographics. Featured here are some of our favourite projects from the winners:

The Unlikely Odds of Making it Big

Gold winner of the Arts, Entertainment and Pop Culture category

This visualisation was created by Russell Goldenberg and Dan Kopf for The Pudding. It shows the unlikely odds of your favourite band making it big in the music industry, by sampling 75,000 of the shows that took place in the New York City area between 2013 and 2016. 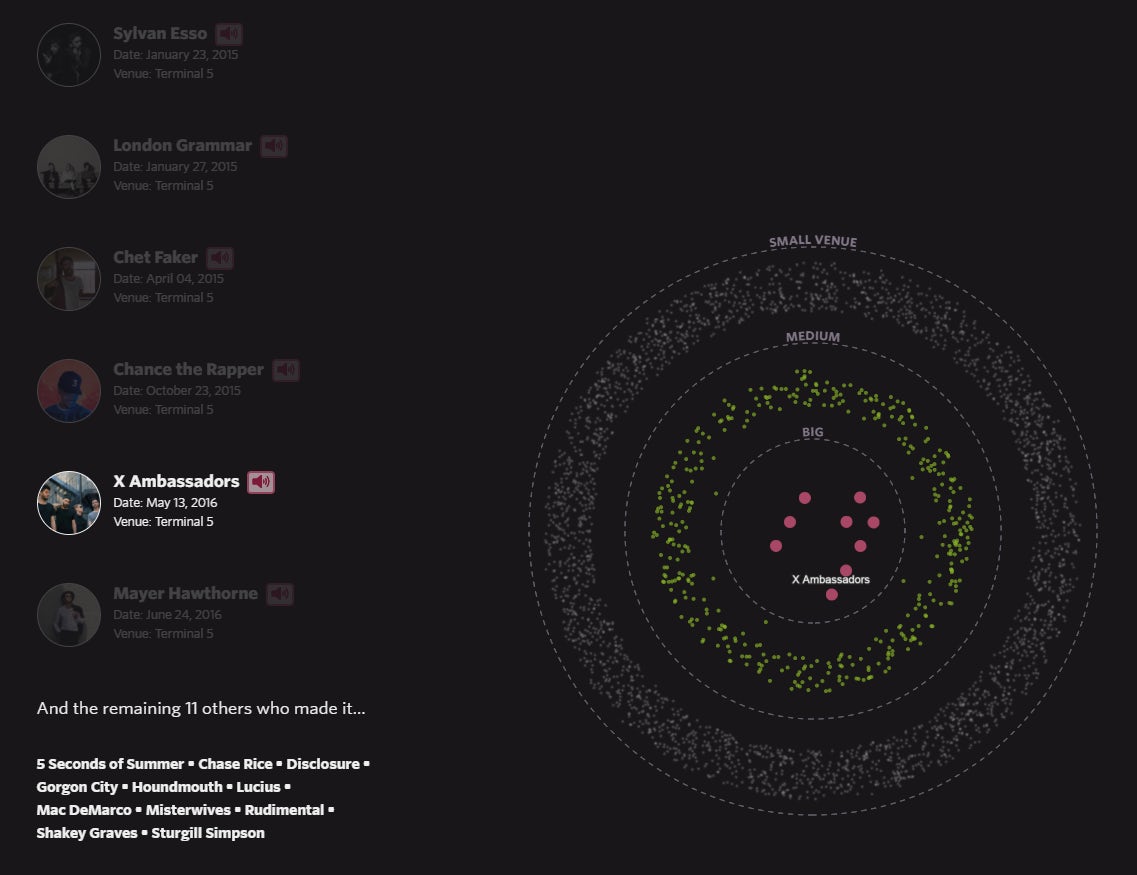 On Their Way: The Journey of Foreign Fighters

Gold winner in the Current Affairs and Politics

This infographic designed by DensityDesign Lab shows the journey that radicalised foreign fighters take to make it to ISIS-ruled territories. It shows the geographical distances these fighters travel, the populations of the places they travel to and from, and even traces journeys of the few that make it back. Publicly available data was used to create the infographic.

Winner of the bronze award in the Current Affairs and Politics

Created for The Guardian, this map traces America’s gun violence epidemic, highlighting the unequal distribution of where it occurs.

How do you draw a circle?

Gold winner of the People, Language and Identity category

Quartz analysed how 100,000 people from different parts of the world draw circles – using data from Google’s game Quick Draw. The data reveals some interesting facts about how language and culture influence the way we draw.

Gold award winner of the Sports, Games and Leisure category

This project uses more than 12 years of Google Trends data to study trends in global food preferences and habits, including seasonal patterns in the kinds of ingredients, dishes and recipes people tend to be interested in.

What’s it like to get trolled all day long?

Winner of the silver award in the People, Language and Identity category

Created by HT Digital Stream Ltd for Indian news publication, Hindustan Times, this infographic traces the challenges faced by outspoken, politically active women on Twitter. A day’s worth of tweets from four prominent Indian woman on the platform – Barkha Dutt, Rana Ayyub, Tavleen Singh and Madhu Kishwar – was analysed, to detect profanity, abuse and aggression directed towards them.

Gold winner of the Environment and Maps category

Designed by Russian news agency TASS, this map presents a graphic picture of Napoleon’s unsuccessful campaign in Russia. A printed map created by French engineer Charles Joseph Minard in 1869 was used as a reference.

The Shadow Peace – The Nuclear Threat

Gold winner of the Humanitarian/Global category

The Nuclear Threat is the first episode of The Shadow Peace documentary series, which uses cinematic data visualisation to address issues of war, peace and humanity.