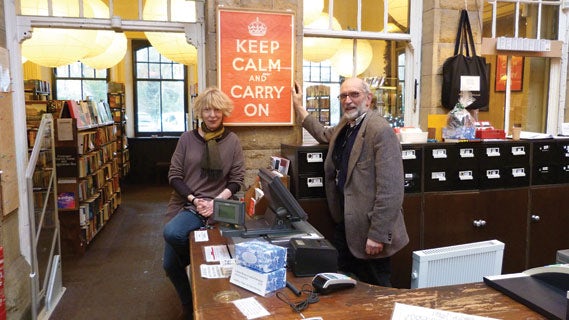 A handful of British second world war propaganda posters employed slogans that are still well known today. ‘Dig for Victory’, ‘Careless Talk Costs Lives’, ‘Make Do and Mend’ have become classics of the medium, the latter gaining a new relevance in these frugal times. Similarly resonant, ‘Keep Calm and Carry On’ has now perhaps become the most famous of the lot. In part, this is due to the nostalgic appeal of its stiff-upper-lip sentiment, delivered in clipped alliterative RP, but the timing of its reappearance as a recession loomed could not have been bettered.

Yet despite being printed by the Government’s Ministry of Information on around 2.5m posters in August 1939, ‘Keep Calm and Carry On’ was never actually seen in public, according to research conducted by historian Dr Rebecca Lewis. It was kept in reserve only to be used if the country was invaded – after the war the entire series of posters was pulped. With only a few rare copies in existence, the phrase effectively remained unknown for 60 years, until an original of the poster was discovered in a bookshop in Alnwick, Northumberland in 2000.

Stuart Manley, who runs Barter Books with his wife Mary, discovered it folded up at the bottom of a box of books they had recently bought from auction. Admiring the bold red and white design – the only graphic concession is a George VI crown above the text – they framed the poster and hung it by the shop’s till. As more and more customers enquired about obtaining a copy, the Manleys printed up an initial batch of 500, and had sold a few thousand before the poster was featured in a Guardian supplement in December 2005. The subsequent increase in demand for the poster broke the shop’s website, says Manley, and the staff were immediately put on packing duties. In this wave of interest in the phrase, it soon relocated to mugs, mouse mats, T-shirts and beyond. It now brings up a cool 42m hits on Google.

The phrase has since become an industry in itself with ‘Keep Calm and Carry On’ products being bought and sold all over the world. Apparently, it is particularly popular in the US and Germany, with financial firms and advertising agencies. And it’s been spoofed and parodied many times over (‘Keep Calm and Have a Cup­cake’), often with the crown device substituted for a more fitting emblem. The craze also reignited interest in the two other posters that were produced at the same time and that, unlike ‘Keep Calm’, saw active use: ‘Freedom Is in Peril: Defend It With All Your Might’ and ‘Your Courage, Your Cheerfulness, Your Resolution Will Bring Us Victory’. Modern tastes dictate that these posters are available in green and blue, however, rather than in the bright pillar box red that originally united them.

In August last year the story took another turn. Mark Coop, who had founded Keep Calm and Carry On Ltd in 2006, successfully applied for an EU trademark on the phrase. His online shop now sells other non-KCACO merchandise, but the action unsettled numerous eBay traders who have since been forced by the site to stop selling goods using the line. Barter Books still sells its prints and a range of other items – it is the source of the poster’s rebirth after all – but the Manleys are keen that the phrase be returned to the public domain (there’s now also a petition to reverse the recent trademark decision).

A decade into the poster’s second life it’s ironic that any ‘calm’ it once sought to instil is now caught up in a decidely 21st-century ‘carry on’.