Floating in the North Pacific Ocean is a mountain of waste the size of France. The Great Pacific Garbage Patch is made up of two masses of rubbish between the US and Japan and contains everything from LEGO bricks to computer monitors and fishing nets.

This pollution has had a devastating effect on marine life (around 1 million seabirds die from encountering plastic waste each year) – so media site LADbible has joined forces with The Plastic Oceans Foundation to do something about it.

In a video posted on LADbible yesterday, former Eastenders actor and TV tough guy / documentary maker Ross Kemp (who travelled the world tracking down criminals for series Ross Kemp on Gangs) announced a campaign to make the Pacific garbage patch a recognised state.

An application submitted to the UN on World Ocean’s Day asks for ‘The Trash Isles’ to be recognised as an official country. Climate change campaigner and former US Vice President Al Gore has been named an honorary citizen and the Trash Isles even has its own currency, stamps and passports.

The LADbible film invites viewers to pledge their support for the campaign by signing a change.org petition urging the UN to approve the application.

If the application is successful, the petition claims that other world leaders would be forced to work together to ‘clean up’ The Trash Isles under the UN’s Environmental Charter. (The charter states that “all members shall co-operate in a spirit of global partnership to conserve, protect and restore the health and integrity of the earth’s ecosystem”.)

The Trash Isles campaign was thought up by ad creatives Michael Hughes and Dalatando Almeida. Designer Mario Kerkstra created the identity for the island, designing its flag as well as banknotes and a passport for Gore. LADbible developed the campaign’s overall look and feel and led the campaign’s marketing strategy and content production.

The campaign is designed to raise awareness of the issue among LADbible’s 60 million social media followers and force world leaders to do something about it.

“Even though the Trash patch covers an area the size of a country, it is easy for world leaders to ignore. The saying ‘out of sight, out of mind’ could not be more applicable than with this issue,” say Hughes and Almeida.

“We wanted to come up with a way to ensure world leaders can’t ignore it anymore, a way to stick it under their noses, literally.”

Stephen Mai, Head of Marketing at LADbible Group, who is leading the campaign says: “Our audience care passionately about the environment but demand content be relatable. We built the Trash Isles campaign with this in mind, developing strong visual elements that gave it a feel of a real country, such as passports, a football team and assigning well known personalities like Al Gore and Judi Dench with iconic country roles.”

Hughes and Almeida are hoping that one million people will sign the petition – putting pressure on the UN to approve their application. They also claim to have met the UN’s criteria to become a country as set out in the 1933 Montevideo Convention on Rights and Duties of States, adding: “We have done everything by the book and all that we can to make it happen. As to whether they approve the application, only time and support will tell.”

Hughes and Almeida say they approached LADbible as they “needed reach and the right audience”.

“That following is the generation that will have to deal with this problem if it is not addressed. Scientists predict that by 2050, plastic will outweigh the fish in our ocean. Also, this campaign will develop over the coming months and their online expertise, editorial content and marketing strategies will help The Trash Isles grow and grow. Obviously not in the physical sense – we don’t want that at all,” say the pair. 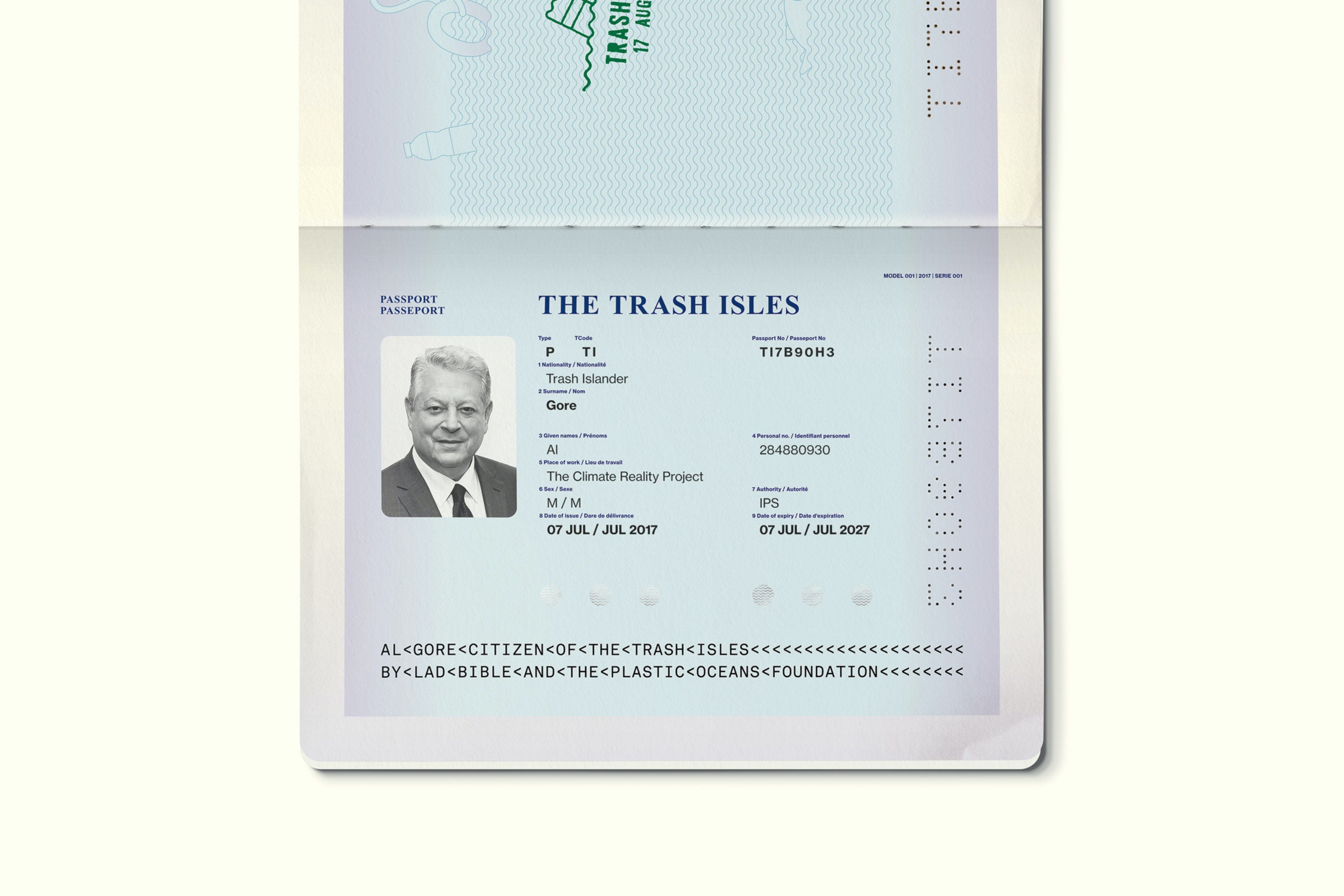 LADbible has set up a campaign page on its website and Hughes and Almeida will be working with the site to create a national anthem and a football kit for The Trash Isles while continuing to lobby world leaders to tackle the issue of marine waste. There are also plans to give out passports to more ‘citizens’ and stamps will be used in all official correspondence with world leaders.

“We did not just want to talk like an official country – we wanted to walk like one too, so we created everything one needs,” say the pair.

Campaigns raising awareness of climate change or pollution often rely on shock tactics and hard hitting messages. Hughes and Almeida’s Trash Isle project also manages to deliver a serious message about the extent of the problem in our oceans but does so with wit and a touch of wry humour.

It seems a little unlikely that the Trash Isles will be recognised as an official country – but it’s an inventive approach to talking about climate change. And at the very least, it might help spread awareness among LADbible’s sizeable audience.