‘Slogans in nice typefaces won’t save the human races’ was a sentence – indeed, a slogan – that really got designer Lucienne Roberts thinking. When she was awarded a residency at the Hoffmitz Milken Center for Typography in Los Angeles, it was that phrase that formed the centrepiece of her exhibition, succinctly titled Nice.

Roberts, who is co-founder of publishing and curatorial venture Graphicdesign&, first came across the phrase thanks to the posters pasted around the streets of London by artist and graphic designer Tim Fishlock, working under his alter ego Oddly Head. Fishlock has stated that the slogan was a response to “an epoch of demagoguery and debacle”, and Roberts saw much in it to unpack though the lenses of typography, linguistics, politics and associated imagery.

“The more I saw it, the more it resonated,” she says. “It’s pretty unusual to see anything in this context mentioning typefaces. I interpreted it as a political statement, a critique of graphic designers who make political work that doesn’t change anybody’s mind.”

It was when she put together the residency proposal that Roberts “realised how clever the wording is”. She says: “When you consider what it means – ‘what is defined as a slogan?, ‘what does “nice” mean in relation to fonts?’ and ‘human races was very intriguing – obviously the use of the word ‘races’ helps the whole thing rhyme, but it’s also quite provocative’, she adds.

Roberts started to deconstruct the language of the phrase after thinking on first glance that it “renders everything we do [as designers] meaningless…. I didn’t want to challenge it completely, but to tease out the meaning in a way,” she says. 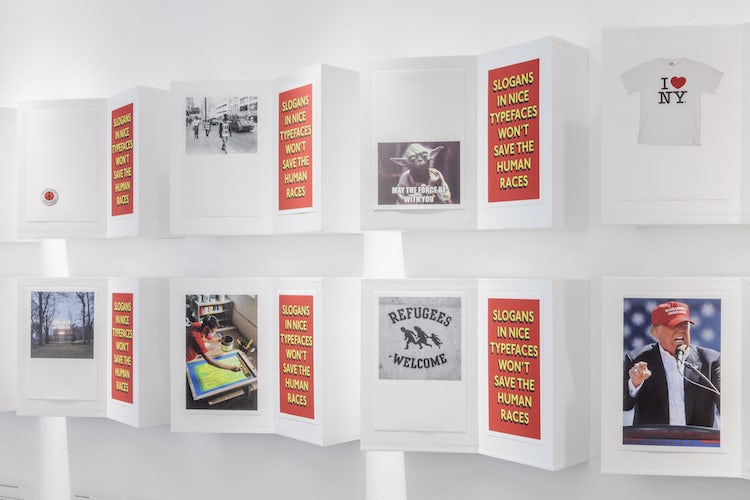 One section of the exhibition sees the poster reproduced multiple times next to images referencing other well-known slogans. Yoda’s ‘may the force be with you’ sits alongside ‘refugees welcome’; while Milton Glaser’s ‘I Heart NY’ is perched above an image of Donald Trump sporting his ‘Make America Great Again’ baseball cap.

Much of the project saw Roberts playing with the language of the phrase, seeing what the implication would be if she were to swap out single words. “If you replace the word ‘slogan’ with the word ‘book’, for example, you work out which bits are most potent and powerful,” she says.

“By just changing one word, the meaning changes hugely. There’s lots  of ways books can change hearts and minds – they’ve been one of the most effective methods we’ve had of doing that for hundreds of years.”

As such, showcasing books was a key component in the show as a demonstration of the power and mutability of language and typography. A Quran is on display, as is a rare facsimile of typographer and printer Giambattista Bodoni’s 1806 Oratio Dominica, in which the Lord’s Prayer is reproduced in 155 languages. Some of Anthony Burrill’s work is also featured, including his famous Work Hard & Be Nice To People print.

Another section displays printouts of emails that Roberts sent to a number of different graphic designers and typographers including Erik Spiekermann, Paula Scher and Hamish Muir, in which she asked them to cite five nice typefaces. “A lot of people agreed with me that ‘nice’ was a very loaded term,” says Roberts. “Some people just spoke about their favourite fonts and mentioned the ones that are useful, conceived thoroughly and that have a rigour, but are useful workaday fonts, like Helvetica. It was great to see how differently people responded.”

A vast ‘nice’ appears on a entrance wall of the exhibition space. Roberts considered using the Utopian Alphabet for this title, drawn from Thomas More’s Utopia, which Fraser Muggeridge digitised in 2016 but in the end opted for a supergraphic piece of lettering that she designed herself.

At the heart of it all, Roberts seems to be refuting the statement at the basis of the project while simultaneously agreeing with it. “It’s arguing that there’s a responsibility in being a typographer as you’re making important messages travel further,” she says. “It’s not something to take lightly – the impact of print and how we communicate with each other is so important.”

Nice is running until 23 September this year at HMCT in Los Angeles; hmctartcenter.org/