If 2020 was a year of unknowns, 2021 has led us all to question what we want our ‘new normal’ to look like on a deeper level. In the world of media, it has forced editors and art directors to rethink the kind of content that’s inside their pages and carefully consider the message they want to send to readers with one of the most powerful tools at their disposal: the magazine cover.

While there is still plenty of room for frivolity and playfulness in how we consume print (Rubbish Famzine’s brilliantly bonkers approach is a case in point), some of the most powerful covers of the year were the ones made us view the big issues of our times in a different light. Delve into CR’s top ten picks for 2021 below. 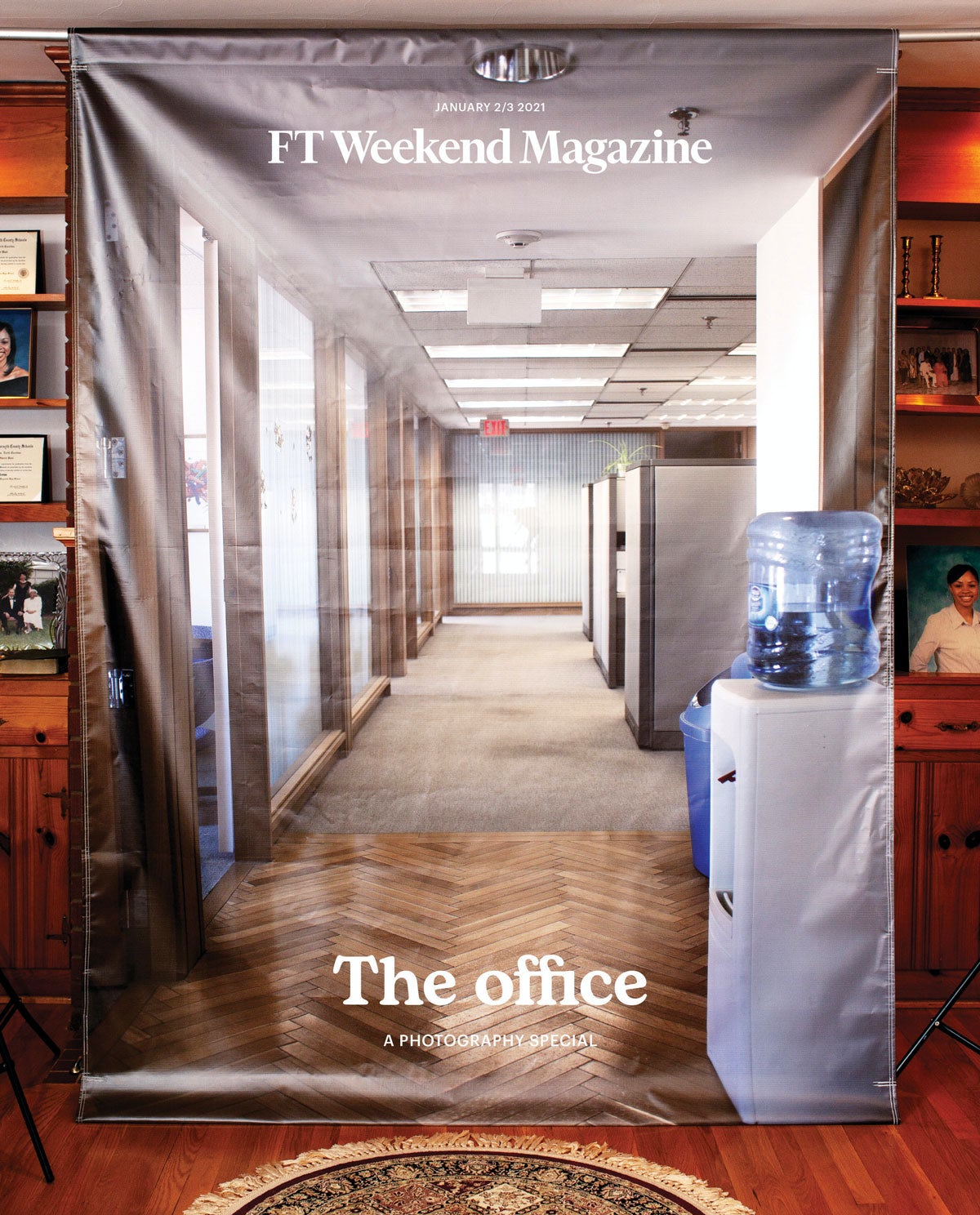 After a year of remote working, FT Weekend’s first issue of 2021 took an in-depth look at the office through the lens of great imagemaking. The cover features a photograph taken from American artist and educator Endia Beal’s series Performance Review. Shot in her childhood home using a projector, the image offers a clever reimagining of what is, let’s face it, not always the sexiest of visual subjects. 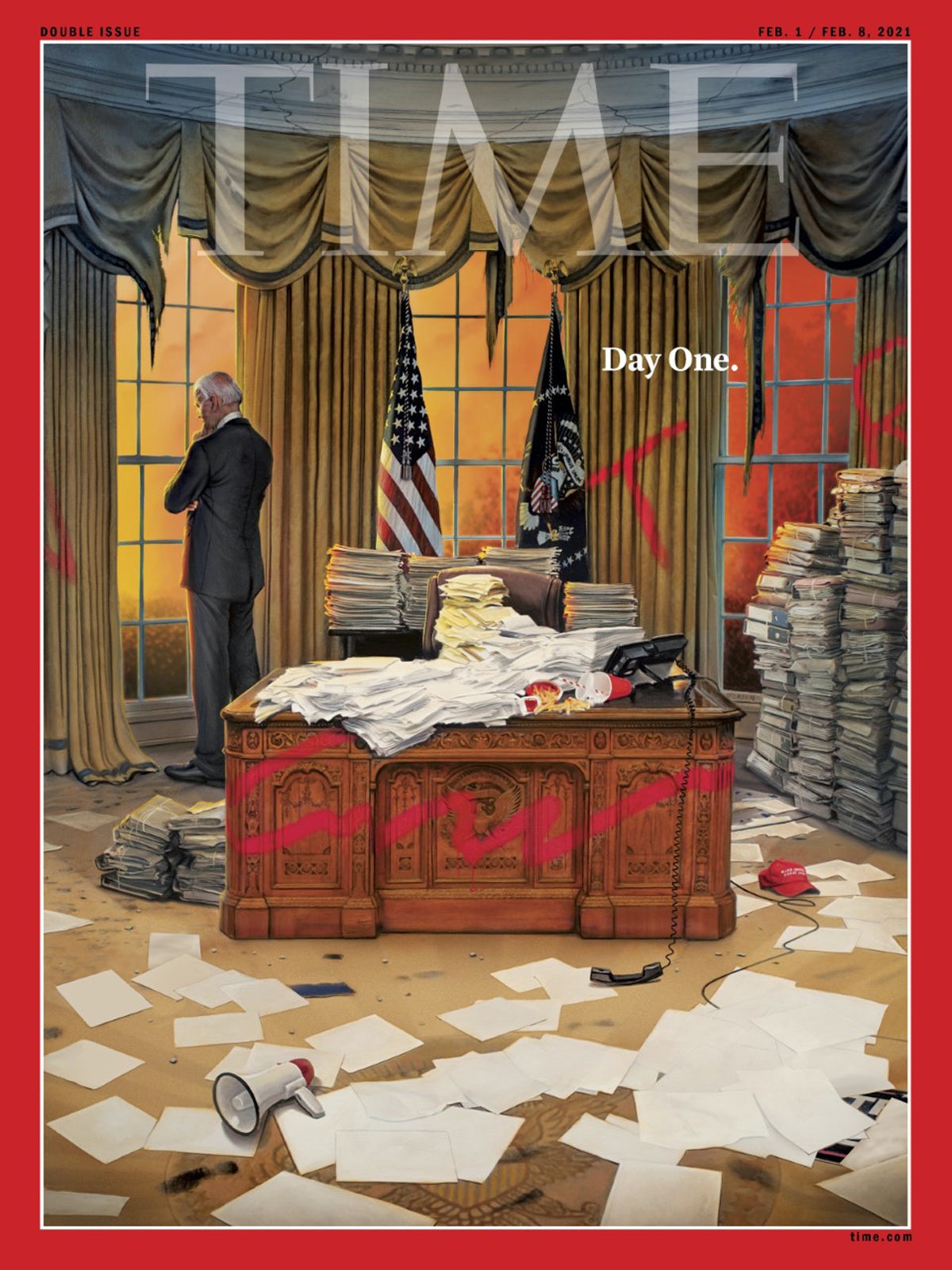 Illustrator Tim O’Brien has painted more Time covers in the past 30 years than any other artist. Best known for his series of four paintings for the magazine depicting former President Donald Trump in the midst of a growing storm in the Oval Office, the illustrator decided to continue with the theme by examining the mess that new President Joe Biden inherited from his predecessor.

In the powerful image, Biden is pensively looking out of a trashed Oval Office window, which appears to be surrounded by flames. Meanwhile, graffiti is scrawled on a curtain and the Resolute Desk, and one of Trump’s signature Make America Great Again caps is fittingly strewn among a pile of rubbish on the floor. 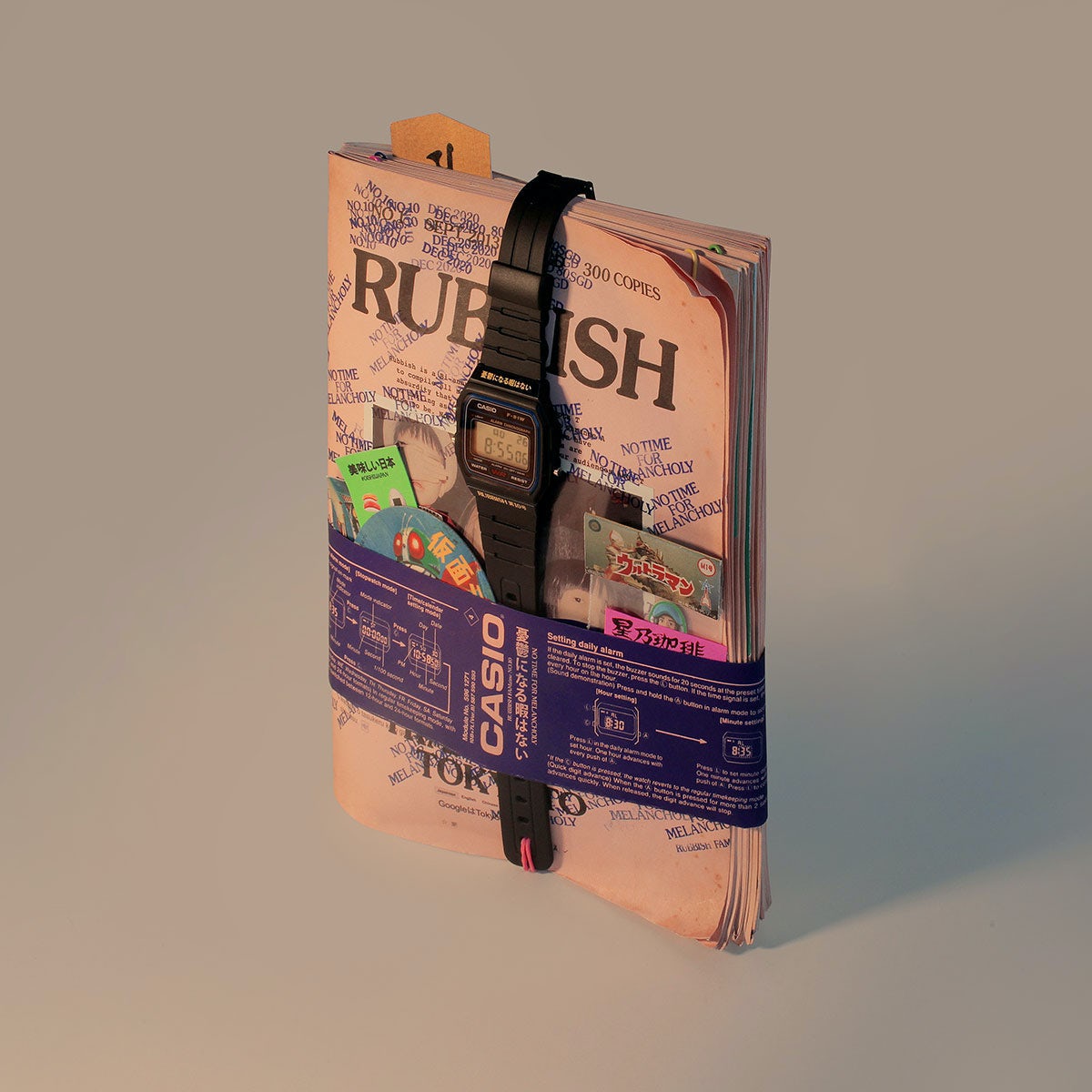 Produced by the Singapore-based Lim family and inspired by a family trip to Tokyo, Rubbish Famzine has recorded their lives together for the best part of a decade. The tenth issue of the publication was supposed to involve a return to Tokyo but with the pandemic having other ideas, the family decided to bring the Japanese capital to their home instead.

The cover of the brilliantly OTT issue came wrapped together with a series of miniature reproductions of items the family brought back from their trip to Japan, including a Rubbish-branded Casio digital watch which is used to seal the magazine closed. Because, why not? 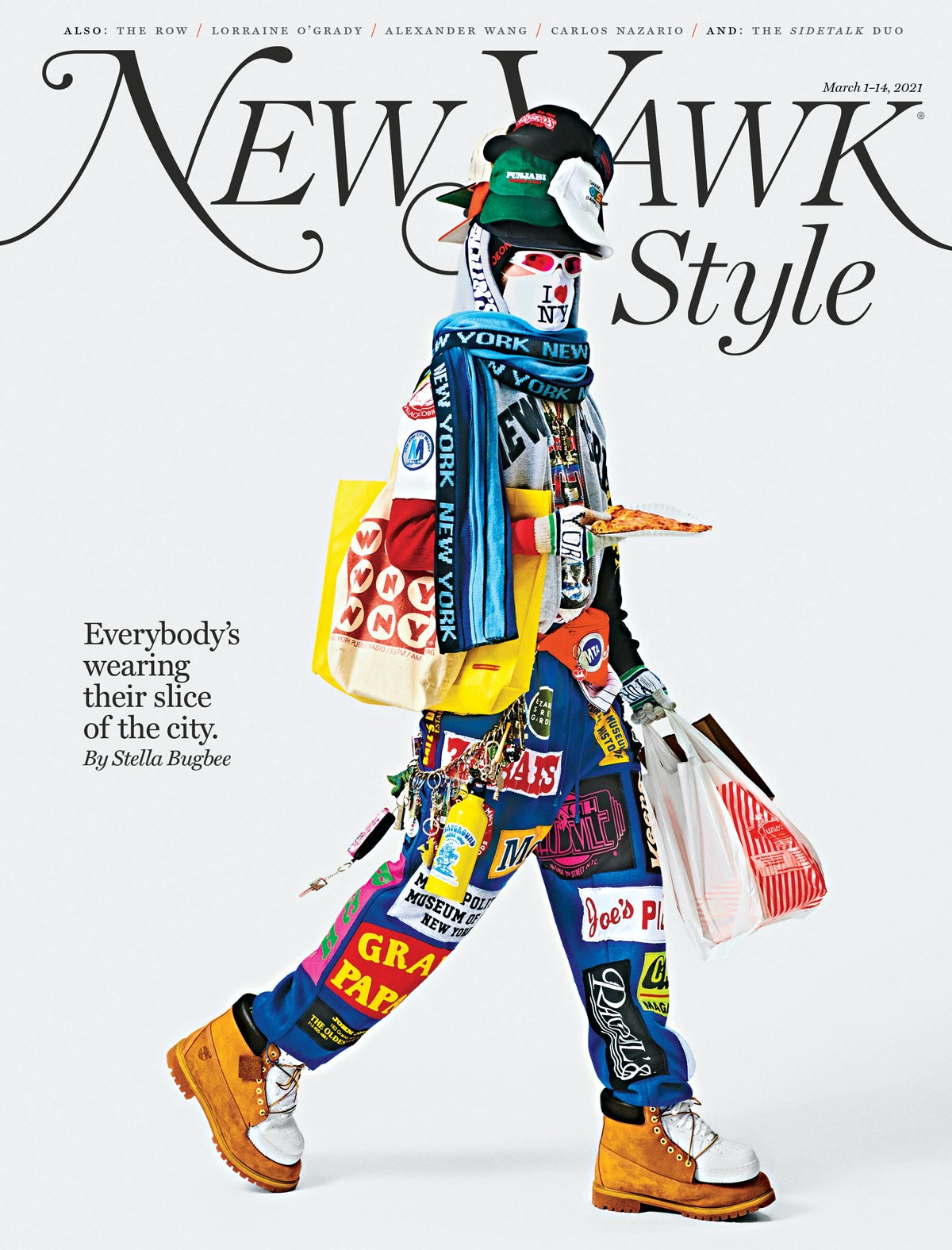 What began as a design team in-joke led to a name change for New York magazine earlier this year, when it temporarily switched its logo to ‘New Yawk’. The inspiration came from photographer Bobby Docherty’s vivid cover image of a model dressed in a collection of NYC’s finest branded souvenirs to accompany a piece about the latest fashion trend in the city – New York itself.

“The city and this style inspired it and it felt like keeping in that spirit of irreverence and fun. A lot of vintage T-shirts that play off New Yawk or Noo Yawk. The story had been slugged internally as New Yawk style,” design director Thomas Alberty told Magculture. “Then photo director Jody Quon suggested changing the logo and we all kind of laughed. And then we were like, why not?” 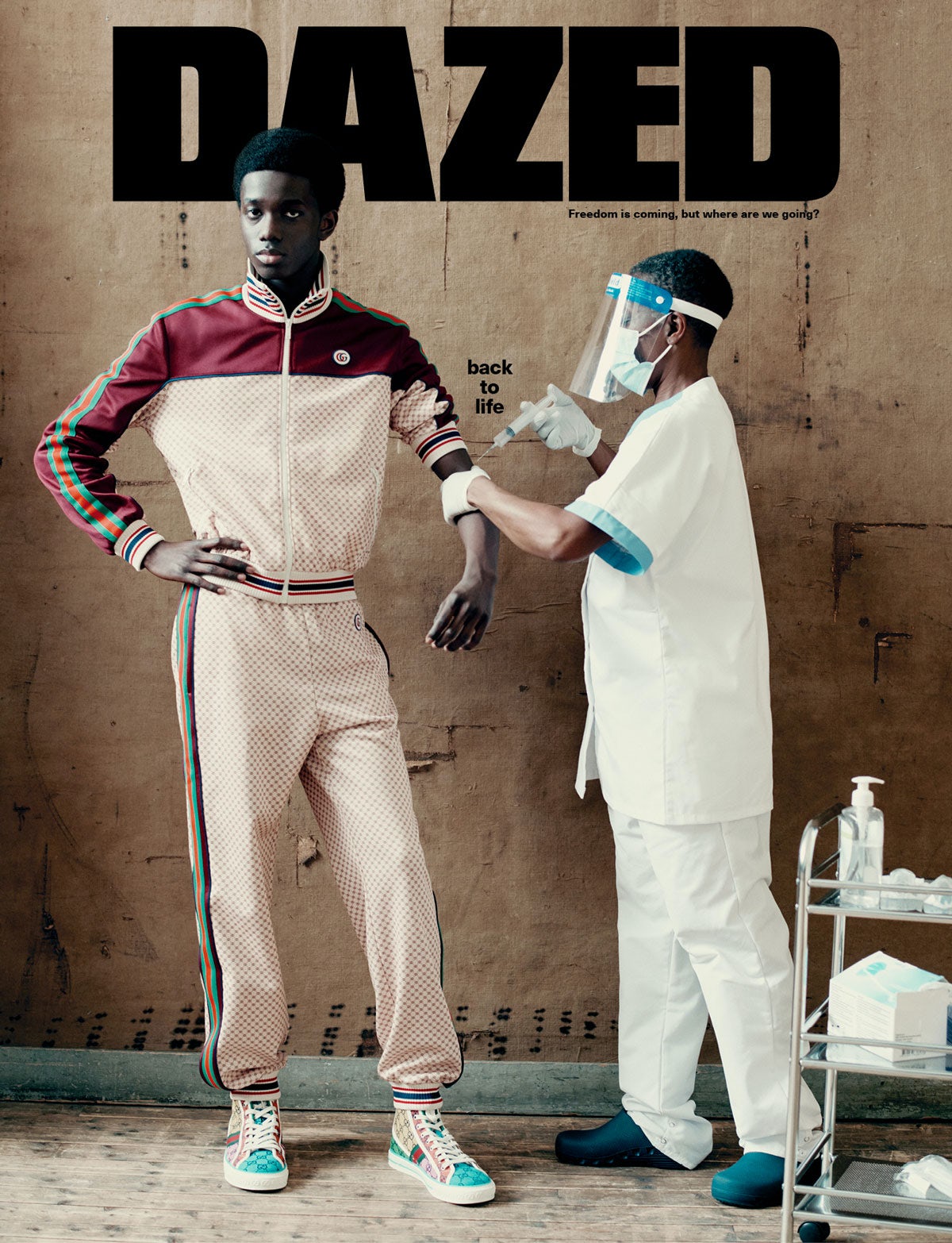 Dazed & Confused, Back to Life

“We were talking about this issue as a ‘National Geographic for global youth culture’ and what that could mean,” says Kamara. “It just had to start with the pandemic and the vaccine – a global problem and a global solution. How do we create around this? It’s this ‘somehow’ – the idea that, against all odds culture will find a way – that makes 2021 such an inspiring and historic year.” 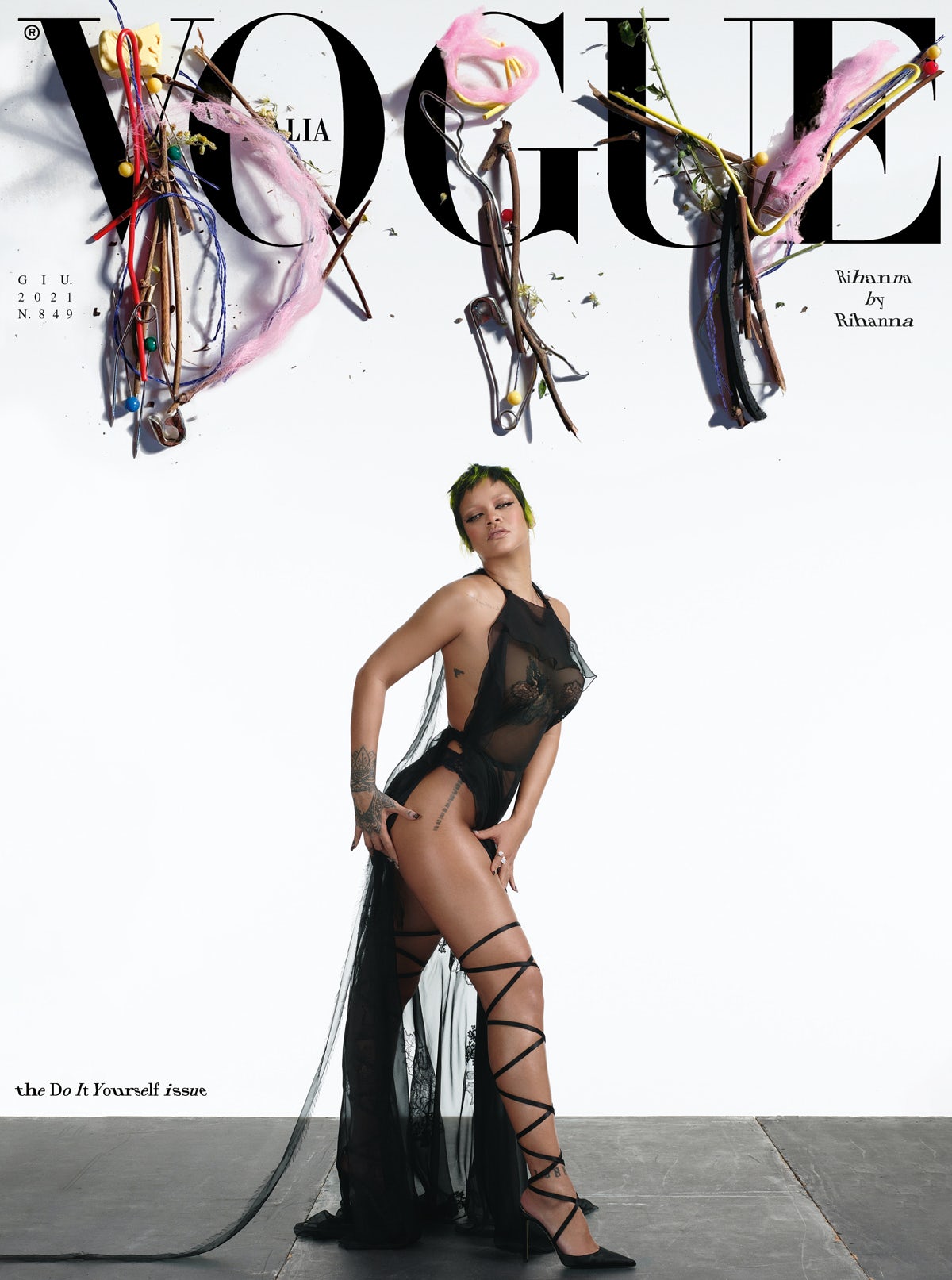 Vogue Italia, The Do It Yourself Issue

A Rihanna mag cover is always guaranteed to make a splash, but the team at Vogue Italia took things one step further when they asked her to take the reins for its Do It Yourself issue. Operating as stylist, muse, project director and photographer, the cover sees the artist adorned in a tantalising Valentino dress and thigh-high lace-up heels. Meanwhile, creative director Ferdinando Verderi’s whimsical collage amalgamation of paper clips, twigs, plant stems and thread overlaid on top became the perfect tribute to the art of DIY. 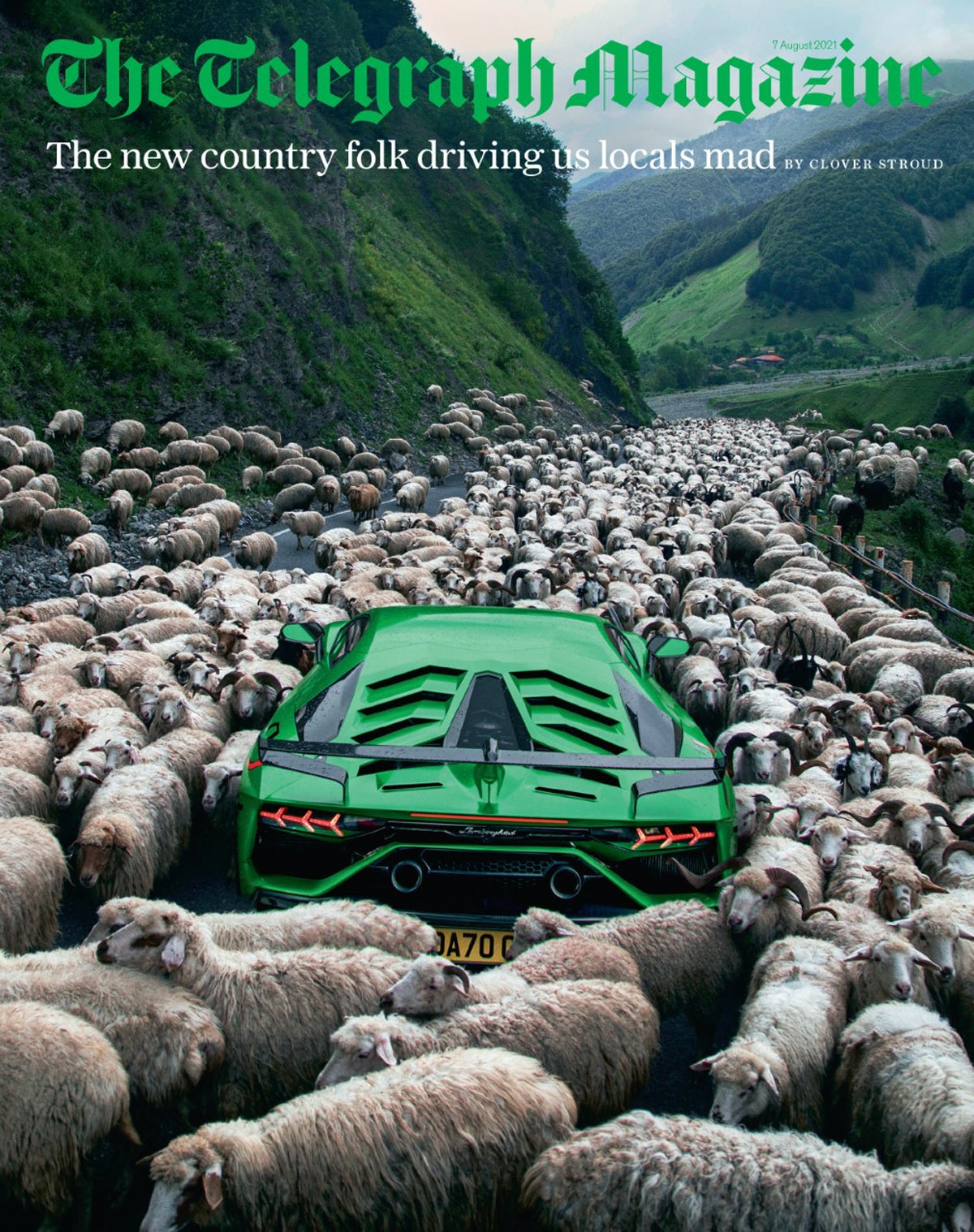 “City slickers are flocking to rural spots in search of the ‘simple life’. But it’s ruining the magic. The reality of country life is much muddier, bloodier and noisier – and my fervent wish is that it stays that way,” wrote Clover Stroud in a piece for the Telegraph Magazine earlier this year.

One of the various societal phenomenons brought about by the pandemic, Stroud’s comment on the paradox of city dwellers upping sticks for the countryside was brilliantly illustrated with the issue’s cover. The image of a sickeningly bright green sports car transplanted into the middle of a flock of sheep was brought to life by CG artist and photo-illustrator Justin Metz. 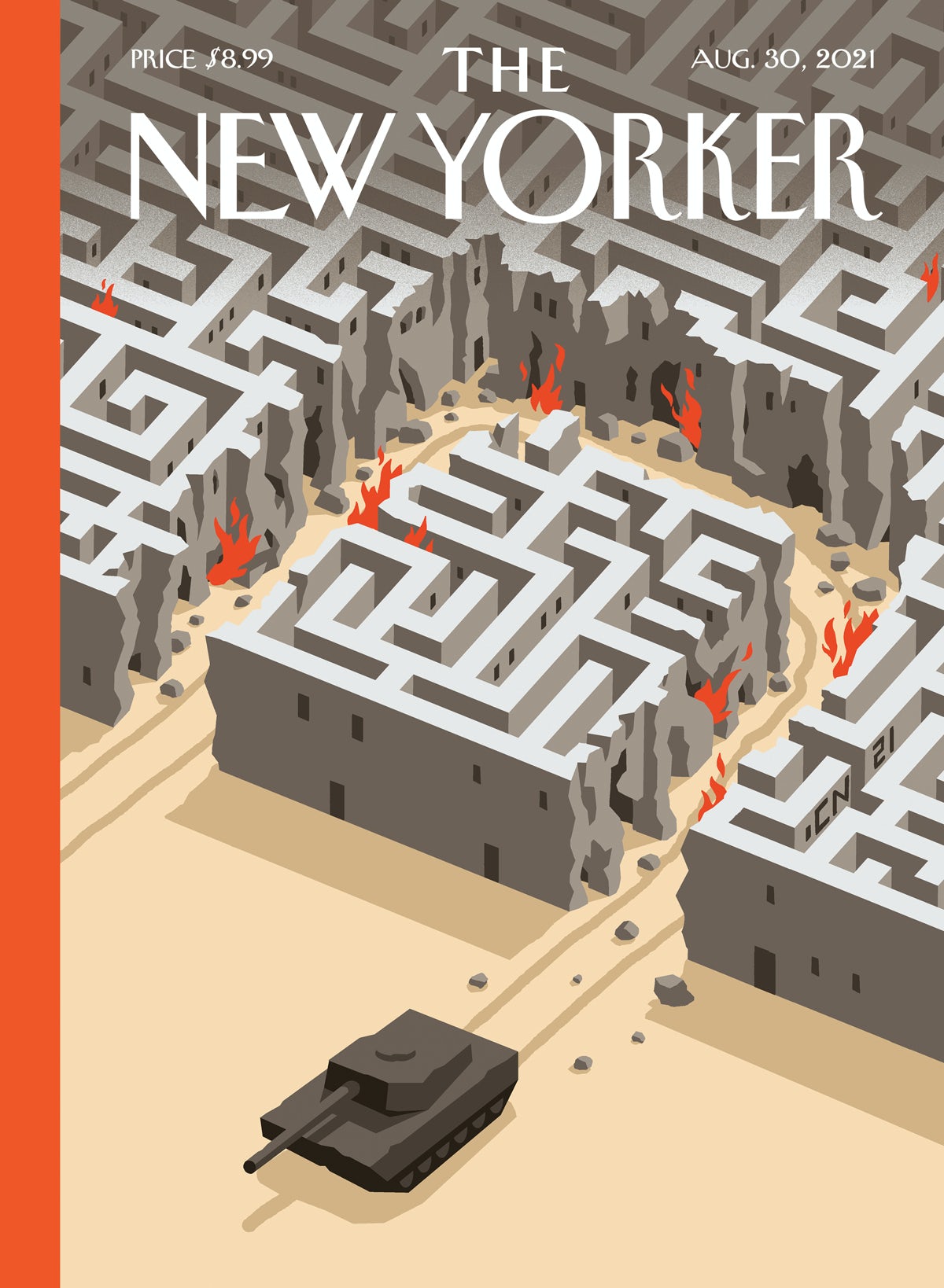 America’s two-decade-long misadventure in Afghanistan came to a bitter end earlier this year, when the Taliban entered the country’s capital Kabul and toppled the government just weeks before the official US withdrawal date. In his latest cover for the New Yorker, illustrator Christoph Niemann took on the ambitious task of capturing the roots of America’s failure in Afghanistan in a single image.

“I try to focus on visual metaphors, even though, in this case, the maze would also work as a verbal metaphor,” said Niemann of his approach. “I wanted to show two systems that are utterly incompatible — a state backed by a foreign military can’t be built in a complicated and fractured tribal society.” 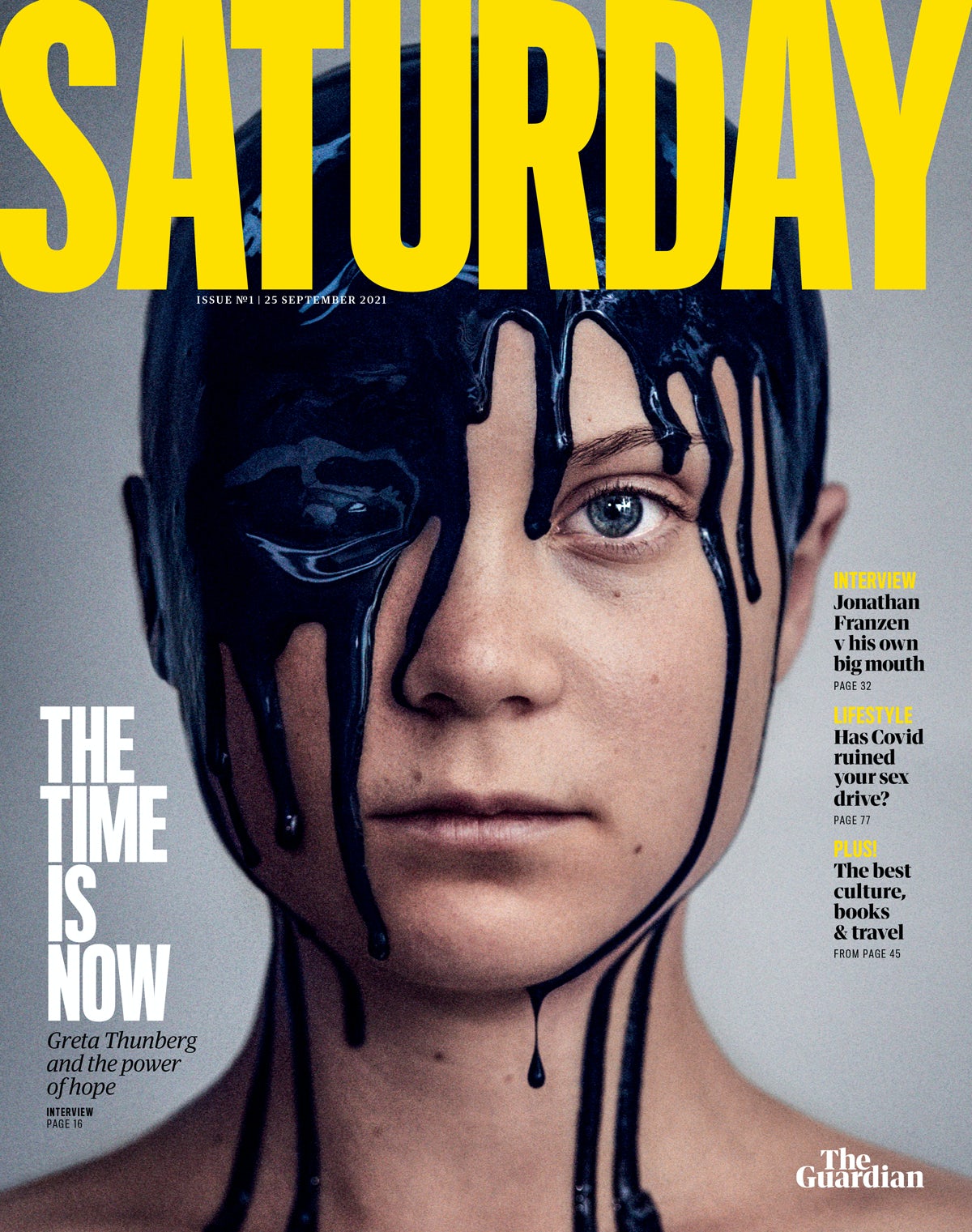 Following the sad news that the Guardian Weekend supplement was folding this year, the publication’s design team was tasked with creating the new, larger-scale Saturday magazine. The launch issue featured three alternative covers, but the standout cover star was undoubtedly Greta Thunberg.

Dropping ahead of the landmark COP26 conference on climate change, the cover image by Jeremy Strong saw the climate activist transformed into a human oil spillage, as an unidentifiable treacly black substance dripped from her hair, down her face and on to her neck and shoulders. 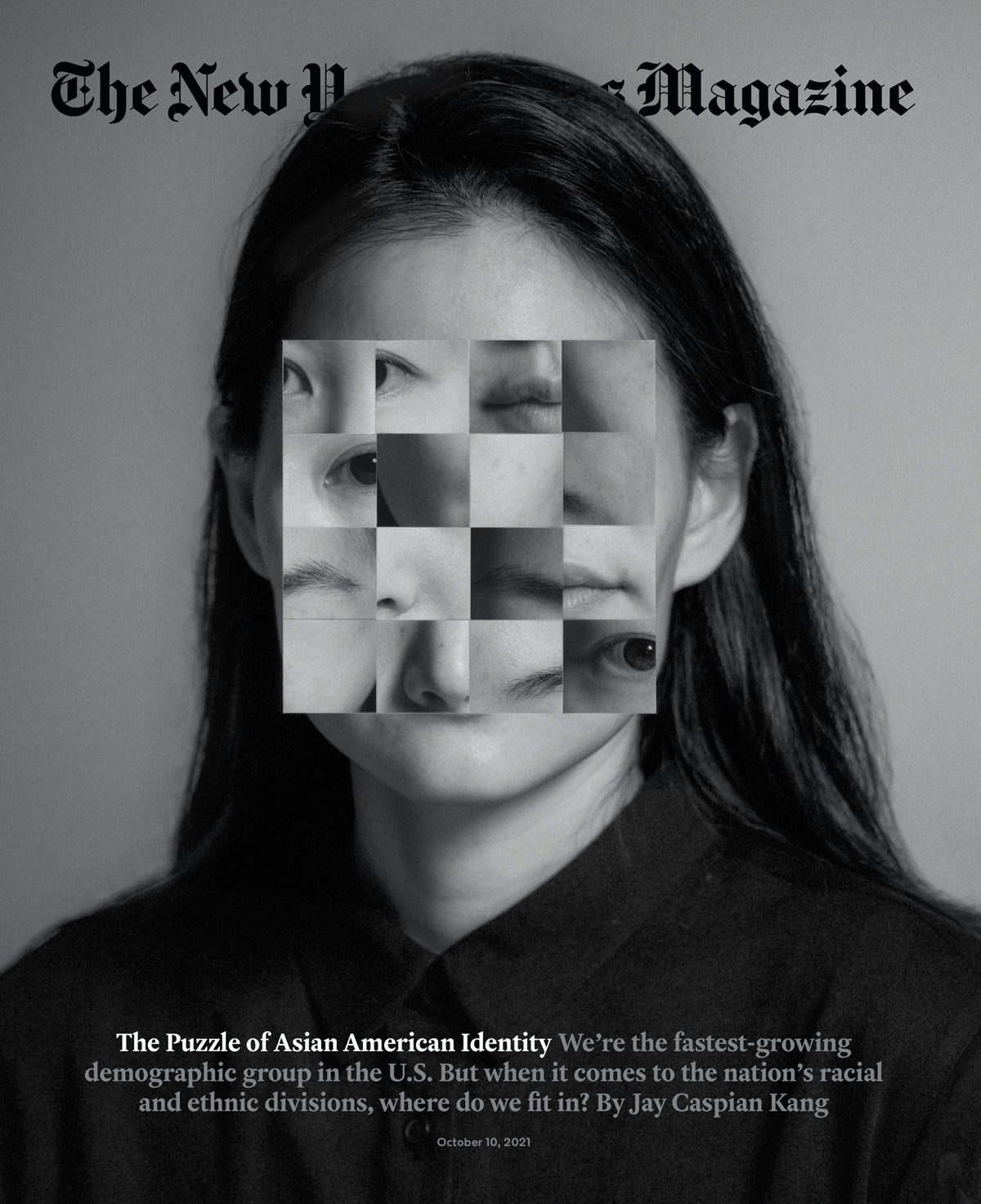 It wouldn’t be a best mag covers round up without a nod to the stellar work of the design team at the New York Times Magazine, and this year is no exception. One of the publication’s most impactful covers of the year addressed the puzzle of Asian-American identity – the fastest-growing demographic group but also one that faces a huge amount of discrimination amid the country’s racial and ethnic divisions.

For the cover, a black and white photo taken by Asian-American photographer Tommy Kha was painstakingly transformed into a puzzle-like collage by artist Kensuke Koike – perfectly illustrating the subject matter in a way that all great magazine covers do.