As part of its Your Space or Mine project, the Build Hollywood agency family, which is made up of Jack, Jack Arts and Diabolical, has collaborated with Turner Prize-nominated artist Mark Titchner for a series of billboard takeovers across the UK.

The Your Space Or Mine project gives artists and creatives a platform on the street, and Titchner’s colourful, typographic piece, titled Please Believe These Days Will Pass, is a “rallying cry for hope” and a bid to boost morale. With many of us still only leaving the house for essential food shops and daily exercise, the piece aims to be a welcome break from the “monotony of our current situation”. 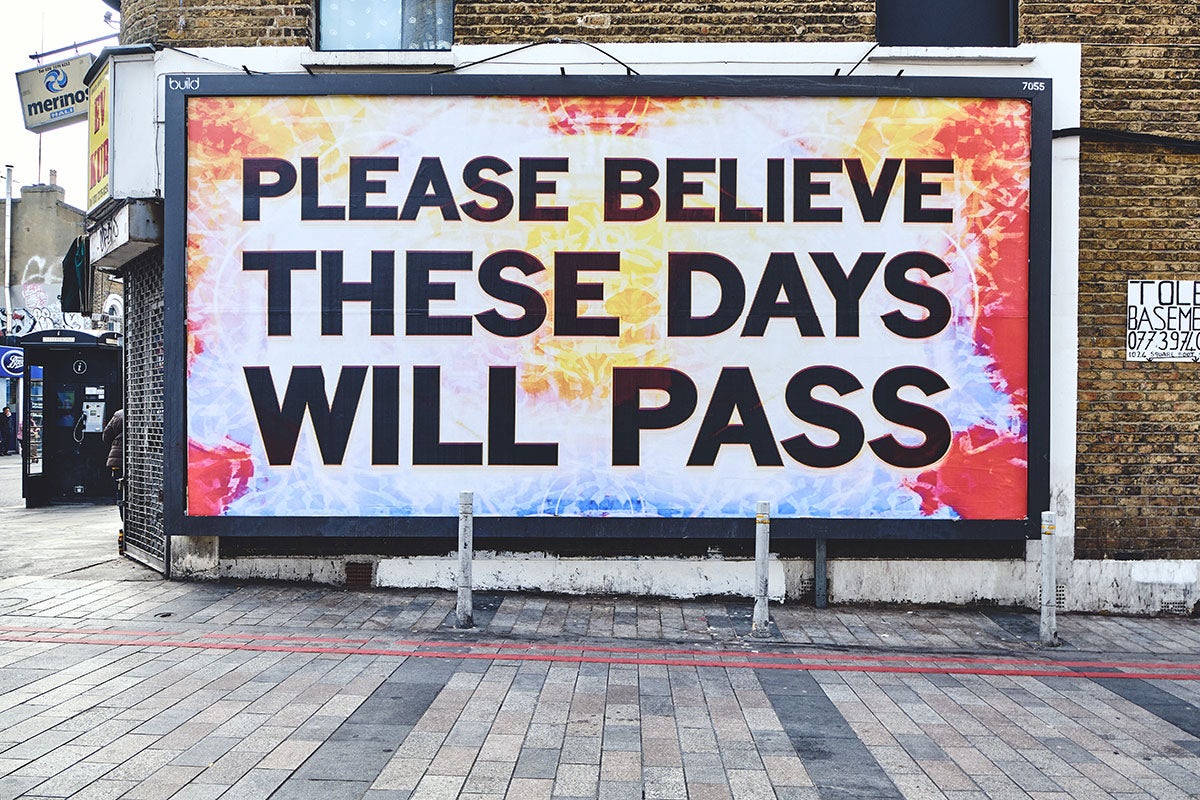 The piece is an updated iteration of an existing artwork by Titchner from 2012, as the artist felt the sentiments were more pertinent than ever. For the 2020 version, Titchner has redesigned the text in a poster format, adopted a block font and adjusted the colour palette to create a contrast with the grey buildings the billboards often sit between.

“When the words ‘Please Believe These Days Will Pass’ first came to me in 2012 who could imagine the ‘days’ that we find ourselves in now? My thinking at the time was a message to help one endure through difficult times, but also a reminder to cherish what is good in the here and now,” explains Titchner. “It’s what is good, such as the bravery of those working so hard on our behalf in the NHS or the safety of our loved ones, that will get us through when the endurance runs low. I’m very thankful of the opportunity to share these words again in sites across the UK and hope as we all do these days will pass before too long.”

Titchner’s work often explores words and language, and more and more has been placed in public spaces not typically connected with the art world. His 2018 piece Me, Here Now for instance is now a permanent installation at London Bridge Station. Working with a number of media including digital and print, Titchner is often drawn to motifs from advertising, religious iconography, club flyers and political propaganda.

“I really like the idea of people coming across it and not knowing what it is,” Titchner says in a short film that’s been released as part of the project. “It’s not framed as a piece of art, so is it a protest poster? Is it an advert for an evangelical church? For me, it’s just part of the fabric of this shared space.”

While the phrase Please Believe These Days Will Pass can initially feel flippant or reductive, the simple repetition of it being plastered on billboards feels powerful, like a 20ft mantra on your daily walk. This arresting presence is a conscious move by Titchner. “I’ve tried to think about what someone can take on board as they pass by. So I tend to use short, sharp words,” he explains. “The whole atmosphere of the work is supposed to be like a voice, someone addressing you in a certain way. It could be helpful, it could be aggressive, it could be a friend.” For the artist, this faceless voice, accompanied by a sunset-coloured backdrop, creates a sort of temporary escape from the day-to-day.

The posters will appear on billboards across ten UK cities including London, Manchester, Brighton, Sheffield, Birmingham, Bristol, Glasgow, Edinburgh, Sheffield and Cardiff. As part of the collaboration, the poster artwork has also been made downloadable for people to print out and display themselves.