In a week where Viva La Vulva, Libresse’s hilarious and joyful celebration of lady parts, has picked up yet another award – D&AD’s highest accolade, the Black Pencil – another brand has shown that advertisers can still seriously mis-step when it comes to addressing women.

NatWest launched a new set of ads this week that are specifically targeted at women and pledge to “lead the change in the way banks talk to women”. The campaign includes a partnership with Stylist magazine on an initiative titled A Women’s Worth Collective, which aims to address women’s concerns around money and banks, and “answer your questions and calm your fears”. 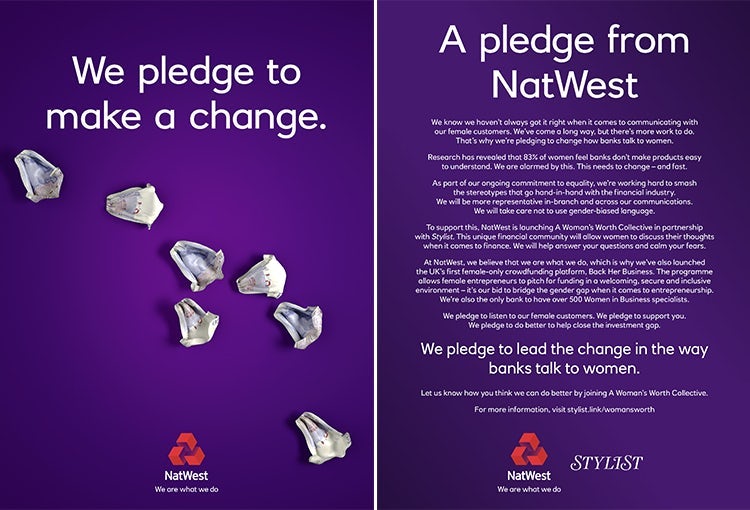 It all launched with a PR stunt earlier this week where men dressed as old-fashioned bankers presented letters of apology to commuters for “patronising you, ignoring you, talking to your husbands, fathers and brothers instead of you and making far too many suggestions that your earnings and expenditures are meaningless and trivial”.

Unlike the response that the bank was presumably hoping for, the backlash to the campaign has been swift and devastating, with both women and men taking to social media to call out NatWest for – spot the irony here, folks – mansplaining and being patronising in its approach.

So how did we come to this? As ever, when a piece of downright clunky advertising is released, one wonders how nobody stopped it along the undoubtedly lengthy journey of its creation. Yet, according to Emma Issac, NatWest’s director of brand marketing, in an interview with Marketing Week, the bank expected some negative feedback from the outset.

“[The campaign] is courageous and with courage comes vulnerability,” she says. “We acknowledged this could come with some polarised views, however it is only the beginning, we are committed to the campaign as much as we are committed to becoming the bank that is really leading the change in the way we talk to women.”

Herein lies the danger of much purpose-driven advertising: that bad messaging can easily be mistaken for being ‘brave’ and this then presumably drives out any dissenting voices during the development process. 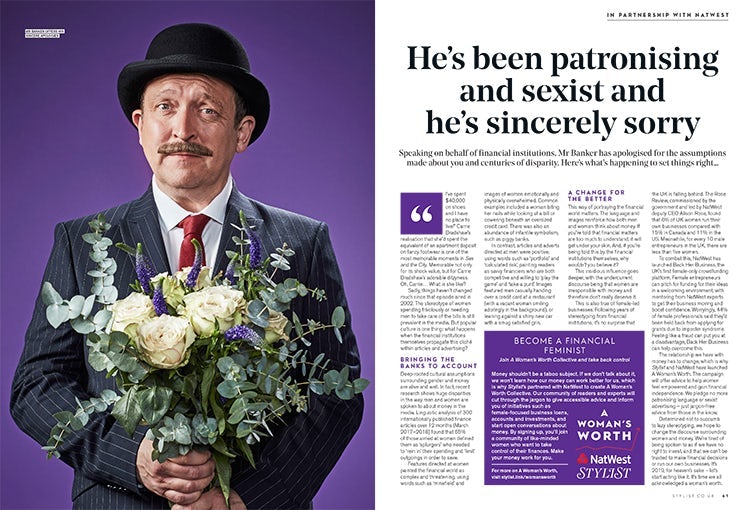 The major frustration I have with the campaign – beyond the awkward phrasing, the stereotyped imagery (the Stylist cover wrap features a bunch of flowers with the petals made of bank notes) and the condescending tone – is that at the heart of it, the bank seems to have fundamentally missed the point of why women may have an issue with the banking system.

NatWest quotes a statistic – that 83% of women feel that banks don’t make products easy to understand – as the reason for this new tone, and in doing so suggests that the problems that the brand has are not with its products (which I bet confuse a fair amount of men too) but with women’s comprehension of them. Instead of making their systems and products more transparent and straightforward, NatWest seems to be saying that they just need to talk more loudly and slowly to women about them.

The bank also references its past, and the fact that it – along with all banks – used to insist on only talking to men. Here again, it appears to miss the deeper cultural point.

Historically, there is a long tradition of women managing the family finances. Women have not – as an entire gender – had an issue with understanding money and figures, they have had an issue with autonomy and independence. And it was this latter point that banks exacerbated in the past by refusing to allow women to have their own bank accounts. This was not an action made because women could not ‘understand’ money (even if that may have been the excuse given), it was an action of control.

It is a sad that a campaign – presumably intended to do the opposite – evokes these spectres of the past, instead of demonstrating how much better the world of banking is for women today. And in a sector where modern fintech brands are chomping at the heels of these old-fashioned institutions (can anyone imagine Monzo making this campaign?), it feels a hideous blunder.