Back in 2010, Peter Saville designed detailing for a new shirt for the England football team on behalf of kit suppliers Umbro. To the delight of some, and the deep annoyance of others, his design featured a pattern made up of tiny St George crosses in various colours. The crosses were scattered across the shoulders of the white home shirt, though a special edition version featured them across the whole garment.

Fast-forward to 2018 and the Rugby Football Union announces its New England shirt, produced by Canterbury. This design also features a multitude of St George crosses, again in various colours. According to the RFU, “The design, which creates a disruptive [does everything have to be “disruptive now?”] and textured effect, uses a variety of St. George’s crosses, reflecting patriotism and incorporates platinum and titanium colours symbolising the strength of those metals.” 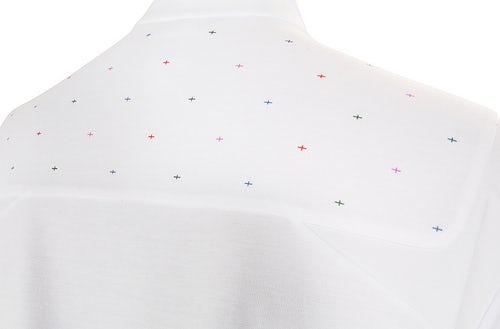 Talking to CR at the time of his England shirt’s launch, Saville explained his use of the pattern (which he designed with long-term collaborator Paul Barnes of Commercial Type and which was partially inspired by Saville Row tailors introducing micro-patterns into cloth) thus: “I was frustrated, along with many others, by the marginalisation of the cross of St George. It has acquired connotations that some of us don’t associate with and I find that frustrating because there is nothing wrong with it as a symbol. [The design] is a provocation. It’s not negative, it’s not aggressive, it’s not critical and I think it feels like England 2010. This is a country of lots of different people, get on with it.”

At the time, Saville’s design was described variously as resembling confetti, hundreds and thousands and a particularly exotic strain of dandruff. Let’s see what the rugby boys make of their version.