Music seemed easier in the analogue era. If you fancied some new tunes, you could head to a record shop and have a browse. If you were inclined towards art and design, you might even pick a record (or tape, or CD) by virtue of its sleeve alone, drawn in by the mysterious artwork to hear what music lay behind the visuals.

Without wishing to sound like a Luddite, it’s easy to see how some of the magic of this process has been lost in the digital age of algorithms and streaming. And I’m obviously not alone in this, as proven by the recent resurgence in vinyl.

Arriving to bridge the gap between the 70s era of playing records and today’s digital first approach is a new app designed by the tech wizards at Wieden + Kennedy Amsterdam’s in-house creative shop the Department of New Realities. Titled Lava, the first launch under the new platform transforms the tracks on SOS – the debut album by the artist Necessary Explosion – into 11 psychedelic AR sculptures, specifically designed to bring to life the soulful, 70s vibe of each song as you listen.

The hope is that the AR experience will bring back some of the more ‘passive’ listening experiences of the past – where you might casually study the sleeve artwork or watch a lava lamp while listening to a record – that have been waylaid in the digital age.

“We’ve lost a little bit of that in our modern era, especially with the use of new technologies – it’s always demanding lots of attention,” says Geoffrey Lillemon, co-founder of the Department of New Realities, alongside Anita Fontaine. “We wanted to take the pace of 70s nostalgia and bring that into new technologies, so that we could have augmented reality experiences that would grow out of your record in the same way that a lava lamp is this visual accompaniment – something that you can augment to your space to bring a little bit of that 70s magic into the music listening experience.”

“We feel like we’ve kind of lost that tangible element of music these days with a lot of the digital ways that people experience music,” continues Fontaine. “The loss of the beauty of the record sleeve experience of chilling in your living room and flipping through the artwork. How do we create a futuristic version of that? So people can really experience a variation of the artwork inspired by the music.”

In keeping with the 70s vibe, the app is ideally designed to be used when playing a vinyl version of the album on a turntable, where the music will prompt each song’s artwork to appear on a phone or tablet. The visuals – which in the case of the Necessary Explosions album feature a variety of “cranial explosions” – also vary depending on the user’s proximity to the player. However, in recognition that not every listener will have the required set up, the AR experience will also respond to hearing the music via streaming too.

Beyond this initial launch release, Lillemon and Fontaine can also see the potential for the technology to be used in a variety of contexts, both in the home and also in specific geo-locations where the music triggers a unique experience, or at gigs and concerts.

“I think we’re all ready for that next stage,” continues Fontaine, “even adding game play to a music video experience, and adding these new kinds of ways for people that are curious to discover music at home as a way of experiencing art. I feel like it straddles the genre of music videos and record sleeves and a lot of different things all mixed together to form a totally new way of experiencing music.

“There’s so much potential when you think about how you illustrate the lyrics, for example … you could actually see the lyrics play out in front of you. Because that was something really important to me when I got a cassette or a CD, I would scan the lyrics and read everything. Imagine if there was a way to visually experience that, it would be really cool.” 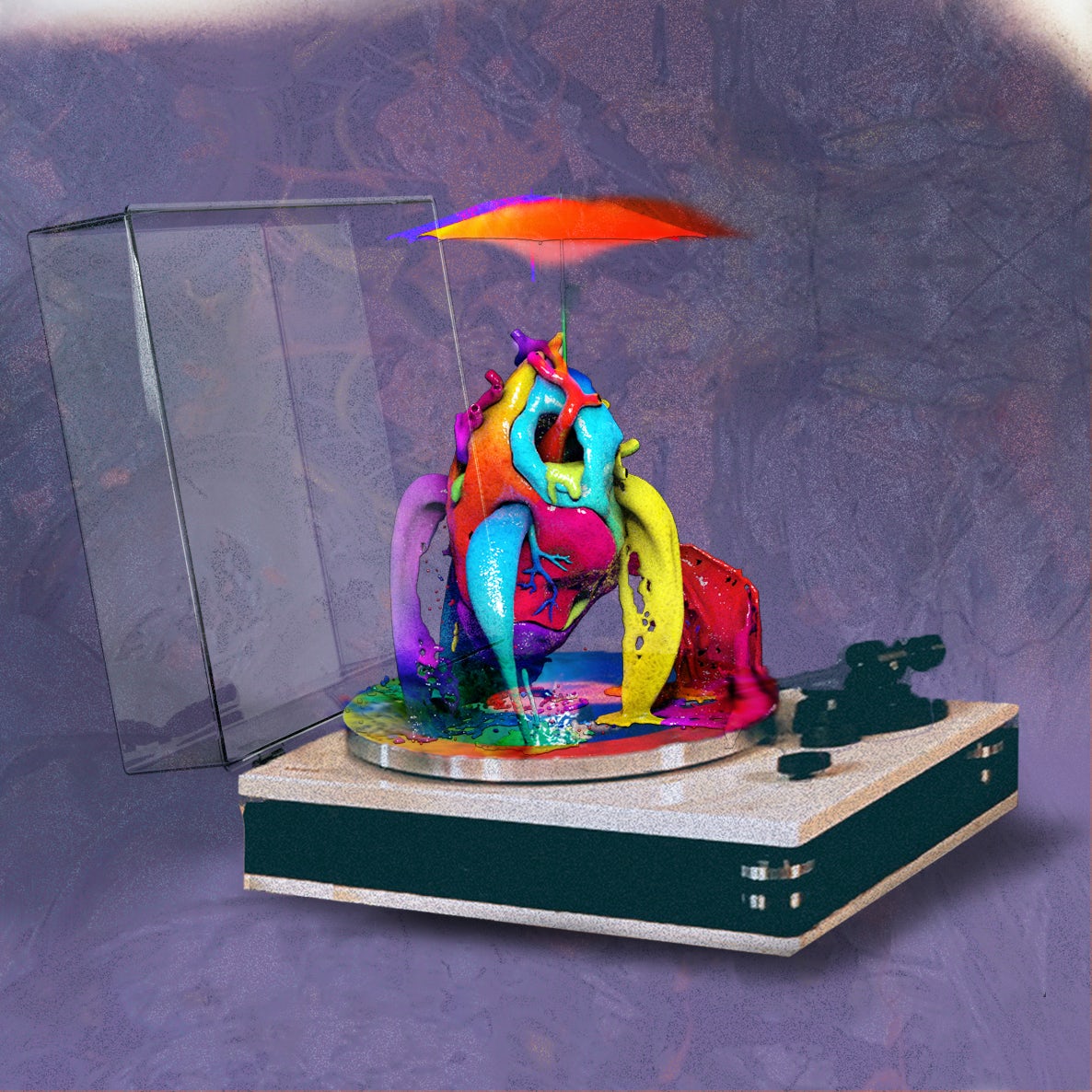 At gigs, where phones are often seen as a negative, using the Lava platform could potentially see them bringing people together. “The system is basically audio analysis that triggers augmented reality content so if you think about that in a show context and things like that, we could design stage sets and environments into the phone that could be designed for different musicians or different experiences,” explains Lillemon.

“It could be whenever it detects the stage everybody’s phone just turns red. Then we’re dealing with the crowd as the light source from their phones.”

“I feel like it’s a bit of a missed opportunity since everyone is holding up their phones at these concerts anyway,” says Fontaine. “People are already starting to think about this but that space I think is about to explode with augmented reality content. It’s the perfect medium for mad shows.”

The artist behind Necessary Explosion is Wieden + Kennedy Amsterdam ECD Mark Bernath, and Lillemon and Fontaine acknowledge how helpful it was to have a supportive collaborator on board during the complex development of the app.

“That was a definite reason why we went this release because we just wanted the first experience, which was initially just going to be a prototype, to be with an artist that we were in close range to, just so we could basically make the back and forth between us and the artist much easier,” says Fontaine. “Because it’s such a new field, we needed a lot of back and forth with Mark in regards to the interpretation of his music. He had a lot of opinions about the sculptures, and brought a lot of different elements so it was the almost perfect opportunity to have him in-house with us.”

At a moment when audiences are actively keen to find ways of using digital to enhance their lives rather than distract them from them, Lava appears timely. It will be fascinating to see where the team take the platform next: as well as for artists and labels, they also see potential for brands to create music-based experiences using it too.

“It’s the idea of how can we think about experiences that are aware of your environment and are designed with a sensitivity for enviornments,” says Lillemon. “It’s not, ‘look at your screen and experience this technology overload’. It’s really an accompaniment to the same ritual that you would have had in the past of listening to a record in this case and it just being an addition as opposed to an overtake. That’s really important with our philosophy on this – it’s just to make something that you can look at a little bit, then you can go get a cocktail and listen to the music, then experience it a little bit more. That’s a pace that we’re attracted to.”

“It backs up our philosophy of wanting to heighten your reality as opposed to trying to distract or overwhelm you with this new technology,” agrees Fontaine. “We’re using it in a sensitive way – I guess it’s the opposite of making something that’s really hyped. We’re trying to add something to people’s experience that is a bit different.”

Lava, and its first release, SOS for Necessary Explosion, are available to download from iTunes now