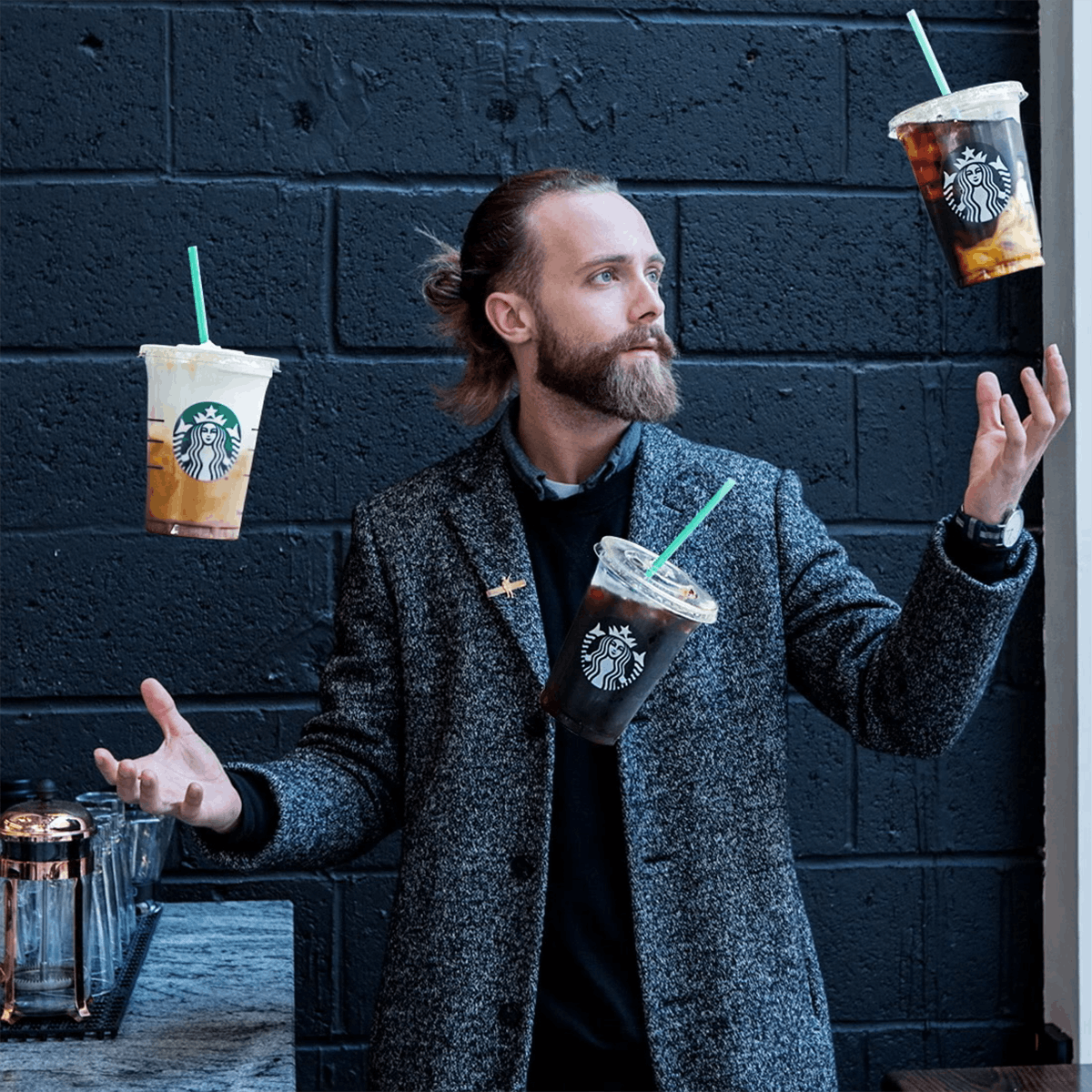 Mario Sahe-Lacheante began creating cinemagraphs (still images with animated elements) in 2015. “The first cinemagraphs I saw were probably three or four years ago … I remember the feeling of being intrigued by these ‘still’ images that had a model’s hair blowing in the breeze, or a glass of wine swirling round and round [in] a shot of a set dinner table,” he explains.

He downloaded a cinemagraph programme a couple of years later and made 50 in just a few days using old video clips. He has since created images for The Outnet, Land Rover, W Hotel and the United Nations as well as Harley Davidson and cider brand Old Mout.

His images are mostly created for social media. Animated elements – such as twinkling lights, moving vehicles or flowers blowing in the wind outside a London pub – provide a moment of surprise as viewers spot the motion in an otherwise static image. These elements also ensure Cinepix’s images stand out on visually noisy platforms.

• Turned Around • Fresh perspective on an older shot. ———————————– [#fatalframe][#streetshared][#streetmagazine][#streetmeetina][#gilaurbex][#urbexpeople][#fartoodope][#uncalculated][#twgrammers][#illkillers][#shotaroundmag][#shot2kill][#killergrams][#instamagazine_][#theoriginalgangsters][#hypekillsmag][#fragmentmag][#instamobz][#rsa_light][#the_best_shotz][#igshotz][#talent_alert][#pocket_family][#ig_4every1][#shotsofresh][#click_vision][#Cinemagraph][#cinepix][#londoneye][#timeoutlondon]

Sahe-Lacheante has noticed a growing demand for cinemagraphs among advertisers in the past couple of years. “There’s also ongoing market research happening [at] various brands … to understand the potential of using the medium in advertising,” he explains.

“More and more bands are keen to start experimenting [with the format] and I think it will continue to grow over the next few years, especially as we’re seeing more and more digital advertising space in our cities,” he says. “Most of my commissions are still aimed at Facebook and Instagram but the tide is slowly turning with more consideration given to [digital out of home advertising].”

Cinemagraph scenes… • … of a gust of wind outside a flowery pub. ———————————– [#twgrammers][#iglobal_photographers][#fragmentmag][#igpodium][#shutup_london][#toplondonphoto][#ig_brilliant][#from_your_perspective][#london4all][#byfolk][#instamobz][#killergrams][#sonyphotogallery][#londonist][#all2epic][#londonlove][#londonbaby][#londonlive][#london_enthusiast][#londoners][#Cinemagraph][#vibesofvisuals][#london2017][#hypekillsmag][#ukphotographer][#gilaurbex][#londonsbest][#londononly][#londonisopen][#cinepix] @timeoutlondon @london

• City of Angels • London has more angels guarding over her streets this season. This time we're in Jermyn St, where the sparkles are just fantastic. Tag someone you'd love to spend Christmas in London with! ????????????✨

Making cinemagraphs allows Sahe-Lacheante to combine his interests in lighting, filming, editing and photography. He was a cameraman and DOP before creating cinemagraphs and has worked on BBC Question Time as well as TV shows in his native South Africa.

Describing his process, Sahe-Lacheante says: “I plan each shot like a photograph and execute it like a film. Because of the video element I can’t use flash strobes, for instance, so it’s down to using some film techniques to execute the shot, even if I incorporate photographs.” Footage is then edited using Cinemagraph Pro before colour grading and further editing is done in Photoshop. “If the shot includes any advanced techniques or effects I would also work in After Effects to create those elements.”

There are some key differences between shooting stills and cinemagraphs. Cameras must be mounted on a tripod to give the impression of a “fixed photograph”. This means that cinemagraph creators aren’t able to continuously change perspectives and focal lengths in the way that a photographer might when shooting stills.

It is possible to change the composition of a shot without moving the camera but each shot usually has to be carefully planned in advance. “Each shot is set up with a specific focus and this might mean it requires a bit more consideration to try to capture the best shot. A photographer could shoot 20 different photos or more for every cinemagraph that I’d capture,” says Sahe-Lacheante. “Another limitation with shooting on a tripod is that some shots would be highly difficult, if not impossible, to shoot [for example, taking pictures on or under water],” he adds.

Photographers creating cinemagraphs are often required to learn new techniques: “Cinemagraphs are attractive to photographers for obvious reasons, but often photographers have limited knowledge about shooting and processing video, including lighting, colour grading and other special effects and programs, which might require a bit of a learning curve,” says Sahe-Lacheante.

• Which Brew for You? • Proud to have collaborated with @StarbucksUK on the launch of their new Cold Brew Selection. With a tasty selection of of three different cold brews, why not try them all? Expanding on the traditional Straight Cold Brew, you can now also try the silky smooth Vanilla Sweet Cream or the fresh Cappuccino Freddo. Watch them all swirl in deliciousness. ———————————– [#ad] [#StarbucksColdCraft] [#ColdBrew] [#CappuccinoFreddo] [#VanillaSweetCreamColdBrew]

“It’s also important to think about the final display platform. Stills are stills and will work regardless of where they’re posted but it’s different for cinemagraphs [as] the motion can get lost. So if a client is looking for Instagram-only content, it’s imperative that the captured motion isn’t too subtle because it will get lost on a mobile screen and people will scroll past it as if it were just a photo. The real magic is that thumb-stopping power when something stands out, so for social posts, the motion needs to be more pronounced. If the work were to go to websites, or other larger platforms, subtleties can work much better.”

Alongside working with brands, Sahe-Lachente has begun experimenting with cinemagraph portraits. “Much of my work to date has been product-focused, so I’m also enjoying bringing in more of a human element into my work,” he says.

• The Ruffle • Throwing back to a series of cinemagraphs I created a year ago for The Outnet. This cinemagraph was collaborative on a shot by the incredible Anthony Maule. Model: Manon Leloup. Top: Delpozo Trousers: Iris & Ink Clutch: Kotur

For the past few weeks, @flixelphotos have been running a competition to enter a shot as #MyFlixelMoment, for their upcoming #CINEMAGRAPH conference in NYC. This was my entry, depicting 'Freedom in the City' on a beautiful, one-of-a-kind Harley-Davidson. There's something great about having something fun you can do in the city, and look cool doing it at the same time, whether it's riding on a Harley-Davidson or jumping on a long board. So this is a tribute to urban freedom.

New Talent is part of Inspire, a year-long partnership between Creative Review, Facebook and Instagram showcasing outstanding creative work across both platforms. More advice and inspiration for creatives using Facebook and Instagram is available at www.facebook.com/ads/creativehub. You can see more of Mario Sahe-Lacheante (Cinepix)’s work at cinepix.london or follow him on Instagram (@cine.pix).