Nick Cave’s new exhibition is one of the earliest to open following the pandemic, and it seems like a particularly appropriate way to emerge from lockdown. The show, held at the Black Diamond in Copenhagen’s Royal Danish Library, had been postponed for several months as the pandemic took hold around the world. Having now opened, its distinctly lived-in aesthetic unwittingly holds a mirror up to the way many of us have been living for the past few months: faced by the inner recesses of our own worlds.

Stranger Than Kindness: The Nick Cave Exhibition is a labyrinthine journey through the musician’s life and creative career, as told through his extensive archive. The exhibition is structured into eight rooms, with each installation strewn with endless towers of books, along with drafts, original artwork, handwritten lyrics, diaries, photographs, videos, and found objects.

Altogether, the show features over 300 artefacts either collected or created by Cave, who contributed heavily to the curation alongside designer and Royal Danish Library curator Christina Back, and Janine Barrand of Arts Centre Melbourne.

“I was curious both about how he was a storyteller in his songs of course and in his novels, but also how he created these narratives about himself as a person throughout his career and recreated those narratives all the time,” Back tells CR of how the exhibition came to be. 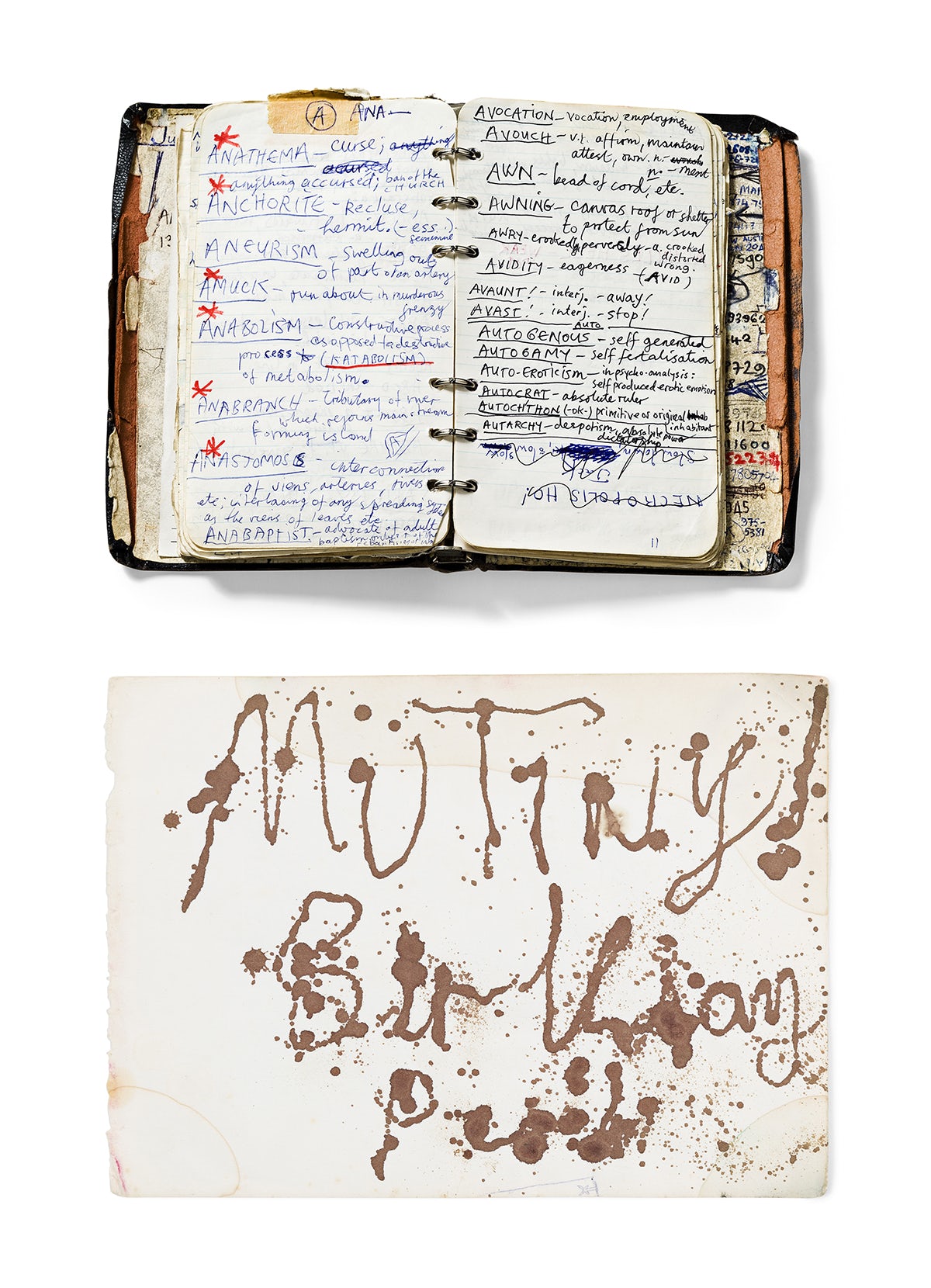 Cave is no stranger to giving fans a glimpse under the bonnet. Previous Nick Cave and the Bad Seeds albums have been accompanied by DVDs, hardcovers and replica notebooks, each revealing generous detail about the band’s inner workings. Elsewhere, Cave has hosted intimate public talks and, for the past two years, he has used his website The Red Hand Files as a direct forum for the public to ask him about his life and work.

Yet the artist and musician admitted he was initially hesitant about doing the exhibition. “When the Royal Danish Library contacted me with the idea of a ‘Nick Cave Exhibition’ I was reluctant to get involved,” he said in a statement. “I am not nostalgic by nature and I had no time for a trip down Memory Lane.”

However, Back says that Cave came around when he realised “the possibilities there were in creating spatial narratives”, and ended up becoming closely involved in the process. “I think that’s where he really found his way into it: where he could create these visual stories,” she says.

Back explains that curators are sometimes discouraged from interfering too much with the story an exhibition tells. However, with Cave serving as collector, curator and creator, it meant they could push the show in a novel direction – the likes of which Back rarely experiences. 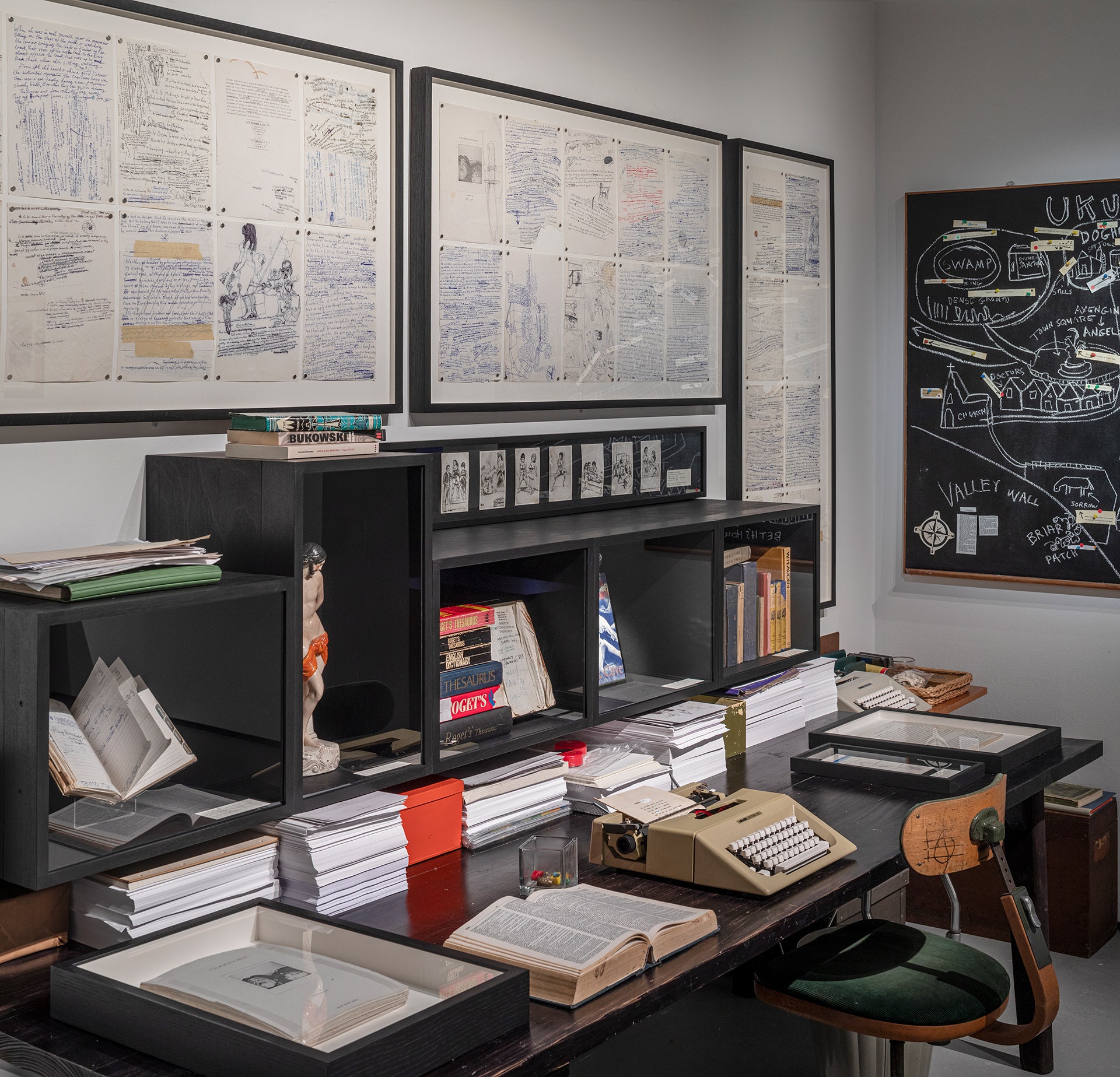 The exhibition is designed to draw a connection between Cave’s many artistic outlets, from his poetry, novels and writings to visual cues and, of course, his decades-long music career. Visuals and music are closely intertwined in Cave’s world (pictures made from blood, glue, hair and found objects are said to have inspired his songwriting), which is evident in the exhibition. Each of the eight rooms is accompanied by a soundscape created by Cave and Warren Ellis with the aim of building a multi-sensory experience.

The show also features two installations by Iain Forsyth and Jane Pollard, who directed the 2014 documentary-drama 20,000 Days On Earth, which they co-wrote with Cave and which depicts a fictitious 24 hours in his life. 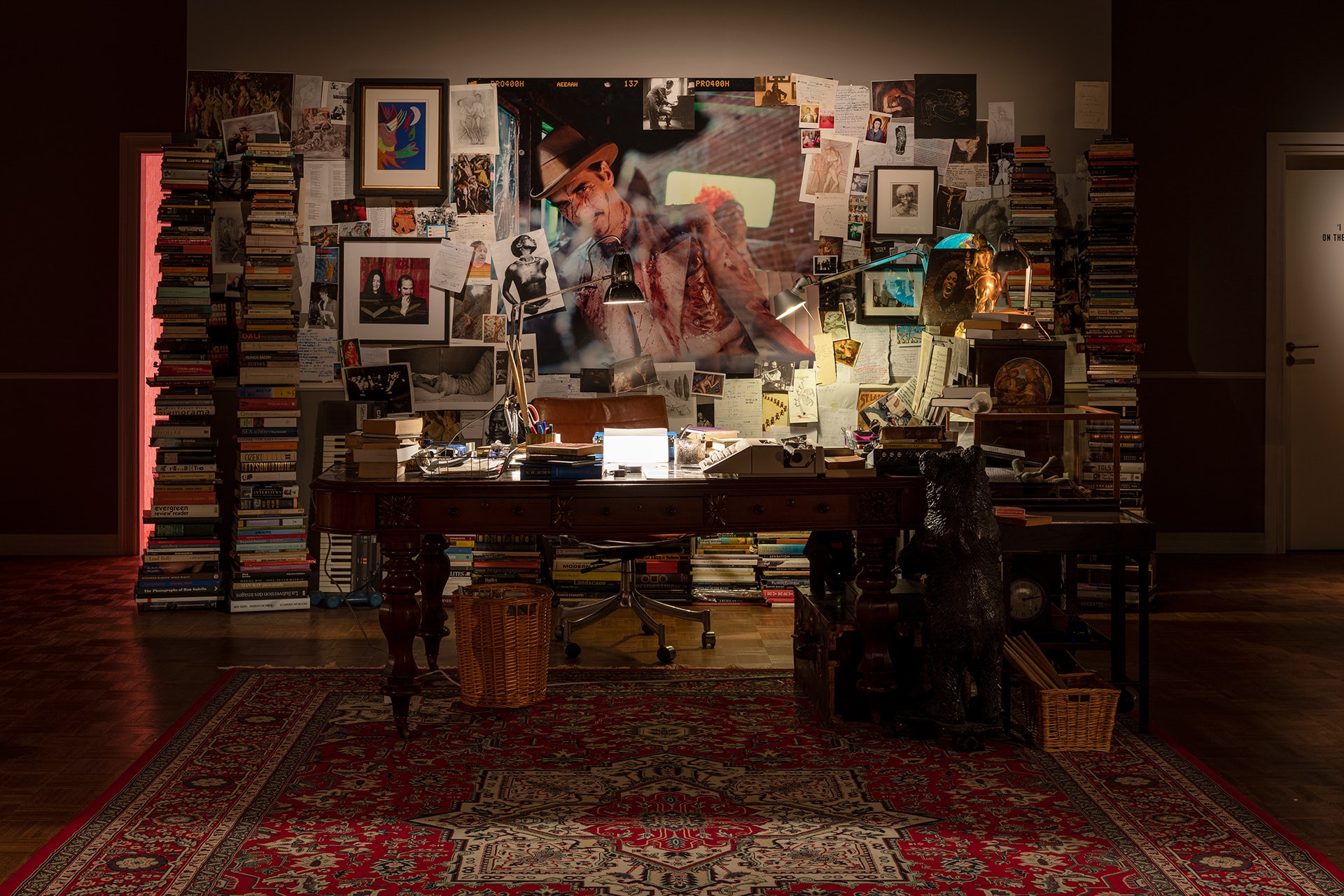 One of the biggest installations in the exhibition is the ‘office’, which is filled to the brim with material from Cave’s own home. “I borrowed all of his books – he has no books left!” Back says. “We moved I think almost 100 boxes of these books, his desk, his piano, images from his walls, and we recreated his office in an exhibition [format].” Visitors are invited to peruse his belongings and rifle through the pages of his notebooks.

Alongside the many books is a range of what Cave calls “secret and unformed” materials that factor into his published, official work. “There is an enormous amount of this peripheral stuff – drawings, maps, lists, doodles, photographs, paintings, collages, scribblings and drafts,” he says.

“We created an exhibition that feels unprecedented in its audacious reach, its feet rooted in the past while extending into the uncertain future,” he adds. “In the end we were able to put together an exhibition of extraordinary detail that commented on the fragile and vulnerable nature of identity.” 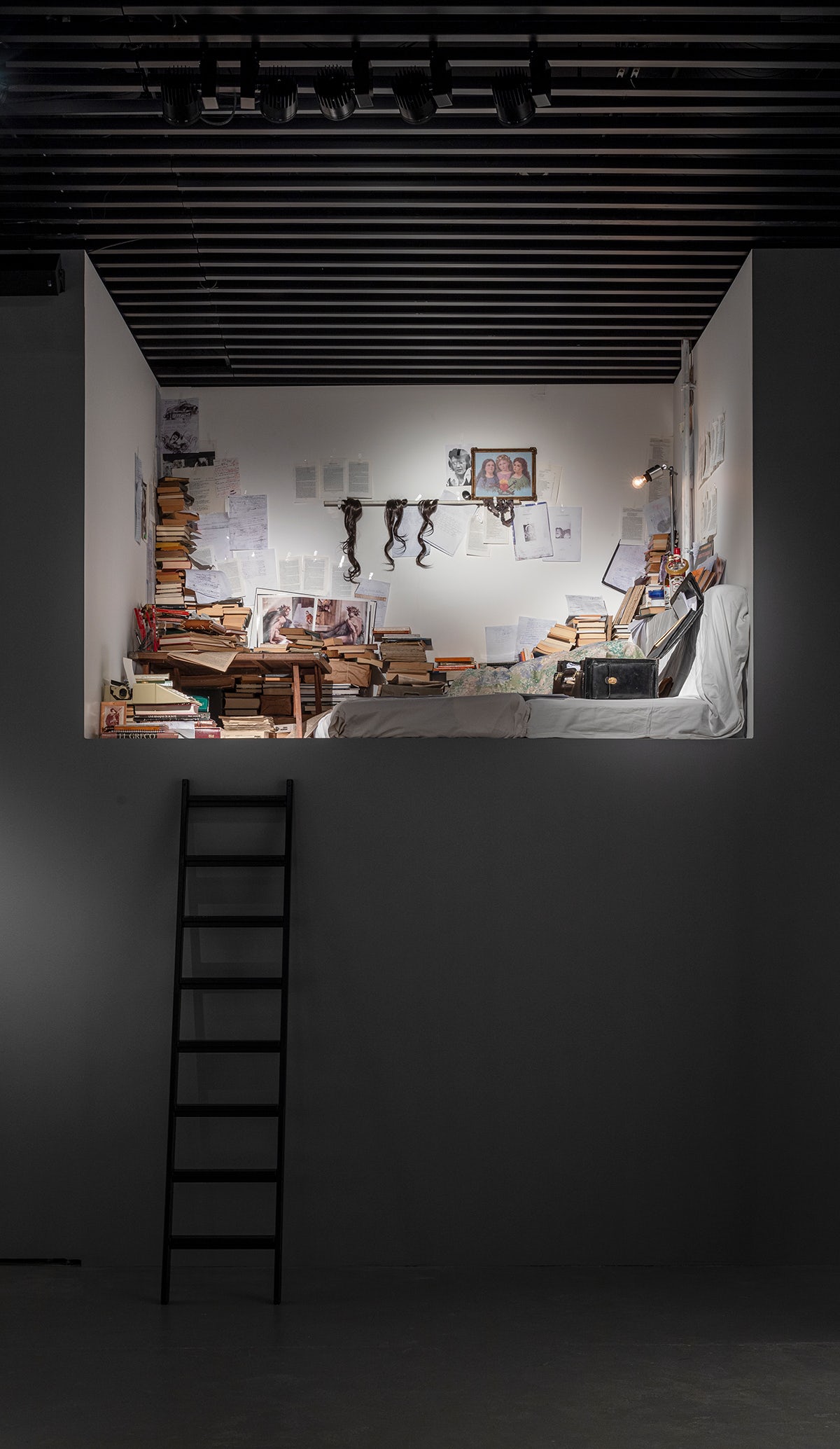 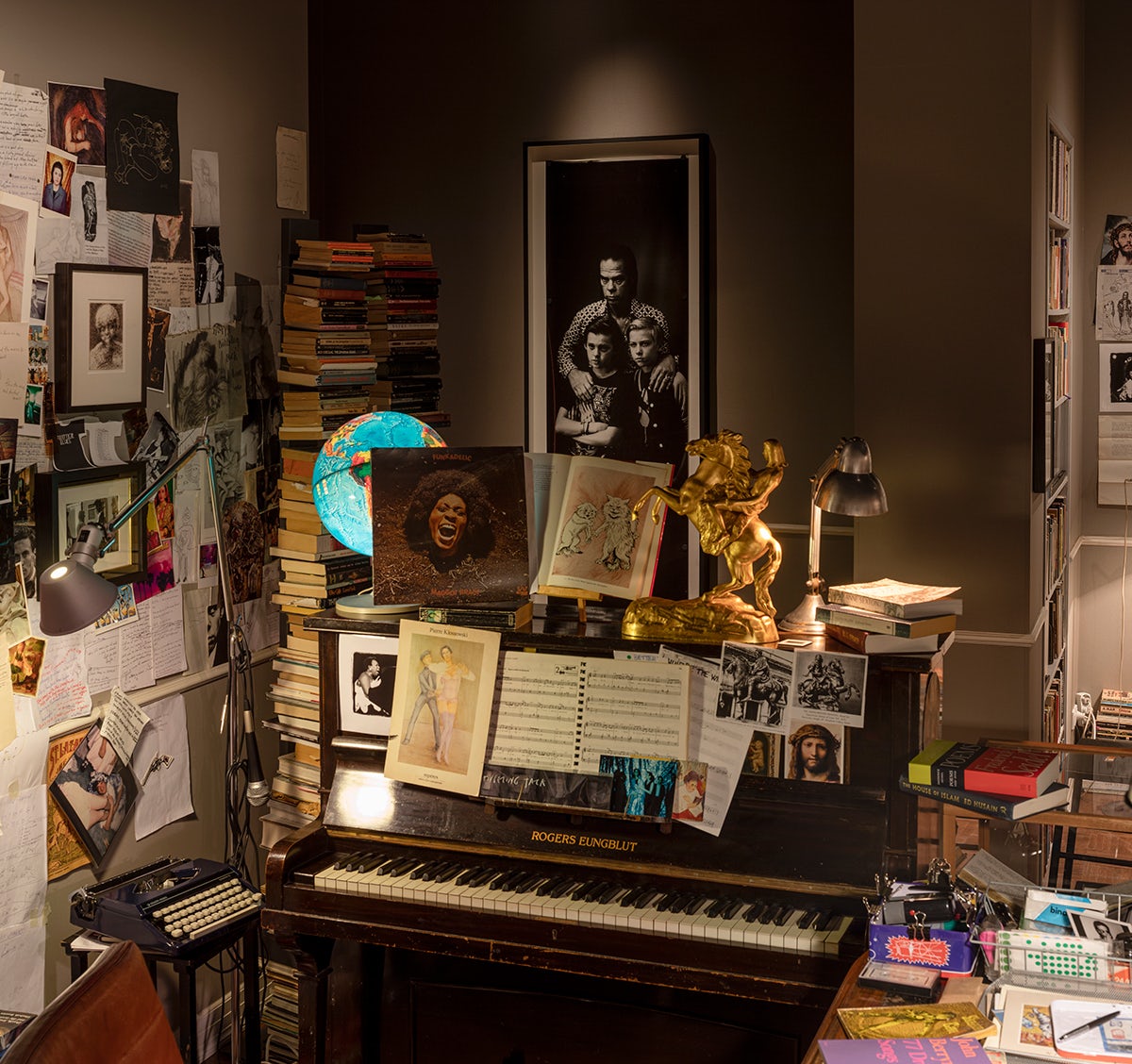 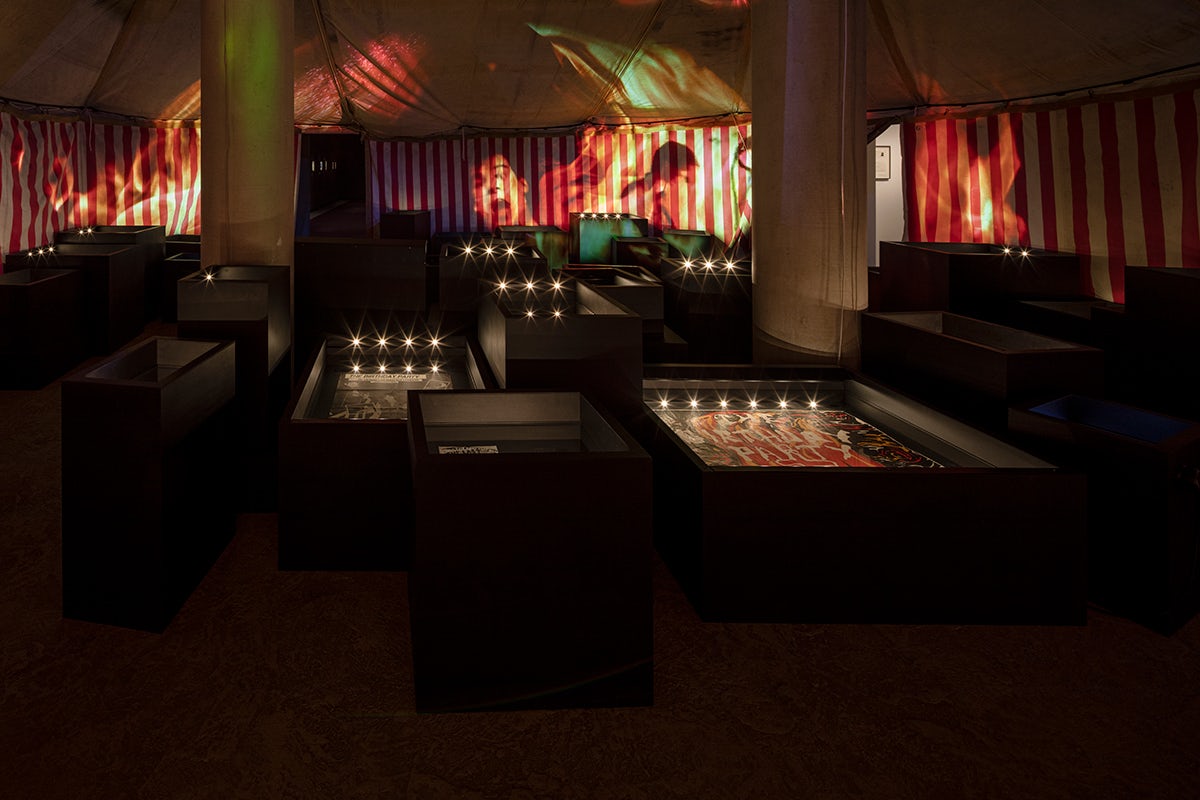 Stranger Than Kindness: The Nick Cave Exhibition runs at The Black Diamond, Copenhagen until 13 February 2021; kb.dk