Cast your mind back to 2018 and you may well remember a news story about ‘no mates’ Nigel, a gannet who passed away having spent the last five years living on New Zealand’s uninhabited Mana Island after falling in love with a concrete replica bird. The replica was planted as part of a fake colony by conservation workers to help lure real-life gannets to the island off the west coast of New Zealand, but didn’t quite go to plan when Nigel became besotted with his concrete partner instead.

The trials and tribulations of Nigel are the subject of a short film by Polish animation director and illustrator Natasza Cetner. A recent graduate from the RCA, Cetner’s work is typically characterised by scratchy line drawings and surreal scenes. “My works are mostly inspired by the absurd,” she says. “They are kept in quite a naturalistic style but are skewed towards a darker atmosphere in order to emphasise my inspiration coming from the unconscious.” 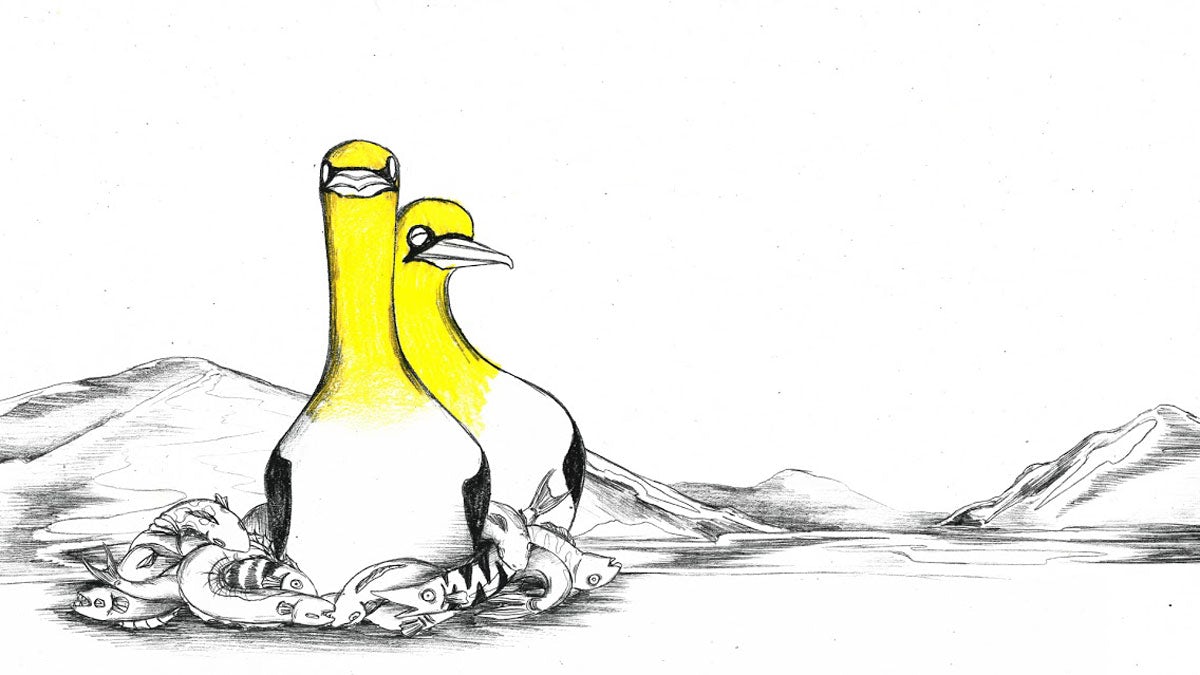 The idea for adapting Nigel’s story in animation form came from Cetner’s ongoing obsession with obscure animal stories, such as LGBT icon Thomas the blind goose. In Nigel’s case, the sad tale of unrequited love spurred her on to pay tribute to the late gannet. “What struck me in those news stories was how much people identify themselves with Nigel and his hopeless love story. All of us at some point have been in a situation where our feelings are not reciprocated, and we idealise the love to an extreme degree,” she says.

In the same vein as much of Cetner’s work, the film’s stark aesthetic looks to reflect the isolation that Nigel so willingly subjects himself to. She decided to take a number of artistic liberties when bringing the story to life, replacing the real-life conservation worker with an all-powerful walrus character. “By transforming the volunteer living on the island into a humanoid Walrus I was able to direct the film more towards the fantastical genre and away from the documentary,” she says.

Another key difference from real life is the decision to show the walrus character destroying the replica bird when things don’t go according to plan. “The message I attempted to convey was to talk about how we should be more tolerant towards those who choose the unorthodox way of leading their lives,” Cetner explains. “What strikes me about the current world is how many people impose and force their opinions upon others whose viewpoints do not match theirs.”