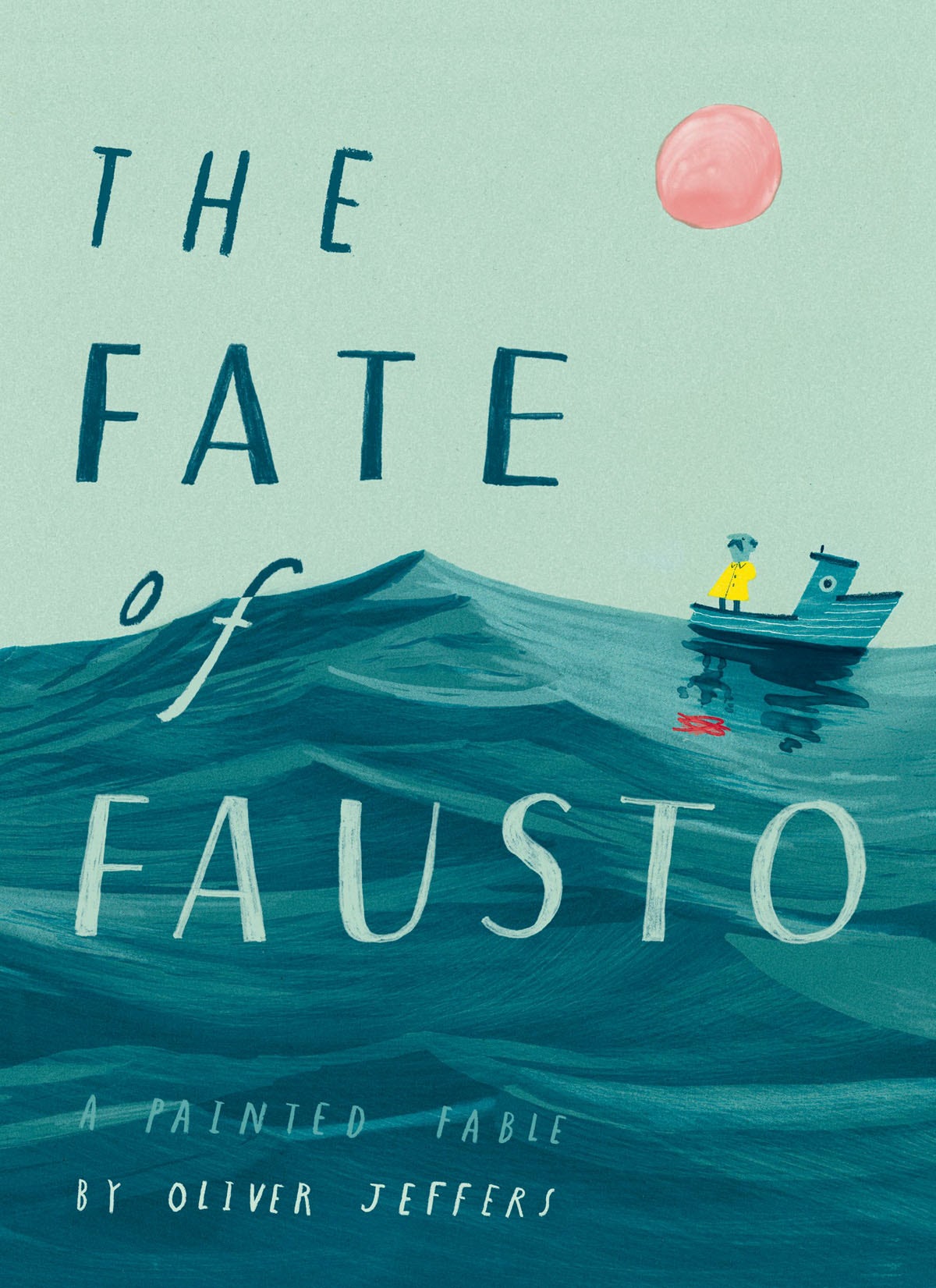 The Fate of Fausto is a cautionary tale for our times. Inspired by the sight of a storm brewing off the north coast of Ireland, Jeffers penned the tale of a man named Fausto, who believes he owns the world around him and sets off on a boat to survey his possessions.

Touching on themes from greed to power and our relationship with nature, it’s a fable which feels particularly relevant in the midst of the climate crisis and rising political tensions. 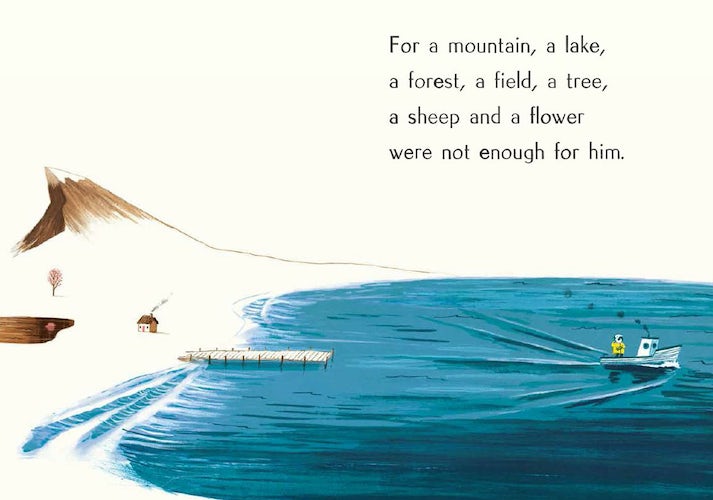 The book was a labour of love for Jeffers, who created its artwork using traditional lithographic printmaking techniques at Paris art studio Idem (a process that took several weeks). He also commissioned typographer and book designer David Pearson to typeset the book by hand.

Pearson was introduced to Jeffers by a mutual friend (artist Sam Wilson). After discussing various options, the pair decided to use moveable type for its connection with traditional printmaking and its “subtly-changing texture”, which they felt would complement Jeffers’ lithographic artwork. 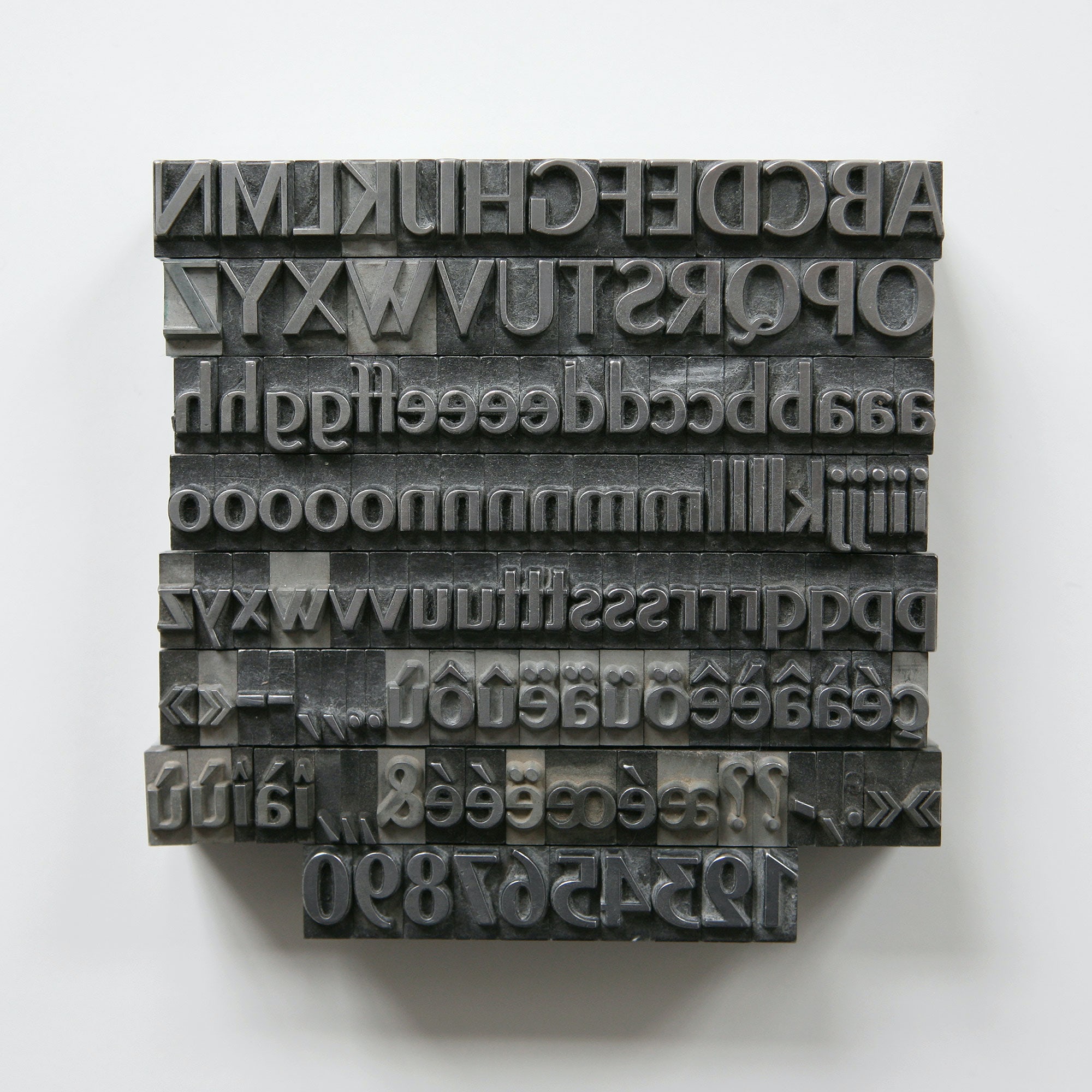 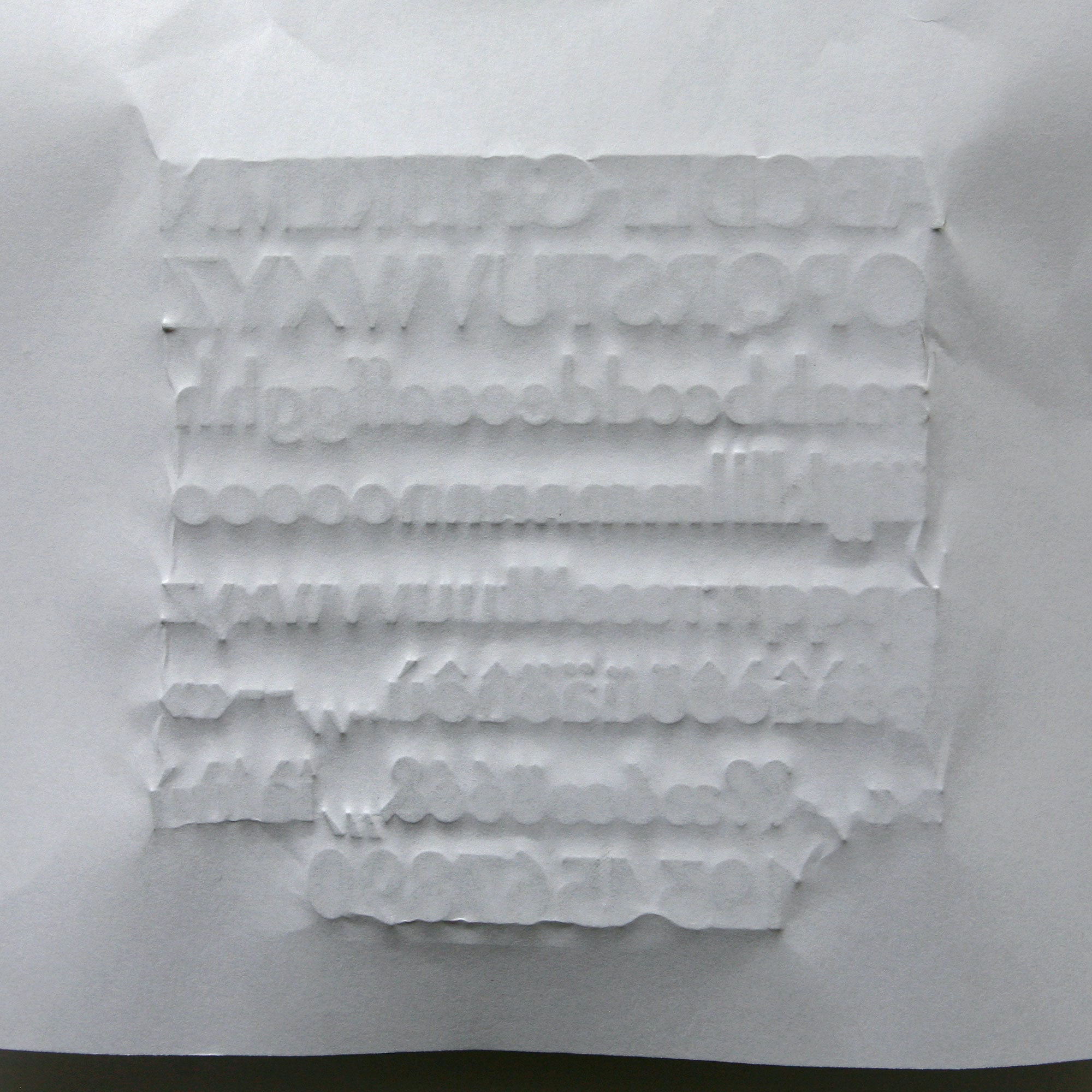 “The type was chosen to provide a simple, elemental appearance – the setting definitely has a whiff of Janet and John about it – and also for its connection to France, where Oliver’s art was created,” explains Pearson.

The type, Chambord Maigre, was created by Roger Excoffon in 1945 for Marseille’s Fonderie Olive and has an interesting back story – one which, as Pearson points out, echoes the book’s themes of greed and power.

“It is rumoured that Fonderie Olive’s Roger Excoffon saw proofs of the typeface Touraine on Charles Peignot’s desk. He then took the train to Marseille, where he quickly drew a lookalike and beat Deberny & Peignot to market,” he explains. 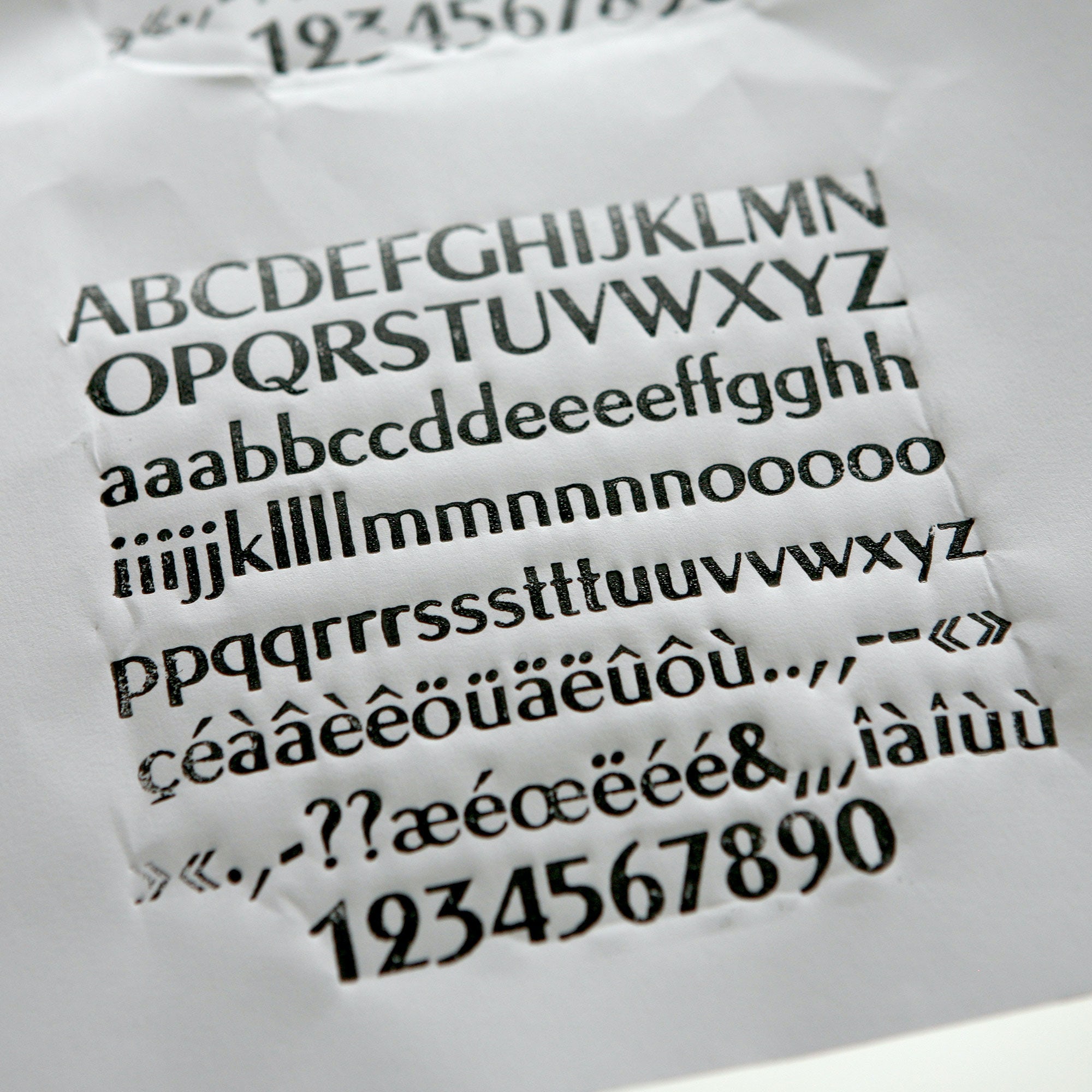 Pearson set the book using a ‘cushion’ technique – using the pressure of his hand to create “a rough-and-ready printing press”. He produced a series of hand-pressed sheets containing a full alphabet, which were then cut up and rearranged to form words and sentences, with the resulting text scanned into a computer and placed on top of Jeffers’ artwork to create the book’s final pages. It was a painstaking process – but one that adds to the book’s carefully crafted feel.

It’s a different approach to Jeffers’ previous books – which feature handmade lettering created by the author – and Pearson says the type has a different relationship with the images on the page. 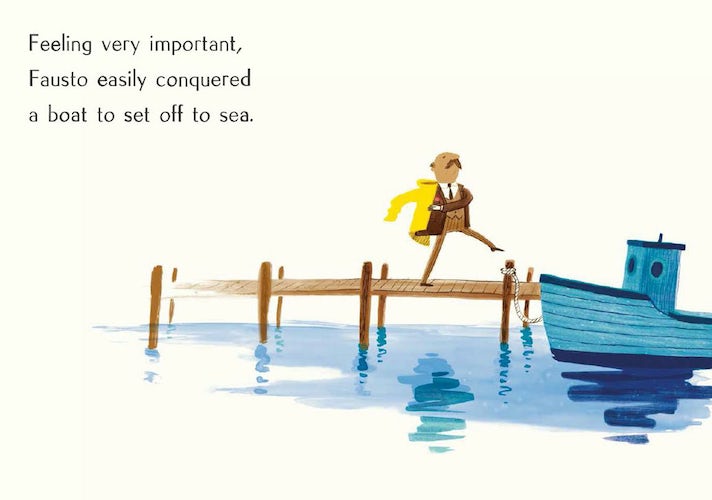 “Oliver’s hand-lettered books tend to feel much more integrated, with letter and image dancing together on the page. In Fausto, the words are standing clear of the artwork, allowing it to feel vast when it needs to, and granting small details the space they need to pull focus and feel significant.”

To mark the book’s release, London shop Sotheram’s Rare Books is hosting an exhibition in its gallery space until September 24. The exhibition offers a behind-the-scenes look at the making of the book, with Jeffers prints displayed alongside Pearson’s handset type sheets. 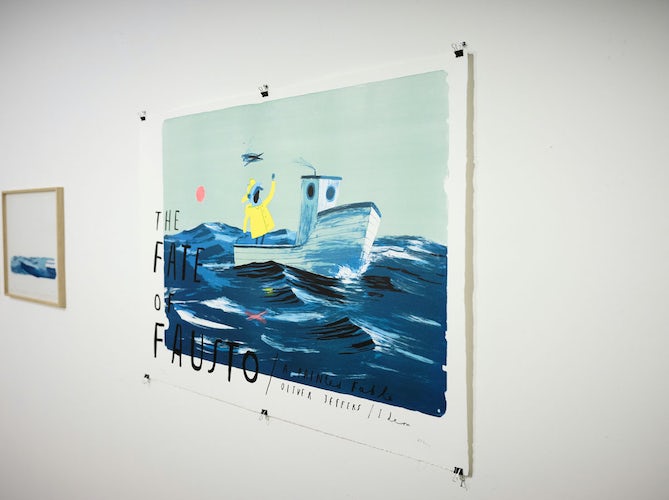 The Fate of Fausto is published by Harper Collins and costs £16.99; see more of Pearson’s work at typeasimage.com. See the exhibition until September 24; Hear our podcast with Oliver Jeffers here