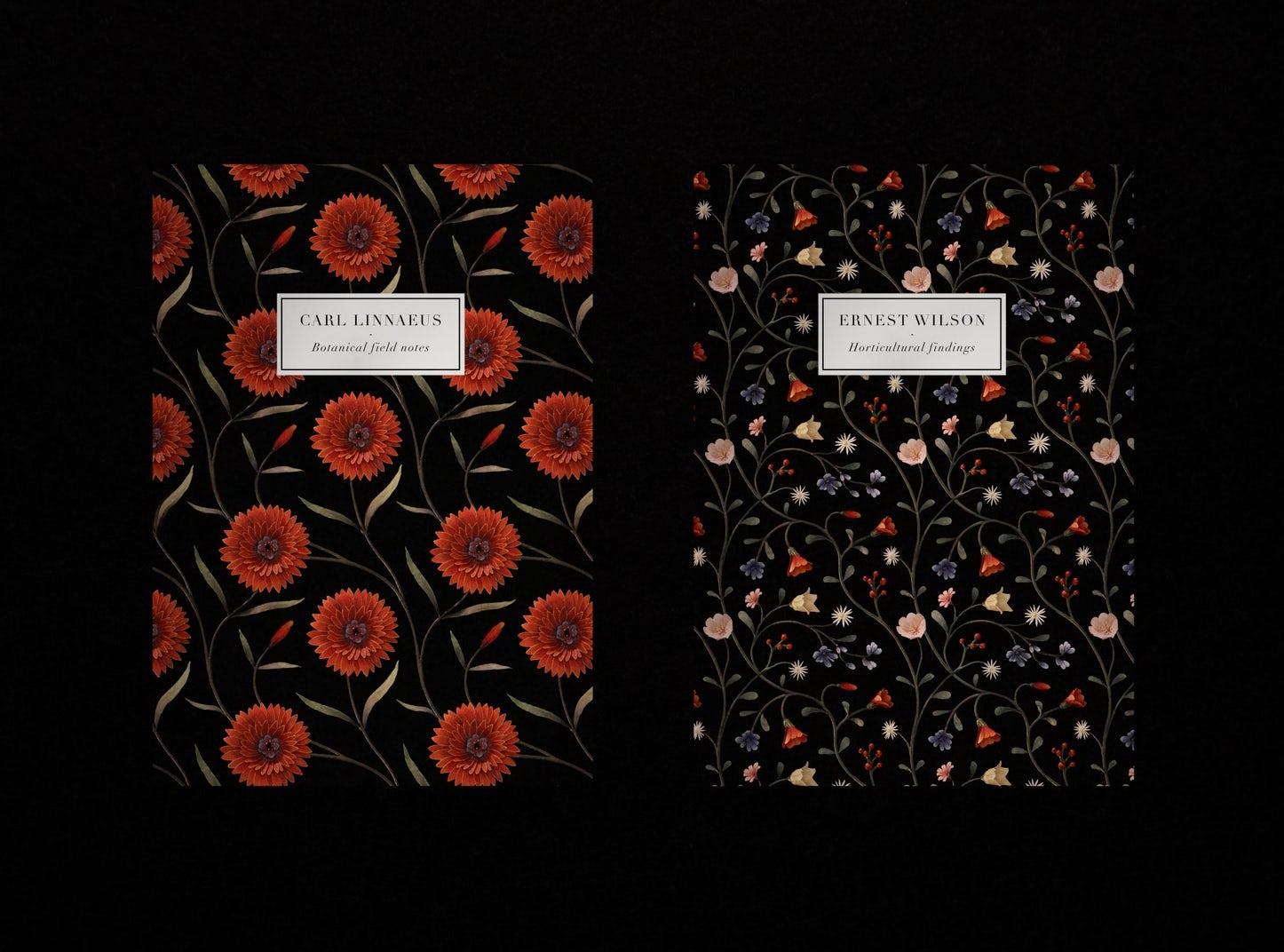 We first featured O’Meara’s work in our New Talent series back in 2017. The London-based director and animator has created films for the Tate and Sotheby’s, and recently worked as a puppet builder on Wes Anderson’s stop-motion feature film, Isle of Dogs.

For On Brief, O’Meara was asked to create an animation that would bring Papier’s products to life and highlight its focus on quality and creativity. (The brand has launched personalised products with, creatives, museums and other brands, from Matthew Williamson to Disney and the V&A.)

After an initial discussion, Papier invited O’Meara to design a set of notebooks and an animation based on his designs. “What really interested me [about the project] was making something physical that exists in the real world – something you can hold and own because everything I do ends up on a screen,” says O’Meara. “I also liked the idea that people might used the notebooks for things – to write ideas or to draw – and I liked the idea of being part of something someone else is making.” 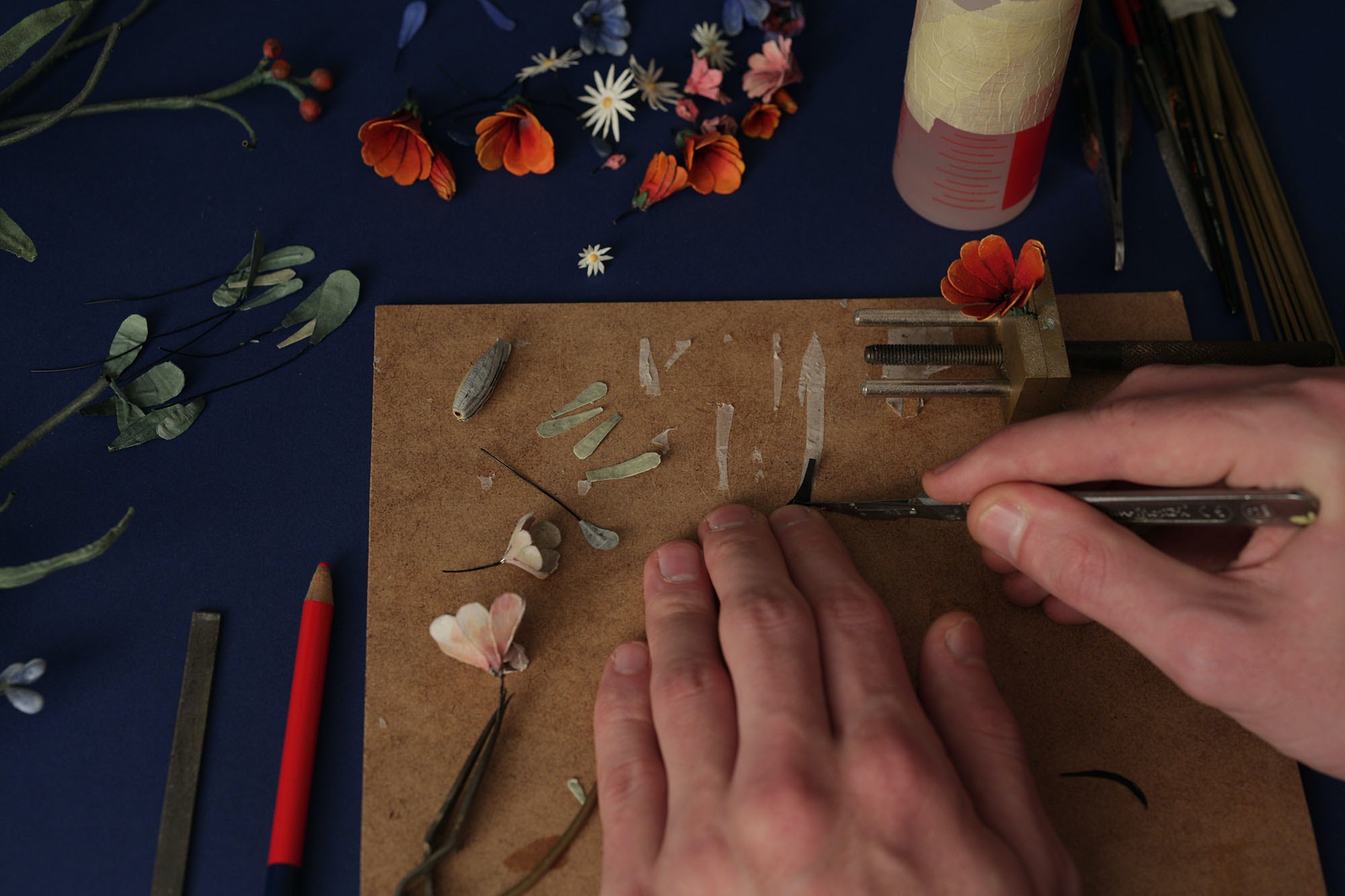 The floral design was in part inspired by Sandro Botticelli’s painting Primavera, which shows a group of figures in a garden, and vintage painted chests. The repeating designs were also informed by the requirements of the brief: “We needed to make a composition that would work, both in animation and in print, and it needed to work at lots of different aspect ratios and [films of] lots of different lengths. Repeating patterns was already part of Papier’s visual language, so it made sense to do something repeating,” explains O’Meara. “Also, [it] allows you to produce what looks like a lot of animation without a huge number of models.”

Creating the animation was a process of trial and error: O’Meara started out by sketching individual flowers and adding designs to a 2D animatic before working on the stop-motion animation.

“I couldn’t know if designs would animate into each other perfectly when I started, or if the animation would end up as an aesthetically pleasing design. For the design to work well it had to look balanced, with the same sized gaps between flowers, so it involved quite a bit of back and forth,” he explains. 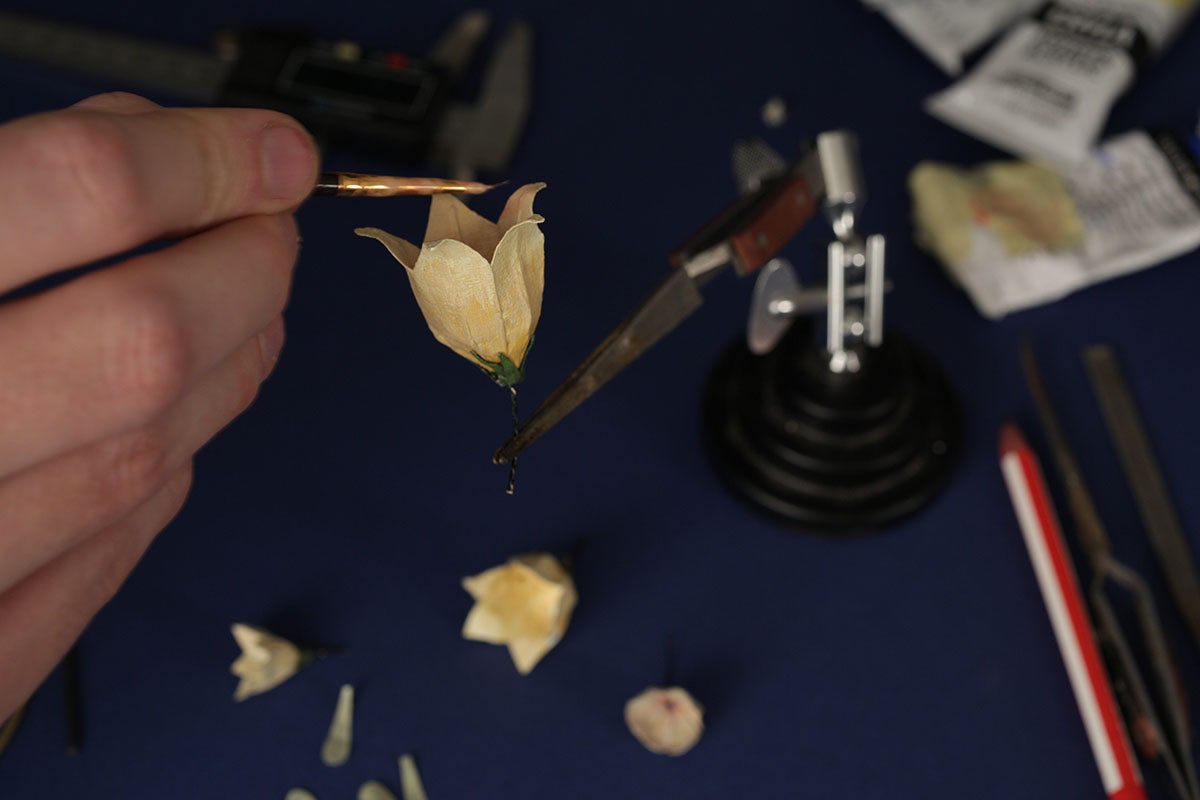 “When I started to animate [in 2D], I found some parts weren’t animating into each other properly, so I’d then go back and redesign parts of them so they would animate more smoothly. I’d do that over and over again, changing bits of the animation and the design until it all locked together.”

The floral models were created from pliable metal, which O’Meara cut, shaped and painted. “The vines were made out of copper tubing and the flowers and the leaves are made out of very thin sheet metal – a bit like very thick tin foil. This meant you could animate the petals frame by frame and manipulate their shape, which you wouldn’t be able to do with paper,” he explains. “We put ink washes on the models, because I didn’t want them to be very flat colours – I wanted people to see mistakes and textures in them.”

The animation was filmed at Clapham Road Studios in south London. Flowers were shot against a dark velvet background and the film was animated frame by frame. “We used what we call replacement frames, which means that for every frame we had a different model – starting with a small model, then a medium model, a large model and a very large one … and we’d swap those out,” says O’Meara. This footage then had to be pieced together and edited to create the final stop motion film: “Even if you’re really careful during the model making stage, you’re never going to get it so that [designs] will match up perfectly, so you have to do lots of tweaking, compositing and post-production,” adds O’Meara. 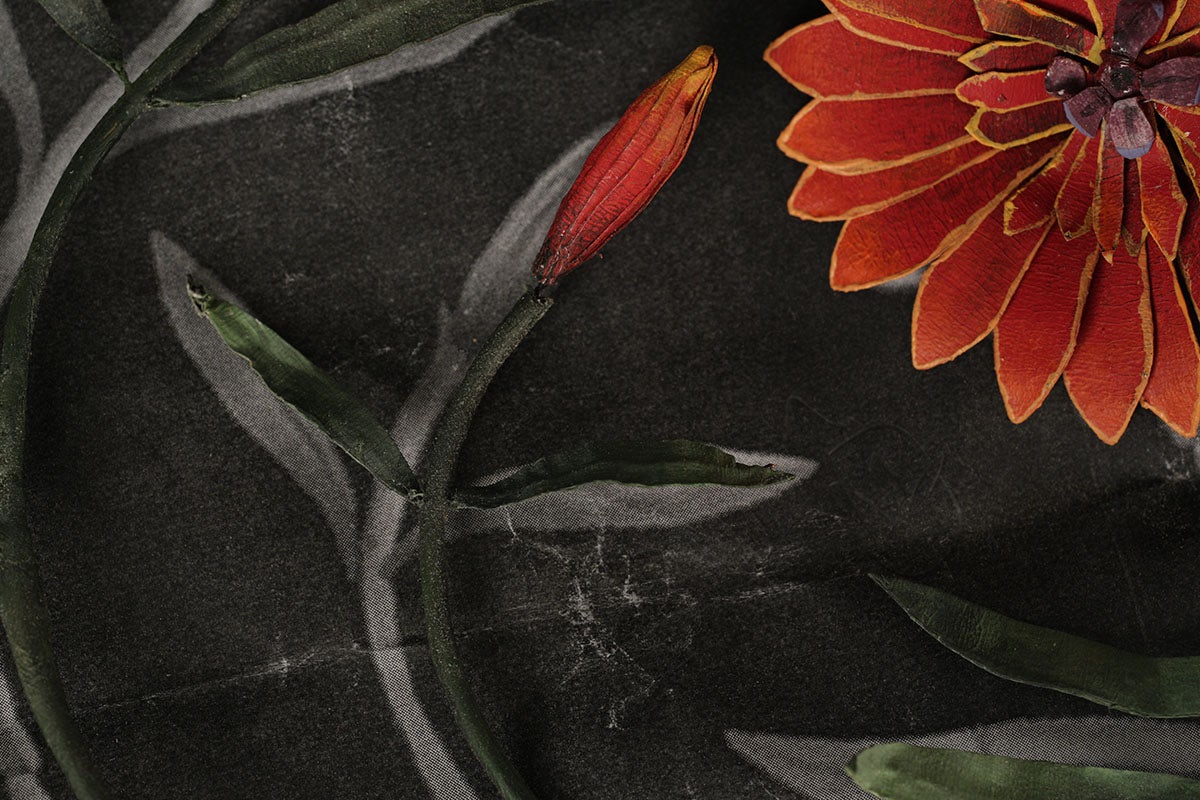 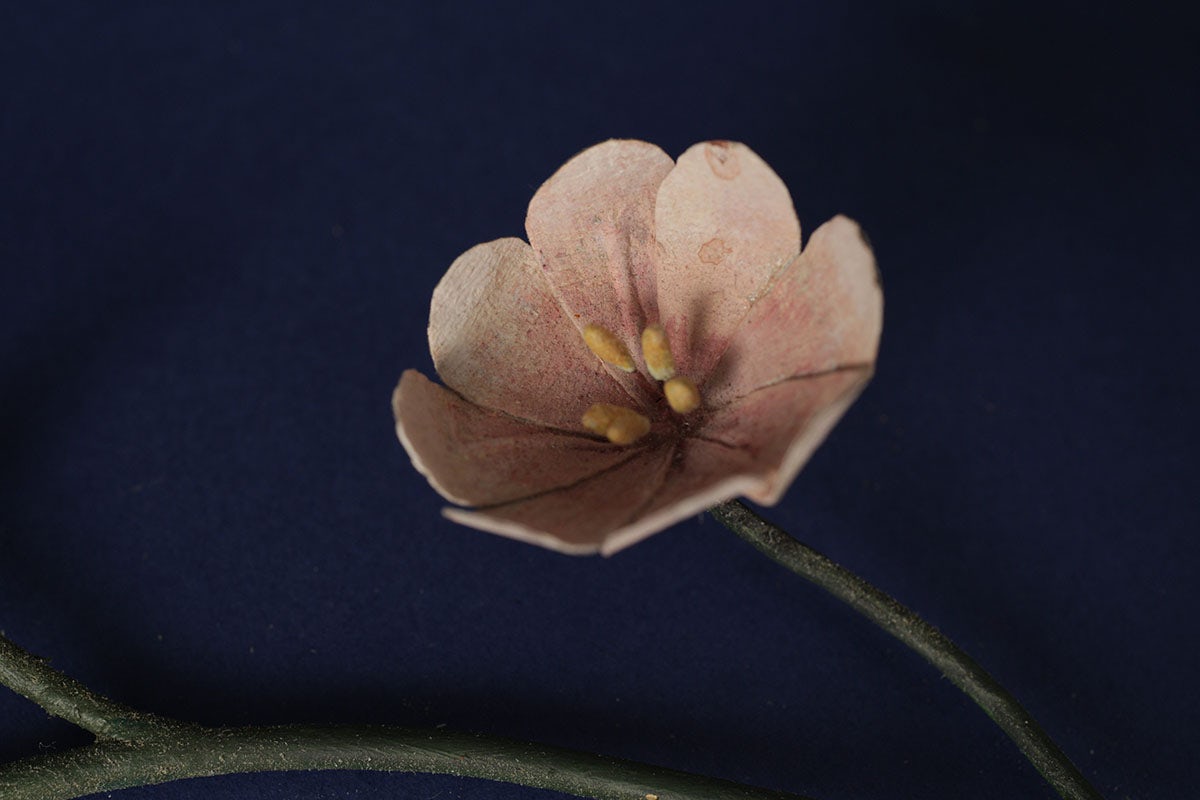 O’Meara worked with freelance sound artist Adam JB to create sound effects and music for the film, using sweet wrappers to simulate the sound of plants blooming. “I like to integrate music and score … so when the vines and leaves are growing it’s quite a naturalistic noise, but it’s more musical when the flowers open,” he says.

Papier’s Brand and Marketing Director Sophie Agar says the collaboration presented an opportunity to test out working with an external creative to produce content for Facebook and Instagram – something the brand hasn’t done before. “We do all of our own creative, so were keen to collaborate with an external [artist] to create something completely different to our usual content,” she explains.

Facebook and Instagram are key marketing channels for Papier: “Our organic profiles are key to conveying our brand aesthetic and key messages, while the paid side enables us to grow brand awareness as well as drive sales,” explains Agar.

The video will be used to drive sales of individual notebooks and visits to Papier’s website, and Agar says Papier will also be measuring engagement levels. “It will provide us with an opportunity to test how audiences respond to this type of creative compared to the ones we create in-house,” she adds.

Stop-motion can be an expensive and complex process, but O’Meara has shown that it’s possible to create handcrafted animations on a small budget, with a little patience and ingenuity. The project also demonstrates how animation can be used to bring products to life and create an engaging alternative to a traditional product shot or static image.

Working with Papier allowed O’Meara to experiment with creating repeat patterns on a larger scale than he has ever done before: “It was interesting looking at wallpaper designers and people like William Morris, and learning how he would have worked and laid out those patterns,” he adds.

He credits Papier with giving him time and freedom to experiment, and recommends other brands do the same when working with external creatives. “The creative process can take longer than people expect – if you want a really exquisite piece of design or illustration, then giving people time and space is really important. Some people have a bit more of an immediate process than me, but leaving a little time and space for artists to make things is really important – that, and [giving them] trust,” he says.

On Brief is part of Inspire, a partnership between Creative Review, Facebook and Instagram to showcase outstanding creative work on both platforms. Creatives are paid for their involvement in On Brief and are not asked to produce speculative work – only a rough outline of their ideas – at pitch stage. For more content from our Inspire partnership, see creativereview.co.uk/inspire